Pictures of the iPad were all over the Internet after Steve Jobs announced it earlier this year, but how does it look in the flesh?

The design is minimalist and unmistakably Apple. Since it uses a touchscreen virtual keyboard, there's only four physical switches - a single “Home” button that returns users to the main menu, a volume switch, a wake/sleep switch and a rotational lock switch that prevents the display from rotating.

Some have complained about the bezel as being too large, but it actually looks fine and we never once found it an eye sore. In fact, the large bezel actually helps you handle the iPad better and prevents you from accidentally touching edges of the screen when, for example, reading e-books.

And then there's the large 9.7-inch IPS LCD screen, which is simply gorgeous. The screen outputs a resolution of 1024 x 768 pixels and image quality is top notch - sharp and clear with rich colors. The iPad doesn't feature E Ink, but using it to read e-books was never a problem (more on this later).

Weight is crucial for a product that prides itself on portability and the iPad manages this well, weighing in at a manageable 680g. Holding it, you'll feel the iPad's considerable heft, but it's manageable and never overwhelms you. In fact, its weight gives it a feel of sturdiness and solidity.

Overall, the iPad, much like other Apple products, oozes sex appeal and will likely turn heads if you were to whip it out while on the train ride to work. 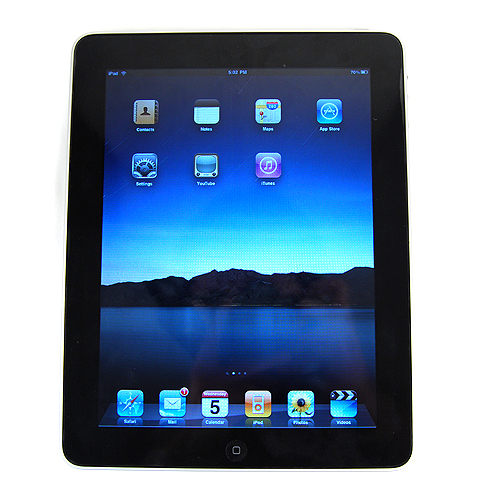