All in on Apple Silicon

An old saying goes, “If you want to go fast, go alone.” And Apple has certainly proved that when it announced that Macs would transition to Apple’s custom silicon. As we all know by now, that move was a breakthrough. M1 was Apple’s first custom processor and never in my years of writing about notebooks have I seen a processor that’s so powerful and efficient. In my review, I said it rewrote the notebook rulebook. So what did Apple do next? Naturally, it took the M1 chip and put it in the iPad Pro.

If there was anything that last year’s iPad Pro didn’t need more of, it was power. Even though its processor is based on a design from 2018, it’s still mighty fast and it continues to run rings around the competition. And get this, Apple is claiming the new M1 iPad Pro to offer up to 50% faster CPU performance and up to 40% faster GPU performance over last year’s model. That’s like adding ghost peppers to a very spicy mala dish or another 1,000hp to a Bugatti Chiron – you get the idea. 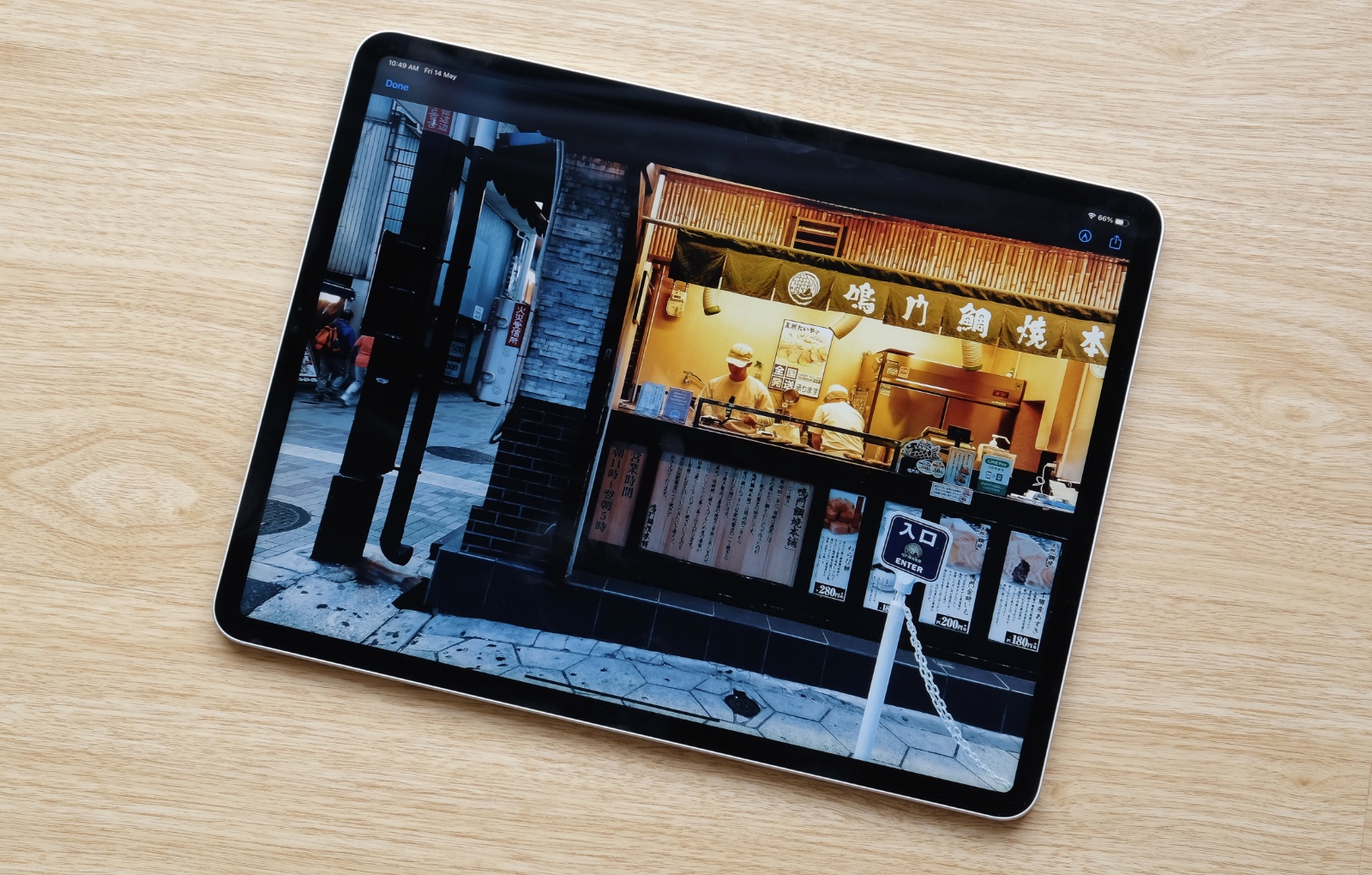 I know some people are hoping for a redesign since the iPad Pro has looked the same since 2018 when it underwent a massive overhaul. It still looks nice though I would have preferred a redesigned chassis with squared-off corners to bring its overall aesthetic in line with the new iPhones and iMac.

At any rate, the iPad Pro is still available in two sizes: 11 and 12.9 inches. They have flat sides, curved corners, and look pretty much like thin slabs of glass. The new 11-inch iPad Pro even has the same dimensions as last year’s model. The buttons and ports are all in the same places. 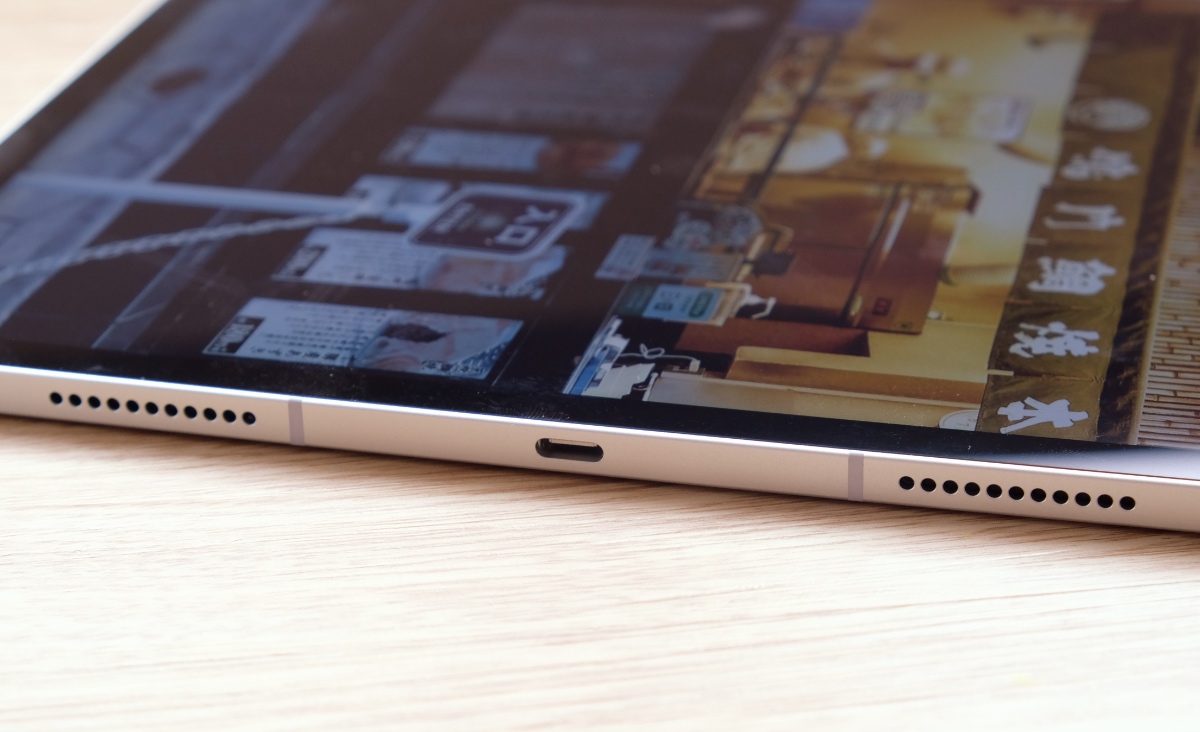 The larger 12.9-inch model, on the other hand, is 0.5mm thicker and about 40g heavier because it has a new type of display. Although you don't notice it in your hands, the added thickness means it might face compatibility issues with some accessories, especially if the tolerances are tight. And although Apple said the new model might not fit the Magic Keyboard it designed for last year’s 12.9-inch iPad Pro, I got my unit to fit with no issues. It looks perfectly fine even when it closed. However, your mileage might vary.

The 11-inch model, however, will work with and fit all existing accessories. Both iPad Pros still have the same magnetic mount on their sides for users to pair and charge second-generation Apple Pencils. 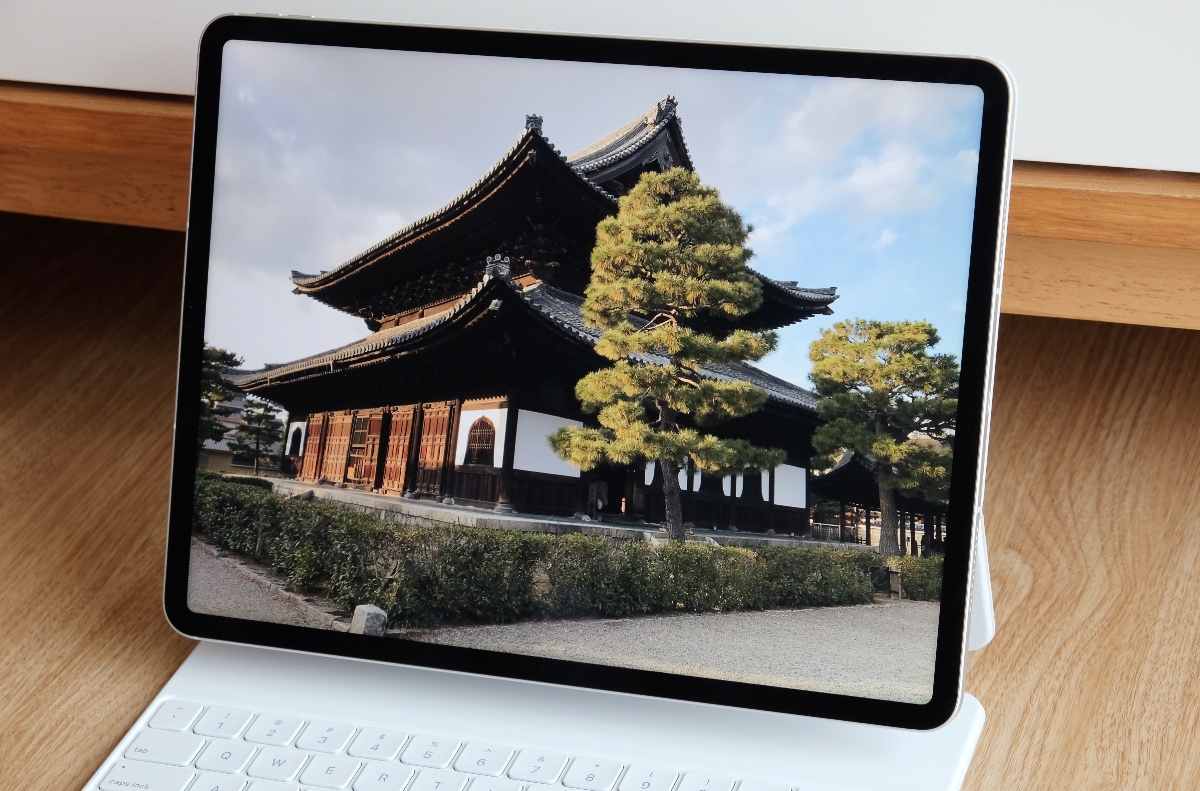 The 12.9-inch iPad Pro features a new Liquid Retina XDR display. The XDR suffix is only applied to Apple’s best displays and the 12.9-inch iPad Pro’s display is supposed to mimic the performance of the Pro Display XDR. It uses mini-LED technology and relies on over 10,000 tiny LEDs behind the display to provide more precise lighting. With this, Apple claims 1,000 nits of full-screen brightness and 1,600 nits of peak brightness when viewing HDR content, and an amazing 1,000,000:1 contrast ratio. Resolution is unchanged at 2732 x 2048 pixels and the display continues to support Apple's display technologies like True Tone and ProMotion.

It goes without saying that this new Liquid Retina XDR display is an outstanding one. Visuals are razor-sharp and colours look vibrant and lifelike. But to my eyes, I’m not seeing much of a difference between it and the last-generation iPad Pro. Regardless of emails, surfing the web, typing this review, or the occasional YouTube and Netflix, the two are almost indistinguishable from each other. In fact, if I had to nitpick, I think I prefer the very slightly warmer tones of the old iPad Pro. 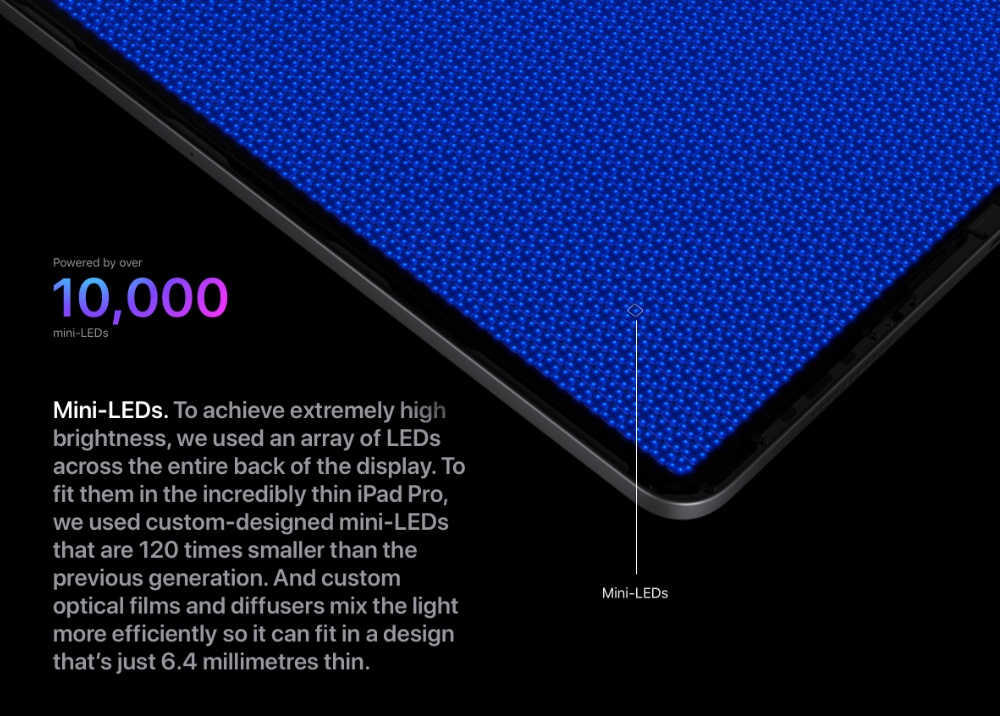 That said, there are apparent differences when you view specific HDR content. It's more obvious in some images and less so in others. But with the right content, the new iPad Pro's Liquid Retina XDR is noticeably more vivid and contrasty. There’s greater dynamic range so you see a greater range of shades between the brightest whites and deepest blacks. I’m sure some professionals will appreciate this, but for casual users who spend more time replying to emails, typing documents, and watching videos, I think this new display’s capabilities will be largely unappreciated. And I don’t mean that as a disparagement of the new Liquid Retina XDR display. On the contrary, the Liquid Retina display of last year’s iPad Pro remains to be very good.

Here are some samples that I tried to capture with my camera. The differences are best appreciated with your own eyes but hopefully this will give readers an idea of what to expect. 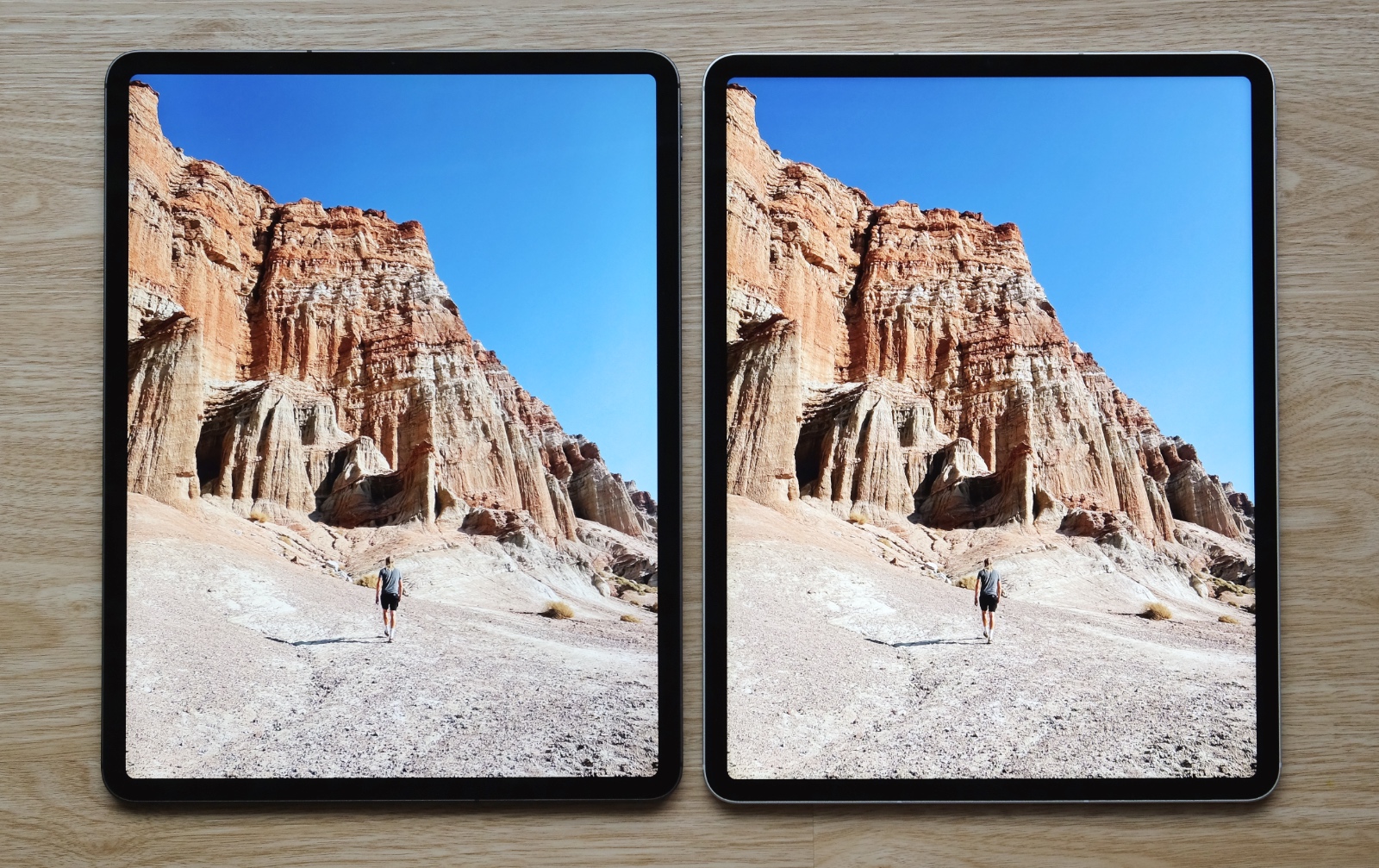 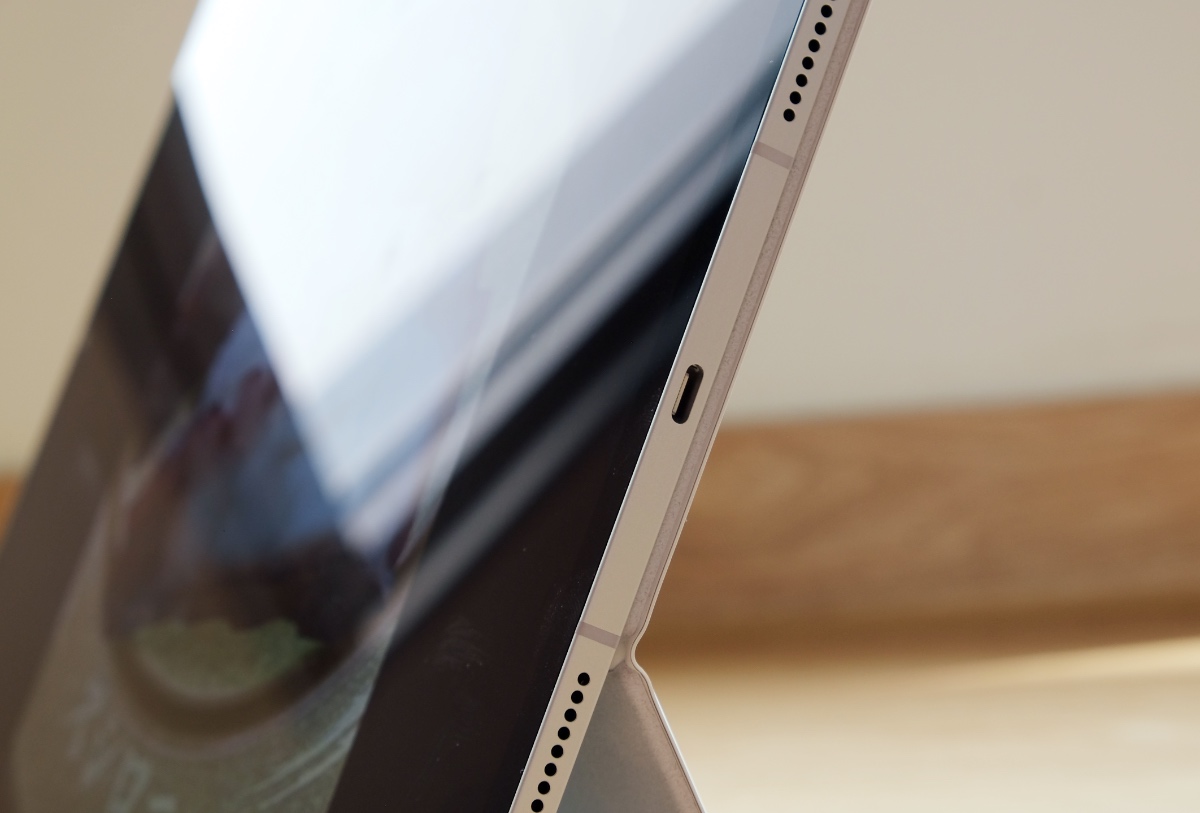 As befits Apple’s greatest tablets, the new iPad Pros are the first iPads to support 5G connectivity. My opinions on 5G hasn’t changed. Though 5G is irrefutably faster, its patchiness, combined with our already excellent 4G performance, means it isn’t a killer feature. At least not until the really fast version of 5G – mmWave – becomes commonplace here.

I tested the iPad Pro's 5G performance briefly using a Singtel-supplied SIM card and it was no contest – 5G was nearly twice as fast in both download and upload.

The newest iPad Pros are also the first iPads to have a USB-C Thunderbolt port. The benefits are numerous. The fast 40Gbps bandwidth aside, the Thunderbolt port also lets you pair these new iPad Pros with high-end Thunderbolt accessories like docks, external storage, and displays. It’s a much more versatile port. 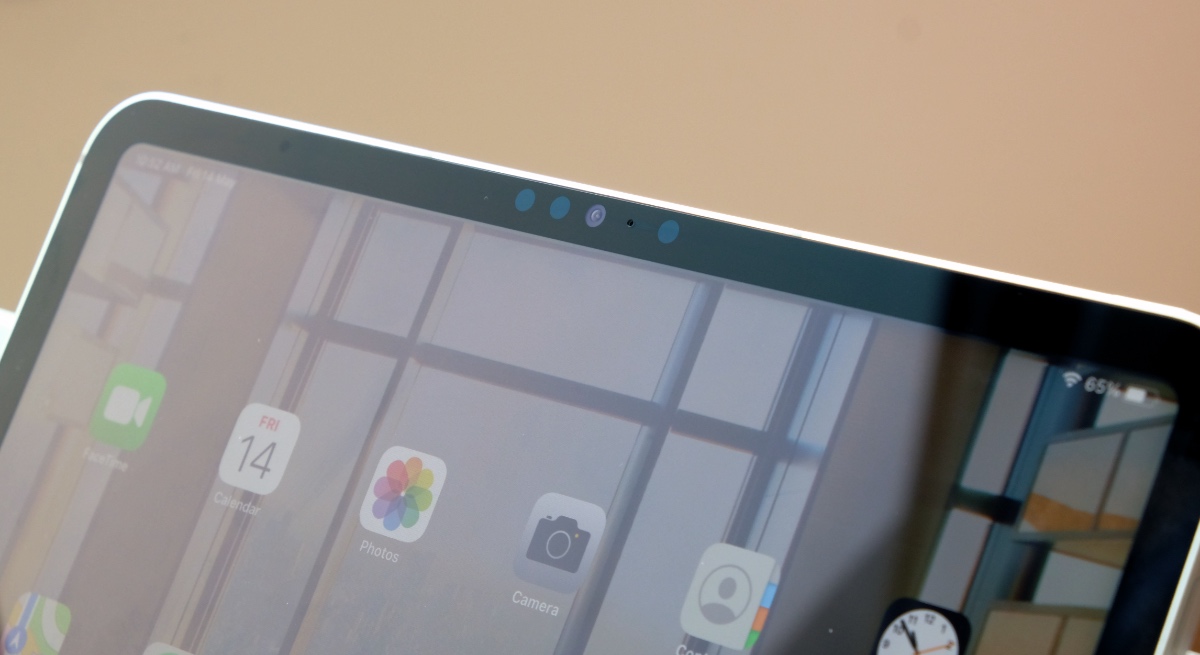 The front-facing TrueDepth camera has also been upgraded. It now has over 70% more resolution (12MP up from 7MP) and a wide 122° field of view. The wide field of view enables a new camera-tracking feature called Centre Stage. Using machine-learning and taking advantage of the wide field of view, Centre Stage tracks subjects and keeps them in the middle of the frame even as they move about. And if someone else joins in on the call, it’s intelligent enough to zoom out and reframe itself.

In practice, what’s really happening with Centre Stage is that the iPad Pro is using its wide field of view and automatically zooming and cropping into the subject, and adjusting as it moves around. The resultant footage has the same field of view as last year's iPad Pro. In other words, the camera isn’t physically panning – so if you keep moving in one direction, it’s possible to move entirely out of frame. Still, I can foresee it being an invaluable tool for virtual presentations. Happily, Centre Stage isn’t limited to just FaceTime, Apple is allowing teleconferencing apps like Zoom and Webex to take advantage of this feature too.

But because what we are seeing is a crop, I do find that image quality isn’t significantly better when compared to the last-generation iPad Pro. If the lighting is challenging, images can look noisy. Still, the M1 chip's image signal processor appears to be more adept at adjusting white balance and tones so colours look more natural. 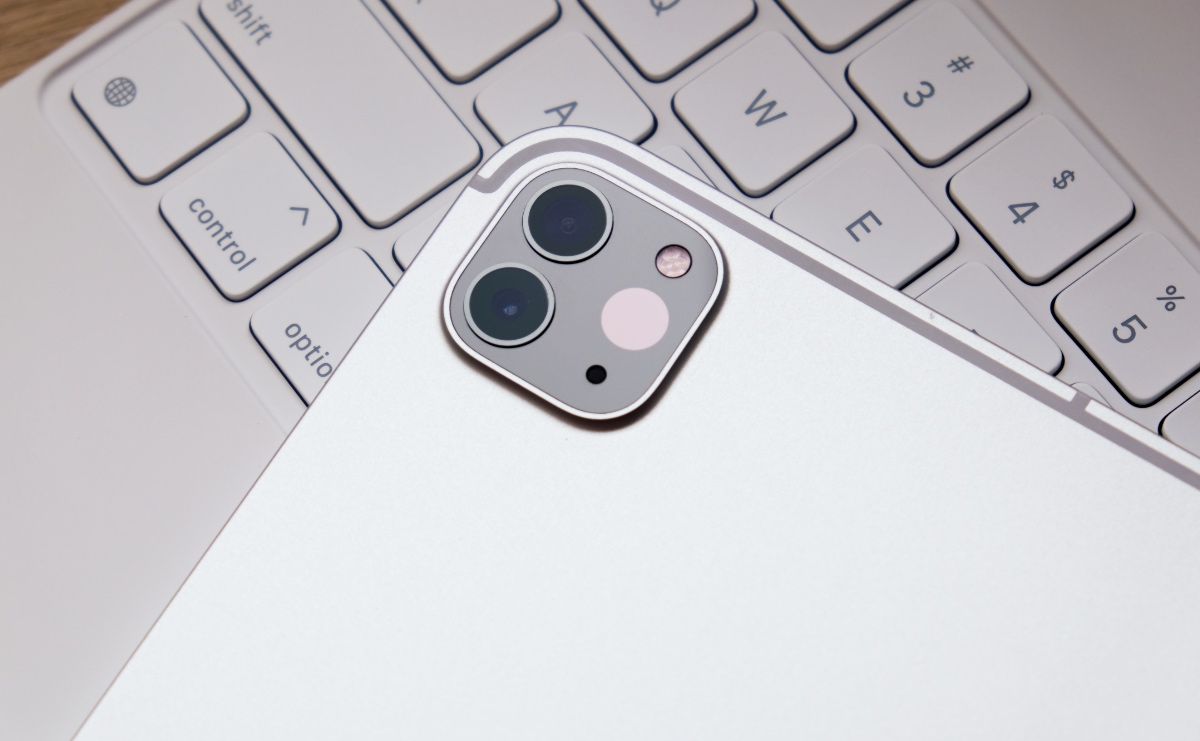 The rear cameras are the same, so you have a 12MP f/1.8 wide camera, a 10MP f/2.4 ultra wide camera, and a lidar sensor that’s handy for AR applications. Image quality is indistinguishable from last year’s iPad Pro. 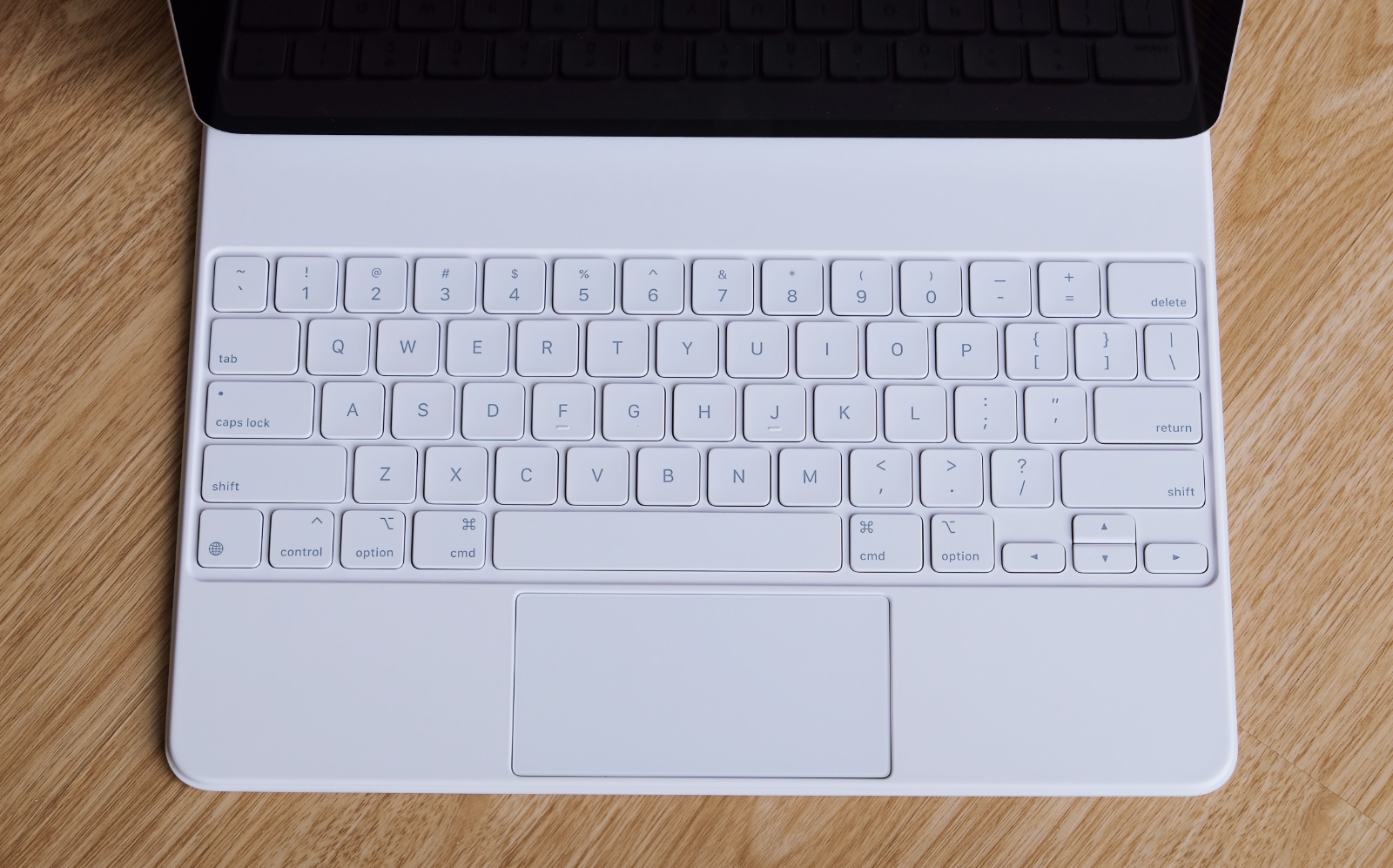 Finally, Apple also released a new white version of its Magic Keyboard for iPad Pro. Functionally, it's identical to the last year's version except that it comes in white. It's fantastic to type on and the trackpad is nearly faultless. But as good as it looks with the silver iPad Pro, I have concerns about keeping it clean. I've only had it for a few days and I haven't been going out (hello Phase 2 Heightened Alert) but I've already got some stains developing that won't come off without significant elbow grease. If you really have to go with white, I suggest decorating it with stickers.