The iPad Air comes with the same 5-megapixel rear camera sensor with f/2.4 aperture, five-element lens, backside illumination and a 1.2-megapixel FaceTime HD front-facing camera as the iPad 4. For a gauge of its image quality, do check out our iPad 4 review.

The iPad Air is the second product in Apple's line up to sport the new A7 dual-core processor which is based on 64-bit architecture, and M7 motion co-processor. The processor's clock speed is slightly faster at 1.4GHz compared to 1.3GHz in the iPhone 5S.

We'll be comparing the iPad Air against the iPad 4, as well as a few flagship Android tablets with high resolution displays. It's worth noting that the iPad Air has 1GB of RAM, compared to 2GB that's now common in Android devices. The GPU in the A7 SoC is the quad-core PowerVR (Series 6) G6430.

The iPad Air completed the SunSpider Javascript 1.0.1 benchmark in just 390ms, which is by far the best performance of all mobile devices we've tested. For reference, the iPhone 5S managed to complete this same test in 414.8ms, which is inline considering that they both use the same hardware, but the iPad Air is rated to operate at a higher clock speed. Further to that, its benchmark performance is nearly twice that of the iPad 4! In actual usage, web browsing was found to be fast and extremely responsive.

Originally developed as a PC benchmarking tool, 3DMark is now expanded to support multiple platforms, including iOS. Its Ice Storm benchmark is based off the OpenGL ES 2.0 API and is designed for smartphones, mobile devices and ARM architecture compute devices. It includes two graphics tests designed to stress the GPU performance of your device and a physics test to stress its CPU performance. 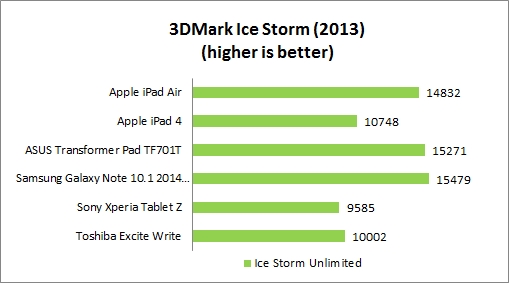 Even though the iPad Air runs on a dual-core 1.4GHz A7 chip, it is almost on-par with the quad-core ASUS Transformer Pad TF701T and Samsung Galaxy Note 10.1 2014 Edition. Certainly it has the chops to compete with the best in the industry for entertainment or productivity needs.

One of the key concerns we had about the iPad Air is its battery performance. With a slimmer, lighter and smaller form factor, how is Apple going to squeeze in enough juice to maintain its claims of a 10-hour battery life? Indeed the specs comparison listed on the earlier page list the iPad Air with a 8,827mAh battery capacity whereas the iPad 3/4 have a beefier 11,560 battery capacity. We put it to the test to find out if the improved hardware negates the reduced battery capacity of the iPad Air.

Well, our worries were completely unfounded as the iPad Air lasted 20 minutes longer than the iPad 4 despite having a smaller battery capacity (8827mAh vs. 11,560mAh). As noted in our iPad 3 review, Apple's tablets are no longer the most power-efficient anymore due to the nature of its Retina displays. DisplayMate's analysis reveals that there is an estimated  72 to 82 backlight LEDs on the Retina display, which drain power faster at full brightness.

If we take a look at the Power Consumption chart, the iPad Air registered lower power consumption compared to the iPad 4. In fact, it has improved drastically to rank second position among the tablets compared. It seems that the new processing hardware is more efficient, thus bringing about battery life efficiency improvements.

Readers who've been following the above chart comparisons closely, we bet you must be wondering why the ASUS tablet is able to outlast the competition with a much more compact 7,000mAh battery capacity. ASUS managed to achieve this low level of power consumption because it uses an IPS screen that's based on an IGZO-TFT manufacturing technology. We reported ASUS using this display technology in a recent news piece. The other comparison tablets still use conventional display technologies and thus you can see most of them sip power at a similar level.

So does it live up its namesake? To some extent, yes. However, it's not yet a game changer like the original MacBook Air. Perhaps it has something to do with its timeliness of arrival and Sony's engineering prowess that would have otherwise made the iPad Air, a truly outstanding product.

Nevertheless, the iPad Air comes at the time when Apple needs it to stay a step or two ahead of the competition. It's able to serve up just enough goodies to entice customers to upgrade (for existing iPad users) or purchase (for first time tablet buyers or Android users). However, consumers today are faced with a dilemma - which 10-inch tablet should they buy? So what are the pros and cons of each tablet? We'll quickly discuss these aspects against some of the popular contenders right after the photo break and iPad Air pricing table:- The Samsung slate offers a micro-SD card slot, a higher resolution display and a truckload of software features that are optimized for use with its S Pen for $10 lesser than the S$1,008 iPad Air (32GB, 4G LTE). If drawing and doodling are what you plan to do on a tablet, then the Samsung slate is a better choice for both entertainment and productivity tasks as a whole.

Although we've reported that the Sony Xperia Tablet Z (16GB, LTE) retails at S$998, its new suggested retail price in recent times is S$888. For just $18 (compared to the S$870 iPad Air with 4G LTE), you get a water/dust proof package with microSD card support and the thinnest chassis for a 10-inch tablet. It really depends on how you intend to use your tablet and which OS camp you prefer. If you would like to have a more 'rugged' tablet that can withstand the elements of weather and accidental spills, the Xperia Tablet Z will address your concerns. However, the iPad Air offers a higher resolution display and much better battery performance. If you're still on the fence, we would suggest trying both devices at retail stores to make an informed decision.

The Excite Write may save you S$109, but what you get in return is sluggish performance, an uninspiring design and no 4G LTE support. It may still appeal to a niche group of consumers who want to load a lot of multimedia files on their tablets as the Excite Write supports microSD cards up to 128GB in capacity (thus having a grand total of 160GB of storage). It also has a higher resolution display and wireless 802.11ac support. If general usability and performance is much more important, the iPad Air wins hands down.

For consumers who want the ultimate productivity tablet on the go, the ASUS Transformer Pad TF701T fits the bill with its keyboard dock which is included as part of the package. The keyboard dock allows you to work on documents comfortably and also extends your battery life beyond the built-in battery of the tablet. It also boasts a higher resolution display and has a comparable build quality as the iPad Air. If you're looking at the big picture and want the most versatile and value for money option, the ASUS Transformer Pad TF701T can easily be the better choice.

So Why Apple iPad Air?

After going through these compelling alternatives to the iPad Air, are there still reasons to choose the iPad Air? Granted the naysayers among you will agree that apart from the design overhaul and new hardware internals, the iPad Air still doesn't do or offer anything more than what the existing 4th generation iPad can muster. Yes, our performance benchmarks are all in favor of the new iPad Air, but you're not getting any worse an experience on the existing iPad either.

Still, we'll have to point out that the iPad Air is a crucial update to keep up with times and the untapped potential that its new processing hardware might offer in the future as more apps are churned out to capitalize on its new processing throughput. Already Apple's own redesigned iLife apps are seeing the fruits of the new hardware from real-time preview of advanced effects applied in iPhoto and iMovie, while GarageBand is able to process and mix double the number of tracks than compared to a device running previous generation hardware. Meanwhile, the overhaul of its physical design was a long time coming and embodies the constant improvements that come along with all new geek gadgets to make it ever appealing to the masses. Slimmer, lighter and more powerful - what's not to dislike? They certainly make all the salient points of the 4th generation iPad even better. Here are few more points to munch on:-

If you're convinced to go the iPad Air route, do consider getting the highest storage capacity you can afford.  The difference in price you pay for the larger capacity editions gets you more storage for a lower cost per gigabyte. We say, go for the 128GB edition if you can - especially if you are a media junkie.

Not quite sure if you should make the upgrade to the iPad Air? Also, don't forget that the new iPad Mini with Retina display is on the way, which is identical to the iPad Air but in a far more portable form factor. For those considerations and more we've a dedicated article to help this group of users make a better informed decision.

Write a Review
Compare This | Specifications
Thinner and lighter design
Good handling
Excellent performance
Super-smooth iOS 7 and new iLife and iWorks apps user experience
Lots of potential from 64-bit A7 processor and M7 motion coprocessor
Not a game changer (yet)
Premium price
Our articles may contain affiliate links. If you buy through these links, we may earn a small commission.
Sponsored Links