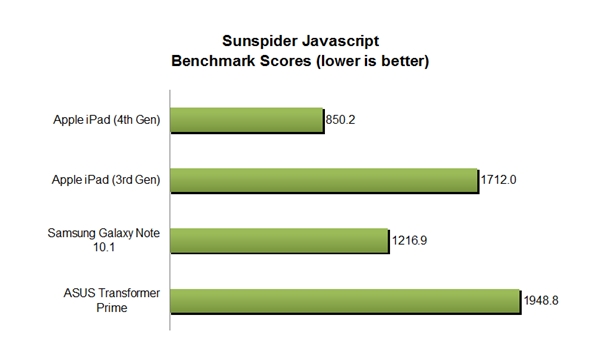 There's a good jump in the SunSpider Javascript performance from 1712ms to 850.2ms - that's slightly over twice as fast as the 3rd-gen's result and takes first place among the tablets used for comparison. Otherwise, the quad-core Samsung Galaxy Note 10.1 came in a close second with a timing of 1216.9ms.

Benchmarks aside, we had no complaints about the actual web browsing experience on the new iPad (as well as the older edition). Do note that Flash-enabled websites are still forbidden grounds for iOS devices in general.

As we all know, no existing tablet in the market comes close to having the 3.1 million pixels that is on the display of the iPad 3 and now, the 4th-gen iPad; the visual experience is thankfully retained on the new iPad. Just to refresh your memory, here's a comparison between the screen resolution of the iPad 3/4 and the iPad 2: You can check out our detailed article on the Retina display where we show you the differences in display clarity and quality. Otherwise, revisit this video as it will shed some light on how much of a difference it makes to the naked eye:

As mentioned earlier, the new iPad comes with an improved 1.2-megapixel FaceTime front-facing camera, which is an improvement over the front-facing FaceTime 0.3-megapixel camera in the iPad 3. Let's check out how both fared against each other. 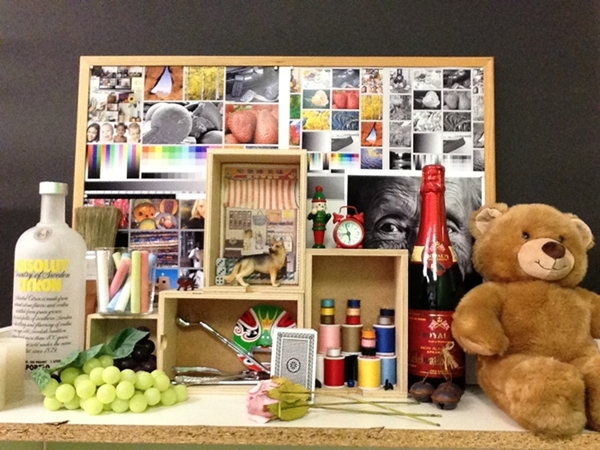 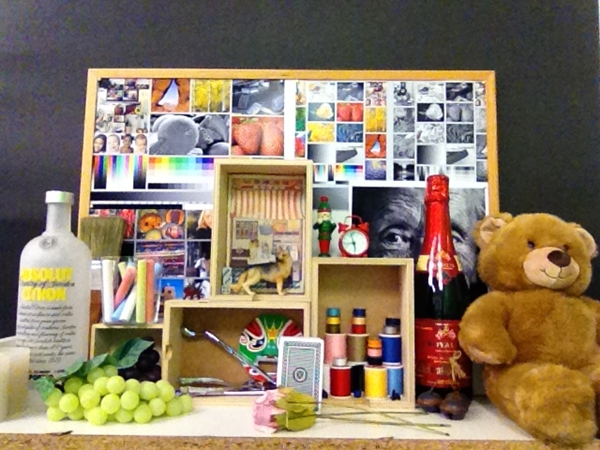 The upgrade from 0.3- to 1.2-megapixel is visible to say the least, showcasing less noise, less color distortion and higher levels of details and clarity. But will it make a big difference when it comes to FaceTime usage? We doubt it would make a very big impact even though there's visible improvement of video quality. The more important question is if it's a feature that's often used on an iPad?

Of course, better front-facing camera performance as an option is definitely a plus point but in this case, we don't think it's that big of an improvement. Also, some tablets in the market already come with 1.2-megapixel front-facing cameras so this isn't a big leap in technology either. 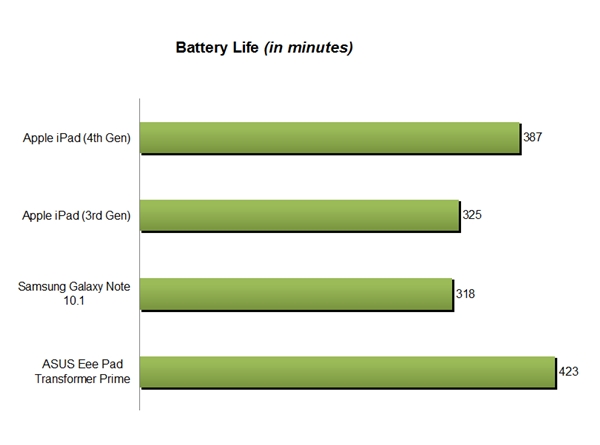 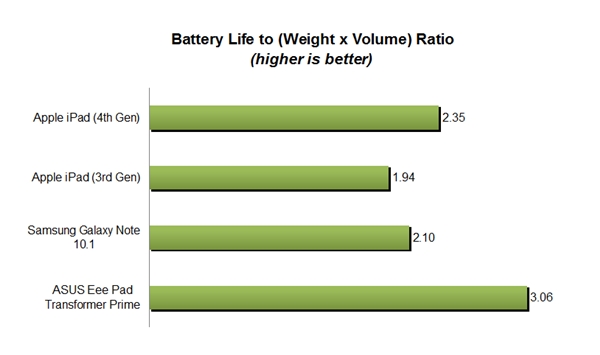 The decision to go with a high resolution display has previously cost the iPad 3's battery performance, allowing it to last four hours shorter than the iPad 2. Of course, with similar hardware specs, we weren't expecting the iPad (4th gen) to fare any different. In this case, the latter outlasted the former by about an hour at a grand total of 387 minutes. It is heartening news that at least the battery life on the latest iPad iteration is better than its predecessor. Given that the iPad (4th gen) comes with a more powerful and possibly, more power-saving A6X chip and runs on iOS 6 as well, these upgrades might have caused it to perform better, battery-wise.

Because of its better battery life, it fared better in the portability index as well, gaining second place behind the ASUS Eee Pad Transformer. Unsurprisingly, the iPad 3rd-gen came in last.

Of course, reducing its brightness and volume will result in an increased battery mileage like it did on the previous iPad. With regular surfing on Wi-Fi, occasional video and audio consumption, the tablet managed to last for a good two days or so. 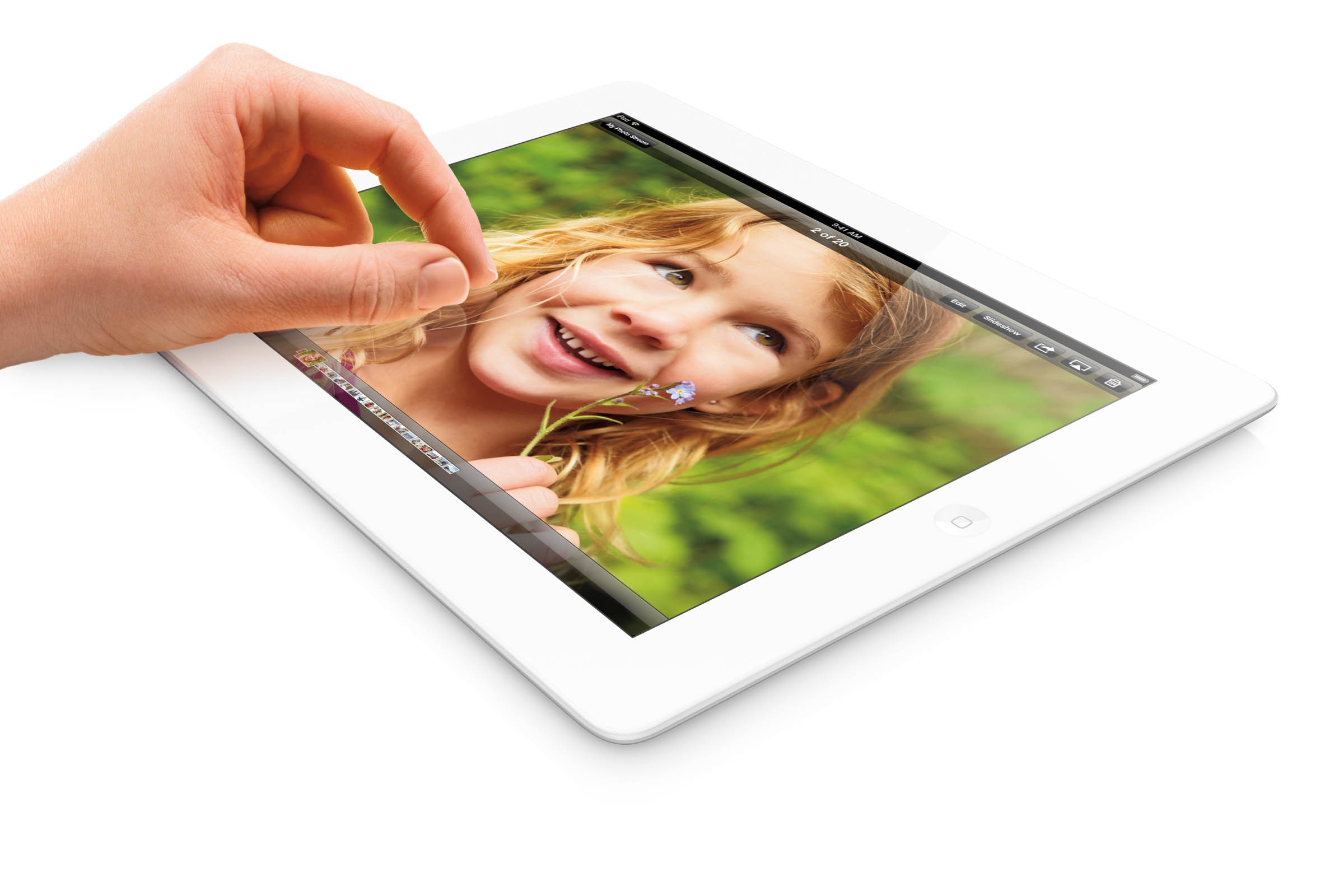 The latest Apple iPad isn't meant to be a revolutionary update to its hugely successful predecessor - well, how could it be, given the mere 7-month difference in launch dates? All that's been waxed lyrical about the 3rd-gen iPad is now old news on the 4th-gen iPad (as you know, it is now known as the iPad with Retina Display on Apple stores) - even the astoundingly clear Retina display is just, well, taken for granted and is now an expected feature. Of course, with the introduction of a product so similar to its predecessor, it's no surprise that the 3rd-gen iPad has since been phased out, with the iPad family clearly split into three options, 7.9-inch and two 9.7-inch models (the non-Retina display iPad 2, and the Retina display 4th-gen iPad).

Granted that Apple has little reason to change its successful tablet product, we were expecting perhaps a little more innovation brought to the plate with the latest iPad iteration. That's not to say that it's not one of the best tablets to own on the market right now - nips and tucks like a more powerful A6x chip that shows more than double the benchmark scores and better battery optimization do make the tablet a more enticing gadget to own. We reckon that the improvements in hardware will certainly pay off in the future as more capable apps are produced to better harness the extra processing juice. If you are a FaceTime enthusiast, the improved 1.2-megapixel front-facing camera might make it easier for your FaceTime partners to discern details during video chats. The most innocuous change is ditching the traditional docking port and go with the smaller Lightning connector. While we expect to see more Lightning port compatible accessories in time to come, this might be a point of contention for those deciding to switch from an older-gen iPad to the 4th-gen device, especially those who've invested heavily on gadgets and accessories that utilize the age-old 30-pin dock connector. While there are converters, can disrupt the aesthetics or even the functionality of the accessory.

However, those in the market for a 4G-ready 9.7-inch iPad will finally score with this latest iPad tablet as it supports LTE in the 1800MHz band (of which all three telcos support). Previously, the 3rd-gen iPad only came with LTE support for US and Canada, leaving those looking to use it on 4G network here in Singapore reliant on the HSPA+ spectrum instead. (As a aside note, the unit that we tested in this article was a Wi-Fi-only variant. We will proceed with LTE testing when we get our hands on the 4G-ready version.)

With the new iPad priced identically as the iPad 3 when it was launched, it would be silly to recommend the latter over the newcomer to anyone who is looking for a brand-new tablet. However, if you are on a shoe-string budget and come across a good bargain price for a second-hand iPad 3, it would be better to invest in that option. For those with the 3rd-gen iPad, needless to say, the smart move would be to skip the incremental upgrade (no matter how tempting) and to wait a while longer for the next iteration. Given Apple's track record, we don't think you have to wait that much longer. The Apple iPad is still the best tablet out there in the market in the 10-inch tablet category, but if you have no need for something this large, the smaller Galaxy Nexus 7 or the iPad Mini are worthy options to consider.

If you are planning to get the new iPad along with a telco's two-year data package, we highly recommend you to read up on our detailed analysis of the different data plans for a good gauge of the total cost over the next two years.