Apple iMac with Retina 5K display: Finally, a Retina display for the desktop

To evaluate the new iMac with Retina 5K display, we will be measuring its Geekbench scores against some of the more recent Mac systems that we have tested - a Late 2013 27-inch iMac and 15-inch MacBook Pro as well as the recently released “entry-level” 21.5-inch iMac. That aside, we will also pit the iMac with 5K Retina display against some recently tested AIO systems, Mini-PC systems and gaming notebooks. An interesting thing to note is when running in Windows, the iMac with Retina 5K display will only support a maximum resolution of 3840 x 2160 pixels or 4K. Since this is the only 5K display in the market today, this is likely due to the fact that AMD has yet to release graphics drivers that will handle 5K resolution.

The full list of benchmarks used are as follows:

Geekbench is a popular Mac OS X benchmarking tool and it runs a variety of tests that taxes individual components of a system such as the processor and memory and then gives an overall score of the system’s performance.

The new iMac with Retina 5K display put up a respectable showing, but was outperformed in by the Late 2013 iMac and MacBook Pro in the Multi Core tests. This is because the Core i5-4690 processor in the new iMac lacks Hyper-Threading. So for users who rely heavily on programs that can take advantage of Hyper-Threading, it might be worth upgrading to the more powerful Core i7-4790K processor.

PCMark 8 is the latest benchmarking utility from Futuremark and was designed to measure the performance of Windows 8 systems. We will be testing the system using four different scenarios, Home, Creative, Work and Storage, which simulates different workloads that a user might subject the system to. We then topped it up with two more application test scenarios that use the full suite of Microsoft Office applications and another using Adobe's Creative Suite 6.

On PCMark 8, the new iMac with Retina 5K display recorded decent scores in the “Home”, “Creative” and “Work” test scenarios, which attests to its fairly powerful quad-core Core i5-4690 processor, 8GB of memory and beefy AMD R9 M290X GPU. However, its number dipped when it came to “Storage” because Windows cannot take advantage of its Fusion Drive - in Windows, the Fusion Drive works just like any other mechanical hard disk drive. This also led to its poor scores in the following two “Apps” test scenarios which usually require heave use of the storage subsystem.

The AMD R9 M290X GPU might be based on an old GPU design, but it still remains to be one of AMD’s most powerful mobile GPUs and the results on 3DMark 2013 clearly show that. It easily outscored our Late 2013 MacBook Pro, which is powered by a mid-range NVIDIA GeForce GT 750M; and even the Aftershock XG13, which has a more powerful gaming-grade NVIDIA GeForce GTX 860M.

Seeing that the system’s performance was so encouraging on 3DMark 2013, we decided to compare its scores in our gaming benchmarks with bona fide gaming notebooks. On Crysis 2, the iMac with Retina 5K display did well and managed almost 60fps on “Very High” settings even at Full-HD resolution. However, we noticed that performance dipped substantially when we increased the graphics settings to “Ultra”. And as expected, gaming on 4K is just not ideal. Even on “Normal” settings, the system achieved just 23fps, well below the playable threshold of 30fps.

Tomb Raider is a less demanding game and the numbers reflect that. On Full-HD resolution, the new iMac with Retina 5K display recorded very good frame rates even at “High” graphics settings. However, turning the resolution up to 4K drastically reduced frame rates. At 4K resolution and “Normal” graphics settings, Tomb Raider was barely playable. Compared to the other gaming notebooks, the iMac’s performance was actually pretty decent and competitive.

The short story is this: this new iMac with Retina 5K display is simply gorgeous. If you have been spoilt by the high pixel density displays of leading smartphones and you want a desktop equivalent, this iMac is it. It is considerably pricier, but we feel that its awesome 5K display justifies its premium.

From a performance standpoint, the new iMac is an able performer. Admittedly, the default Intel Core i5-4690 processor, AMD R9 M290X mobile GPU and Fusion Drive is not the most bleeding edge of what technology has to offer now, but it gets the job done well enough while keeping costs down. Besides, for more demanding users, Apple has offered upgrades which will surely bring the iMac on to another level of performance. Though this will come at a cost of a pretty penny.

Cost is an important consideration, because the only other 5K display available right now comes from Dell and that is rumored to be available later this year at the cost of around US$2,500. That is the same as what Apple is asking for their base configuration iMac with Retina 5K display. If you were to compare the two, the iMac is an absolute steal then. The base configuration iMac retails for S$3,388 locally.

As it is, if you are a mainstream user shopping for an iMac and have cash to splash, this new iMac with Retina 5K display is the obvious choice. The display is simply stunning to behold and the machine is speedy and snappy to use for everyday computing tasks. No longer do you need to deal with the display disparity between your smartphone and your desktop.

This advice is also true if you are professional photo or video editor as the extra pixels will surely help with your work. For video professionals, this new iMac will make it possible to edit 4K videos in their native resolution and still have space for other elements and assets such as your editing toolbars.

Unfortunately, some professionals might find the base configurations lacking in their requirements and it is important to note that, like all other Apple products, selecting optional components such as a more powerful processor and GPU can increase cost tremendously. The Core i7 processor upgrade costs an additional S$350; whereas maxing the memory to 32GB will set you back S$850; the AMD R9 M295X GPU requires an extra S$350; and if you want a 1TB SSD, that’s a whopping S$1,120 extra. So if you do opt to upgrade everything, the final cost is an eye-watering S$5,698. Go easy on the upgrades, then. 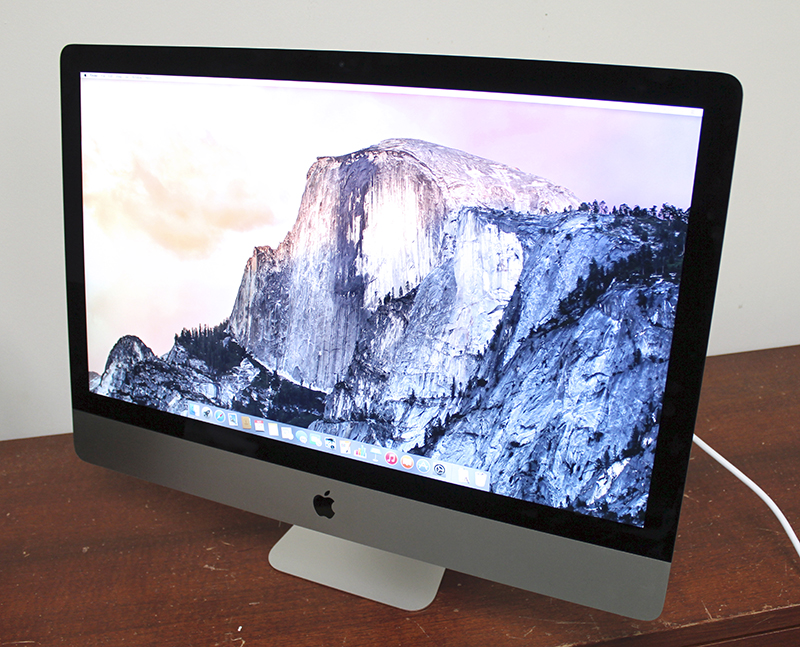 Upgrades aside, this new iMac is not without its foibles. The 5K Retina display is a double-edged sword. Mostly it is because there is not that much high-resolution content out there that can truly take advantage of the display. And upscaling content does introduce a bit of fuzziness, though it is only apparent if you really come close to the screen and squint.

Additionally, if you do play games on OS X, the AMD graphics simply does not have the horsepower to drive games at its full native 5K resolution. Again, you would have to play at a lower resolution and upscale the image to fit the screen. For sticklers, this is obviously not the most ideal solution, but gaming at 5K resolution is simply too much to ask from any mobile GPU right now. The only other option is to have a separate lower resolution display just for gaming, but surely this is just ridiculous right? This new iMac is just not that great for games, despite the rather powerful GPU.

To end, the iMac with Retina 5K display can be seen as a herald of things to come. Ultra-high resolution displays will continue to be popular and there are convincing reasons to get one. However, technology still needs catching up to do to be able to drive these displays for all purposes and not just for productivity and everyday computing applications.

Write a Review
Compare This | Specifications
Gorgeous 5K display
Slim, compact, elegant design
Decent overall performance
Good value considering Dell's 5K monitor
Cannot be used as external monitor
Pricey with upgrades
Not suitable for gaming
Stand does not adjust for height
Our articles may contain affiliate links. If you buy through these links, we may earn a small commission.
Sponsored Links