Apple iMac with Retina 5K display: Finally, a Retina display for the desktop 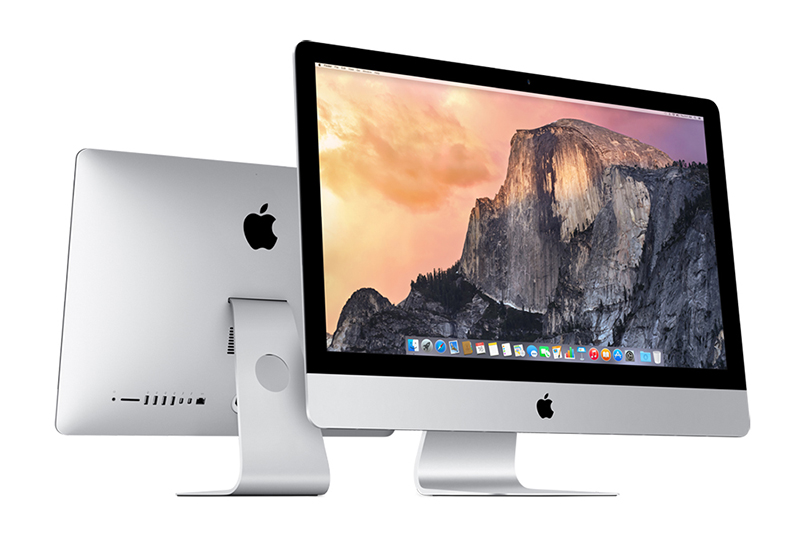 No one can say for sure who started the trend of high pixel density count displays, but Apple was certainly amongst the first when they launched the iPhone 4 in 2010, which featured the company’s first “Retina display”. And at the beginning of this year, we postulated that 2014 could see the start of a display resolution war between PC manufacturers. True enough, with 4K being one of the key trends of the year, PC manufacturers are putting higher resolution displays especially on notebooks.

As for Apple, the company’s Retina displays soon found their way from their iPhones to their iPads and MacBook Pros, but was conspicuously missing from their iMacs until now. It was long rumored that Apple was working on a new iMac with a Retina display. But what we did not know was what kind of display resolution it would sport. And on the 17th of last month, Apple finally announced that its new iMac would indeed have a Retina display and that its display resolution would be a whopping 5120 x 2880 pixels or 5K.

However, as we all know, having more pixels might mean sharper and crisper images, but it also places additional workload on the system - more pixels requires more processing power to fill them. So how does this new iMac perform and is the 5K Retina display really worth getting? This review seeks to answer these questions and more. But first (no, we are not going to take a selfie), let’s take a look at the hardware bits and design of this new iMac. 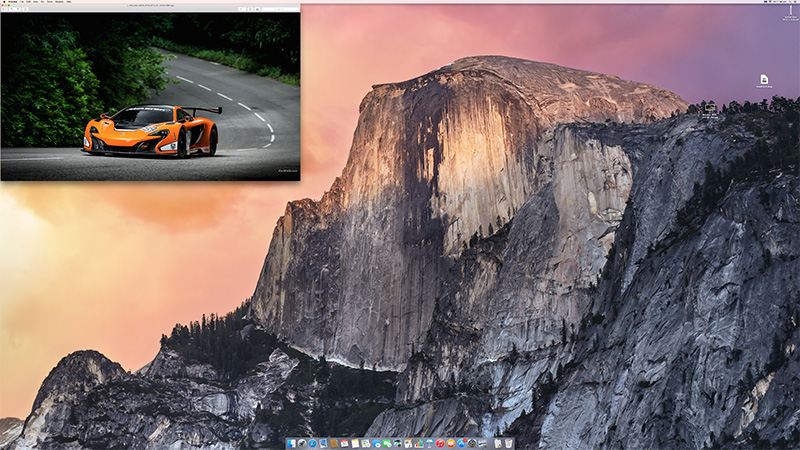 We begin with the hardware and the star of the show here is the new 5K Retina display. 5K resolution is 5120 horizontal pixels by 2880 vertical pixels, giving a total pixel count of over 14.7 million. That is a lot of pixels. To give an idea of just how many pixels this is, consider the table below.

Quite deceptively, 5K resolution is not just 25% more pixels than 4K - it’s actually almost 80% more! And it also represents seven times more pixels than Full-HD. This also means that content creators working with 4K content can do so in native resolution and still have room for other elements and assets. And as you would expect, the display of this new iMac with Retina 5K display is super sharp. Text and images all look super crisp. Viewing angles are good too. It's a truly gorgeous display that offers great clarity, sharpness and richness. One look at it and no desktop display will ever quite look the same again. 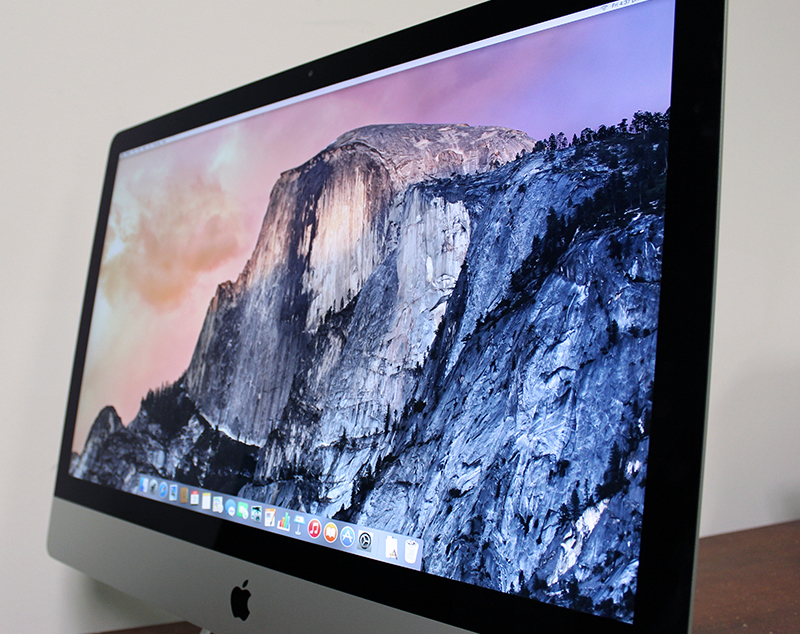 With so many pixels, Apple needed to design its own timing controller, as there is none currently in production that can handle 5K resolution and the massive amount of bandwidth it requires. To be precise, Apple’s custom timing controller offers up to 40Gbps of bandwidth. Clearly, the new iMac packs lots of pixels. But if we look at the pixel density count of its MacBook Pros with Retina displays, it soon becomes clear why Apple needed to pack so many pixels into its 27-inch iMac.

To give an idea of the disparity in pixel density, look at the two images below, which have been taken at the roughly the same distance. Although both have been cropped to 800 pixels width, the difference is clear. The top image is a photograph taken from the new iMac with 5K Retina display and the bottom is taken from a typical 23-inch 1080p monitor - a very popular resolution and size amongst users. The iMac has a pixel density of 217.6 pixels per inch while the 23-inch 1080p monitor has a pixel density of just 95.8 per inch - less than half. 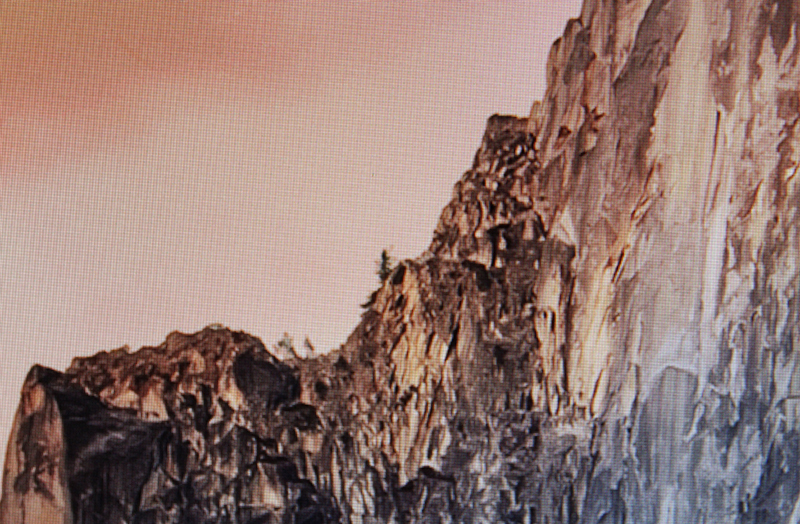 To drive such a high resolution display, this new iMac is powered by quad-core Intel Core i5-4690 processor that runs at 3.5GHz (6MB L3 cache) and comes with 8GB of RAM as standard. This Core i5-4690 processor is a mid-range processor and though it has four cores, it does not support Hyper-Threading. For users who demand more, they can opt for a powerful quad-core Core i7-4790K processor that runs at 4GHz (8MB L3 cache) and supports Hyper-Threading, and also upgrade memory to a maximum of 32GB. Storage, in the base model like ours, comes in the form of a 1TB Fusion Drive. For those unfamiliar with Fusion Drive, it debuted with in 2012 when Apple refreshed its iMac design and basically combines a small flash drive with a mechanical hard disk drive so that users get the performance of a flash drive and the capacity of mechanical hard disk drive. We talked about this in greater detail in our review of the 2012 iMac here. Users can also opt for either a 3TB Fusion Drive or 256GB, 512GB or 1TB of SSD storage.

Graphics processing duties are handled by AMD’s Radeon R9 M290X that has 2GB of GDDR5 memory. Again, users demanding more can opt for the more powerful Radeon R9 M295X with 4GB of GDDR5 memory. The choice of AMD graphics has left some users miffed, considering the potency of NVIDIA’s latest GeForce GTX 980M and 970M processors, and the fact that the Radeon R9 M290X is in fact a renamed Radeon HD 8970M, which is in turn based on the old Radeon HD 7870 from 2012. That said, the decision has likely got to do with the fact that Apple needed AMD’s help in developing the custom timing controller in its 5K display. AMD has been known to be an enthusiastic supporter of the DisplayPort interface and has been adept at scaling resolutions for up to five screens simultaneously. 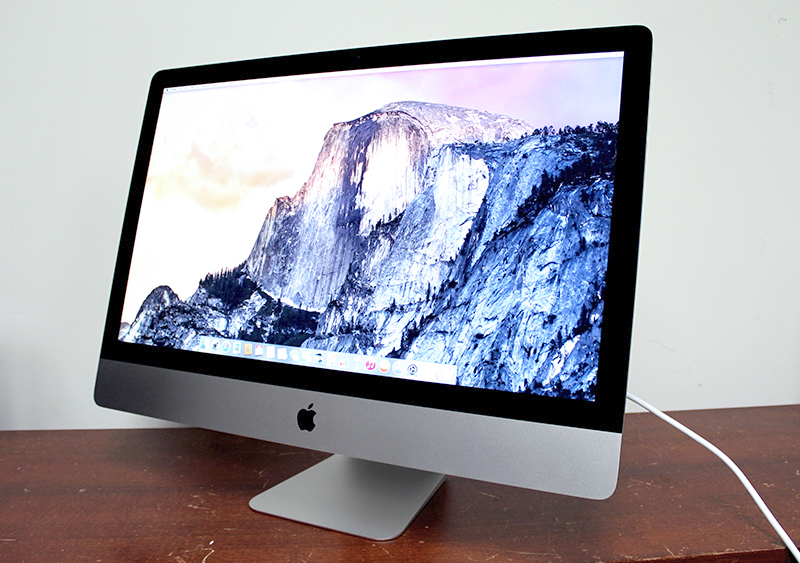 Apple redesigned the iMac in 2012, and even today it still looks fresh and cutting-edge. There is no real reason to update the design, since the only niggle we have with it is that its stand does not allow for much adjustability - it only tilts and cannot be adjusted for height. And so the new 27-inch iMac with 5K Retina display retains the same design as the models that precedes it. 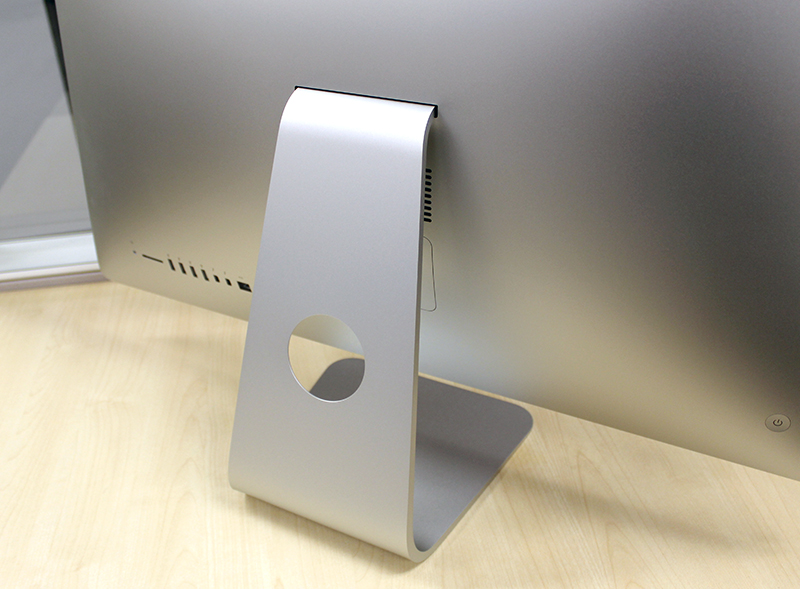 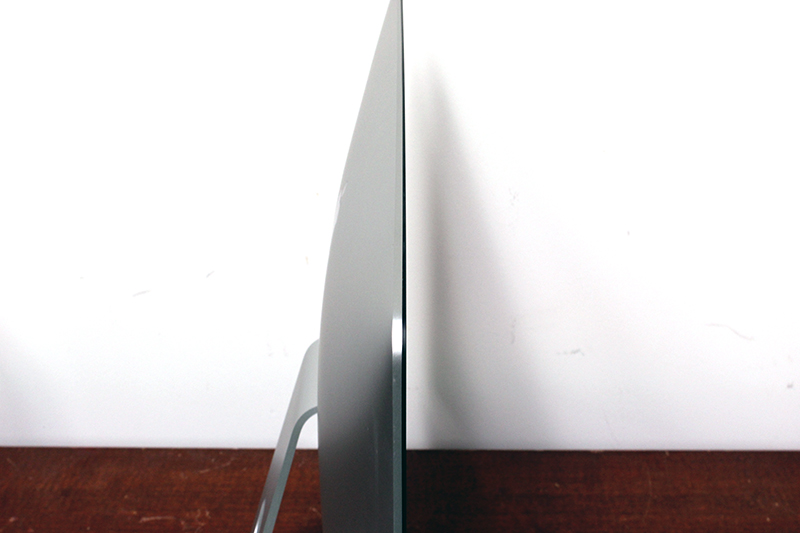 This means it is superbly slim - the edges of the display measure just 5mm thick. And in case you were wondering, the 5K Retina display itself measures just 1.4mm thick and yet it is made up of 23 layers and a whole host of advanced technologies including a process called photo alignment that uses UV light to ensure that the liquid crystals are properly aligned, and another process known as organic passivation that prevents cross-talk and interference that could occur from having pixels so close to each other.

And thanks to the slim display, this new iMac also does not take up much space. Sure, the 27-inch display is pretty big and measures 65cm across and 51cm tall, but the actual desktop real estate it takes up is not that crazy thanks to the display’s slim dimensions and the fact that the stand only has a depth of around 20cm. Its also fairly easy to carry around since it weighs just under 10kg. 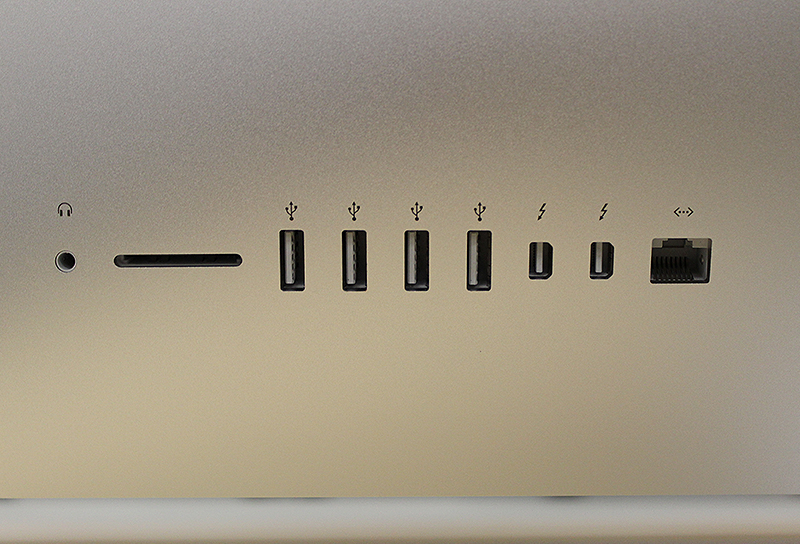 Round the back, users will notice that the iMac bulges towards the middle of the display, which is typical because that it where all the components are. As for ports, this new iMac retains the same configurations as the other iMac models with the exception of newer Thunderbolt 2 ports. Physically, Thunderbolt 2 and Thunderbolt 1 are similar, except that the former can now combine the two previously separate 10Gbps channels into a single 20Gbps channel, this gives it greater flexibility and ability. For instance, Thunderbolt 2 can now support 4K displays, which was previously impossible due to the bandwidth demands of driving a 4K display, which is around 15Gbps (greater than that of a single 10Gbps channel of Thunderbolt 1).

Despite the high bandwidth supported by the Thunderbolt 2 interface, it must be noted that users will be not be able to use the iMac with Retina 5K display in Target Display Mode - remember, the timing controller used in the device offers 40Gbps of bandwidth. Thunderbolt 2 offers 40Gbps of bandwidth, but a single device can only use up to 20Gbps, which is insufficient for transmitting 5K video signals.

Write a Review
Compare This | Specifications
Gorgeous 5K display
Slim, compact, elegant design
Decent overall performance
Good value considering Dell's 5K monitor
Cannot be used as external monitor
Pricey with upgrades
Not suitable for gaming
Stand does not adjust for height
Our articles may contain affiliate links. If you buy through these links, we may earn a small commission.
Sponsored Links