From a design standpoint, the latest iMac is hard to fault. To some, it might not inspire, perhaps even boring. But it’s so slim and light that it's hard to believe that it is a full-fledged system. One could easily pass it off as just a display and not an all-in-one system.

Performance-wise, the iMac isn’t exactly up to scratch compared to the latest Windows-based AIOs from ASUS. The ASUS ET2300INTI is a much more capable performer. Obviously, this has much to do with the fact that in Windows, the iMac cannot call upon its Fusion Drive to boost its performance and instead has to rely solely on its 5400rpm mechanical hard disk.

When comparing it with other Mac systems, the latest iMac more than held its own. As revealed by Geekbench, the iMac was more than a match for the quad-core Retina MacBook Pro notebooks. Also, its Fusion Drive technology really works to provide faster startups, reboots and application loading times (against older systems using only mechanical disk drives). Furthermore, we are happy that Apple has decided to outfit the iMac with a more powerful GeForce GT 650M GPU, which will make it suitable for gaming at moderate game quality settings. This makes it much better than most typical AIO machines.

Unfortunately, as is the case with all things Apple, all this comes at a price. The basic entry-level iMac comes in S$1,788, which doesn’t sound so bad. But if you want an iMac with the same specifications as the tested unit, you’d be looking at a grand sum of S$2,717! The main culprits that add up to the cost are the optional Intel Core i7-3770S processor (additional S$280) and the 1TB Fusion Drive (additional S$350), this is on top of the $2,088 base price of the next step-up model. 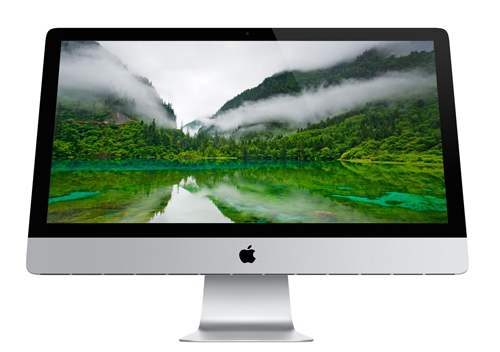 Additionally, much like the new Retina MacBook Pro notebooks, Apple no longer allow user upgrades for the 21.5-inch iMac machines. The larger 27-inch iMacs, however, still feature four user accessible SO-DIMM slots so users can still upgrade their memory. But for the 21.5-inch iMacs, the memory is soldered onto the logic board, which means you can’t add memory later if you decide the default 8GB is not enough. And as you might already know, Apple charges a pretty penny for their upgrades. A 16GB DDR3-1600MHz SO-DIMM memory kit costs around $130 from the shops, but Apple charges significantly more, S$280 to be exact. Since you can't do much about the cost, you should spec your iMac for current and near future usage needs to the best of your efforts to avoid any frustrations later.

That said, for those not picky about performance, the entry-level iMac costs a more palatable S$1,788, and at that price you are still getting decent specifications - Core i5-3330S processor, 8GB RAM, 1TB HDD and NVIDIA GeForce GT 640M. This makes it substantially cheaper than comparable Windows AIOs from makers like Acer and ASUS. Heavy multi-taskers might want to consider adding another S$280 to double the memory capacity but most mainstream users can comfortably get by with 8GB of memory.

The next model in the lineup costs slightly more at S$2,088 and for that you get a faster Core i5-3470S processor and a beefier NVIDIA GeForce GT650M. If you would like to indulge in games often, this spec should be a good option that should satisfy most prospective buyers of the 21.5-inch iMac.

Fusion Drive is optional no matter which spec you go for and it’s a S$350 option. Whether this is beneficial for you depends very much on your usage habits. It’s probably worth going for it if you are using it strictly in a Mac environment. Even then, the cost is a bit steep. However, if you frequently need to use Bootcamp to run specific Windows applications or games, Fusion Drive might not be as useful for you as it operates only in the OS X environment.

In closing, the new 21.5-inch iMac is a stunning piece of machinery from the Cupertino tech giant. Its slim profile defies belief, especially when you consider the level of performance it offers. The display is also bright and brilliant, but audio performance is expectedly average.

Unfortunately, all this comes at a price. If you want levels of performance similar to our test unit, you’d be looking at a final price in excess of S$2,700. In fact, if you want to max out the unit's specs, it can cost you over S$3,000. If you're not picky about the OS and overall system design, ASUS’ ET2411INTI and ET2300INTI both come in at under S$2,200 and offer more better audio capabilities, optical disc drive, a screen space which is also a touchscreen and better processing power but are equipped with more basic discrete graphics engines. The latter model from ASUS even allows you to tilt the screen to various angles - even to push the screen down flat for touch-based games and educational purposes. Furthermore, both units also allow your screen to double-up as a regular display for other devices like game consoles or other set-top devices, making it more versatile.

So from a functional and versatility aspect, the iMac doesn't fare well for its asking price. If you can look past some of its limitation and asking price, it excels in the design and performance departments so much that the new iMac is hard to resist and is easily one of the leaders pushing the boundaries of desktop AIO systems.