Note: This review was first published on 26 October 2021. 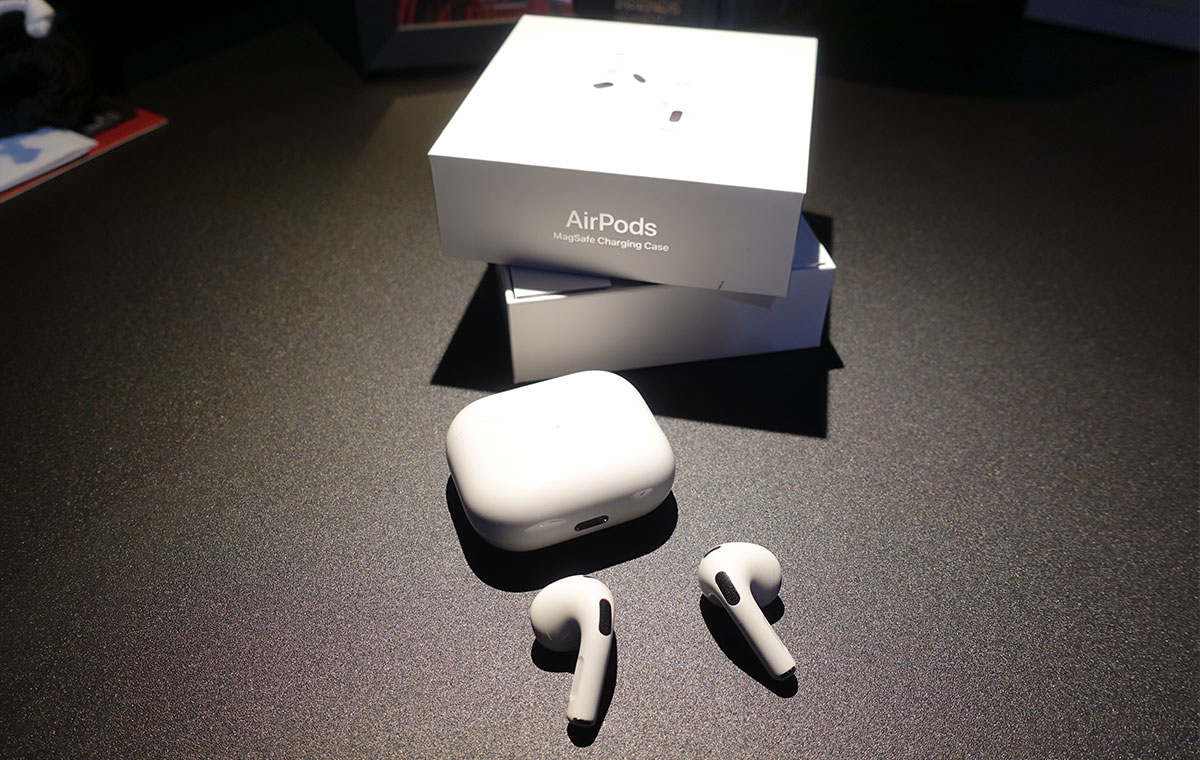 The Apple AirPods are one of the, if not the most, popular earbuds in the world. Whether you’re working out in a gym, walking along the shopping belt of Orchard Road, or attending a Zoom virtual meeting, it’s very likely you’ll see someone’s ears with a little white stem popping out of their ears. With a design that was at first ridiculed, the AirPods quickly became immensely popular with iPhone users thanks to its tight integration with iOS that gave it unmatched ease-of-use (as compared to other earbuds at the time) and its tiny carrying case.

Then came the second-generation AirPods, while still popular, only added wireless charging to the carrying case and a few other minor refinements but not much else in the way of the design and sound quality. With the newest third-generation AirPods, well, I’m happy to share that the latest earbuds not only features an all-new and improved design and features, it also sounds mightily good. Let's take a look. 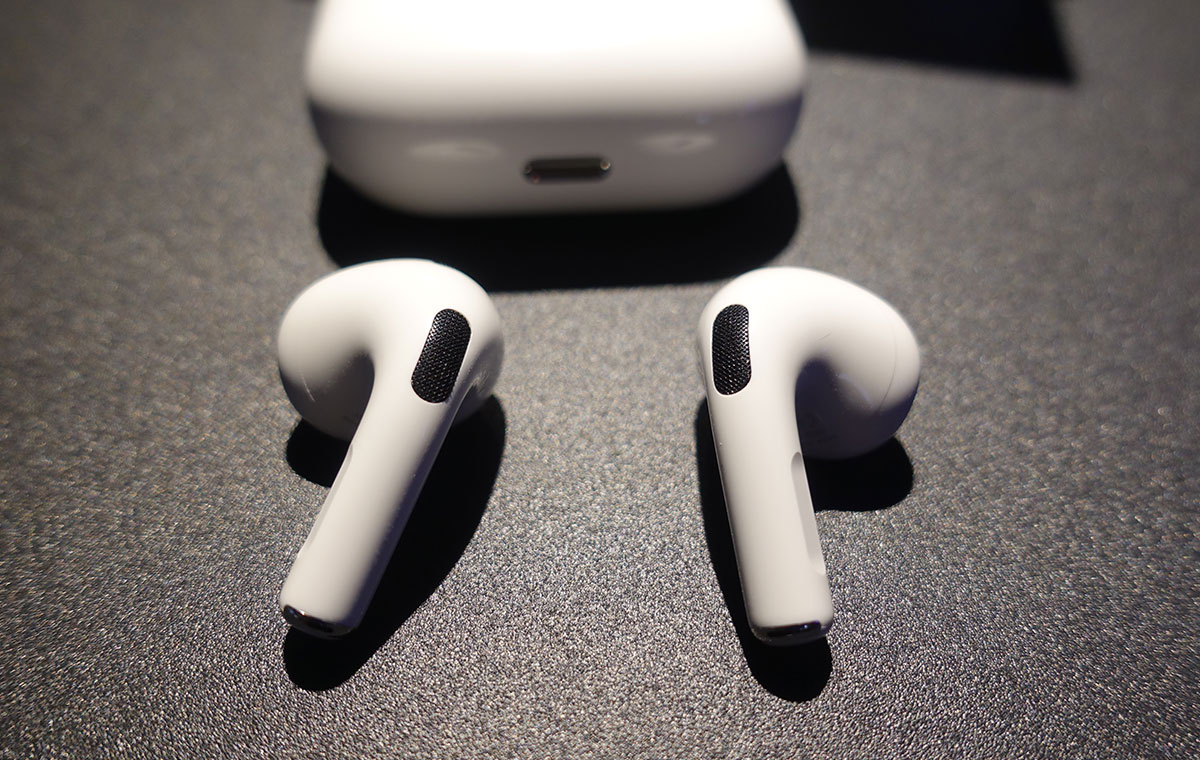 The new AirPods comes in a new lightweight and contoured design that features a stem that’s 33-percent shorter than the previous AirPods. It’s really easy to mistake them for the AirPods Pro at a quick glance. But while the AirPods Pro features an in-ear construction with silicone tips, the third-gen AirPods still have the same earbuds that rest on the outer ears.

The similarity extends to the distinctive black acoustic mesh on the third-gen AirPods, which covers an inset microphone in each earbud. They are not to be mistaken for vents found on earphones with ANC to help equalise pressure – like those you see on the AirPods Pro – but to minimize wind noise when you’re on a call, so that your voice is heard loud and clear. The AirPods also feature AAC-ELD, a speech codec that Apple says will offer Full-HD Voice quality. If you ask me, both features are useful and appropriate upgrades at a time when virtual meetings are more common than face to face meetings. 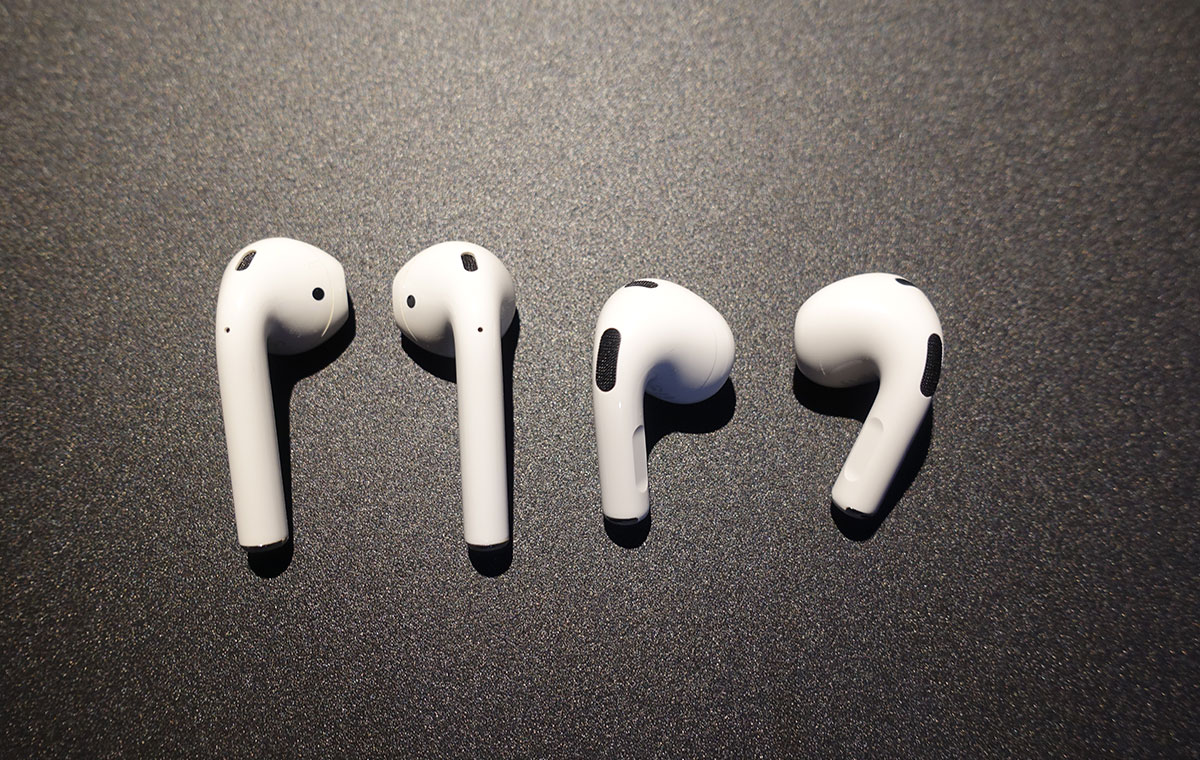 With the shift in design, Apple has also changed how you control the new AirPods. The “tapping” touch sensors found on the sides of the older AirPods are now gone. In its place now are force sensors that are, again, similar to those found on the AirPods Pro, which you squeeze for media control. It’s not a physical button per se, and pressing it gives out a quiet ‘click’ sound in the earbuds.

It’s a major change to the way owners use to control their existing AirPods and the transition to the new style of switching your music tracks might take a little getting used to, but I much prefer the new method – finger tapping the earbuds always felt like someone was knocking on my ears and the ‘clicks’ acknowledges your commands a lot better. 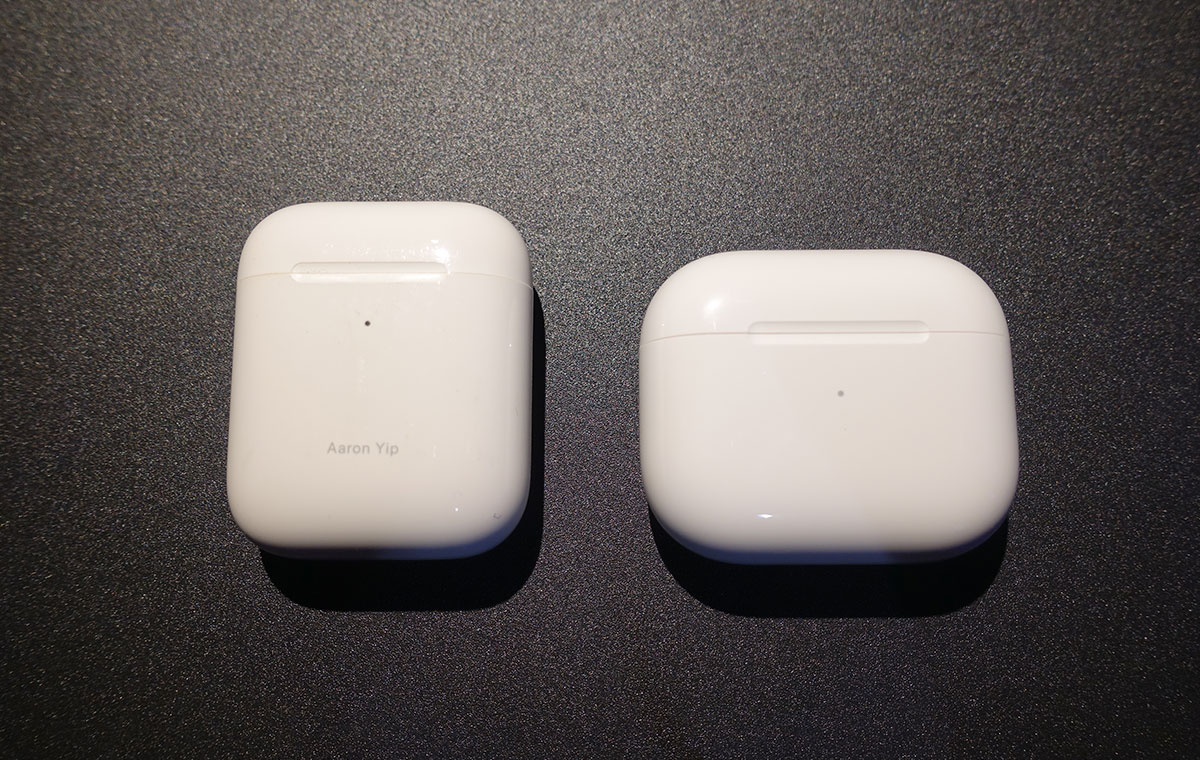 At the heart of it all is a new custom driver and high dynamic range amplifier and the H1 chip – the same chip that also powers the current AirPods Pro and AirPods Max. The H1 seems more better used on the new AirPods, as it takes advantage of computational audio to deliver two new features that were absent previously on the second-gen AirPods: Adaptive EQ, and spatial audio with dynamic head tracking.

What Adaptive EQ does on the third-gen AirPods is pretty interesting. As Kenny explained in his AirPods Pro review, people hear things differently because our ears are shaped differently. So, what Adaptive EQ does is basically tune your music to your ear’s geometry and fit. This enables the new AirPods to deliver great audio within the new design, by taking readings from the internal microphone and tunes the low and mid frequencies of the sound to accommodate for the differences in ear shape.

So, how is the audio quality on the new AirPods?

Sonically, Apple has taken the same approach with them as with its other AirPods products, favouring clarity and a neutral tonal balance rather than lots of weighty bass. Though I have to mention that bass on the new AirPods is vastly improved over the second-gen AirPods. This is best demonstrated in Hans Zimmer’s What Are You Going to Do When You’re Not Saving the World?, where the low notes played from the percussion instruments are heavier than on my older AirPods.

Playing Depeche Mode’s Insights via Apple Music also produces a tonally rich and rhythmically crisp performance. There's an extra warmth to Dave Gahan’s deep, spoken vocals, and greater overall cohesion. Overall, the audio quality is a lot closer to the AirPods Pro (without ANC turned on) and that isn’t a bad thing. It may not have the dynamic and attacking sound quality of the Sony WF-1000XM3, but what it lacks in that regard is compensated with a more easy-going nature – the new AirPods will sound pleasant in about every genre of music and even the lowest stream quality. It’s very solid in this regard.

I would be remiss if I did not talk about spatial audio with dynamic head tracking. By no means is it new or exclusive to the AirPods – it’s already available on the AirPods Pro and AirPods Max. When the feature is enabled, the sound field stays fixed to your source device. This means even if you turn your head or move away, the sound will still appear to come from your Apple devices and immerse you in a way like if you were listening to a surround sound setup. Spatial audio truly changes your music listening experience, but I find that it’s when you use it with video that spatial audio shows off its full potential. Watching the Greyhound (Apple TV+) movie for instance, in the climatic surface battle between the destroyer and submarine scene, I could hear the gunfight sounds coming from all around me. 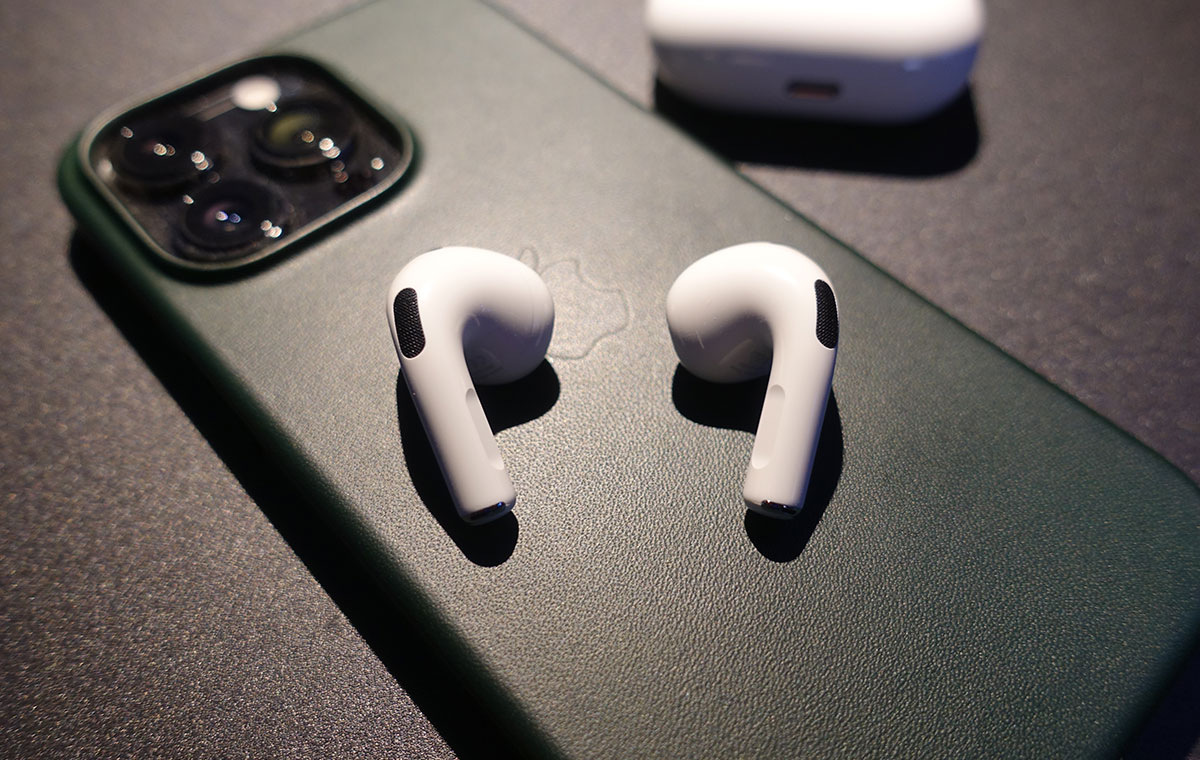 Comfort is also an area that Apple was keen to address with the new AirPods. My smaller than usual ears never had issues with the old AirPods, but they do have tendency to come loose for folks with larger ears or when doing active sports with them (e.g., yoga). The third-gen AirPods' new shape fits better for such cases, and if you have anxiety about your current AirPods dropping down a drainage grate, then the new AirPods seems to stay put better.

Apple has made wonderful audio earbuds and even a headphone. But I think the third-generation AirPods is special, however, as it’s the first true redesign of the original AirPods that started it all for them. That the AirPods is available for S$269 is a surprise, considering that the second-gen version with a wireless charging case was sold at S$299 back in 2019. That's not to say that the AirPods is cheap by any means, because you could get some pretty good ANC wireless buds from brands like Sennheiser or Jabra.

But I think that's besides the point. There are users out there who are not interested in an earbud with ANC (perhaps you don't like an IEM earbud?), and especially for existing AirPods owners who have been holding out for a new AirPods over the AirPods Pro, the new AirPods is an easy choice. Simply because if you're looking for a pair of earbuds with an open design, the third-gen AirPods is up there with the best.

Apple's third-generation AirPods are now available for purchase on their website.

Write a Review
Compare This | Specifications
MagSafe charging compatible
Good sound quality
IPX4 water resistance
Spatial Audio is great for movies
Essentially an AirPods Pro sans ANC
Still requires a Lightning cable
A little pricier now
New earbud shape may not fit for all as compared to earlier AirPods
Our articles may contain affiliate links. If you buy through these links, we may earn a small commission.
Sponsored Links