Apple 15-inch MacBook Pro (2018) review: Fast and powerful, but not for everyone 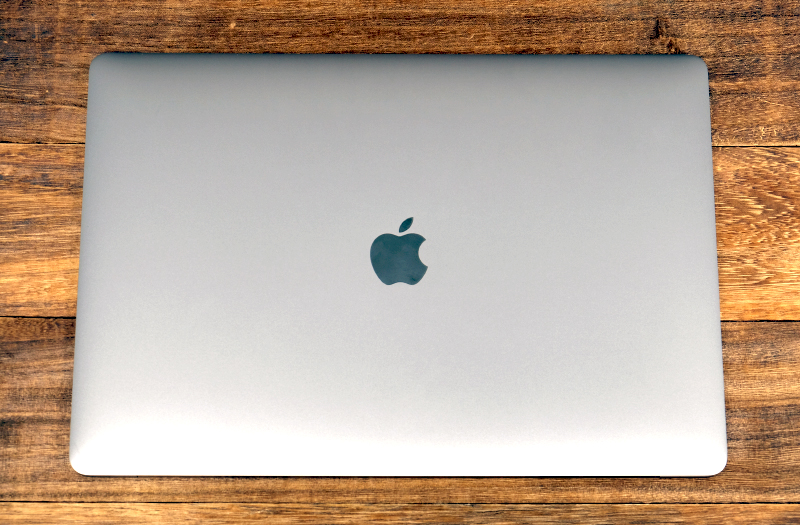 The MacBook Pro was tested using our standard benchmarking utilities, which meant I had to install Windows 10 using Bootcamp. This was done so that its performance can be pegged to comparable Windows notebooks that we have reviewed and also to older MacBook Pro notebooks that I have tested.

Much was made of the Core i9 MacBook Pro’s throttling when it was launch but Apple swiftly released a software update after discovering the cause of the issue. According to Apple, a missing digital key in the firmware was found to be culprit.

I did a series of tests to investigate this issue and found that the Core i9 MacBook did in fact run steadily after the patch. In fact, in my writeup here, I found that it compares favorably to the ASUS ZenBook Pro 15 UX580 - a compact 15-inch notebook that is also powered by a Core i9-8950HK processor.

The ZenBook Pro 15’s results will make for an interesting comparison as it features the same processor as the MacBook Pro and comes in a comparable chassis. The ASUS is 18.9mm thick and 1.88kg heavy.

Unfortunately, the Core i9 MacBook Pro was the only 2018 model that I was able to get my hands on, so comparisons will primarily be against the 2016 13-inch MacBook Pro and 15-inch MacBook Pro that I tested and reviewed previously as well as other comparable Windows notebooks.

At this point, it is worth mentioning that our unit has all the options ticked. It comes with a Core i9-8950HK processor, 32GB of RAM, and a 4TB SSD. Oh, it also costs $9,448 for this lavish configuration. But to be fair, most of the cost can be attributed to the 4TB SSD, which, believe it or not, is a $4,480 option! To say that Apple charges a premium for its storage would be the understatement of the year.

Here are the benchmarks used:

Across PCMark 10’s three workloads, the new 15-inch MacBook Pro recorded scores that were comparable to ZenBook Pro 15. We can also see here that it scored much higher than the gram 15. Clearly, the hexa-core Core i9-8950HK processor offers much more performance than the gram 15’s Core i7-8550U processor. 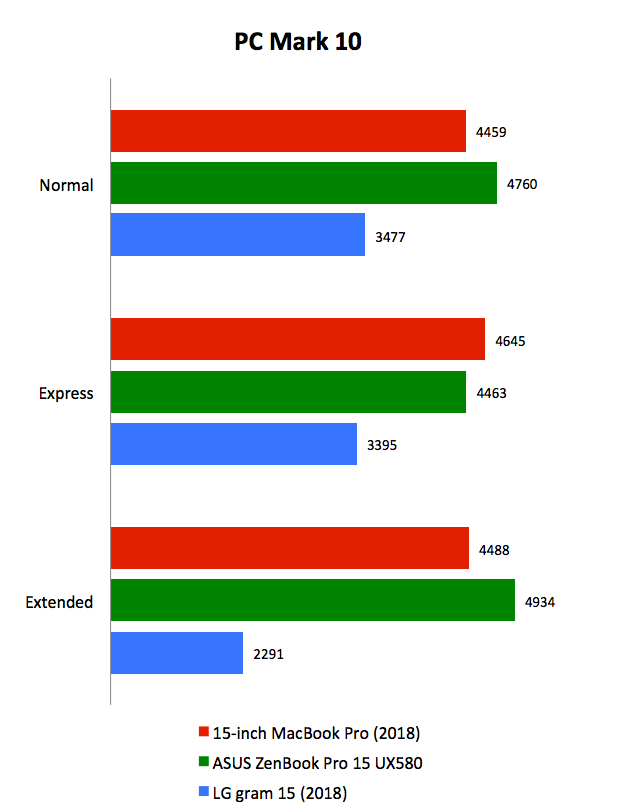 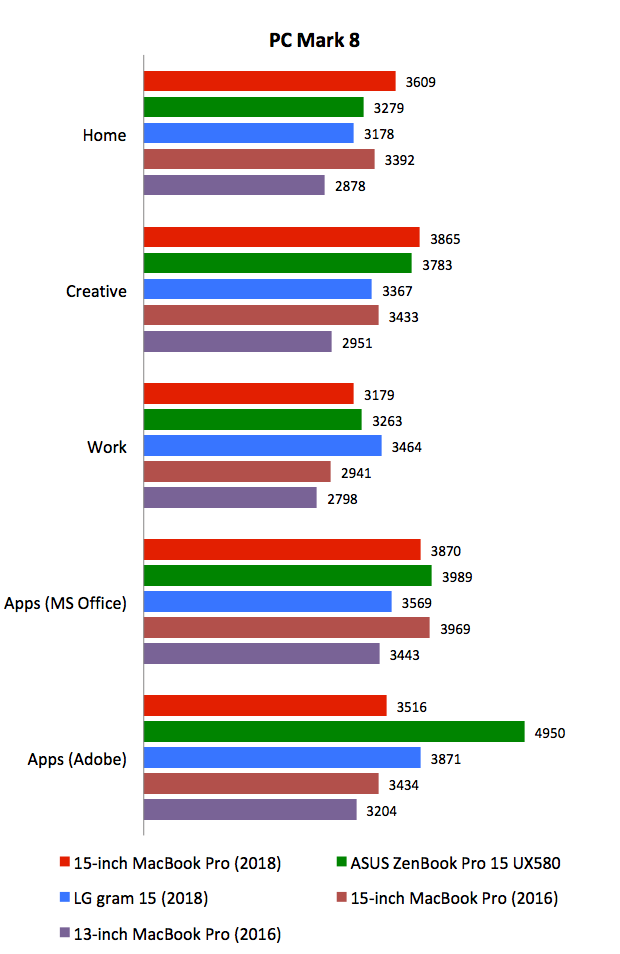 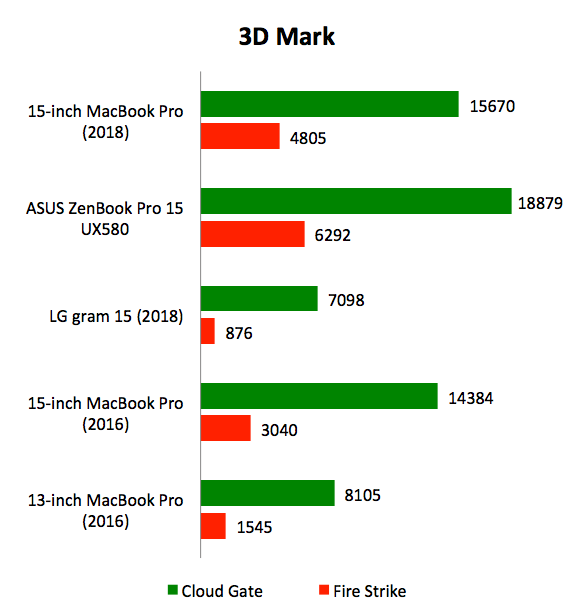 The new 15-inch MacBook Pro notebooks are all outfitted with hexa-core processors which are more power hungry. To make up for that, the new notebooks have slightly larger batteries - up from 76Wh to 83.6Wh. However, as our battery tests show, the increased capacity is not entirely sufficient since the new 15-inch MacBook Pro recorded a shorter battery life of 149 minutes, which is about 21 minutes less. Looking at the power consumption figures, we can see that it has increased quite dramatically by over 30%.

Interestingly, the new 15-inch MacBook Pro has a much higher power consumption figure than the ZenBook Pro 15 even though the two have roughly similar specifications. However, we won’t read too much into it as the battery tests were run in Windows 10 via Bootcamp. In my experience, the MacBook Pro is not 100% optimized for Windows, which could explain the discrepancy. It is more useful to compare the MacBook Pro’s performance against other Macs - in which case, the new MBP has just a little less battery life than the 2016 edition. 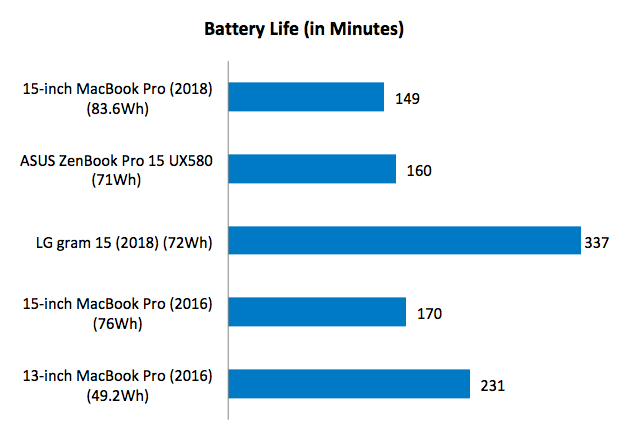 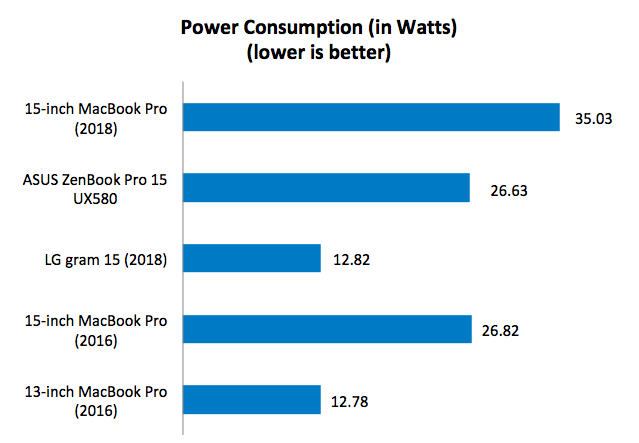 The Portability Index is a score calculated by taking into account a notebook’s battery life, weight and volume. Despite the shorter battery life, the portability score of the new 15-inch MacBook Pro is quite comparable to that of the old one from 2016. Only a few points separate them. Also, the longer battery life of the ZenBook Pro 15 failed to give it a leg up here as it is bulkier than the MacBook Pro. The super thin and light gram 15 from LG was the runaway leader here (though it's not exactly a competitor to the Apple MBP). 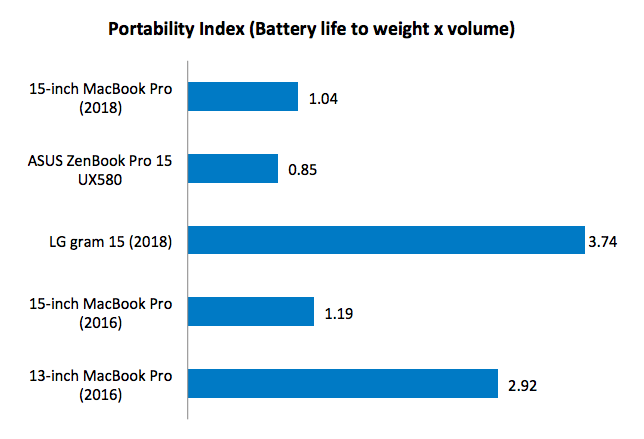 Conclusion: A stellar notebook for pros

Benchmarks only tell half the story. In real-world usage scenarios, I found the new Core i9 15-inch MacBook Pro to be blazing fast. Apps launch quickly and the machine showed no sense of slowing down even if I was running multiple apps and have countless tabs opened on my two favorite web browsers Safari and Firefox. The speed is addictive and I’m afraid I’m finding it hard to go back to my personal 13-inch 2017 MacBook Pro.

However, as powerful as the new Core i9 15-inch MacBook Pro may be. It is not the ideal MacBook Pro for everyone. Yes, performance is stellar but it comes at the cost of portability and cost. On paper, it doesn’t look like it is a lot bigger or heavier than the 13-inch MacBook Pro, but trust me, you will feel the weight if you had to carry it around for extended periods. As much as I love the new Core i9 15-inch MacBook Pro, I don’t think I want to carry it around for work trips unless I absolutely need the raw processing power. To see more performance figures, we've figures from Cinebench and a very long video transcode using Handbrake over here. 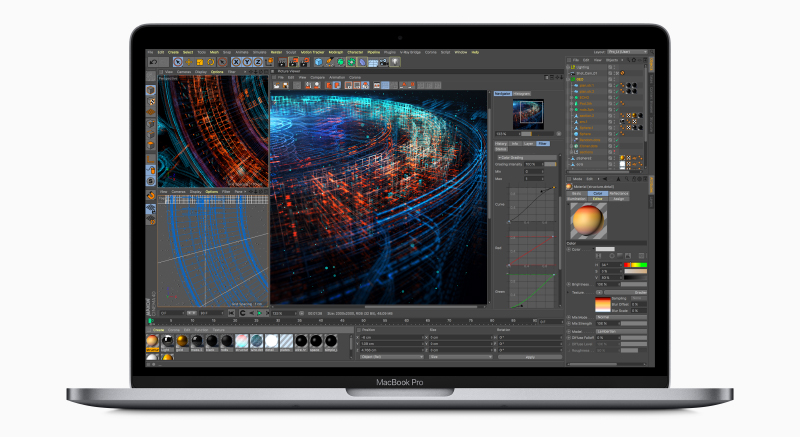 And then there’s the price. The MacBook Pro has never been a cheap notebook but if you want the absolute best that Apple has to offer, you better have deep enough wallets. Even in its most affordable form, a Core i9 15-inch MacBook Pro with 16GB of RAM and a 256GB SSD will set you back just $12 shy of $4,000. Our test system with all the options maxed out (Core i9, 32GB RAM, 4TB SSD) is a staggering S$9,448. Here are the two off the shelf configurations that Apple offers:

There are some other minor issues with the notebook. The fans do get quite loud under heavy loads. It is not something to be alarmed about - the ZenBook Pro 15 gets loud too - but it can be a distraction. Also, now that the Touch Bar has been around for nearly two years, I'm not sure it is as helpful as Apple makes it out to be. For sure it can be useful in some situations, but personally, I found it more of a hassle than a tool. I will take physical Esc and function keys anytime over the Touch Bar.

So at the end of the day, my buying advice remains the same. Unless you are a creative professional that relies heavily on apps that can take advantage of the hexa-core processor or GPU acceleration, there is no real need for the 15-inch MacBook Pro.

I haven’t tested the new 2018 13-inch MacBook Pro but I’m sure that it will be plenty quick thanks to new quad-core processors. Sure, bragging rights are fun but I'm not entirely convinced that the tradeoffs in cost and portability are worth it. For professionals who know what they are doing and want the very best hardware, however, this new 15-inch MacBook Pro comes highly recommended. Just make sure you have a fat wallet.

Write a Review
Compare This | Specifications
Extremely powerful
Gorgeous display
Fantastic trackpad
Very well built
Four USB-C Thunderbolt 3 ports
Compact and light for its class
Options are extremely expensive
Fans are loud under load
Keyboard needs some getting used to
Touch Bar appears superfluous
Our articles may contain affiliate links. If you buy through these links, we may earn a small commission.
Sponsored Links