The first Apple Silicon for Macs is the M1. It's based on ARM and also on Apple's A-series processors that are in its iPhones and iPads. Being famously secretive, what we know about the M1 is what only what Apple chose to reveal. Here are the high-level highlights:

Apple shared many claims about M1 and the new 13-inch MacBook Pro during its keynote. Some highlights include 2.5x the CPU performance, 5x the graphics performance, and 11x the machine-learning performance compared to model it replaces.

But the thing that really made an impression upon me was how M1 is claimed to be able to deliver the same CPU performance as the “latest PC laptop chip” with just a quarter of the power and then match the peak performance of current-generation integrated graphics will a third of the power. 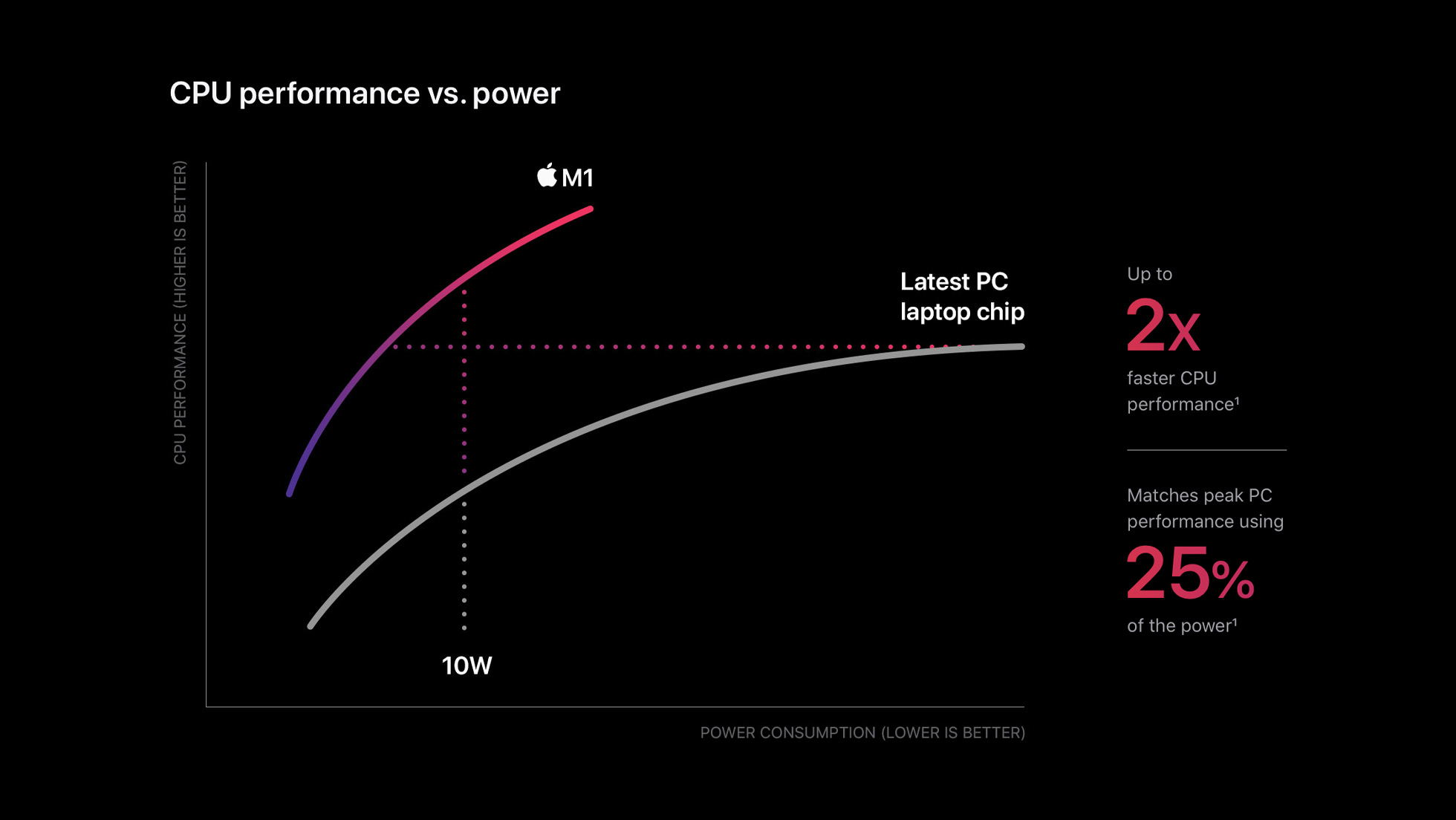 The secret sauce, according to Apple, to these incredible leaps in performance and efficiency is M1’s unified memory architecture. Briefly put, M1 has a large pool of fast memory (RAM) that’s accessible by all components of the SoC, including the CPU and GPU. This negates the need for copying and moving data around and improves performance and reduces power consumption.

This all sounds good and well but it’s necessary to mention that all the M1 Macs are limited to “just” 16GB of memory right now. Apple says it’s more than enough for what these machines are designed for, but if you feel like you need more, you are out of luck. 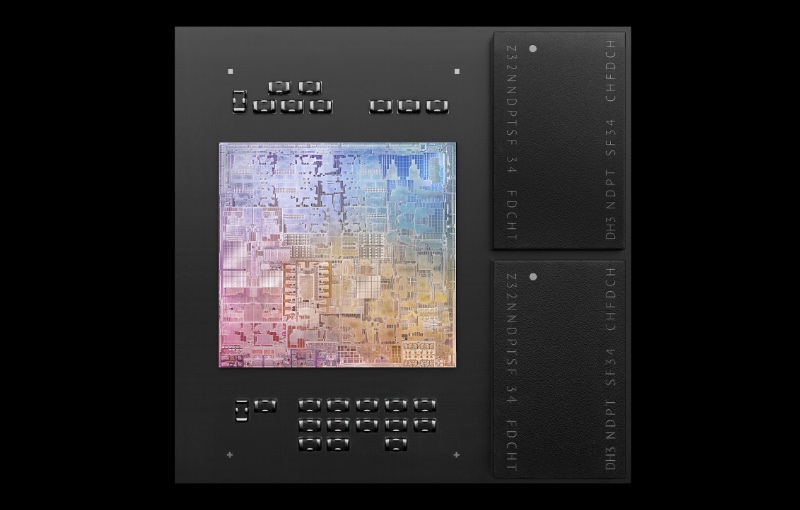 Apple didn't mention clock speeds but benchmarking utilities say M1 is running at 3.2GHz. But that number isn't very instructive because clock speeds work very differently on the M1. Apple say M1 doesn't have turbo boost and that it rans at its maximum clock speeds most of the time and only slows down when it sees that the system can no longer keep the chip cool. That's the opposite of how Intel systems work, which run at lower clock speeds for most times and only ramps up clock speeds when there's a need.

Now, before we look at the benchmark results, it's important to state that the version I'm testing is a configured model with 16GB of memory and a 1TB SSD. How much the extra memory will affect performance is difficult to say but given that these are mostly CPU intensive workloads, I'm thinking the impact would be negligible. Also, when configured as such, it costs S$2,749 (ouch) – the extra memory and storage costs S$300 extra each.

Now lets take a look at the benchmark results.

Geekbench CPU is a cross-platform processor benchmark that tests both single-core and multi-core performance with workloads that simulate real-world usage. Geekbench 5 scores are calibrated against a baseline score of 1000, which is the score of an Intel Core i3-8100. Higher scores are better, with double the score indicating double the performance.

The latest version of Geekbench 5 is a Universal app so it runs natively on the new M1 Macs. Performance was very impressive. Its single-core score was the highest every recorded and it's over 30% faster than even an iMac with a Core i7-10700K processor. It's multi-core score was also higher than the iMac and over 68% greater than the Intel 13-inch MacBook Pro that was launched earlier this year. 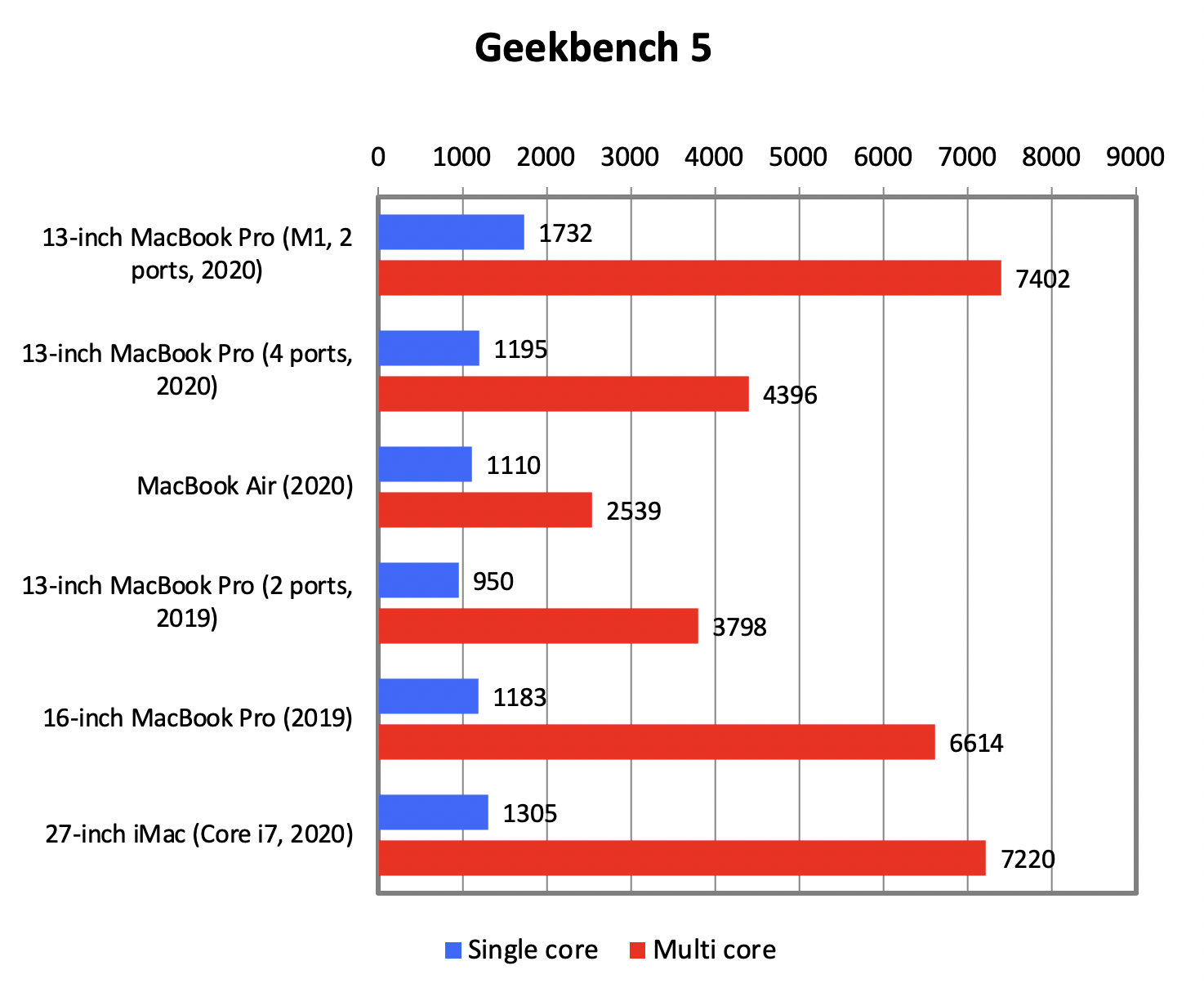 This tests involves transcoding an hour-long 1080p video using Handbrake and recording the time it took. You'll see two bars for the M1 MacBook Pro and that's because it was tested with two versions of Handbrake – one running natively on M1 and another coded for Intel and hence running using Rosetta 2. This is a browser benchmark that consists of six HTML5 and JavaScript-based workloads designed to mirror everyday tasks like photo editing, album organising, stock option pricing, and spreadsheets. 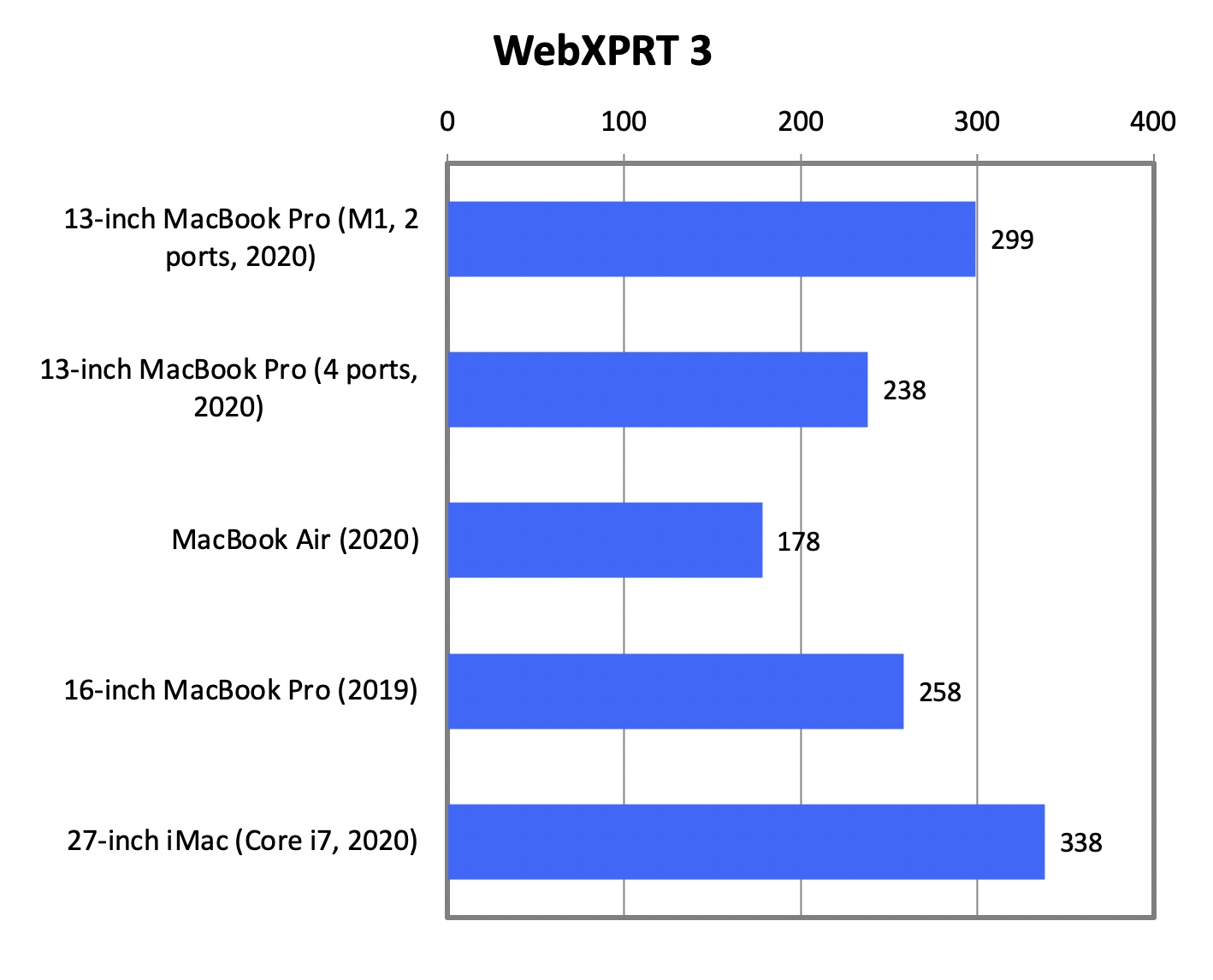 Cinebench measures the rendering performance of a CPU. We are using the latest version, R23, which has been compiled to run natively on M1 Macs. This might be an old benchmark but it's based on the Unigine engine and runs in OpenGL which should give us a good idea on real-world gaming performance at least on older titles. 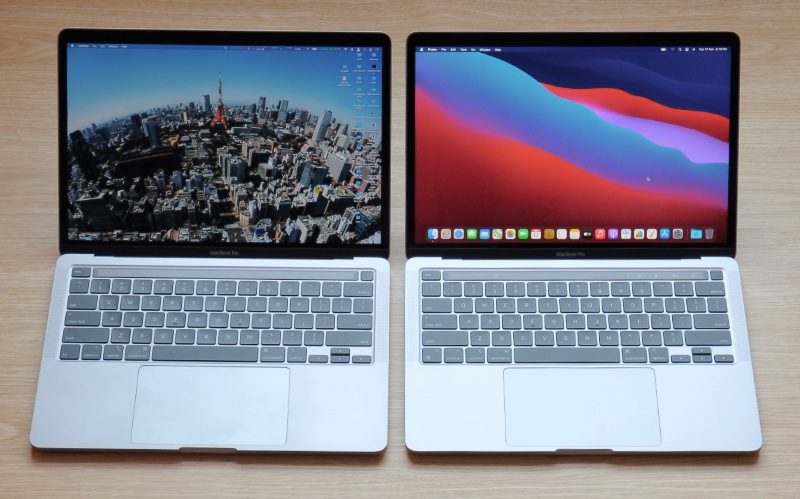 Benchmarks tell just part of the story, what’s more amazing is just how much more usable this new M1-powered Mac is in everyday use. Universal apps (more on this later) launch instantly and the notebook never slows down no matter what’s running and how many apps you have opened. I could max out CPU usage by transcoding video and I could still switch between my 80 or so browser tabs between Safari and Chrome without a hitch. I couldn’t do the same even on the iMac with a desktop-class Core i7-10700K processor.

You might attribute this to the fact that the test machine has 16GB of memory but iStat Pro tells me only half is being used most of the time and that most of the data was actually committed to SWAP (I had up to 12GB in SWAP at one point), which is bizarre because that should make the system less responsive (because it's accessing from the SSD). Clearly, M1 and macOS Big Sur work in ways that are very different from Intel Macs.

What’s also bizarre is that this MacBook Pro hardly gets warm and its fans seldom spin up. Even during the super CPU-intensive transcoding test, the fans didn’t spin up until after three minutes and even then it was merely a whisper. On any Intel Mac, the fans would have spun up in mere seconds. Insofar as performance is concerned, this is the most amazing notebook I have ever used. In the past week running my usual suite of apps that include Safari, Firefox, Pages, Photoshop, Music, Airmail, and bunch of other apps running in the background like iStat Pro and Bartender, I could easily get through a typical 10-hour workday. What's more, I was doing all of this at around 80% - 90% screen brightness. This was something I could never do with my Intel-based 13-inch MacBook Pro. Furthermore, some of these apps, like Firefox, Photoshop, and Airmail, are not running natively on M1 yet which means they were eating up more battery. We’ll have to wait and see to properly evaluate the battery life of this new MacBook Pro but even as things stand now, it’s incredible.