Razer Huntsman V2 Analog review: Kind of like having joysticks on your keyboard
Product Listing
AcerAftershockAlienwareAorusAppleArchosASUSAxiooDellDopodFujitsuGatewayGigabyteHandiiHPHuaweiLenovoLGMicrosoftMSINECNEOPanasonicRazerSagerSamsungSonySuzukiToshibaViliv

Apple claims that its new 13-inch MacBook Air can last up to 12 hours on batteries. To be specific, the 12 hours is calculated when doing lightweight tasks such as word processing, web browsing and presentations. If you were to watch movies on iTunes, Apple says that 10 hours is possible.

Using Powermark (in the the Windows environment), we managed 4 hours and 8 minutes, which is respectable but not fantastic. In terms of power consumption, it achieved just slightly over 13W and this puts it at around the same mark as the Sony Vaio Duo 11. This is pretty decent considering the Sony Vaio Duo 11, as well as the other hybrids, have smaller 11.6-inch displays.

However, if we were to revert to our older testing methodology which was to loop a 720p video, we managed 7 hours and 16 minutes, which was comparable to the recently reviewed MSI GE40. It seems that the fourth generation Core processors are even more efficient in tackling multimedia needs like running videos, hence the large difference in battery life when running Powermark as opposed to looping videos. Speaking of which, if we looped this same video in its native OS X environment, we recorded an impressive 8 hours. Clearly, the MacBook Air is better optimized for OS X. 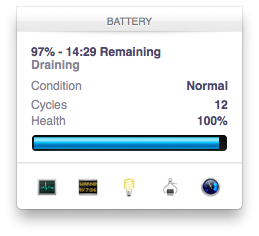 Does this mean that the MacBook Air’s battery life is not as good as Apple says it is? The short answer is no. The video kept both cores of the MacBook Air at an almost constant load of around 15% to 20%. If you were to use it for word processing, web browsing and preparing presentations, the processor wouldn't be taxed nearly as much and it is entirely possible to get 12 hours or more.

Our Portability Index factors in battery life, weight and volume so you can see which notebook is the most worthwhile to carry around. The MacBook Air’s portability score is one of the best in its class thanks to its impressive battery life and also its compact dimensions and light weight. Whichever workload you compare, it bests all of the last generation Ultrabooks of the same form factor.

Write a Review
Compare This | Specifications
Long battery life
Top notch build quality
More affordable
Light and portable
In need of a visual refresh
Not user upgradeable
Only 1440 x 900 pixels resolution
Our articles may contain affiliate links. If you buy through these links, we may earn a small commission.