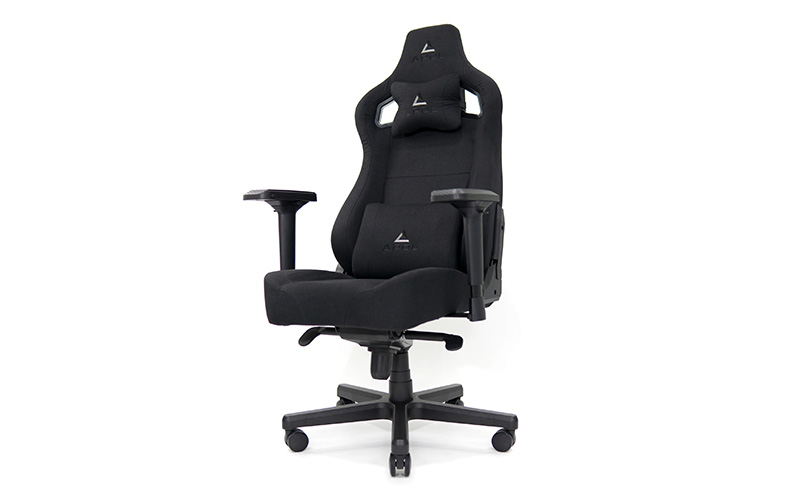 We all know what a gaming chair looks like by now – think racing seats, aggressive stripes, and cutouts in the headrest. APOL's Sphinx hews to that almost perfectly, but it thankfully offers a much more tasteful design with an all-black aesthetic that's broken only by the white accents in the APOL logo. The Sphinx's muted look is probably a result of how APOL sees itself as a company. While we may refer to its products as gaming chairs, it doesn't quite want to be constrained by that term, preferring to see its chairs as ergonomic models designed for more than just gamers.

The Sphinx joins the Kraken and Behemoth in being named after the beasts of myth, but as its name suggests, this is a slighter and more petite creature. The Sphinx was designed with smaller folks in mind, and if you find APOL's existing range too large for you, you might want to give this chair a look. 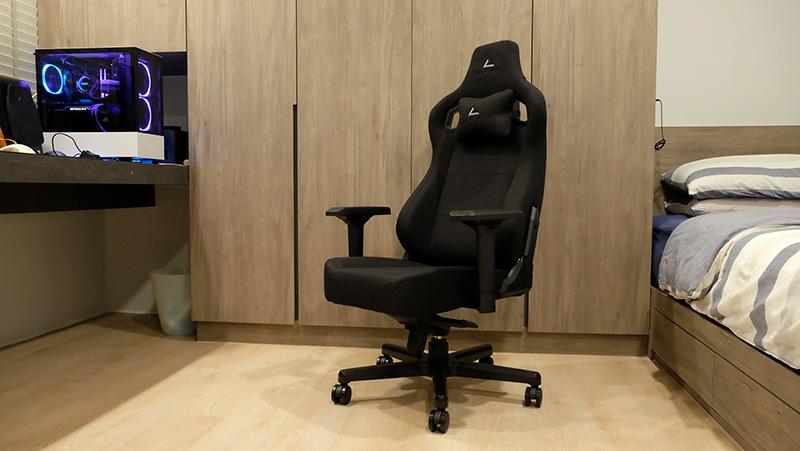 I was told that this was the result of feedback APOL received from its customers who bought the Kraken. As it turns out, I probably fall right smack into the Sphinx's target audience. Some Kraken owners wanted a chair that was smaller still, and the Sphinx is intended to fill that gap. Take me for example – at 154cm tall, I can't comfortably set my feet on the floor on the Kraken, but I'm able to do this on the Sphinx.

Put simply, the Sphinx just fits me better than the Kraken, and I'd recommend getting it over its bigger brother if you're around my height.

However, the Sphinx is a bit more than just a smaller Kraken. The seat comprises of just a single continuous cushion, and there's no gap between the seat base and the wings that rise up at the sides. I don't think this makes much of a difference in terms of comfort, but this design is easier to keep clean since food and other debris can't fall in there.

I do find the seat base a little too narrow though, even when compared to the Secretlab Throne, but that's somewhat mitigated by the gentle angle of the side wings. 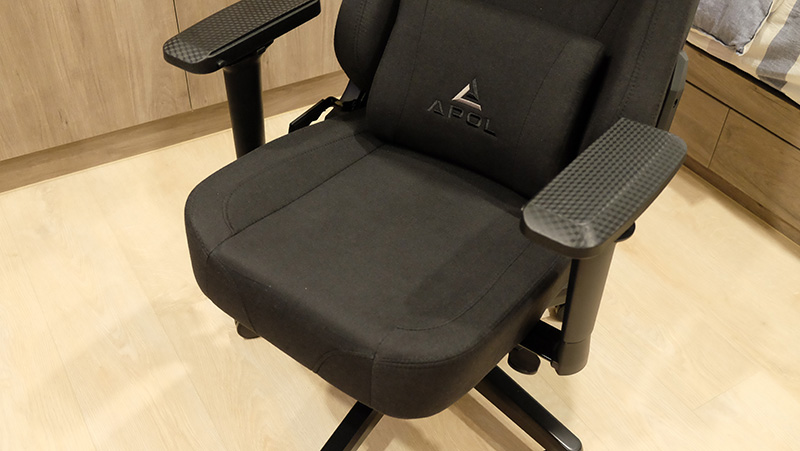 The backrest is different too, and it features a straighter backrest compared to the Kraken's more curvy design. The chair is constructed from cold cure foam, but the seat feels markedly softer than the backrest. And when compared to something like the Secretlab Throne, the foam also has more give and is less firm. However, I get that some people may find the softer foam more comfortable, and they wouldn't be wrong. That said, I also want to point out that while softer foam can feel better, it also means less support.

APOL lists the Sphinx in just one colour – a charcoal fabric covering. This material supposedly goes toward making clothes as well, and the company says they picked it for greater comfort. After all, if it's comfortable enough to wear, it should be comfortable enough to sit on, right? Fabric is also more breathable than PU leather, and there's no risk of it peeling in our humid climate, so it seems like a smart choice. However, one downside is that it won't clean up as nicely after spills, so you'll have to be really careful. 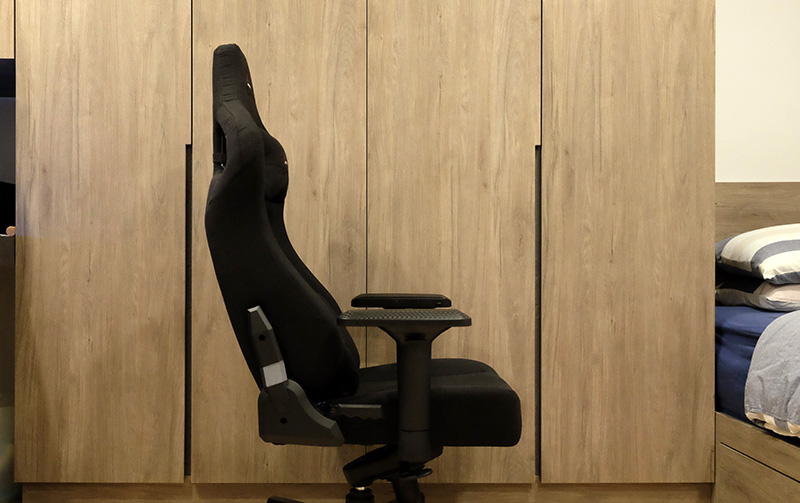 How does it compare to Secretlab's SoftWeave chairs? Suffice to say, the two are very different and nothing alike. Secretlab's fabric feels stiffer to touch, and is also rougher. They're offered in flashier colours too, compared to the staid black of the Sphinx. Ultimately, I'd say that the SoftWeave chairs just feel better made and more polished and refined. Some folks might find the softer textile the Sphinx uses more comfortable, but I think it really comes down to a matter of personal preference.

Overall, the Sphinx still feels a little rough around the edges. It comes down to the small things, such as the top of the headrest, which isn't completely level, and the cold cure foam, which is of different consistency across different areas of the chair. And if you look really closely, you'll notice that the stitching is a bit inconsistent as the spacing between stich and seam can be quite uneven in certain areas. It's probably a good idea that APOL went with black stitching on black fabric, so flaws like this don't stand out. 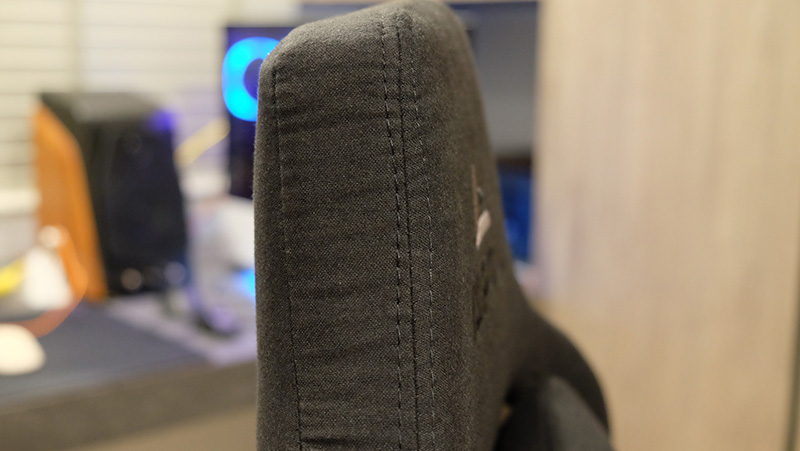 The chair ships with two memory foam cushions – a headrest and lumbar pillow. Small tweaks have been made to the design of the cutouts so the head pillow can sit lower, and it's a nice touch on the part of APOL. One problem I often have with gaming chairs is that the cushion often sits so high that it ends up pushing my head forward instead of cradling my neck like it's supposed to, but the Sphinx solves this problem.

On top of that, APOL does offer larger cushions as a S$97 add-on upgrade (also made of memory foam), which I find to be pretty neat. They're actually designed for the Kraken, but they'll work on the Sphinx too. The main difference is that the Kraken's side wings clamp the lumbar cushion in place, so you can move it up and down the backrest, but you can't do this on the Sphinx.

These larger cushions fill out the backrest a little more, and they're really cushy. If you feel like the regular lumbar support doesn't reach high enough, these should do the trick. That said, I find the lumbar pillow makes a bigger difference than the head cushion – APOL should definitely see about selling them separately to help bring the price down. After all, S$97 seems like a steep price to pay for an extra set of cushions. 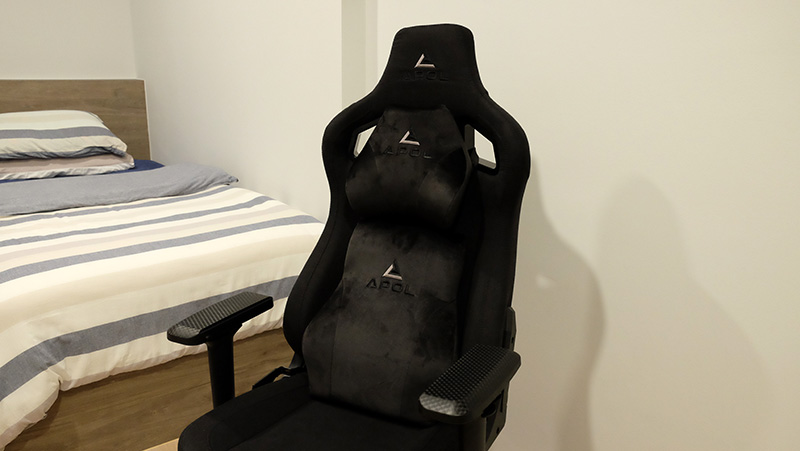 Elsewhere, the Sphinx has all the usual features you'd expect from a gaming chair. This includes 4D armrests, height adjustments, and a multi-tilt mechanism. The chair can also recline up to 165° and lock in place at your desired angle.

One complaint I have is the positioning of the height adjustment and tilt lock levers. They're almost directly aligned with the supporting strut that holds the arm rests, which kind of gets in the way when you want to pull the lever up to adjust the chair's height. The lever's motion isn't obstructed, but the large bar above it makes it hard to get to it. 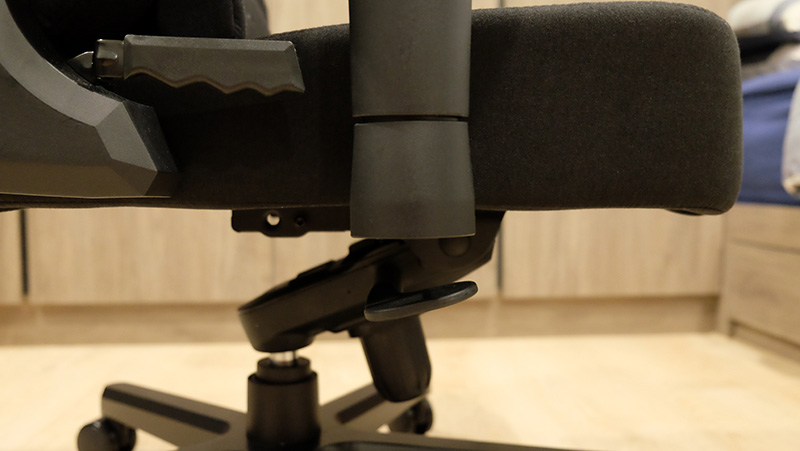 I'm not a fan of the carbon fibre pattern on the arm rests either, and I'd much have preferred an unadorned black surface. You can move the armrests across all three axes and angle them toward the left or right. The movements are mostly smooth and quiet, save for the side-to-side adjustments which require quite a bit of force. 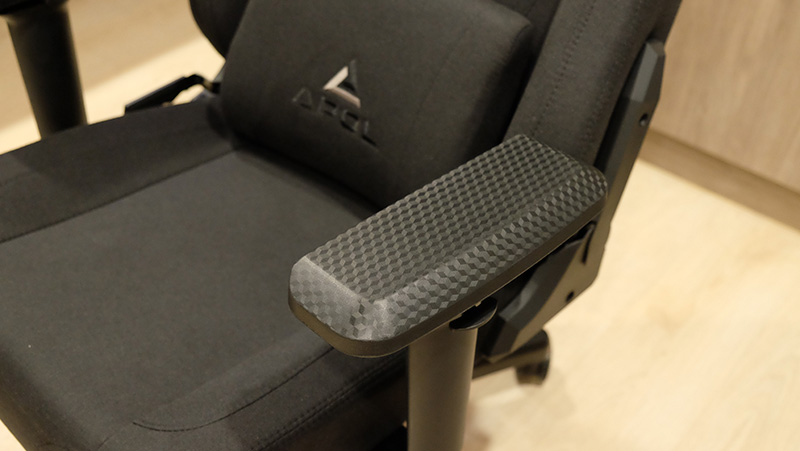 The wheel base is black aluminum, featuring also 65mm casters that roll over my vinyl flooring fluidly enough. 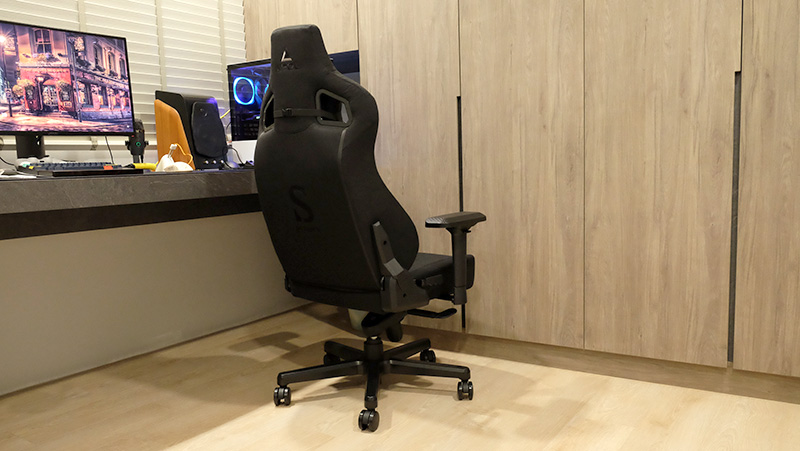 While APOL seems to be positioning the Sphinx as a more affordable option to something like Secretlab, it isn't actually that cheap at S$398. That pricing was probably more value-for-money on its larger models like the Kraken and Behemoth, but I think the more compact model should go for less. The Kraken and Behemoth also cost S$398, which is a lot more attractive if you compare them against similarly large and more expensive models from other brands.

But given that the Sphinx is smaller and goes up against the Secretlab Throne, which isn't that much more expensive at S$449 (for the SoftWeave model), the price doesn't seem as compelling. It is still cheaper though, while offering many of the same features, so I can't quite call it a bad deal either.

The APOL Sphinx could use some additional attention to detail and polish, but it's a pretty comfortable chair overall. If you're on a budget, you might find something to like in the Sphinx.