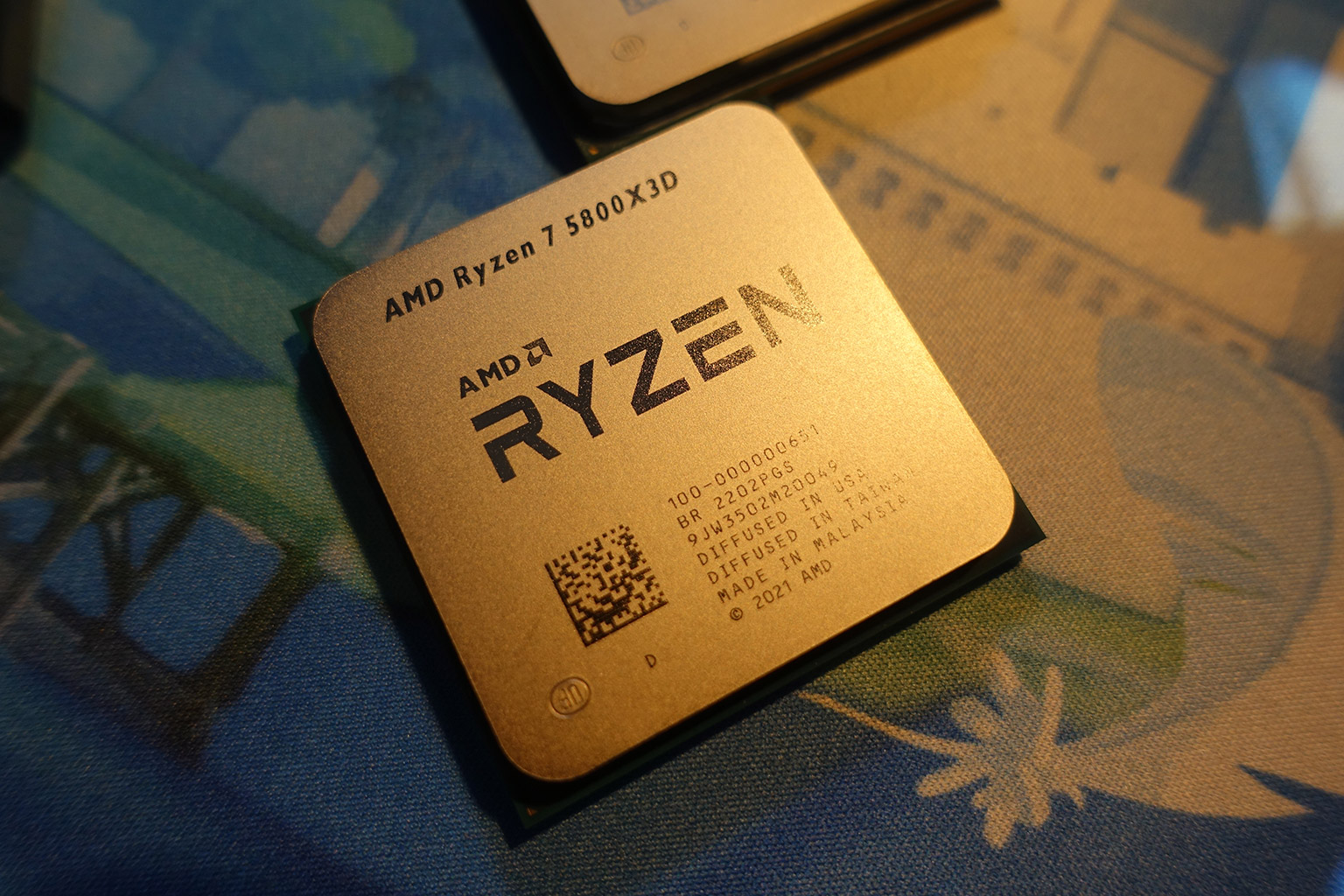 AMD’s newest line of Ryzen processors – the 7000-series – for desktops is scheduled to be launched later this year, but the red firm isn’t quite done with its current-gen Zen 3 5000-series yet.

Meet the Ryzen 7 5800X3D, AMD’s latest and very possibly the last CPU of the 5000-series family, and which they claim is the “fastest” and most “advanced” gaming processor.

Now, the 5800X3D is not exactly new. It’s based on the existing Ryzen 7 5800X and so comes with the same core and thread count, similar default TDP and still supports up to PCIe 4.0. But there are also distinct differences. Have a look:

As you can see, the 5800X3D has markedly lower clock and boost clock speeds but comes with an astounding 96MB L3 cache. That’s triple of the 5800X and a third more than the flagship Ryzen 9 5900X processor. What’s going on? The answer is AMD’s latest technology, called 3D V-Cache, and if my benchmark numbers are anything to go by, there’s some very sick AMD wizardry going on here. 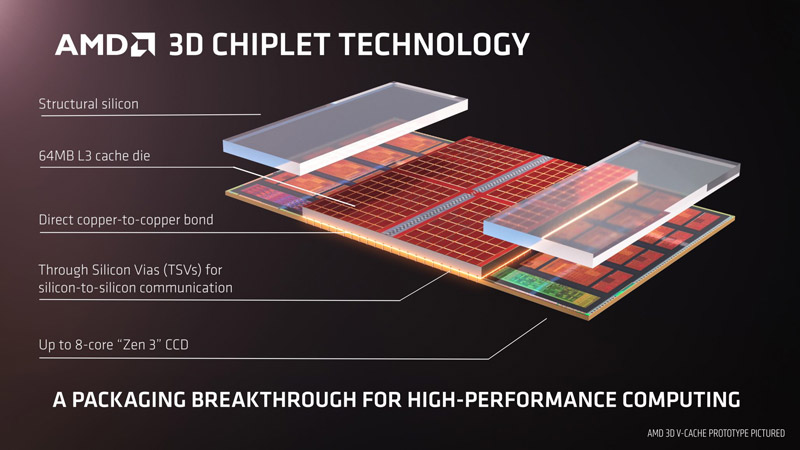 To put it very simply, 3D V-Cache is an AMD technology that enables it to vertically stack cache onto a CPU. This allows AMD to increase the processor’s memory, without having to increase the size of the die or shrink its logic circuits, and thus allowing it to triple the L3 cache of its processors. This has the benefit of improving the CPU’s performance despite retaining the same architecture, and number of cores and threads.

But why is L3 cache so important? Well, more L3 cache allows the processor to stream and store more instructions, decreasing the number of times it needs to pull instructions from RAM. Naturally, this doesn’t provide a performance benefit in all situations. However, in scenarios where the CPU is handling multiple instructions, such as gaming, an additional L3 cache should provide a big uplift.

And therein lies the catch. The 5800X3D is geared as a gaming processor, and AMD says there is no uplift in content creation. Let’s check out the benchmark numbers.

My AMD-based test platform for the new processor remains the same as the one previously (although now with a newer graphics card used instead) used to review the Ryzen 9 5900X and 5950X and includes the following components:

Apart from the Ryzen 7 5800X and Ryzen 9 5900X, I will also compare the 5800X3D against Intel’s current flagship gaming processor, the 12th Gen Core i9-12900K. It’s important to note that the Intel processor is paired with faster DDR5 memory and a different ROG Maximus Z690 Hero motherboard instead.

My gaming benchmarks will be focused on CPU performance, where possible, like Ashes of Singularity: Escalation and Horizon Zero Dawn. The list isn’t exhaustive by any measure but there are enough different game engines and APIs variety to give us an idea of broader performance trends. I have also enabled ray-tracing on games that support this feature 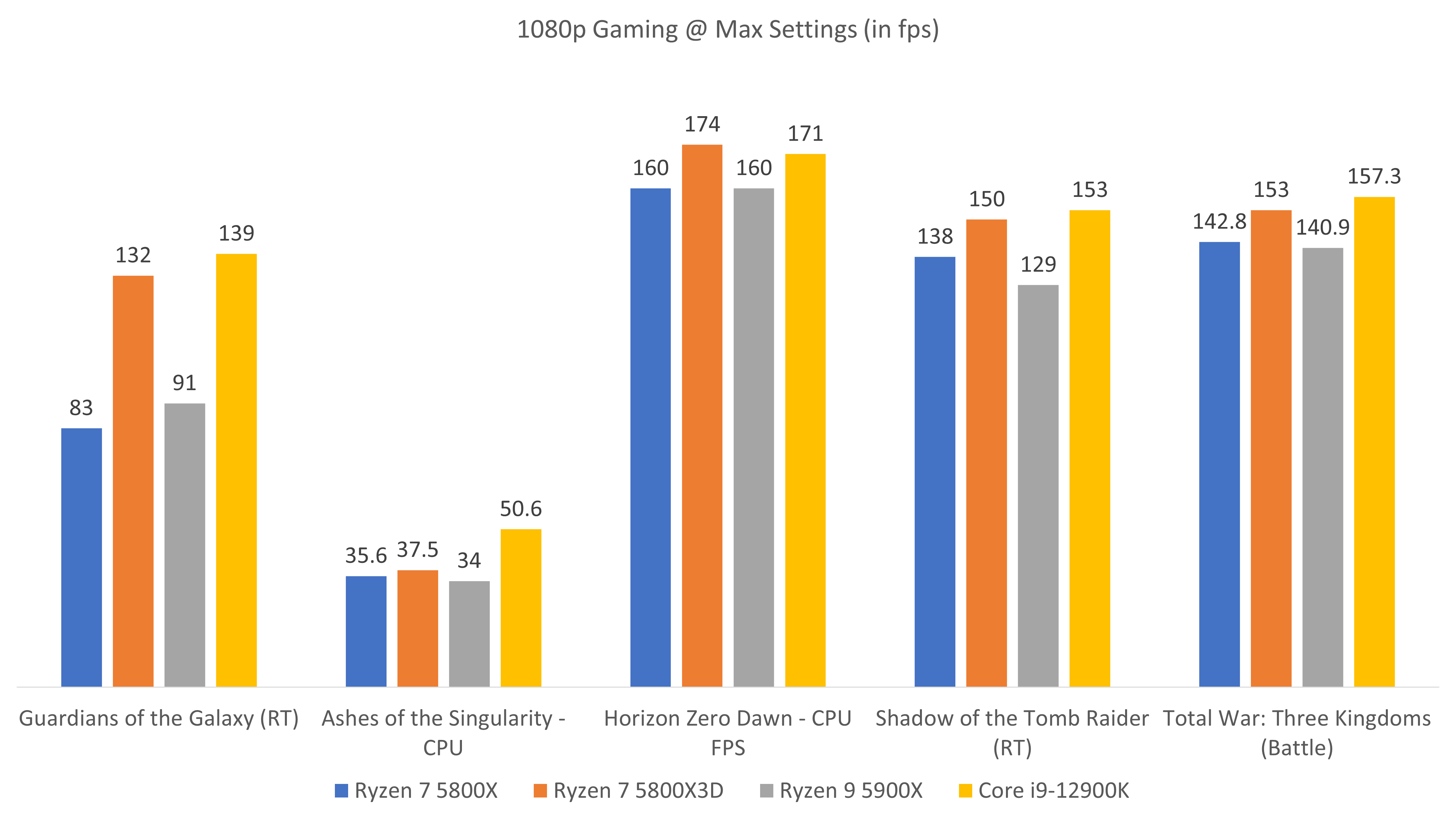 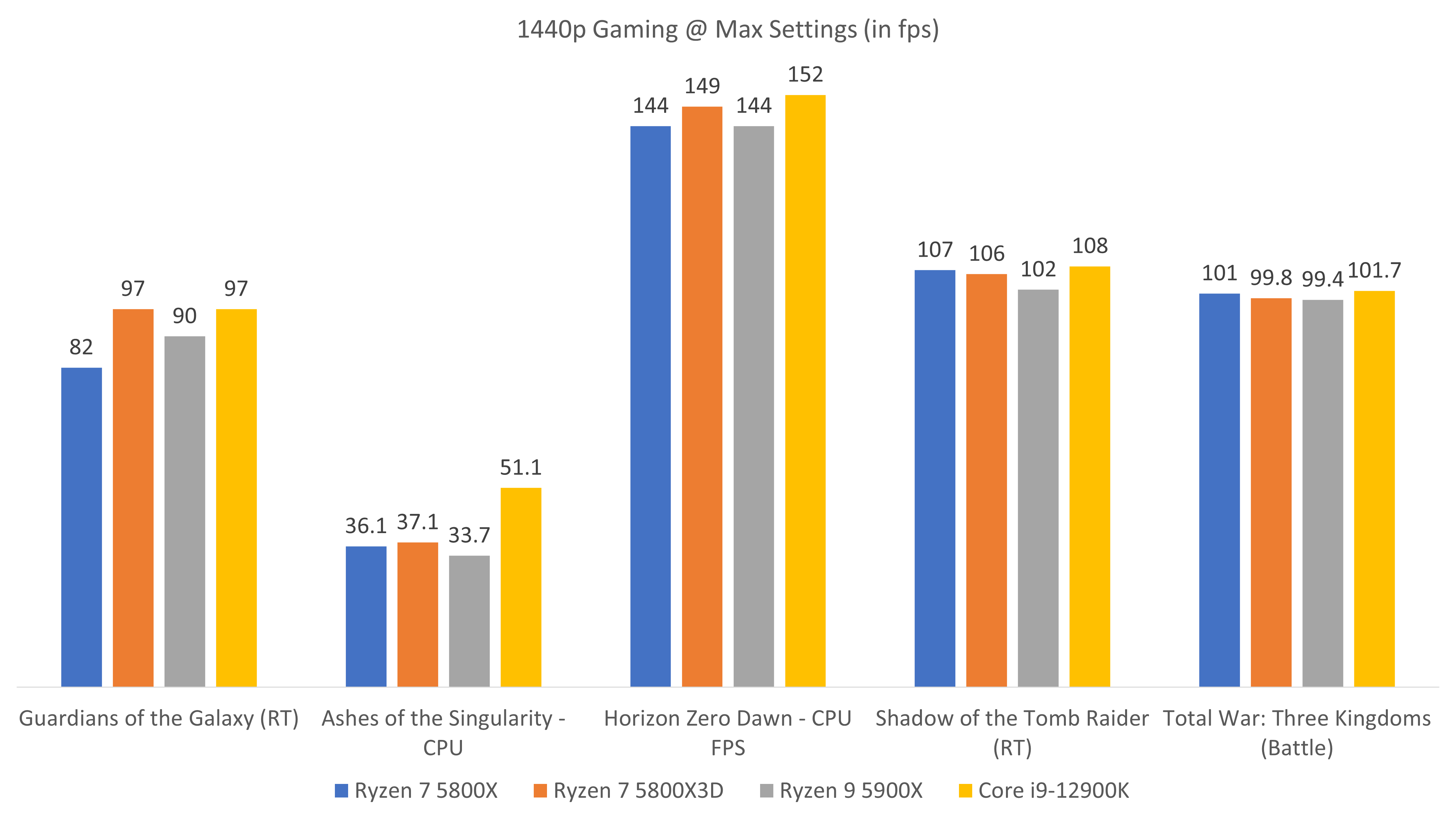 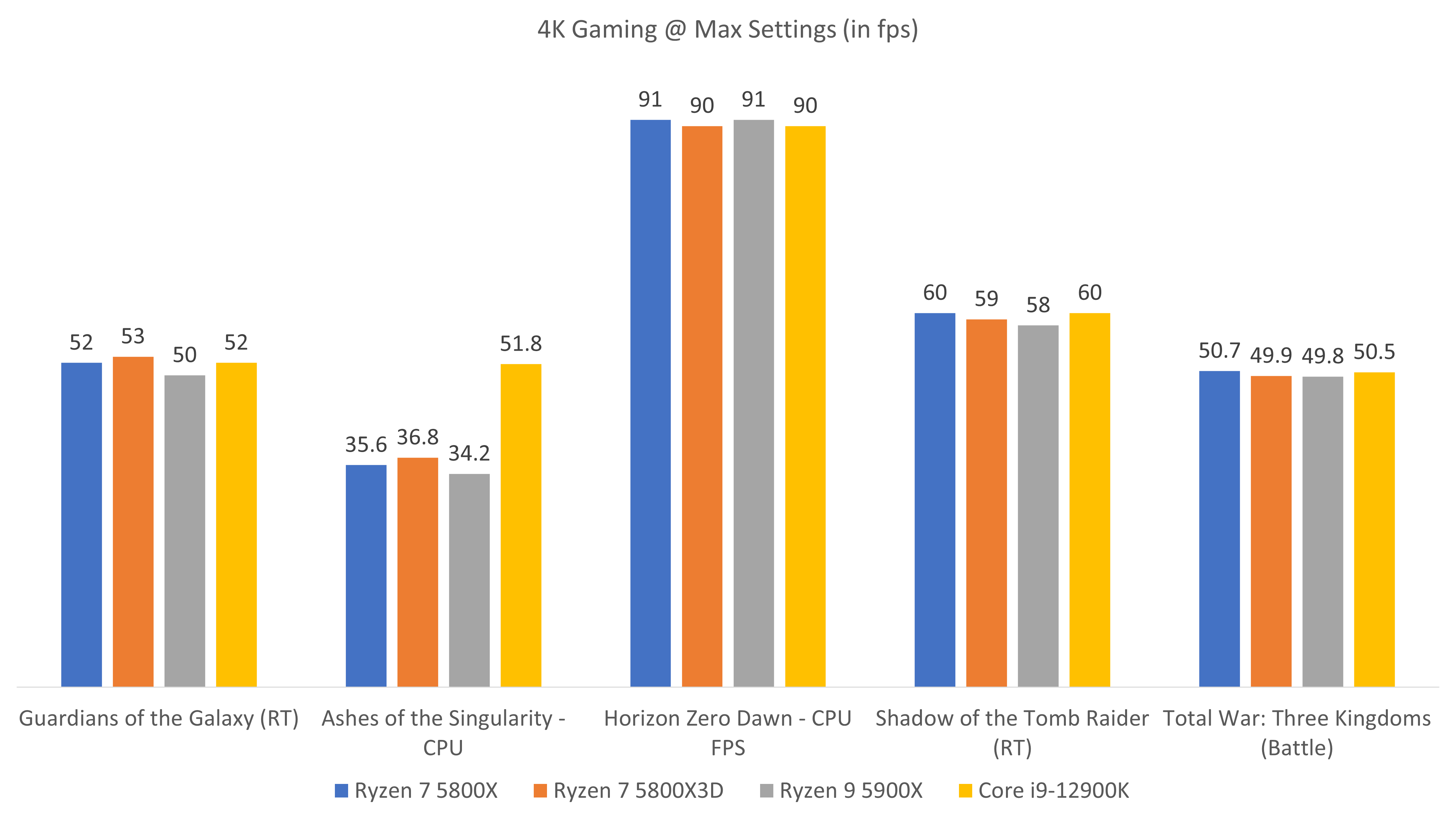 1080p benchmarking is a great measure of a CPU’s prowess because at lower resolutions, the GPU can process and transfer data much quicker than at higher resolutions. So, a CPU bottleneck happens here because the processor cannot keep up with the processing speed of the graphics card. Hence, we see wider performance gaps between all four processors here, with the Ryzen 5800X3D incredulously outperforming the Ryzen 9 5900X across all games, and even pushing the i9-12900K in games like Guardians of the Galaxy and Horizon Zero Dawn to the wire.

To test the processor’s performance when it comes to productivity and content creation tasks, I ran CineBench R20 to measure all four processors single-core and multi-core theoretical throughput standings. SYSmark 25 and PugetBench for Adobe Premiere Pro are also great benchmark as it runs real-world applications and mimics workloads. 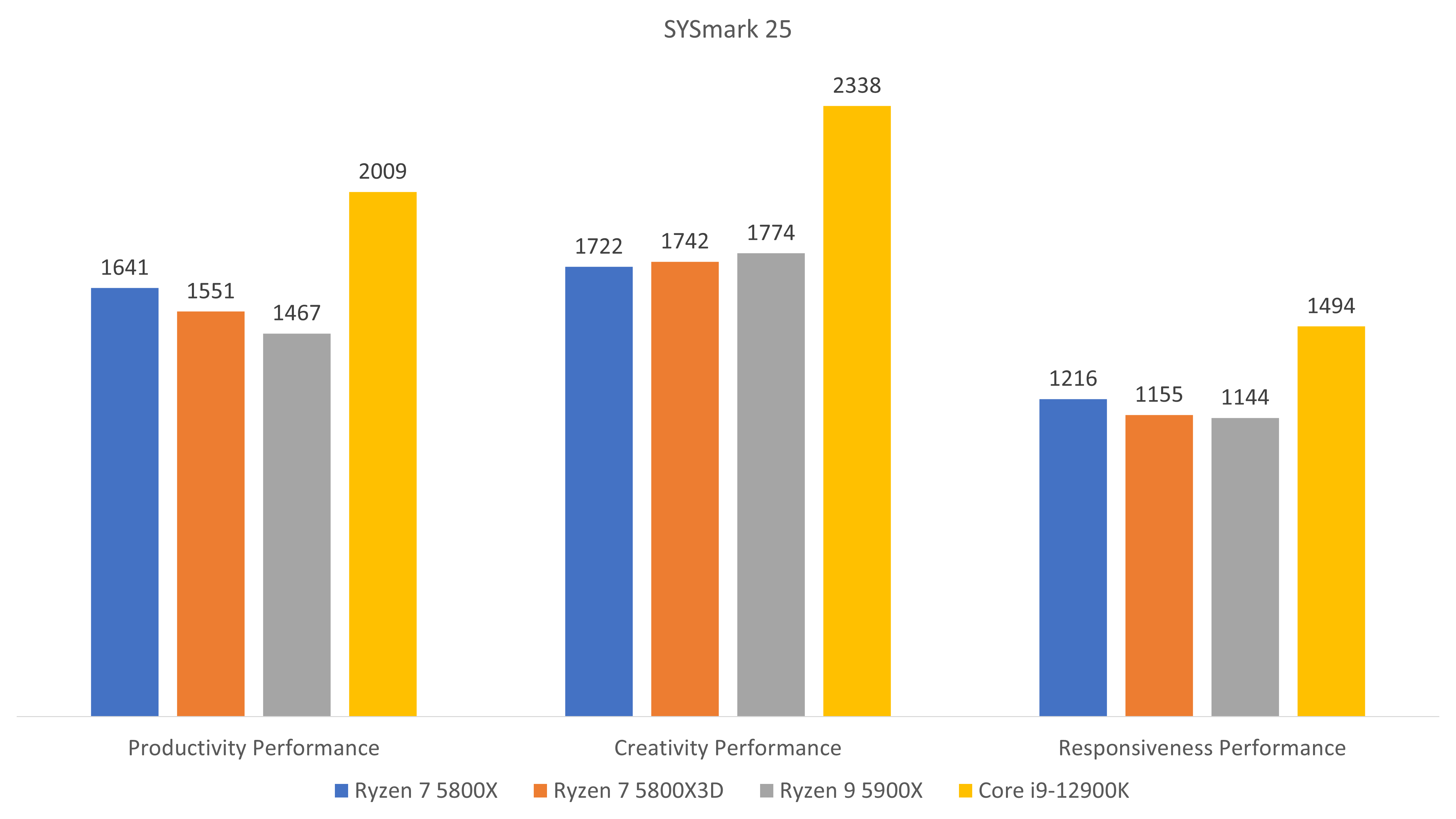 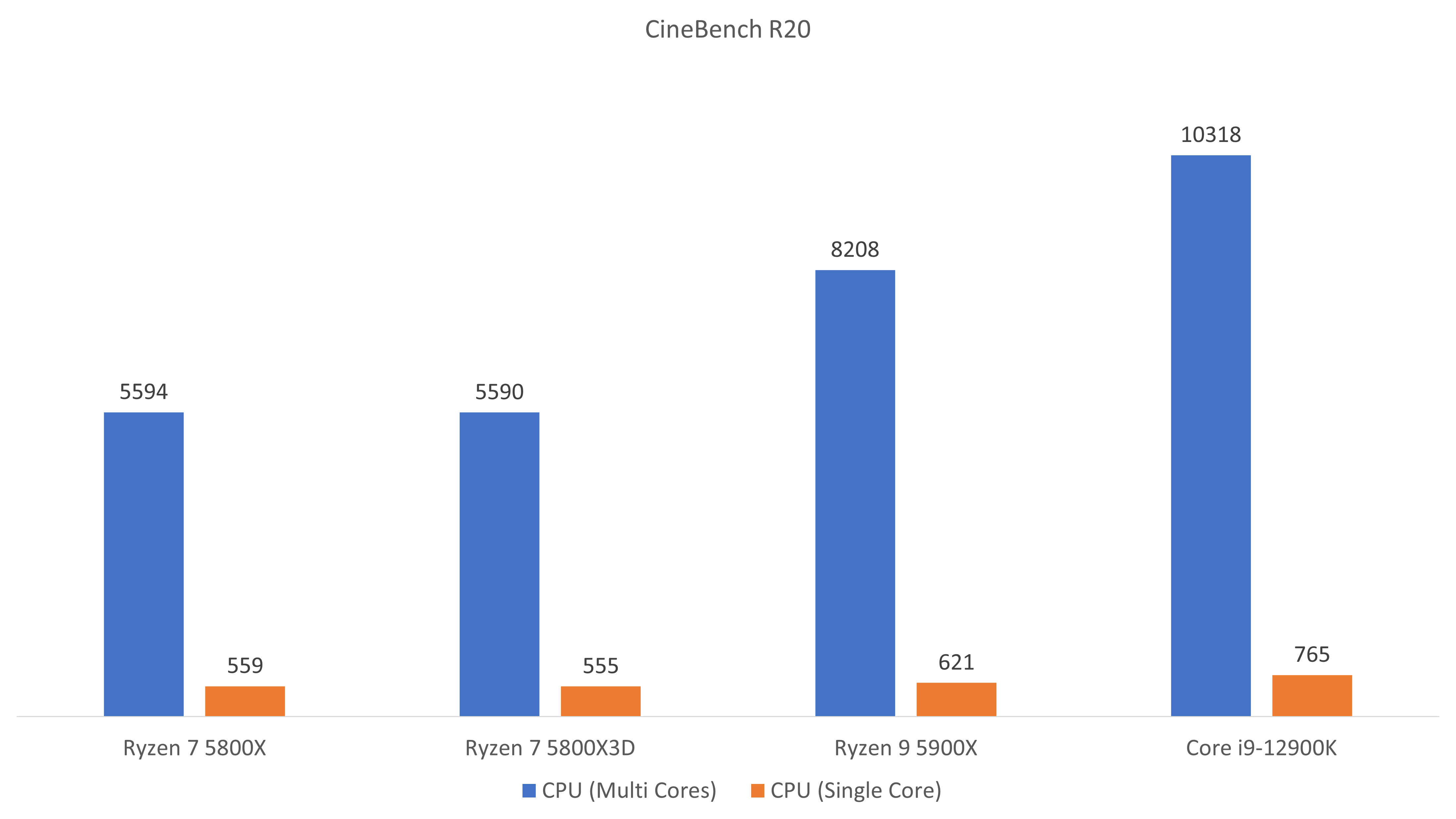 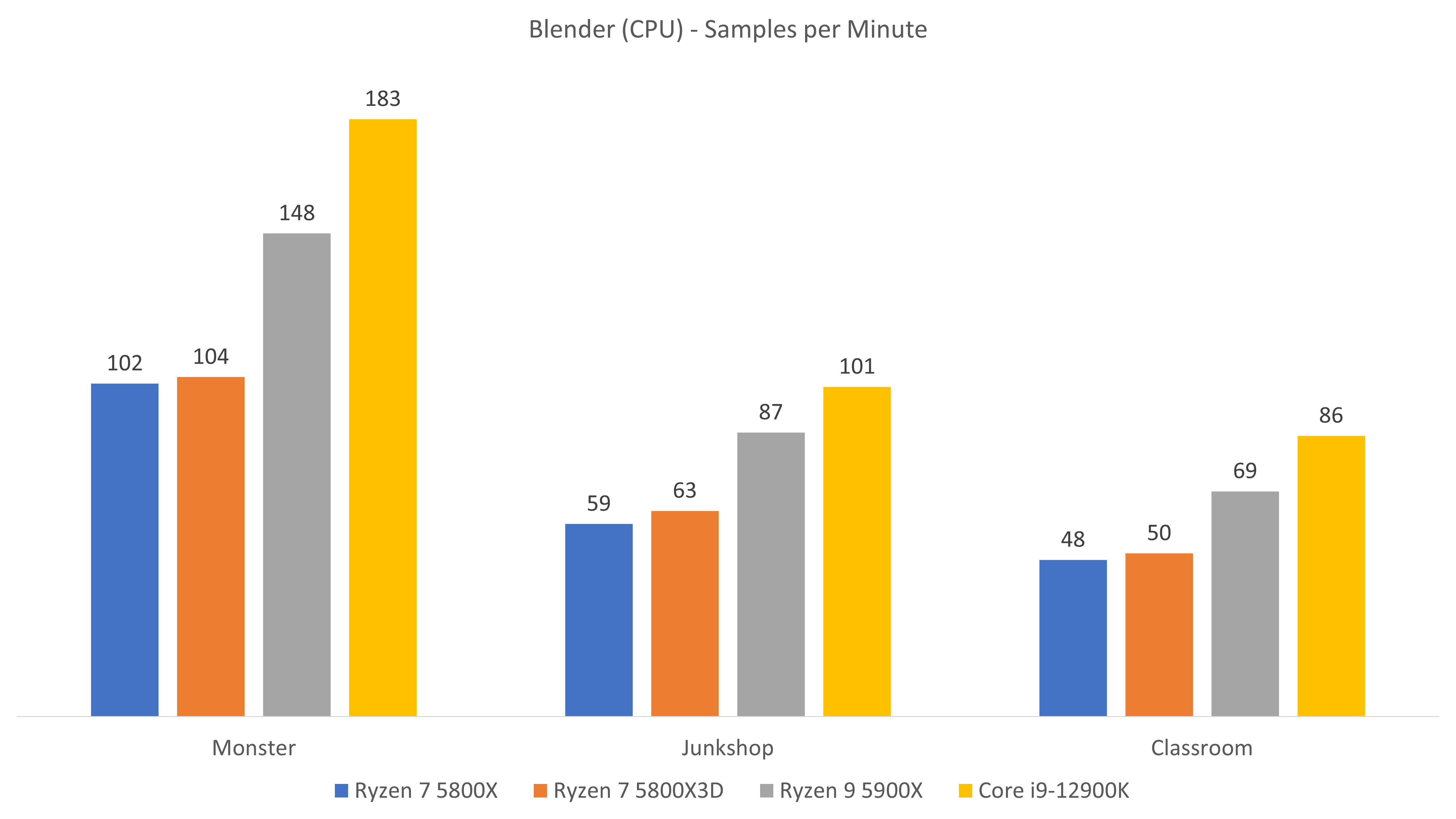 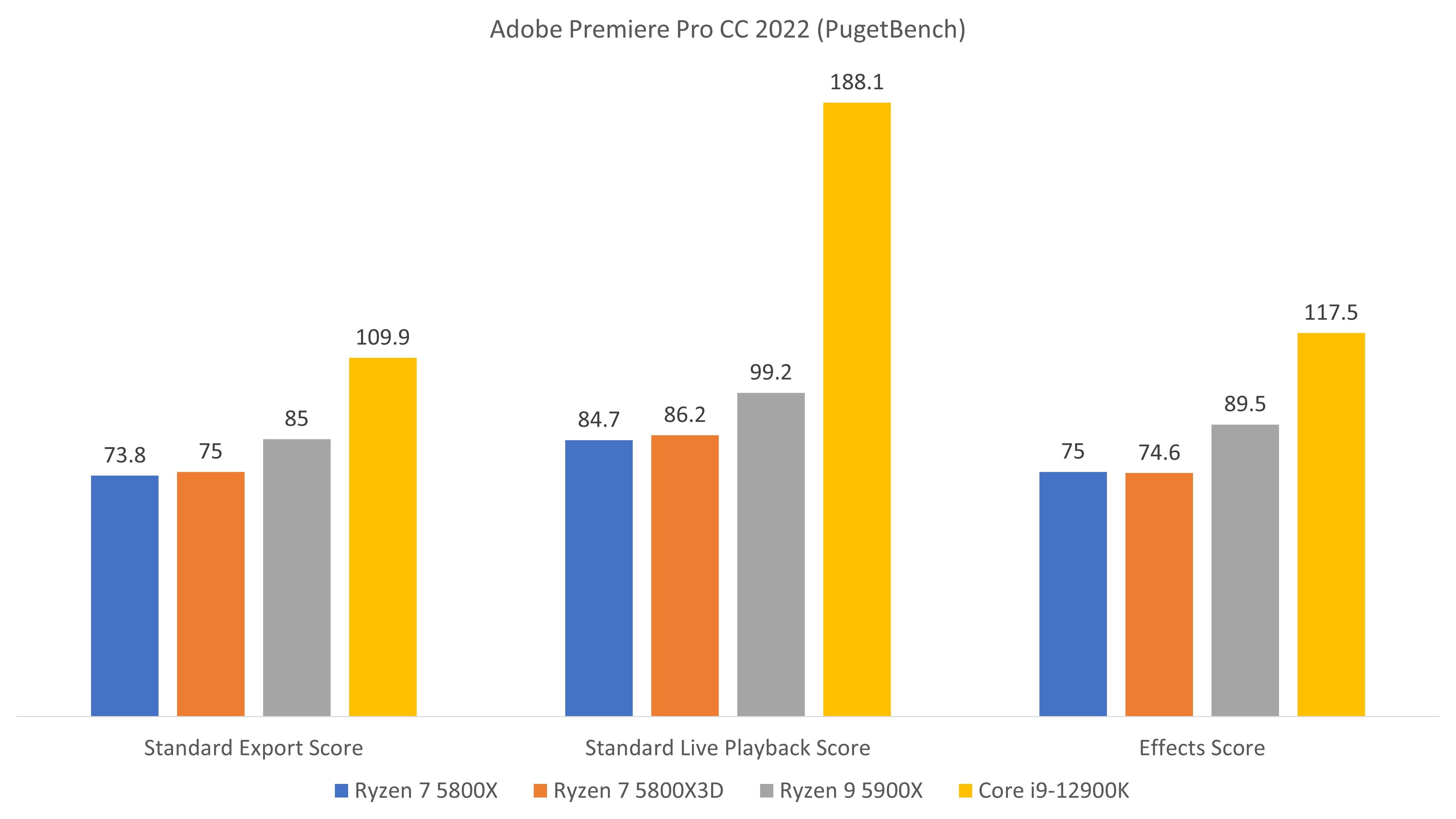 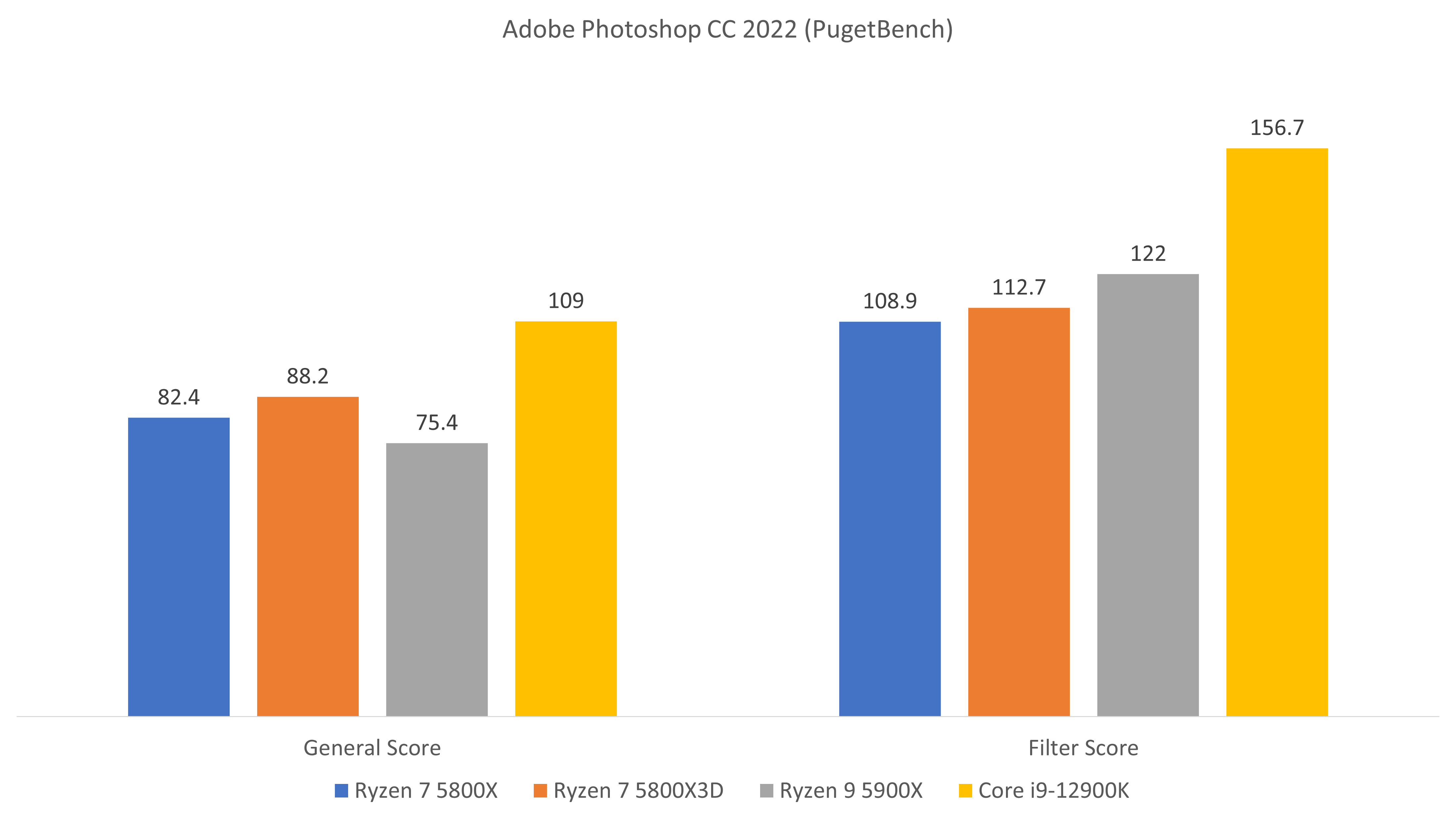 AMD set the expectations low when they said the Ryzen 5800X3D has no uplift in performance in content creation when compared to the original 5800X. But that’s not entirely true. While the processor largely lags behind the Ryzen 9 5900X and the Core i9-12900K, it does seem to perform better – albeit slightly – against the 5800X across all content creation tasks.

Let me get this out of the way first: the Ryzen 7 5800X3D is one heck of an interesting gaming processor. I say interesting, because the Ryzen 7 5800X3D also seems like an experiment, or a proof of concept, by AMD to serve as a reference point for its upcoming Ryzen processors. Just like how Intel has redefined their processor design with a new hybrid architecture (Performance and Efficient Cores) with its 12th Gen Core series, it looks like AMD will be weaponising Cache and turn it into a key advantage for their future consumer-grade processors.

On its own, it’s also a darn impressive CPU. It’s one thing to beat the Ryzen 9 5900X convincingly, but to almost match the Intel Core i9-12900K head-to-head while running at a lower TDP – 105W compared to the Intel processor’s 125W – and at a substantially lower price point is remarkable. AMD’s claim of the Ryzen 7 5800X3D being the fastest gaming processor is no bluff. 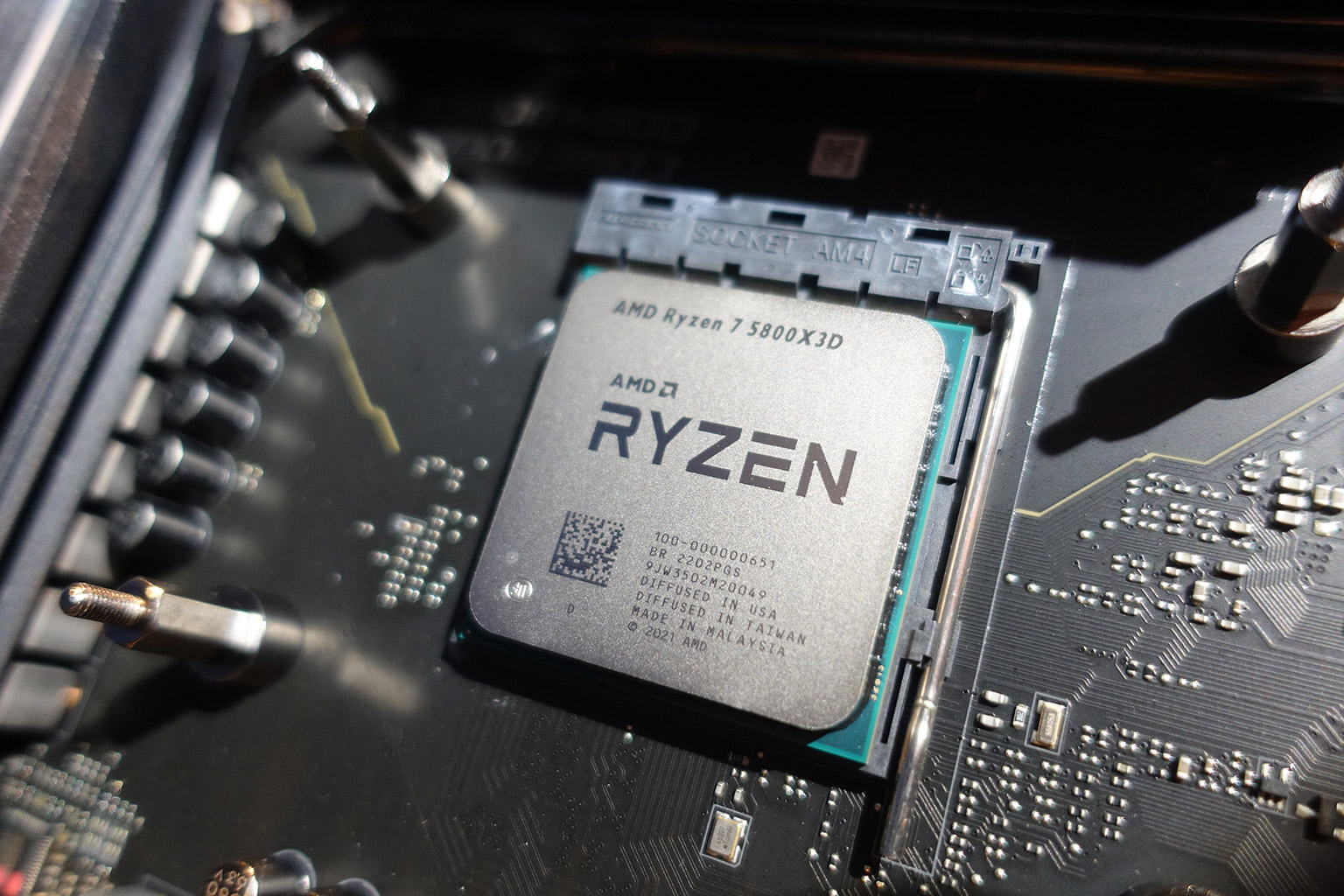 But there are other considerations, of course. For instance, as a complete processor, it still doesn't compare to the far superior Core i9-12900K (or even AMD's own Ryzen 9 5900X) which isn't just a great gaming processor but also for everything else. And since it's still sits on the Socket AM4 platform, it also does not comes with all the latest tech like DDR5 support and PCIe 5.0. In 2022, these are fast becoming "yesterday" tech. But if you're looking for that extra gaming juice, especially for those using older Zen 2 processors, and do not want to overhaul your existing setup, then the Ryzen 7 5800X3D is an excellent upgrade.

That said, it’s also the company’s 3D V-Cache technology that I’m truly excited about. The 5800X3D has shown us a sliver of what the new technology has to offer, and with 3D V-Cache obviously going to be a cornerstone of AMD’s future processors (perhaps even its GPUs?), alongside new architectural improvements, that could mean that the performance battle between it and Intel will only get more interesting.

Which can only be good news for us gamers.

Write a Review
Compare This | Specifications
Incredulous gaming performance
Affordable price
AM4 socket compatible
Still AM4 socket
No DDR5 nor PCIe 5.0
Marginal, if any, gains on non-gaming tasks
Our articles may contain affiliate links. If you buy through these links, we may earn a small commission.
Sponsored Links