The configurations of the test setups we used are listed below. We’ve actually used different coolers for the AMD and Intel systems as the Noctua cooler provided by AMD is the only AM4-compatible cooler with us at the moment. 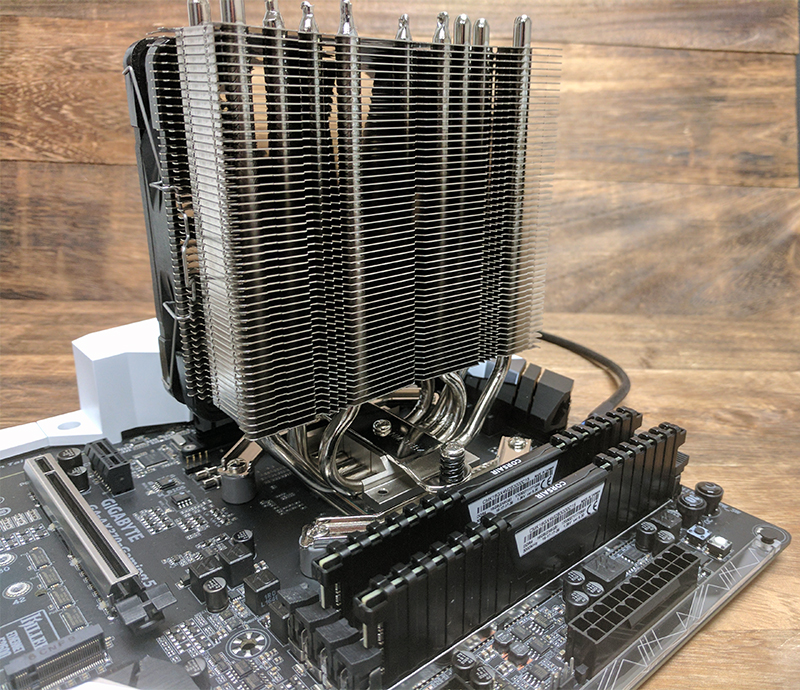 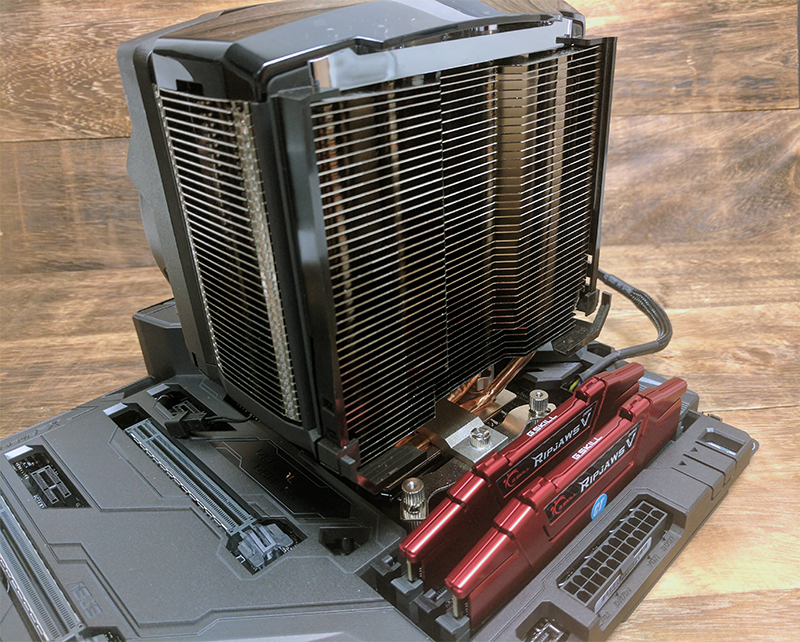 All the benchmarks were carried out in Windows High Performance mode (including that from Intel), as AMD tells us that this is needed to enable the full hardware functionality of the Ryzen processor's built-in SenseMI features. Both the voltage regulation and clock speed control feature of Ryzen's Pure Power and Precision Boost technologies can respond to varying workloads quickly (as fast as 1ms).  (Doesn't this sound like Intel's Speed Shift technology that first debuted in Skylake and improved again in Kaby Lake?) Under the default Balanced Performance mode, the OS can request which P-state to use, which could increase response times to as high as 30ms. High Performance mode instead hands over control from the OS to the processor, ensuring more granular control and maximum performance.

Beyond the core comparison between Ryzen and Kaby Lake, we've also provided selective comparisons with the best of Broadwell-E in certain tests as time was limited.

SYSmark is a business productivity benchmark suite that measures the response times of tasks on a PC using real-world applications in the areas of office productivity, media creation, and data and financial analysis. Task response times from simulated user input are used to generate a performance rating that reflects actual user experience, so the faster a PC responds to application workloads, the higher its score will be. The method of measuring response times can take many forms, such as the time it takes for an application to show a pop-up completion message, or how long it takes a progress dialog to disappear and for a user to regain application control.

The Intel Core i7-7700K was overall around 15 per cent faster than the Ryzen 7 1800X. It looks like the lower clock speeds of the Ryzen 7 set it back against the higher clocked Core i7-7700K, even though the latter is just a 4-core/8-thread part. Developers often have to code their applications to explicitly take advantage of multiple cores, and it looks like most productivity apps haven’t progressed much to take advantage of more than four cores. 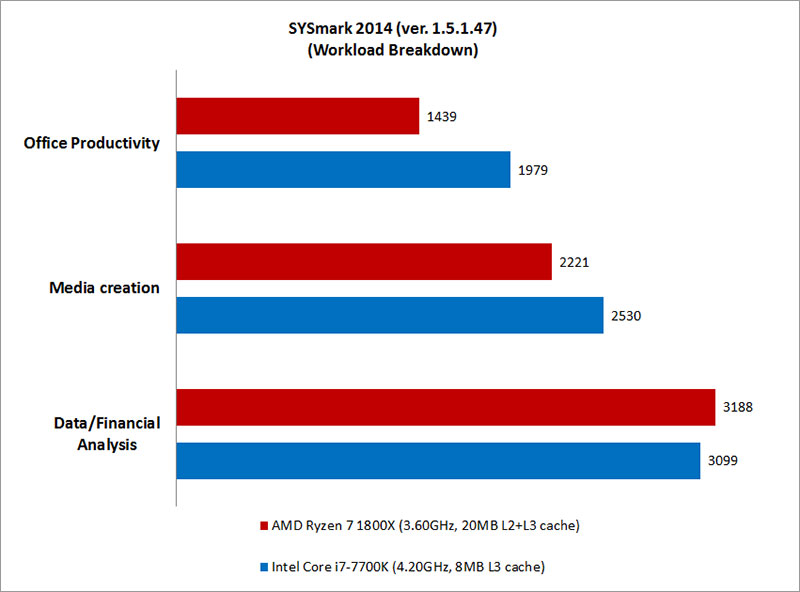 Since AMD has been comparing their top Ryzen to Intel's Broadwell-E, we'll also share some numbers based from our recent Intel X99 motherboard shootout. Note that we tested with an Intel Core i7-6950X as opposed to AMD referencing the one rung lower Core i7-6900K. Well, one is a 10-core part running at lower clocks versus the 8-core part running higher clocks; logically speaking they should even out any differences, subject to the bias of each particular test scenario. We decided to showcase scores from an ASUS motherboard, since Kaby Lake test rig was also using the same board brand.

As can be seen from the tabulation, the best of Ryzen isn't quite a match for the best of Intel's mainstream or high-end where everyday-use applications are concerned. Still, it's quite a showing and is definitely the strongest performance AMD has put up in a long while.

SPECviewperf is used to measure the 3D graphics performance of systems in professional applications. Each individual workload, called a viewset, represents graphics and content from an actual real-world application. SPECviewperf actually runs a total of eight different viewsets, but we’ve picked the four which have the greatest performance variation across CPUs display here.

The Ryzen 7 didn’t do too well here, coming in behind the i7-7700K in all our workloads. This suggests that modeling and rendering applications like those here still aren’t very effective at making use of multiple cores, so you’re probably better off going for fewer cores and higher clock speeds (the Core i7-7700K can boost to 4.50GHz) if you do a lot of this sort of work. 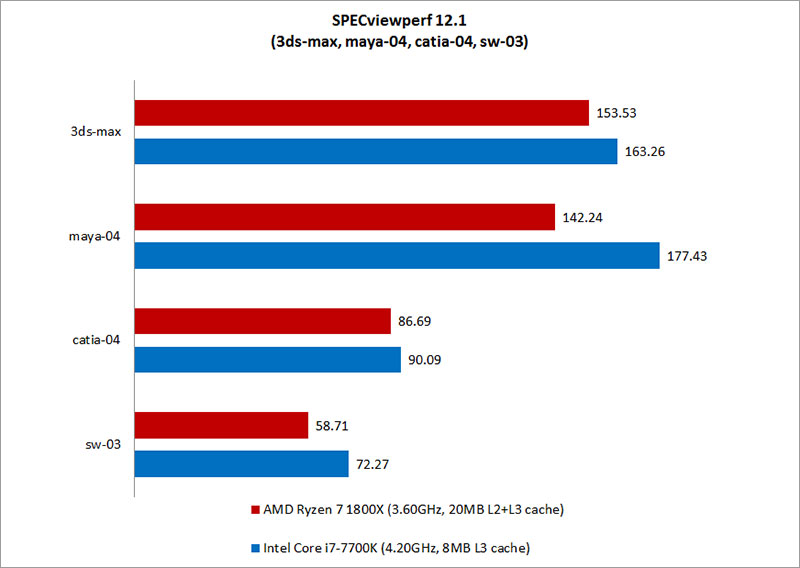 Now, what if we compare it with the best of what Broadwell-E has to offer? Let's draw out the comparison once more, but this time just focusing on one viewset - maya-04:-

Well, as we deduced above, these rendering applications aren't quite as well threaded as we would like them to be and the Intel's mainstream Core i7-7700K comes out well ahead with its aggressive higher clocks, even though it's just a four-core part natively.

Cinebench R15 is a better indicator of the Ryzen’s 7 performance because of its ability to utilize up to 256 threads to evaluate a processor’s performance in a photorealistic 3D rendering. We ran both single-core and multi-core benchmarks to evaluate single-threaded performance and multi-threaded scalability here.

The multi-threaded benchmark is where the Ryzen 7 really shines, and it shot ahead of its Kaby Lake counterparts in the multi-core benchmark with its 8 cores and 16 threads. Here, it was 63 per cent faster than the quad-core Core i7-7700K.

It did lag behind in the single-threaded benchmark, which was expected of its lower base 3.60GHz clock speeds per core. Remember, the Kaby Lake part has a 4.20GHz base clock, and can boost till 4.50GHz, so it naturally came out ahead here. Once more, let's break out further to see how a Broadwell-E compares in this mix:-

Over here, it comes within 15% range of the Intel Core i7-6950X and it solidifies AMD's stance that the Rzyen was made for well-threaded applications. In AMD's official marketing literature, it scored a tad higher than what we've experienced and is able to dethrone a Core i7-6900K (8C/16T) processor that was claimed to score 'only' 1474 points.

The Ryzen 7 was very impressive here too, shaving about 35 per cent off the encode time compared to the Core i7-7700K. These additional cores will come in handy especially in CPU-intensive games, and one of AMD's main talking points is the improvement to multi-tasking. Instead of a straight performance bump, you should look forward to less of a performance hit when attempting to do multiple things, such as playing a game and streaming simultaneously. 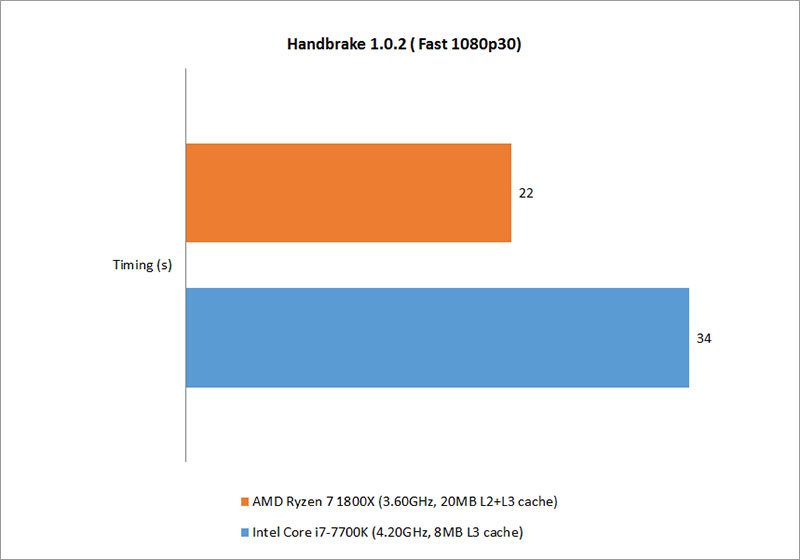 To test power, we ran the energy-01 viewset in SPECviewperf 12.1 and recorded the peak power consumption.

Power consumption figures were rather close across the processors, but it's nice to see Ryzen's 8-core chip consuming slightly less power than the quad-core Core i7-7700K. Ryzen's Pure Power and Precision Boost features are capable of modulating frequency, voltage, and temperature on-the-fly, and that appears to have worked out here. For once, it seems like AMD's power consumption figures are about on par with Intel's - but it's subjective when it comes to performance-per-watt comparisons since AMD isn't exactly leading in raw performance although it has put up a good show.

Remember, AMD recommends you to put Windows into High Performance mode in order to get the most out of Ryzen's hardware-based monitoring features. 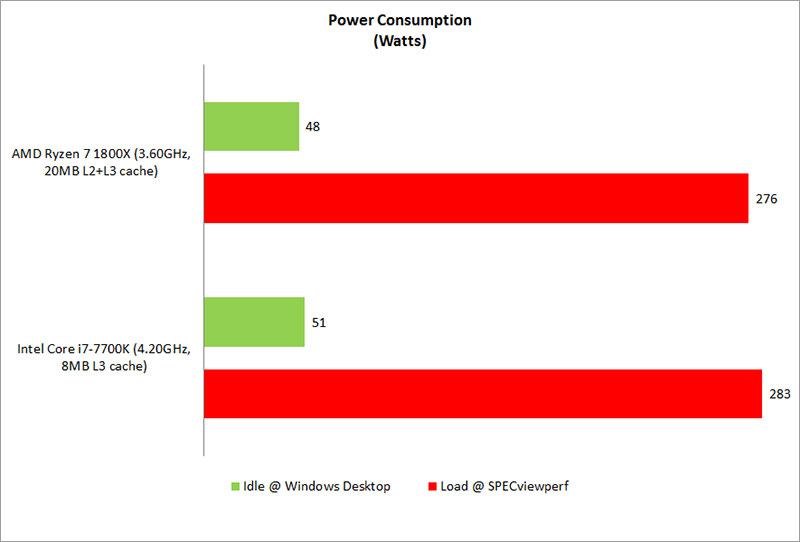 What's even more interesting is to see how well an even more complex chip like the Core i7-6950X chalk up power consumption figures that are actually no more than the Core i7-7700K.

Write a Review
Compare This | Specifications
Brings 8C/16T CPUs to a price point closer to the mainstream
Excellent multi-threaded scalability
Strong video encode capabilities
Underwhelming overclocking headroom
Low single-core clocks still drag it down in many workloads
Loses out to the cheaper Core i7-7700K at 1080p resolutions
Our articles may contain affiliate links. If you buy through these links, we may earn a small commission.
Sponsored Links