The Core i7-7700K had an 11 per cent lead over the Ryzen 7 in Fire Strike, but the Ryzen 7 actually managed to inch ahead in the more demanding Fire Strike Extreme and Ultra benchmarks. AMD is positioning Ryzen 7 as a strong solution for 4K gaming, and that’s borne out in our 3DMark scores at least. 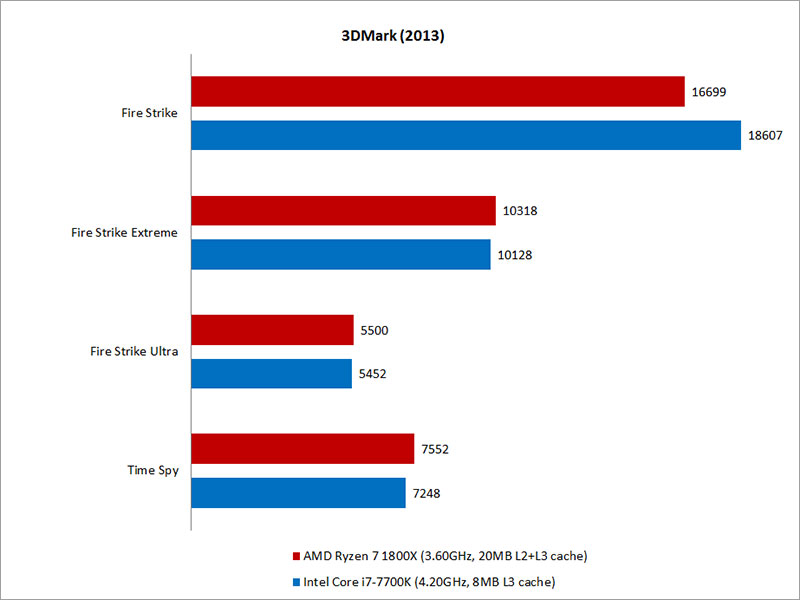 Now, let's take a peek at how Broadwell-E stacks up with the rest:-

Looks like AMD has made great progress and has caught up with the best of what Intel has to offer! However, as we all know, 3DMark is still a synthetic test at the end of the day and it only presents the possibility of what to expect if games are designed as ideally as the benchmark itself. The real-world games we've lined up below convey a slightly different story though.

However, when it comes to running games at 1080p, the Ryzen 7 doesn’t do so well. In DirectX 12 mode at 1080p and High settings, the Core i7-7700K turned out to be a good 50 per cent faster. At Ultra settings, the performance differential was around 14 per cent, suggesting that the Ryzen chip is more competitive with demanding settings or higher resolutions.

It also seemed more capable of taking advantage of the features of DirectX 12, probably due to the new API’s ability to use multiple cores more effectively. At Ultra settings, performance increased by 28 per cent when moving from DirectX 11 to 12.

That said, we’ve been told that Oxide Games, the developer of Ashes of the Singularity, is working to scale its Nitrous game engine to take better advantage of the full 8-core/16-thread architecture on Ryzen, so you might possibly expect better numbers in the future. As seen in the CPU-focused benchmark below, the higher clock speeds of the Core i7-7700K still helped it beat the Ryzen CPU. Deus Ex: Mankind Divided is one of the most demanding games out there right now, and the Ryzen 7 came up close behind the Core i7-7700K. However, oddly enough for us, performance consistently dropped in DirectX 12 mode.

At Ultra settings, all the CPUs actually performed quite close to each other, and it looks like the GPU may actually be the limiting factor here. There was also no discernible improvement in moving from DirectX 11 to 12 at these settings. Finally, we overclocked the Ryzen 7 1800X using AMD’s own RyzenMaster utility to see how far it could go. We managed to hit 4.05GHz at 1.4V with our Noctua cooler, which is a bit disappointing given that the XFR boost actually goes up to 4.1GHz. Still, we were working with a relatively modest Noctua air cooler, and it's entirely possible that you may see better results with a more robust cooling solution.

Overclocking was a lot more impressive on the Kaby Lake chips, and we were able to overclock the Intel processor to over 5.0GHz on air.

So while the Intel chips clock higher and will probably lead in the moderately threaded workloads as seen from some of the earlier non-overclocked results, the AMD Ryzen 7 1800X still has a significant lead in performance. This again suggests that AMD Ryzen excels well in applications that are highly designed to scale with the presence of multiple cores/threads even though it couldn't be clocked as much.