The first of our real-world gaming benchmark, Rise of the Tomb Raider is a popular third-person shooter game by Crystal Dynamics, Eidos. We ran it under a ‘Very High’ video setting, and now we see the RX Vega 64 lagging behind the GTX 1080, even if by a bit. What’s interesting is that while it seems to fall slightly behind the GTX 1080 at lower resolutions, the RX Vega 64 is very much on par with that card at 3,840 x 2,160 (or 4K) resolution. 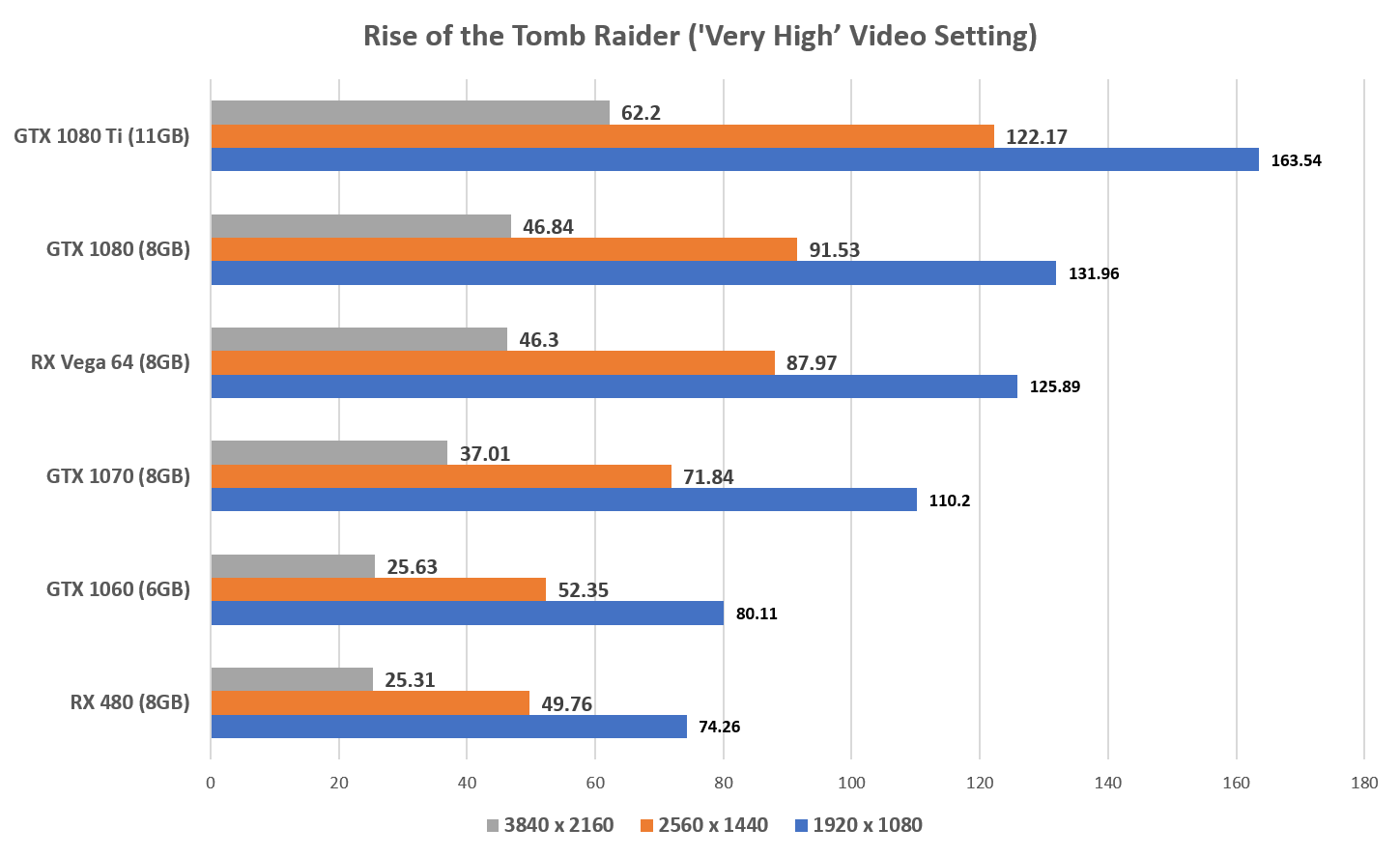 AMD-based GPUs have typically fared well in Ashes of the Singularity benchmarks because the game takes advantage of asynchronous compute/shading in DirectX 12, which are available in recent Radeon cards – including the RX Vega 64. The GTX 1080 is fully capable of asynchronous computing too, but NVIDIA’s technique differs from AMD and does not work as well for certain games like Ashes of the Singularity.

This is very apparent if you look at the results between the RX 480 and the GTX 1060, where the disparity in performance (despite the small difference in memory) is quite large. So, it is a tad strange to see the RX Vega 64 not gaining any sizeable leads against the GTX 1080, even though it did score a slightly faster result at 1440p resolution. Again, and we are being presumptuous here; the current drivers might not yet be doing justice to the RX Vega 64. 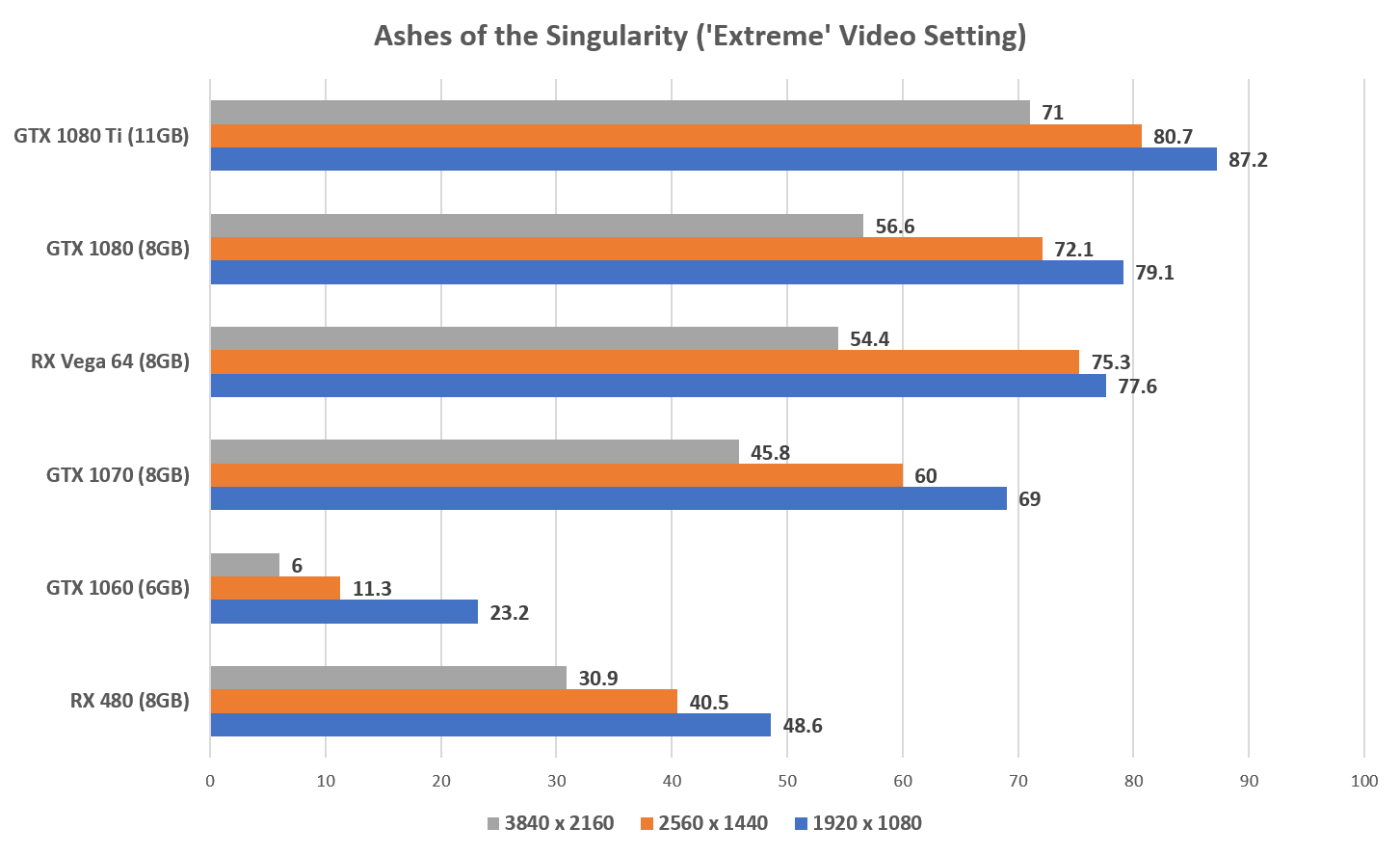 Total War: Warhammer is an AMD Gaming Evolved release, meaning the developers had worked with AMD to improve the game on AMD GPUs. Especially when running on DirectX 12 mode. Here we see for the first time in our games benchmarks, that the RX Vega 64 being faster than the GTX 1080. Surprisingly, it even managed to be on par with the reigning champion GTX 1080 Ti when running at 1080p resolution. Not what we had expected, even for an AMD-optimized game. 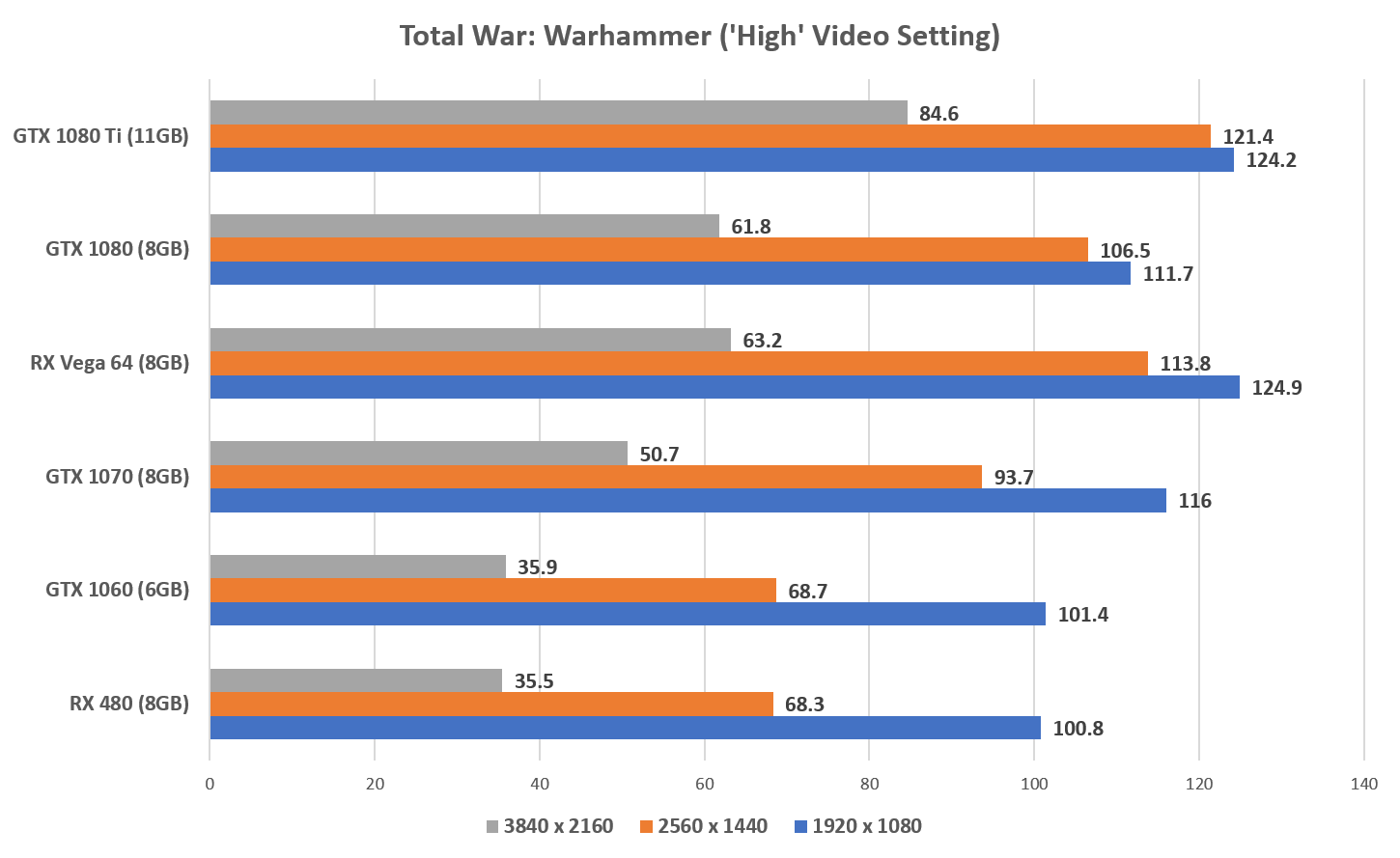 Mankind Divided is a hardware demanding game and another AMD Gaming Evolved release, and so it’s not a surprise to see the RX Vega 64 outperforming the GTX 1080 quite convincingly. This time, however, the RX Vega 64 did not even come close to the GTX 1080 Ti. 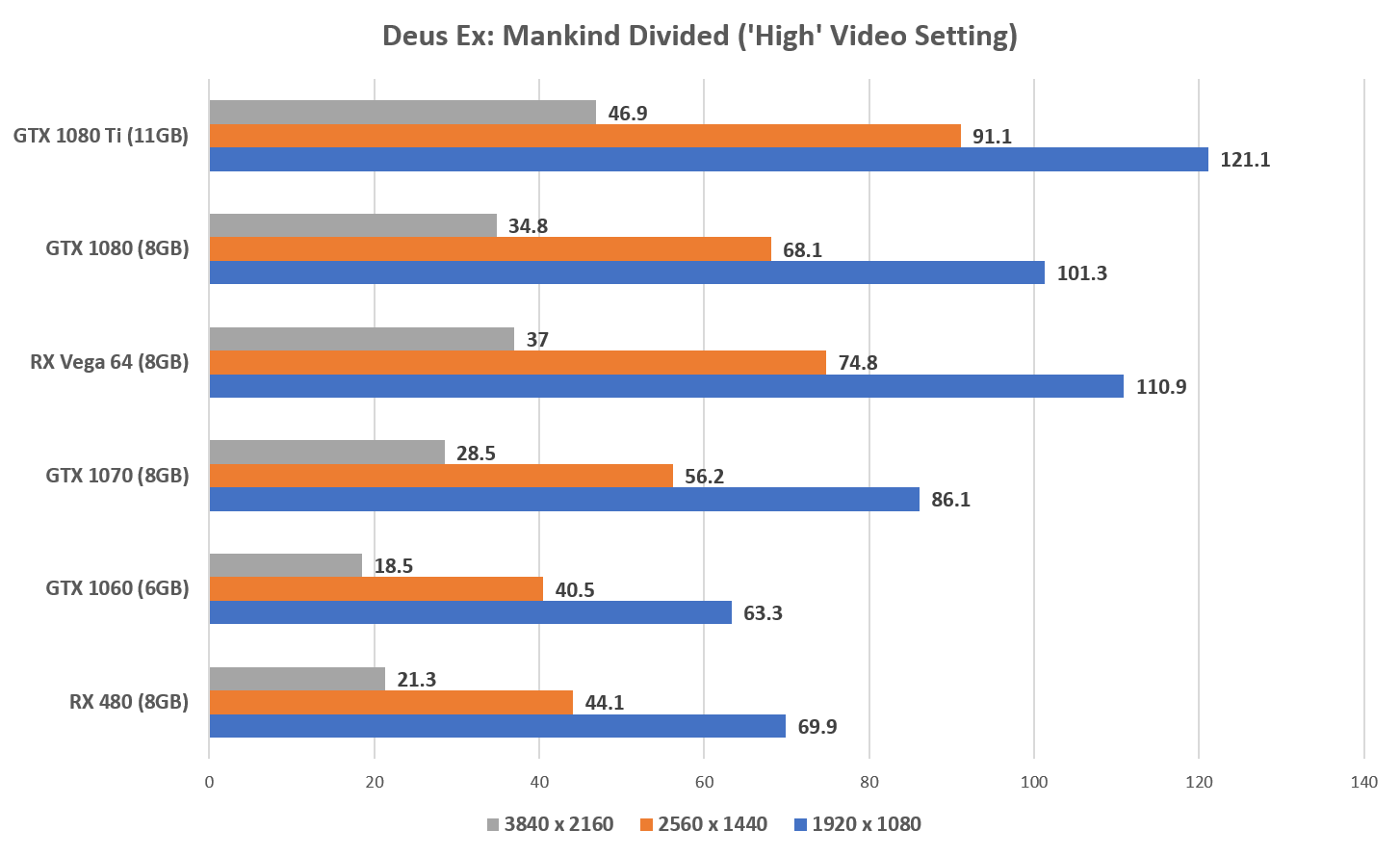 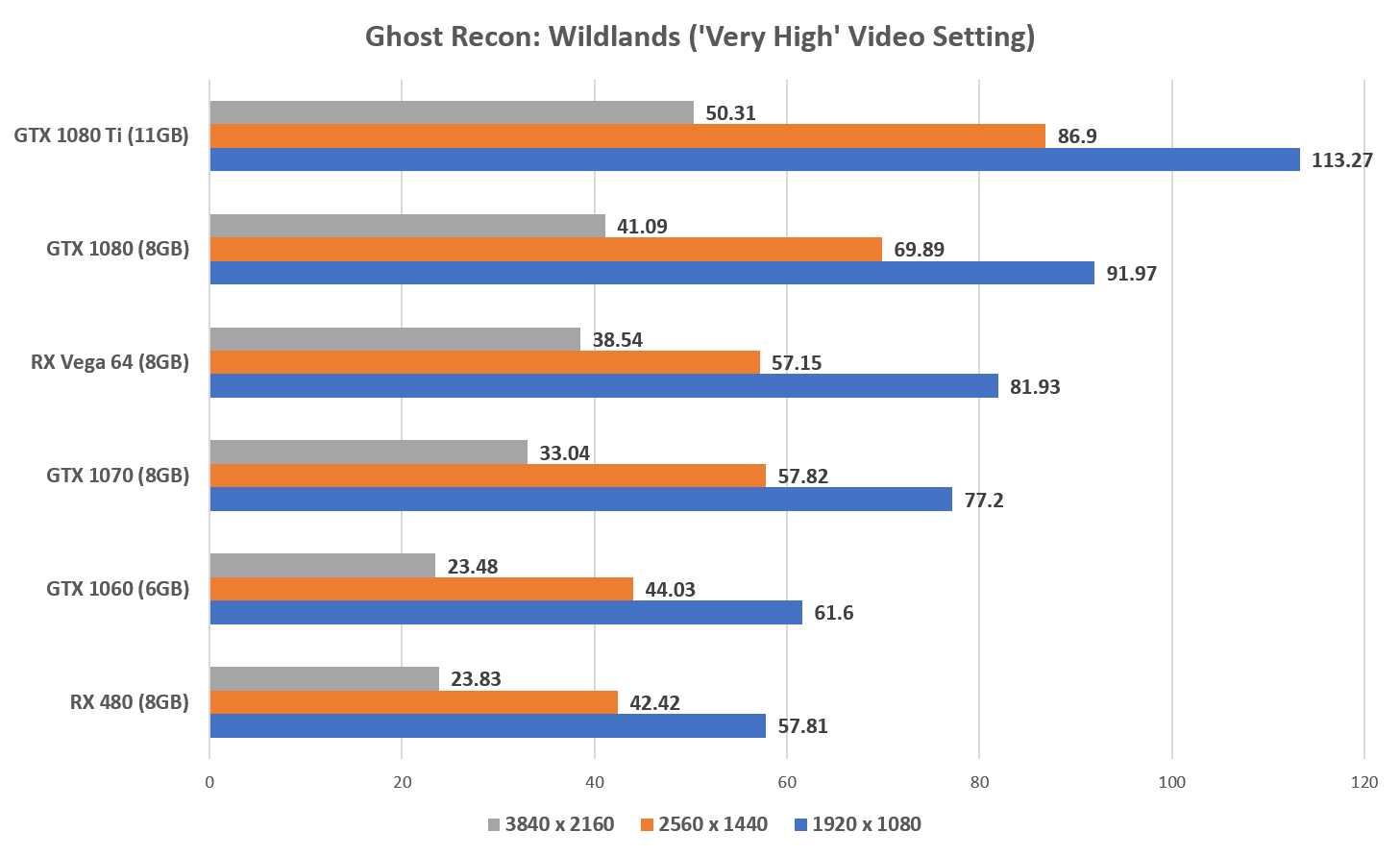 Unlike the games tested earlier, Gears of War 4 is GPU agnostic – the game has no marketing or known optimization collaboration with the red nor green camp. Yet, we see the RX Vega 64 once again being edged out by the GTX 1080. But to put things into perspective, the differences are quite minute this time at the 1080p and 1440p resolution tests, with just 7% performance separating both cards. The margin between both cards is even slimmer at 4K resolution. 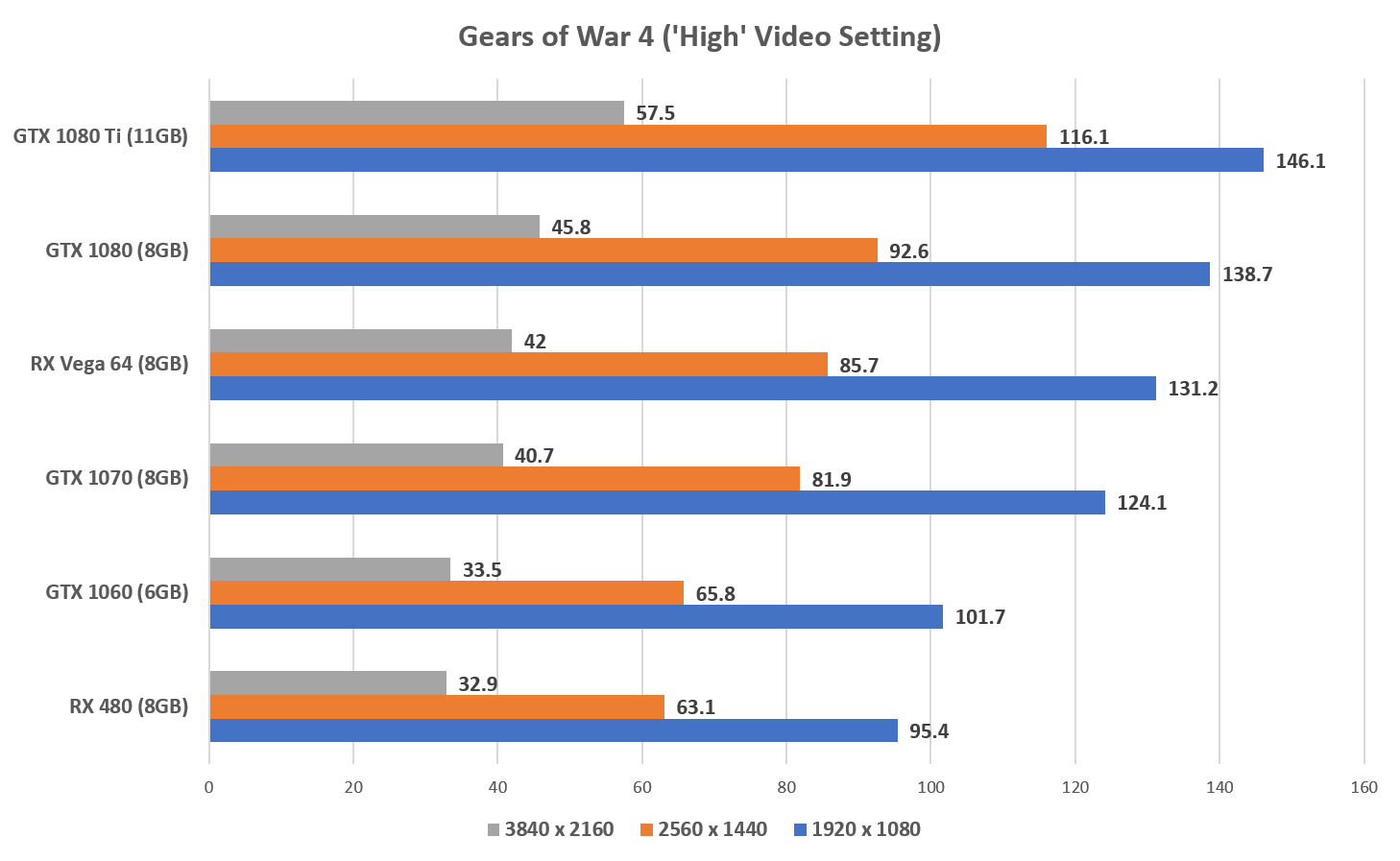