Review: Mortal Kombat has lots of fan service to offer but not much else
Product Listing
AlbatronAMDAorusASUSChaintechClub 3DEVGAForce3DGainwardGalaxGalaxyGeCubeGigabyteHISInno3DLeadtekManliMSINVIDIAPalitPowerColorSapphireSparkleXFXXpertVisionZotac

The detailed specifications of the graphics card testbed system used are as follow:

As previously mentioned, the Radeon RX Vega 64 is made to stand toe to toe with the NVIDIA GeForce GTX 1080. Besides the Founders Edition of that card, we have also included the GTX 1070 and GTX 1080 Ti Founders Edition cards and the Radeon RX 480 too. The idea is to give us a good gauge and comparison of where AMD’s flagship card stands in the competition pool. Both the RX 480 and RX Vega 64 cards used are also reference boards, so all the cards here run at their default specifications – without any factory tinkering that you’d expect from third-party cards.

For all benchmarks, the driver version used for all NVIDIA graphics cards is ForceWare 385.28. It is worth noting that the newer Crimson ReLive 17.8.2 driver was not available for the RX 480 at this point of writing.

The benchmarks we are using include the regular staples such as the latest 3DMark (2016), VRMark and a handful of the latest DirectX 12-based games. They are as follows:- 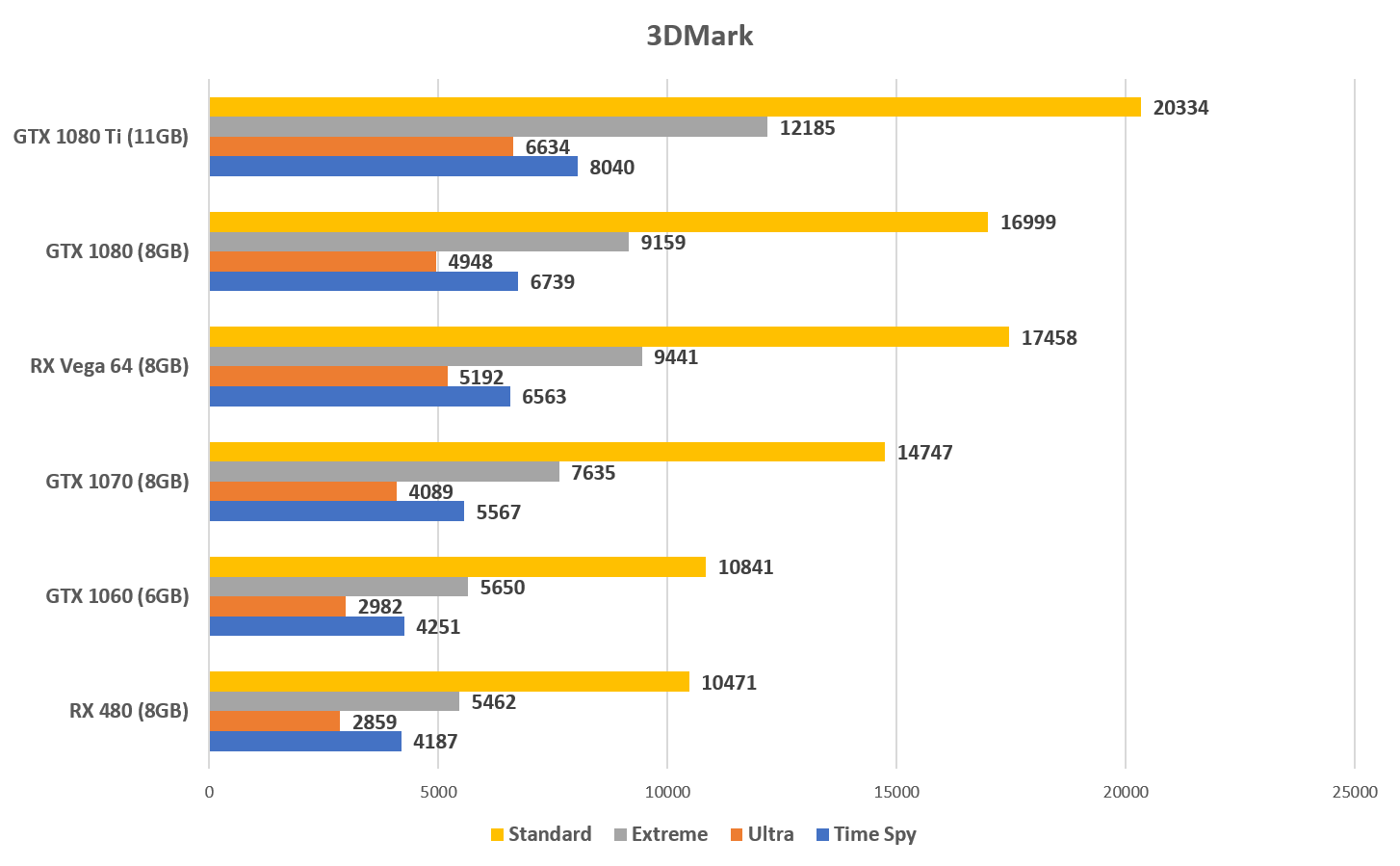 In 3DMark, the results for all three GTX 10-series cards were as expected, with the GeForce GTX 1080 Ti holding on to its crown. But it’s really the fight between the GeForce GTX 1080 and Radeon RX Vega 64 that we are interested in, and we can see the AMD card edging out the former in most of the tests except for Time Spy, a DirectX 12 focused test. We suspect this could be due to driver optimization issues on the part of AMD. Which also begets a question; are we possibly not seeing the full potential of the RX Vega 64 yet?

Virtual Reality is still a relatively niche gaming platform, but both NVIDIA and AMD have been talking up about their respective cards as being optimized (in terms of power) for VR gaming. So how does the Radeon RX Vega 64 compare, to the one-year older GeForce GTX 1080 and even its sibling, the Radeon RX 480? 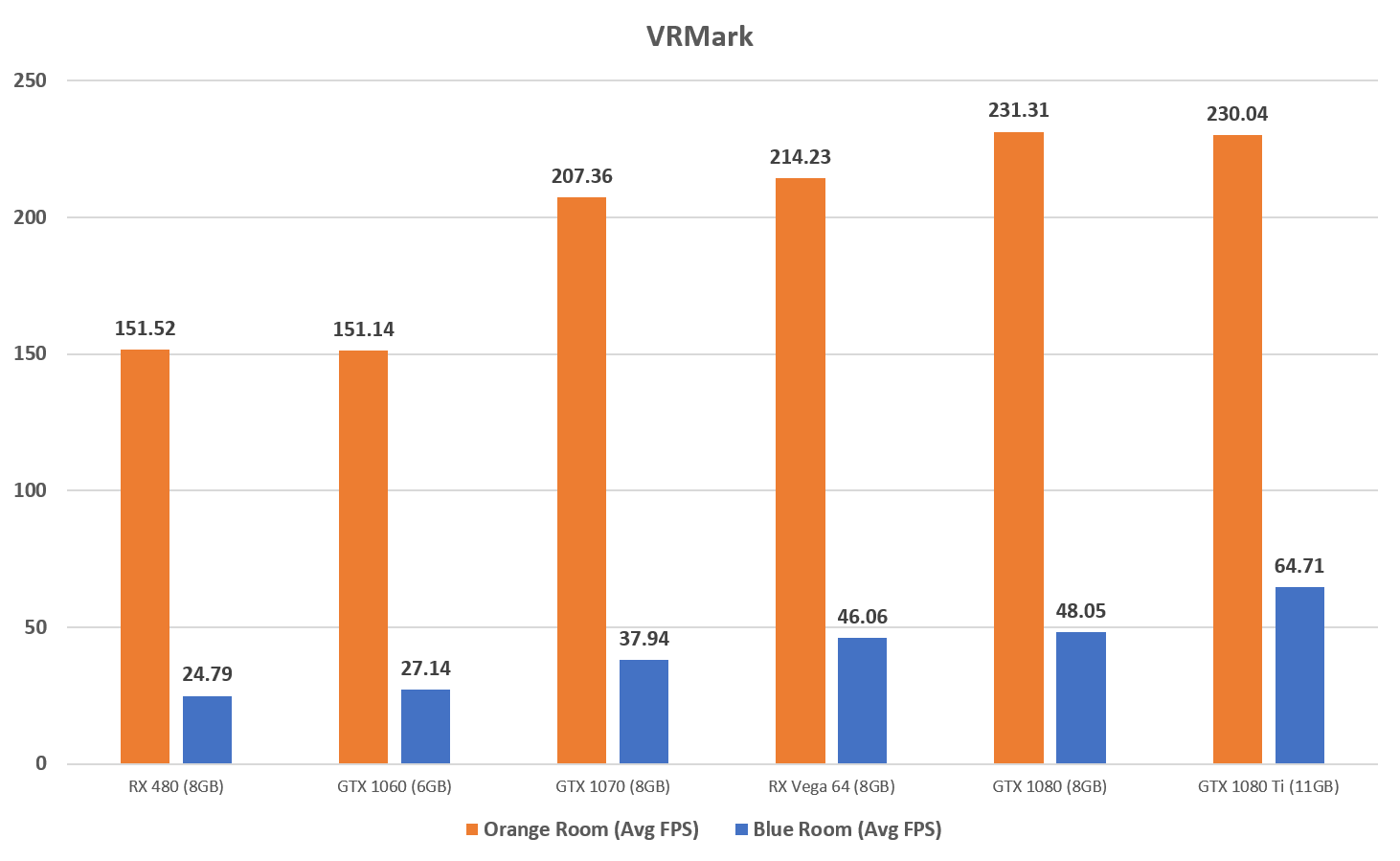 The Orange Room benchmark is a litmus test of your computer’s ability to meet the recommended hardware requirements for the HTC Vive and Oculus Rift – the two most popular VR headset systems today. All the cards performed well, and choosing any of them will guarantee you a good VR experience. You will be forgiven for being surprised at the parity of FPS scores between the GTX 1080 and GTX 1080 Ti cards, but this is due to the performance ceiling of our test system; 230fps or there about is pretty much the limit here. But if we must nitpick, then we must say the RX Vega 64 trailing behind the GTX 1080 was surprising, considering it did outperform the latter in the previous 3DMark benchmark.

The Blue Room is a much more demanding test. It's ideal for benchmarking top-end graphic cards such as the RX Vega 64, GTX 1080 and GTX 1080 Ti. Blue Room benchmark is unique in that it sets the bar for future hardware generations (sort of a way to see how future proof your hardware is), with its massive 5K rendering resolution and spectacular volumetric lighting effects. It’s here that we see the RX Vega 64 not that far behind the GTX 1080.

With that said, if you are looking for a graphics card to pair with your HTC Vive or Oculus Rift, you can’t go wrong with the RX Vega 64 or even any of the other graphics cards tested here.