We have always used an Intel-based test rig for all of our past graphics card reviews, but AMD’s Ryzen 9 5900X have proven in our review to be a fantastic choice for gamers now and so…it will also be our processor of choice for this review.

And here’s how our AMD test rig’s specification looks like:

For comparison’s sake, the obvious choice of card would be NVIDIA’s RTX 3080 Founders Edition. Both cards were tested on the same AMD-based test rig as mentioned above, with the Radeon RX 6800 XT using an unreleased beta driver (Radeon Software Adrenalin 20.45.01.12-11.6 Beta) and the GeForce RTX 3080 FE using ForceWare 457.30.

Here’s a list of the tool and games that I’ve chosen to benchmark both cards. The game genres were purposely varied to give us a sense of how the cards perform across a wide range of titles: shooters, racing, strategy games, etc. 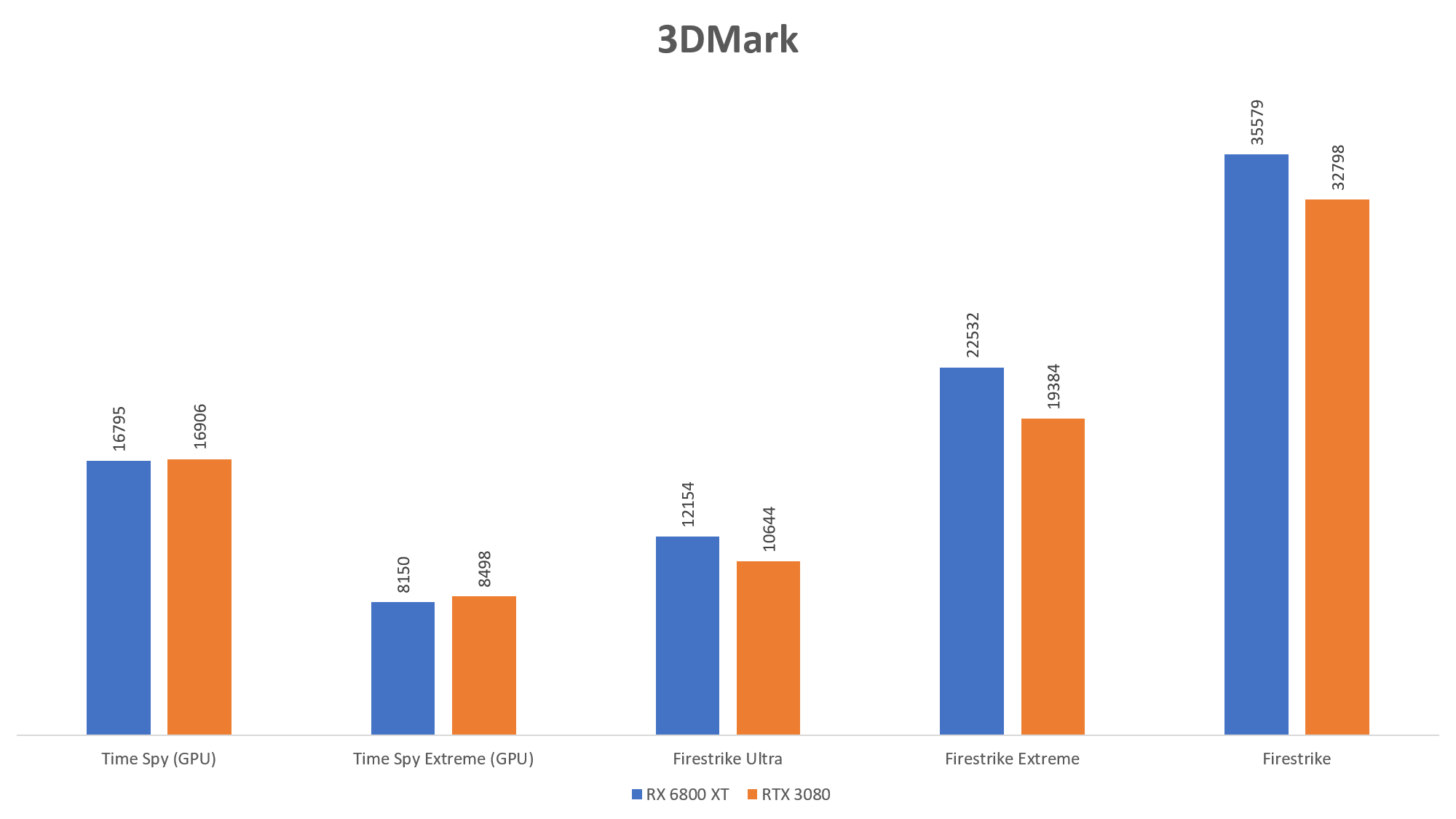 Here we see the RX 6800 XT matching remarkably close to the RTX 3080 in both DirectX 12-based Time Spy tests. In fact, the score difference is so minute I’d say it’s a tie. It’s the results in the Firestrike benchmarks, which tests the card’s DirectX 11 capabilities that are more interesting, as we see the RX 6800 XT outperforming the NVIDIA card convincingly. It looks like the RX 6800 XT just have better optimisations for the older API, despite modern games these days having ditched it in favour of DirectX 12.

This is a performance feat for the RT 6800 XT nonetheless, as AMD finally has a Radeon card that could make an NVIDIA’s flagship GeForce sweat. Let’s see how the card fared with real-world games benchmarks.

I think it’s an overkill to use either flagship gaming cards to run games at 1080p and I reckon when the next-gen gaming cards (and with 1440p QHD being more widely adopted) arrive in the next couple of years, this resolution will likely become obsolete. Nevertheless, here’s how the cards fared in these games with this aged resolution. 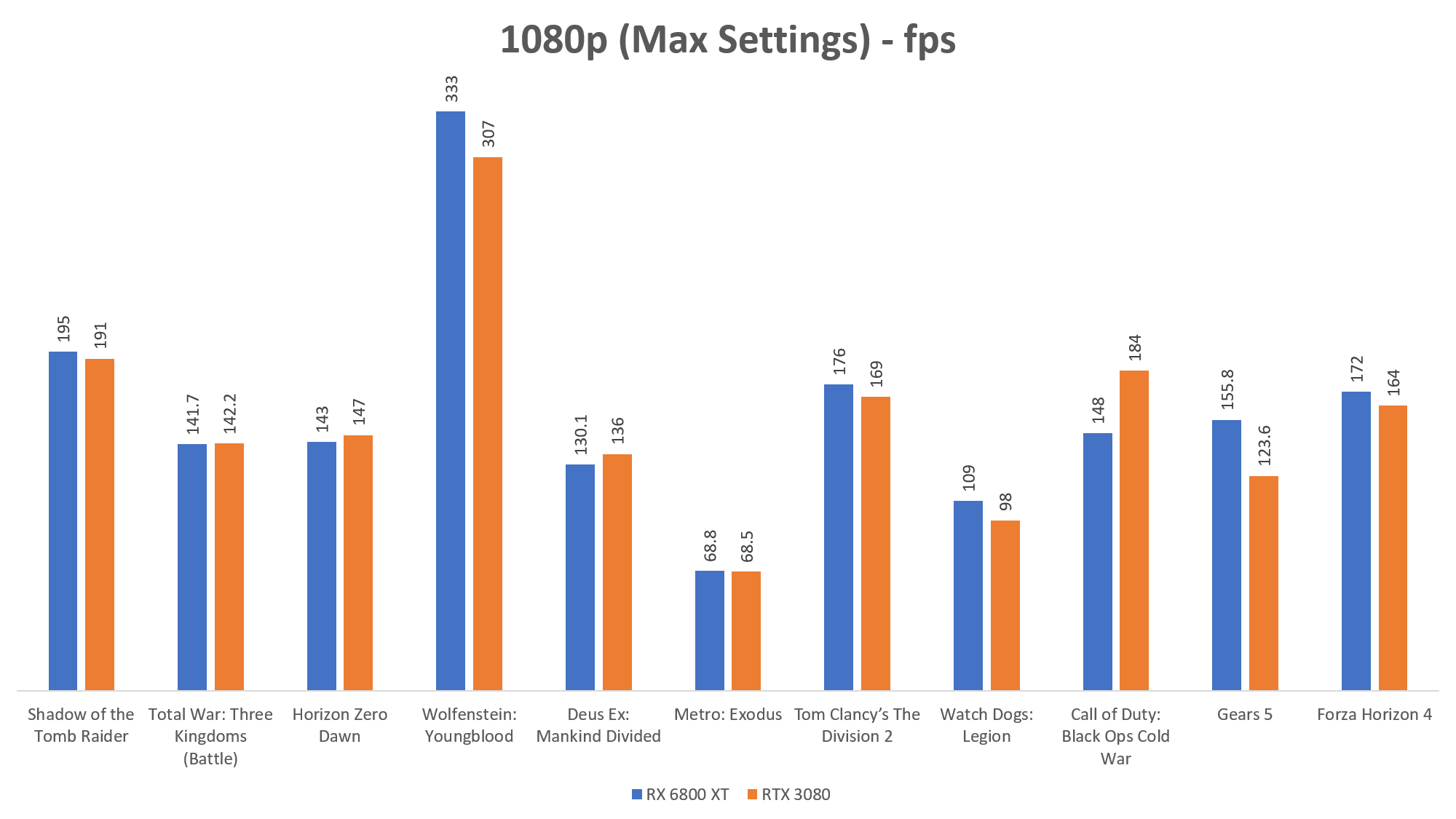 The results do speak for themselves here; the RX 6800 XT does seem evenly matched with the RTX 3080. What’s interesting is the card performing better than the RTX 3080 even on NVIDIA-optimised games like Wolfenstein: Youngblood, Watch Dogs: Legion. It does seem like some drivers optimisation (or lack of) is in play here – note how much better the RTX 3080 performed in another NVIDIA-optimised title, Call of Duty: Black Ops Cold War instead.

As with the 1080p benchmarks, my 1440p tests also pushed graphics settings of each game title to the highest possible. 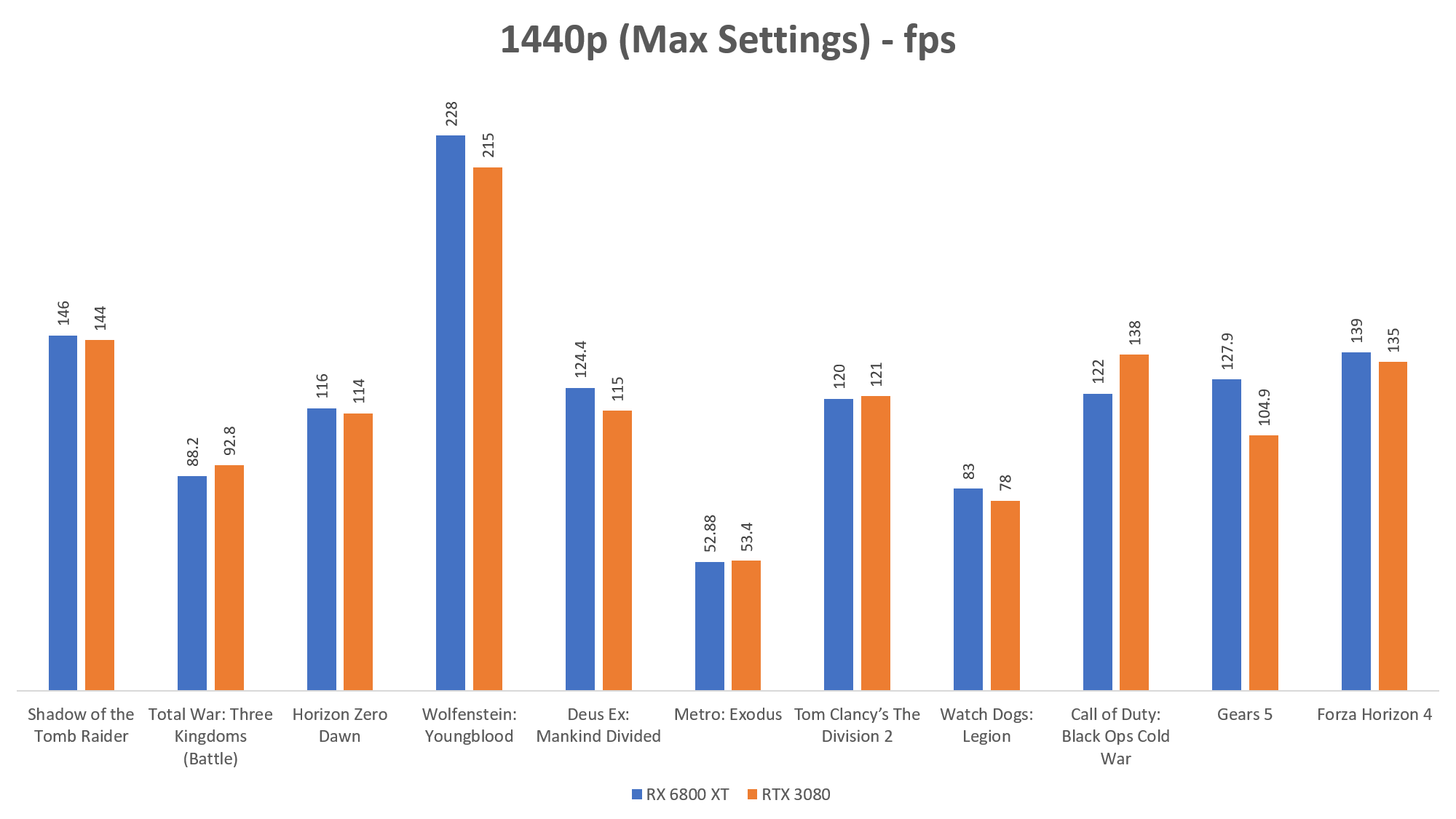 The results pretty much mirrored the results in the 1080p benchmarks although the margins that the Radeon card gained in the earlier tests have been narrowed. In short, just like the RTX 3080, the RX 6800 XT is a great choice for 1440p gaming.