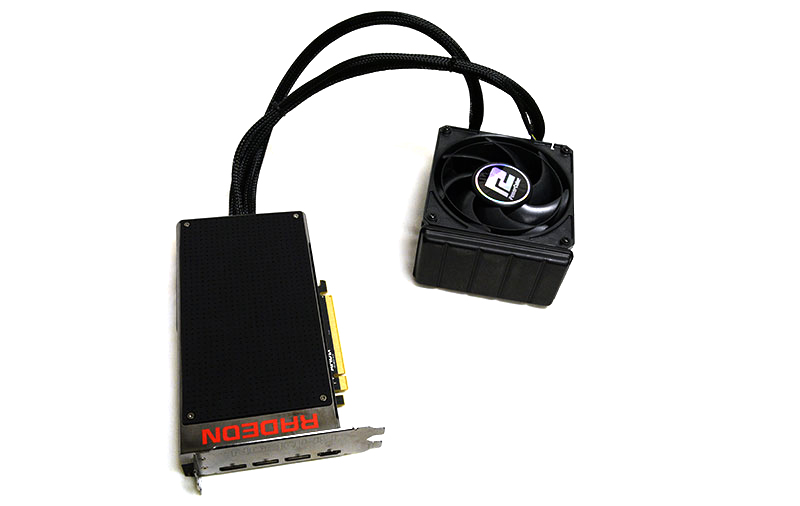 At E3 this year, AMD unveiled the Radeon R9 Fury X as the answer to NVIDIA’s absolute dominance of the enthusiast graphics card market for the past half year. Of course, it’s never good for consumers when only one company is dominating the scene, and enthusiasts and gamers the world over have been hotly anticipating the release of AMD’s new flagship that will – or at least try to – put NVIDIA on the backfoot.

The Radeon R9 Fury X is a one-of-a-kind card, not least because of its use of a close-loop water cooling solution and High Bandwidth Memory (HBM). And as if to further highlight the strength of its opening gambit of 2015, AMD is drawing on its, or more specifically ATI’s, past successes for a new naming scheme for its new flagship.

Back in 1995, ATI named its first 3D accelerators Rage. This eventually spawned more cards bearing the same moniker, including the Rage Pro, Rage 128 Pro, and Rage Fury. That’s right, Fury. With the Radeon R9 Fury X, AMD is reviving an old name and also drawing on the same semantics that inspired the Rage name. The Rage cards were ATI’s first to feature 3D acceleration capabilities, and AMD may be hoping that the Fury X will be the first to mark the company’s emergence from the difficulties that have weighed it down in recent years.

AMD has reserved its new Fiji GPU architecture for the R9 Fury X. While last year’s single-GPU flagship was the AMD Radeon R9 290X, this year’s R9 390X is merely a rebrand of the Hawaii XT GPU (now called Grenada XT) on the R9 290X.

It has also managed to cram 8.9 billion transistors onto Fiji’s 596mm² GPU die. In comparison, NVIDIA’s GM200 GPU on the GeForce GTX Titan X and 980 Ti is 601mm² and packs 8 billion transistors, which means Fiji arguably sports a higher transistor density than GM200. Of course, both GPUs are entirely different chips and utilize different architectures, so this isn’t really a good gauge of performance.

Here’s a look at Fiji’s block diagram before we venture into how Fiji differs from Hawaii: 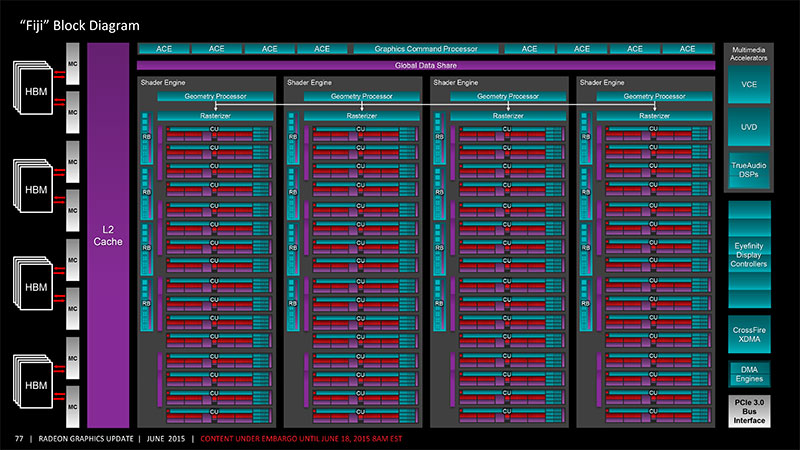 Like Hawaii, Fiji is still manufactured on a 28nm process node and features four Shader Engines. However, it has bumped up the number of Compute Units (CU) in each Shader Engine from 11 to 16. Each CU has 64 shaders, so that brings the total number of shaders across the four Shader Engines to 4,096, up from 2,816 in Hawaii - an increase of 45%. There are also four texture filter units per CU as on Hawaii, but because there are now 64 CUs (up from Hawaii’s 44), Fiji can boast a total of 256 texture filter units, up from Hawaii's 176 - again, a substantial increase of 45%.

Fiji also retains the improvements AMD made to its third-generation Graphics Core Next (GCN) architecture in the Tonga GPU we saw on the Radeon R9 285 (rebranded as the Radeon R9 380). This mainly includes improvements to tessellation and geometry performance.

The Radeon R9 Fury X’s Fiji GPU has a core clock of 1050MHz and memory clock of 500MHz (1Gbps HBM). If this seems a little low to you, you’re right. But this is all a result of AMD’s use of HBM, which we’ll cover in the next section.

Furthermore, the low memory clock speed of 500MHz is compensated for by the super-wide 4,096-bit memory bus, resulting in a total memory bandwidth of 512GB/s. The Fury X is designed expressly to excel at 4K gaming, and this abundance of memory bandwidth is a step in this direction. 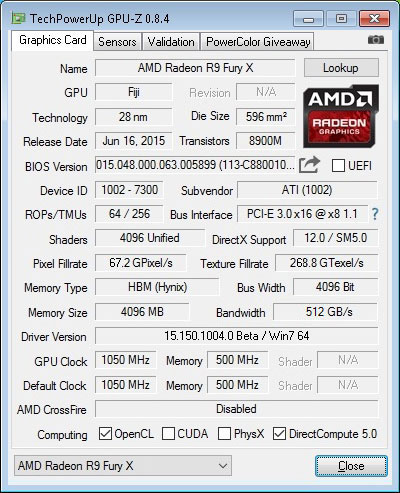 The Radeon R9 Fury X will also support DirectX 12 and new features like Frame Rate Target Control (FRTC), Virtual Super Resolution (VSR), and Asynchronous Shaders. We've already covered these features in greater depth in our review of the Radeon R7 370 and R9 380, so we won't be rehashing them here.

The Fiji GPU die is also now surrounded by four stacks of HBM memory amounting to 4GB. The Fury X is the first consumer GPU to feature HBM, which AMD says will help overcome the limitations of GDDR5 memory.

We’ve covered the key aspects of HBM in a previous article already, but here’s a quick recap. As 4K gaming and other bandwidth-hungry applications begin to impose themselves on the mainstream, GDDR5 is fast exhausting its ability to meet bandwidth demands as the required increase in power consumption is becoming unfeasible.

Another crucial benefit that HBM provides is its close proximity to the GPU die itself. Both the HBM memory stacks and the GPU die sit atop a silicon-based interposer, to which they are connected by new type of interconnect called through-silicon vias (TSV). The interposer is essentially a silicon substrate for the GPU and memory dies, and through which microscopic wires connecting both memory and GPU run. The improved proximity simplifies communication and clocking and also enables the extra-wide memory bus width. 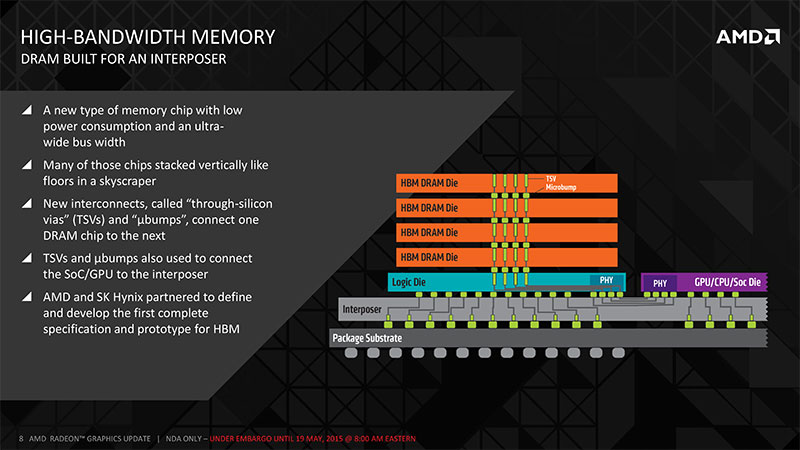 Furthermore, HBM enables significant space savings over GDDR5 because of its stacked architecture, which is how AMD has managed to manufacture a card with such a compact PCB. 1GB of GDDR5 memory would measure around 24 x 28mm, but a 1GB HBM stack would have just an area of 5 x 7mm, which translates into almost a 94% reduction.

But regardless of the much-vaunted bandwidth and power efficiency improvements enabled by HBM, 4GB may still seem like a paltry amount, especially in an era where high-end GDDR5-based GPUs can have anywhere from 6GB to 12GB of memory. In fact, AMD's own Radeon R9 390X and 390 GPUs are equipped with 8GB of GDDR5 memory.

Nevertheless, AMD apparently does not see its memory capacity as a potential performance limitation. Larger GDDR5 memory capacities have been an inevitable byproduct of the need to increase memory bandwidth by increasing memory bus width, which in turn required more GDDR5 chips. AMD says that this has actually resulted in more capacity than is actually needed, and unused frame buffer capacities effectively serve no functional purpose whatsoever. Now, because of the impressive 512GB/s of bandwidth made available by HBM, AMD no longer has the need to increase memory capacity for the sake of getting more bandwidth. Instead, it all comes down to efficiency and how effectively drivers and programs are at managing the 4GB frame buffer.

This confidence aside, AMD has still been careful to say that the design of HBM is in no way limited to 4GB only – that is, there is no cap on how many HBM stacks we can have, or how many DRAM chips can be stacked on top of one another. AMD may have decided to go with four stacks of 1GB HBM (four 256MB dies) in its first debut of the technology, but we could very well expect future generations of cards to sport larger HBM capacities, either by utilizing larger DRAM dies per stack or increasing the number of stacks. After all, the numbers game is never at a standstill. 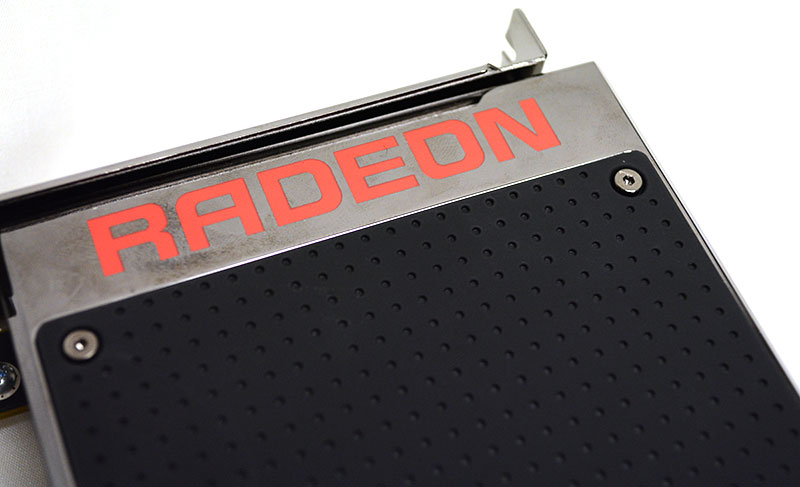 With a launch price of US$649, the Radeon R9 Fury X costs the same as its main competitor, the NVIDIA GeForce GTX 980 Ti. The latter card was launched at the start of June – somewhat pre-emptively – ahead of the Fury X, and ended up delivering performance close to that of the GeForce GTX Titan X.

If we put aside performance numbers for a second, the Radeon R9 Fury X has a clear advantage over the reference GeForce GTX 980 Ti. AMD has built a seriously premium-looking card, complete with a closed-loop liquid cooling solution.

Let’s face it. This is one beautiful card, even without going into the details of the materials and finish. The entire card is comprised of multiple pieces of diecast aluminum, where the black aluminum exoskeleton is complemented by a nickel-plated chrome finish bearing the Radeon logo. The design is topped off by soft-touch sides that feel better made than most metal-and-plastic cooling shrouds.

The card’s bottom surface features an understated dotted grid pattern that we quite like. In fact, its bottom faceplate might just be the most interesting part of the card because it can features four hex screws that can be removed to swap out the faceplate. AMD is letting you 3D print a replacement plate with your own custom design, and you can download the 3D printing model here. Enthusiast PC builders are big on customization, and we think that it’s great that AMD is making it possible for users to personalize their cards. 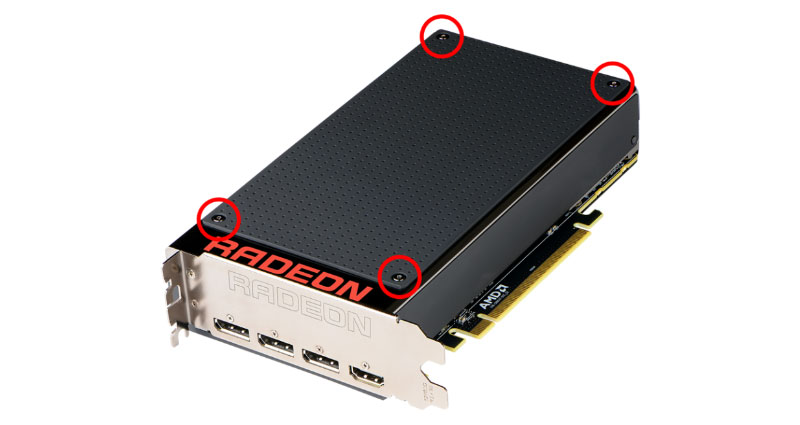 AMD has put a lot of effort into designing a high-quality product, and this is evident from the use of a 120mm Nidec Servo Gentle Typhoon fan on the radiator. From our tests, the fan was capable ramping up to a maximum speed of 3,000rpm. Gentle Typhoons have a reputation for being excellent radiator fans, and we’re glad that AMD didn’t just slap on a run-of-the-mill chassis fan instead. 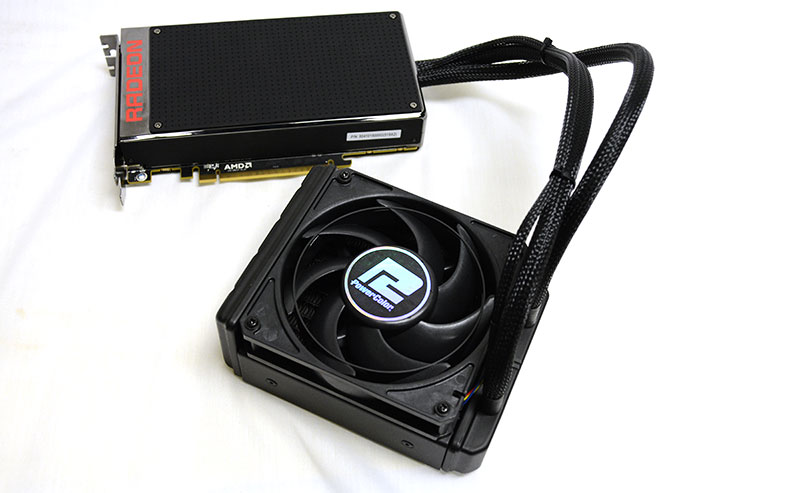 As we’ll see later, the water-cooling loop does a great job at keeping the card cool. We also didn’t notice any high-pitched pump whine that some reviewers and users reported, so it may be that we’ve received a unit from one of the later batches.

Display connectors are located round the back of the card, and we’re slightly miffed that AMD has chosen not to include any DVI ports this time. Instead, the card has just one HDMI port and three DisplayPort outputs, so make sure you have the appropriate video cables for your setup. 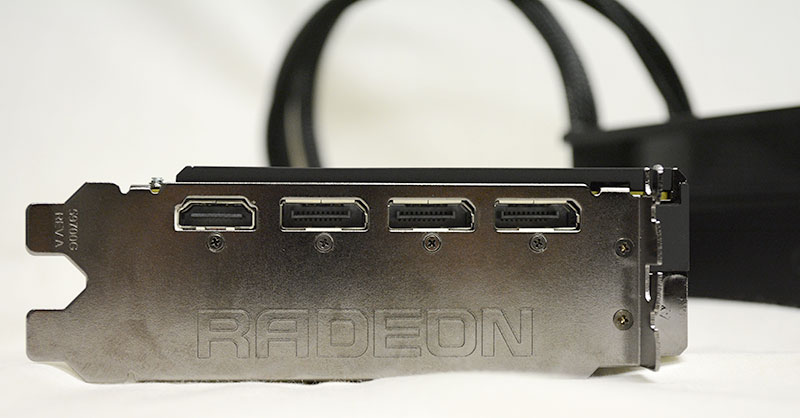 Power is delivered via two 8-pin PCIe connectors. The Radeon R9 Fury X has a Thermal Design Power (TDP) of 275 watts, slightly higher than the 250 watts of the NVIDIA GeForce GTX 980 Ti and Titan X.

The Fury X boasts a row (8+1) of GPU Tach LEDs above the power connectors. They serve as a gauge of the card’s activity – only one light is lit when the GPU is idle, but the entire row will light up during a heavy gaming session. There is a single green LED that will glow when the GPU is in ZeroCore Power operation. 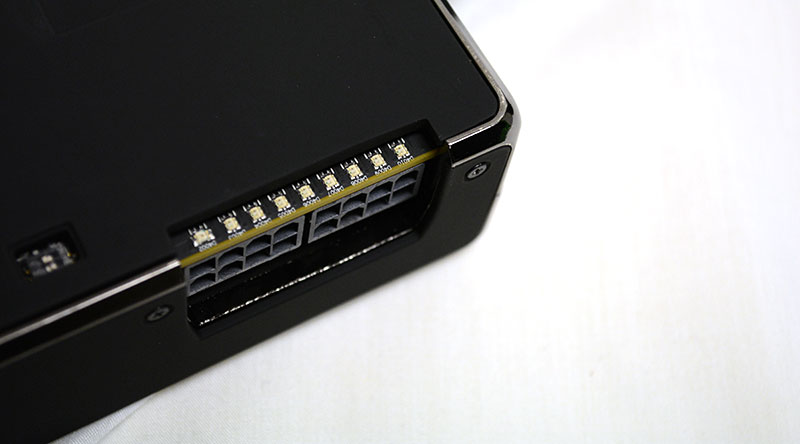 The LEDs can also be configured as either red, or blue, depending on the position of the DIP switches located close by.

Here’s a table showing the positions of the DIP switches and what they do: