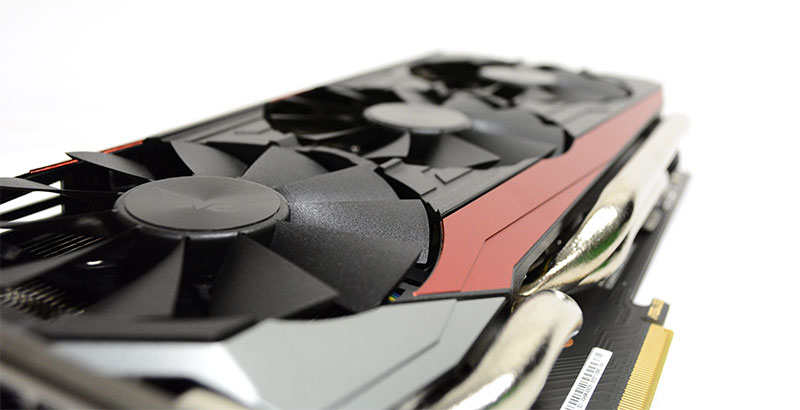 AMD’s 2015 line-up looks to be all about diversity and giving consumers more choice. The cards that go by the 300 series moniker are rebrands of various 200 series cards from 2013, and AMD has instead coined a new flagship with its new Radeon R9 Fury cards. By carving out a new niche for its top-end Fiji cards, AMD has freed up its entire 300 series of cards to cater to everyone from budget-conscious gamers to more performance-oriented enthusiasts.

AMD is even due to release the Radeon R9 Nano – an ultra-compact six-inch card – and a dual-Fiji GPU later this year, so fans of the red camp will indeed be quite spoilt for choice.

However, AMD isn’t content to release just a liquid-cooled version of its main Fiji GPU. It also announced the air-cooled Radeon R9 Fury, with a pared-down version of AMD’s new Fiji GPU but the same 4GB of High Bandwidth Memory (HBM) and an eye-popping 4096-bit memory bus width.

At US$549, the Fury is also a fair bit cheaper than the US$649 Fury X, so consumers who don’t see a need for the bells-and-whistles of the Fury X will still be able to enjoy AMD’s new GPU architecture at a more affordable price. And while the Fury X is currently only available in its reference design from various add-in card partners, custom versions of the Fury – complete with proprietary air-cooling solutions from manufacturers – will be available. In fact, we’ve heard that AMD hasn’t even bothered to release a complete reference design of the Fury.

It’s easier to think of the card as a more affordable entry point into Fiji, where its main selling point would be its use of HBM and its performance at quad HD and 4K resolutions.

Of particular interest will be whether its performance justifies the price premium over the GeForce GTX 980, and whether HBM does indeed provide the necessary increase in memory bandwidth to boost high-resolution gaming performance when compared to other cheaper GDDR5 cards.

A smaller slice of Fiji

A quick glance at the specifications sheet indicates that the Fury is a somewhat slower version of the Fury X. In a way, it is to the Fury X what the GeForce GTX 980 Ti was to the Titan X. It still features the same Fiji GPU, but with certain elements disabled.

Here’s a look at the block diagram of the Fiji GPU before we go into further detail on what’s changed on the Fury: 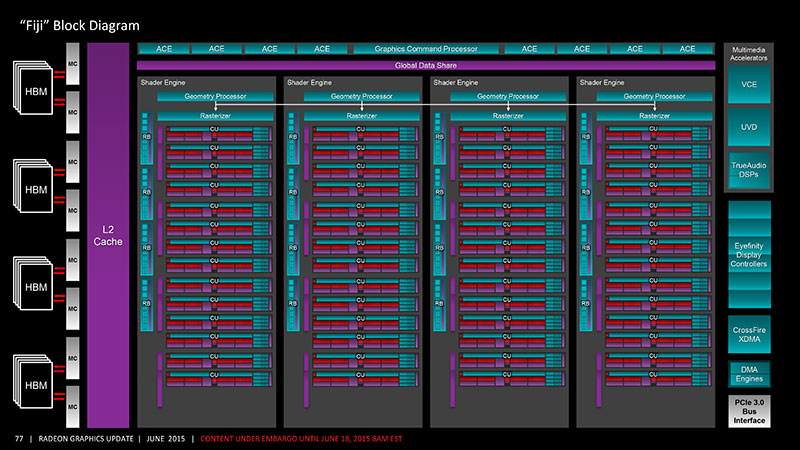 In addition, because of the eight disabled CUs (each CU has four texture filter units), the Fiji GPU on the Fury will feature 224 texture filter units instead of the full 256 on the Fury X, and core clock speed has been taken down a notch to 1000MHz. From a manufacturing standpoint, this could also allow AMD to salvage GPU chips that don’t make the cut for the Fury X and result in an overall more efficient production process with less wastage.

Other than that, the Fury’s Fiji GPU retains the same 64 ROPs on the Fury X and 4GB of HBM memory stacks. Here’s a quick GPU-Z snapshot to provide an overview of the card’s specifications: 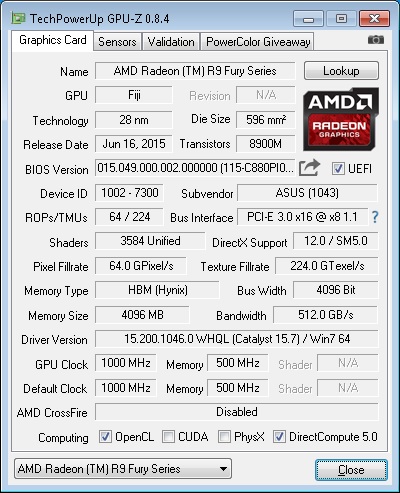 For a more in-depth look at HBM, please refer to our initial coverage article and our review of the Fury X.

AMD’s first-generation design has placed four 1GB stacks of memory around the GPU die, all of which are attached to a silicon-based interposer. With a memory clock speed of 500MHz and a bandwidth of over 100GB/s per stack, the Fury has a total memory bandwidth of 512GB/s available to it, the same as the Fury X.

This means that it should perform well against the Fury X and other cards with less bandwidth where memory bandwidth is a bottleneck – for instance when resolutions and anti-aliasing are turned up – but the 4GB might turn out to be limiting in situations where an especially large-capacity memory buffer is needed.

As we’ve already noticed in our reviews of the Fury X and Radeon R9 390X and 390, the larger available memory bandwidth has often been the cards’ saving grace against NVIDIA’s own offerings. 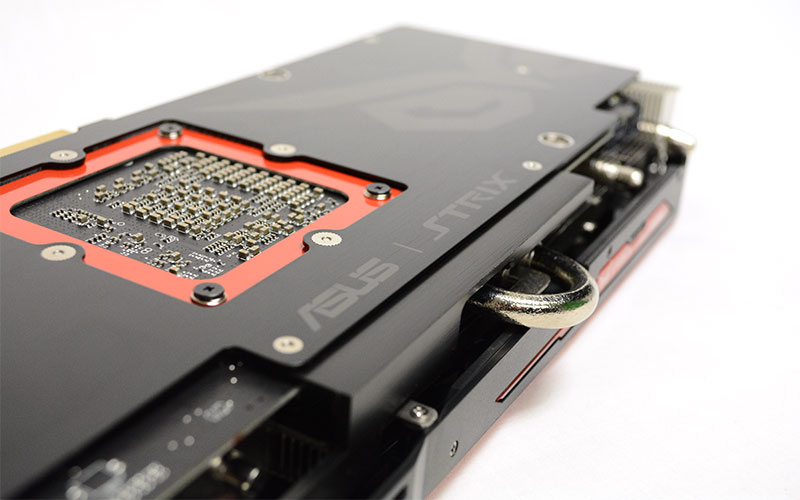 AMD hasn’t made any reference cards available for review, so we’ll be using the ASUS Strix Radeon R9 Fury to get a better look at the card and what it’s capable of.

For starters, the card uses ASUS’ DirectCU III cooler with three fans. Like other cards from ASUS under the Strix brand, this particular Fury uses a predominantly black cooling shroud with daring dashes of red down its length.

The ASUS Strix Radeon R9 Fury ships with out-of-the-box clock speeds of a 1000MHz core clock and effective memory clock, the same as the reference specifications. The core clock increases to 1020MHz in OC mode.

The Radeon R9 Fury is rated for a Thermal Design Power (TDP) of 275 watts, the same as the Fury X. Of course, air-cooling won’t quite measure up to the stellar liquid-cooling loop on the latter card, but ASUS is certainly trying to deliver some decent cooling with its thick, dual 10mm heatpipes that are in direct contact with the GPU.

There’s also the Wing-blade fan design that we’ve seen on a number of ASUS cards for a while now. 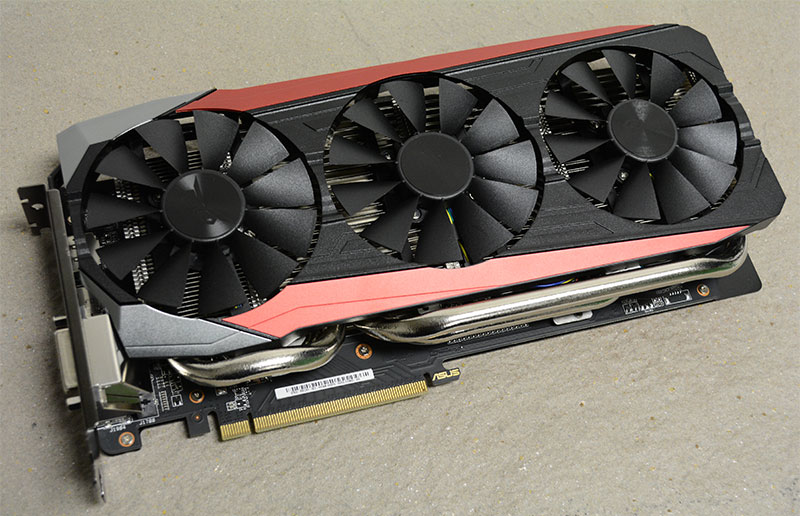 One particular feature we noticed is the use of a full-length metal backplate on the card. ASUS has also added on a dedicated GPU fortifying brace (red in color) to provide extra support to the GPU and prevent flexing to that particular area of the PCB. 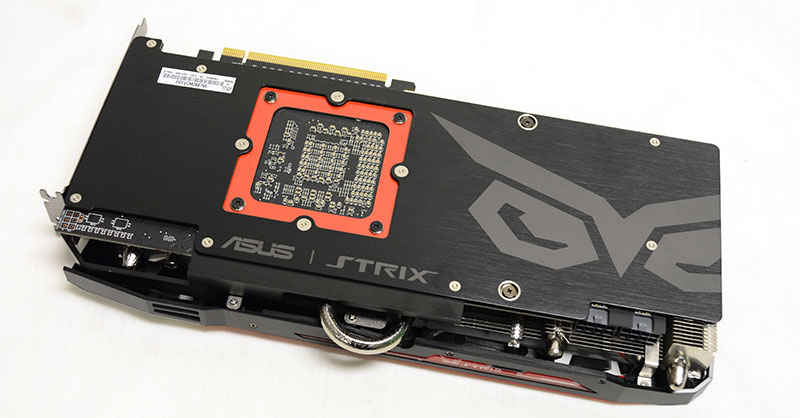 This is unlike what we saw on custom versions of the Radeon R9 Fury from other manufacturers like Sapphire and PowerColor, which sported a shorter backplate that allowed the cooler to extend beyond both the PCB and backplate. Both manufacturers have probably hewed closer to the shorter reference PCB, but it looks like ASUS has gone with a completely custom PCB that spans the entire length of the backplate and heatsink fins.

Furthermore, part of this custom design includes the use of high-quality chokes and capacitors, which ASUS says have an increased lifespan and will help to minimize any potential buzzing noise

Unlike the Fury X, the Fury has a more standard complement of display connectors, comprising a much-missed DVI-D port, one HDMI connector, and three DisplayPort outputs.

Finally, the pulsating LED-illuminated Strix logo at the side adds a little vibrance to your setup.