You may have heard rumblings about Fusion APUs from AMD in the past few months, with cryptic codenames like Brazos and Llanos. Brazos was the first Fusion APU or Accelerated Processing Unit from AMD to ship this year and it was mostly targeted at the entry level mobile segment. Llano meanwhile is the mainstream offering and the mobile variants appeared earlier this month, which we covered in a preview here. Our conclusion then was that Llano is a serious contender to mainstream Sandy Bridge mobile processors with its competitive graphics performance and battery life.

Today, the desktop Llano APUs are unveiled. Known similarly as AMD A-Series APU, these new desktop models have a similar naming scheme (analogous to Intel's Core i3, i5 and i7) as the mobile variants, though currently there are just two series at launch, A6 and A8 and both feature quad-core processors.

So what exactly is an AMD A-Series APU? In AMD's own words, it's like taking a Northbridge chip, with its memory controller functionality, combining it with an x86 CPU based on a tweaked version of AMD's K10 architecture (on the Phenom II) and then adding a discrete DirectX 11 graphics processor with up to 400 Radeon cores. Shrink it down to a die size of 228mm2 and built using AMD's 32nm HKMG process.

The four 'Stars' CPU cores are based on the Phenom II architecture, but updated with improvements of up to 6% increase in instructions processed per clock (IPC). Each core also gets 1MB of L2 cache, which compares favorably with the 512KB per core on the Athlon II X4. The presence of the graphics cores means that there's no space left for a L3 cache and as a result, we believe that AMD's Phenom II processors will be faster than these new APUs in terms of CPU horsepower.

One major change for the A-Series APU is the addition of AMD Turbo Core. This technology, which we covered here, is similar in concept to Intel's Turbo Boost - when less processor cores are utilized, it allows the remaining, running cores to scale up in terms of clock speeds. Turbo Core has been available for Phenom II processors before, but AMD has now brought this feature to certain A-Series APU and it should work similarly.

Although the integrated, dual-channel DDR3 memory controller is not surprising in today's modern CPU architecture, the controller on the AMD A-Series APU actually supports up to DDR3 1866MHz, which is the highest we have seen so far on an available CPU. As you'll see later, the memory frequency will have a direct impact on the APU's graphics performance and users will be glad that 1866MHz is the upper limit. 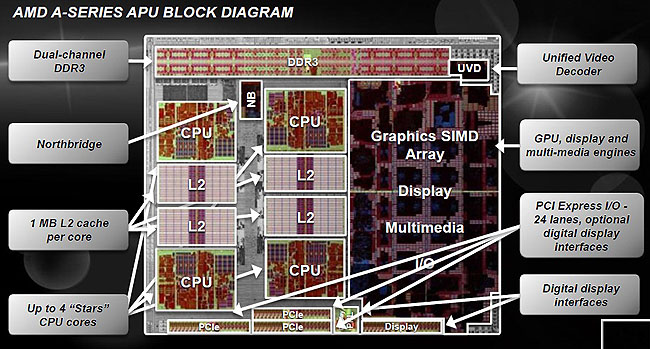 AMD will be launching two A-Series APU for the desktop today. The A8-3850, which we received for testing and review, is the top model with a maximum clock speed of 2.9GHz. It will not have AMD Turbo Core, but makes up for it with the highest clock speed and the best integrated graphics core, the Radeon HD 6550D. It's priced at US$135. The other model is the 2.6GHz A6-3650, which has the slower Radeon HD 6530D graphics and it too, has no Turbo Core. It's priced at US$115.

AMD has also revealed other models in its presentation. All the models have a similar amount of L2 cache and will use the new socket FM1. You can get the key specs for the rest of the bunch below:

As the block diagram showed, the graphics array in the APU takes up almost 50% of the die, which proves that AMD is taking the graphics aspect very seriously. Included within is AMD's latest Unified Video Decoder (UVD 3) found on its Radeon HD graphics cards, which will provide hardware acceleration for HD content and will result in lower CPU utilization. As for the integrated graphics core, there are two types available in the A-Series desktop APUs launched today, the Radeon HD 6550D and the 6530D. They differ primarily in the number of Radeon cores and the clock speeds: 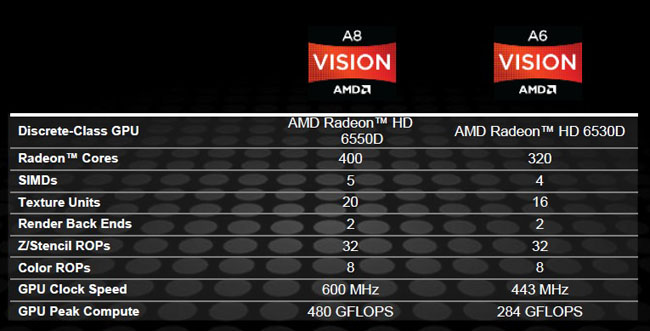 And finally, the new AMD APU can only be identified properly with the latest version 1.58 of CPU-Z. Apparently this version has just been released and when we first started testing our review A8-3850 APU, we had to make do with the previous version that barely gave any useful information. 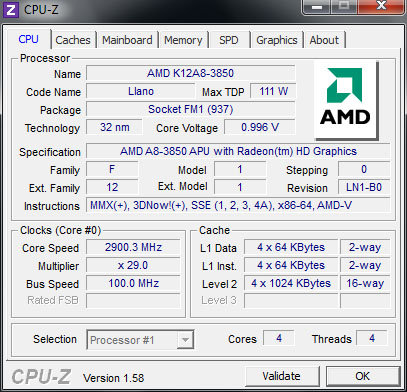 No processor runs by itself in isolation; there's always a supporting platform and for the A-Series desktop APU, that is the Lynx platform (the mobile Llano equivalent is Sabine). More on this on the following page.

Write a Review
Compare This | Specifications
Hits new high in integrated graphics performance
Mainstream pricing
Mediocre CPU performance
Dual Graphics feature is disappointing
Our articles may contain affiliate links. If you buy through these links, we may earn a small commission.
Sponsored Links