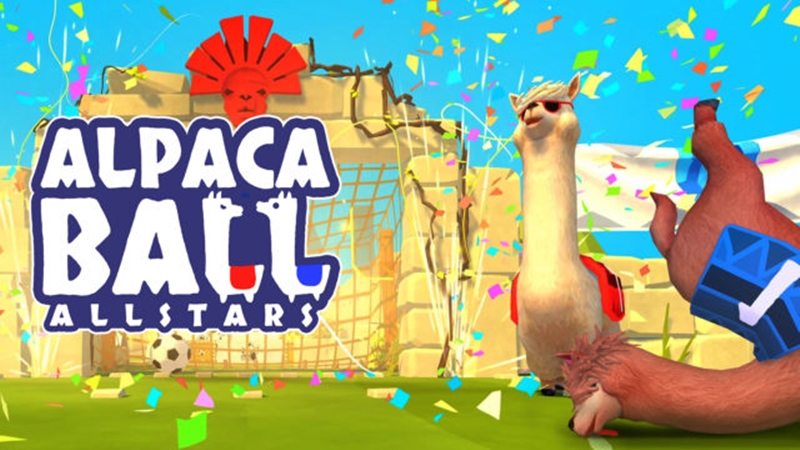 Frankly, I don't even know where to start with this one - how are you supposed to write about a game where you control soccer-playing alpacas? Much less ones that can row boats in the overworld?

I can't stop laughing, and if this review needs to get anything across, it's that Alpaca Ball: Allstars is as comedic as it is addictive. Developed by the wisecrack minds over at Salt Castle Studio, I can honestly say that playing this game is like trying to play digital foosball using Goat Simulator-style physics after everyone has had a little too much to drink. 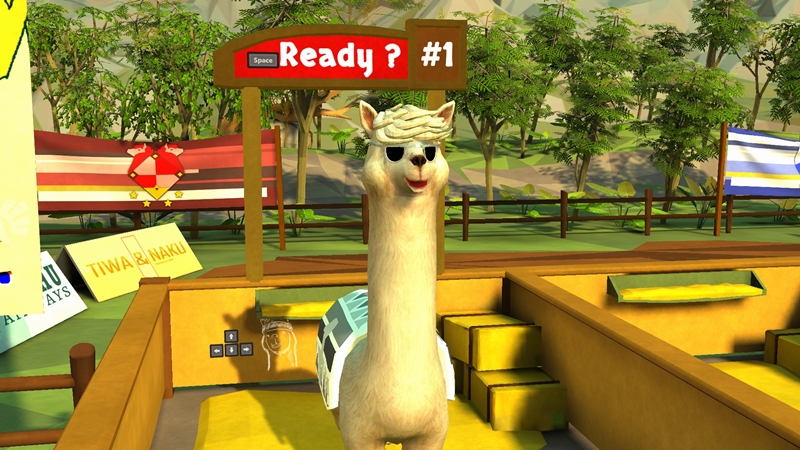 First and foremost, ABA is fundamentally a party game, which means nobody should be taking this too seriously. Actually, it's not even a choice - how are you supposed to keep a straight face while controlling a shades-wearing alpaca in a soccer jersey?

Now, I haven't the faintest idea why the developers decided to go with alpacas, but that's not really important. Aesthetically, the game makes its stand clear right from the get-go. It's simple, daft and completely SFW (suitable for work), and it even features a jolly South American vibe to wrap it all up. The arenas and the overworld are done up in an adorably cartoonish fashion, and it's really hard not to chuckle at the thought of an alpaca rowing a boat. 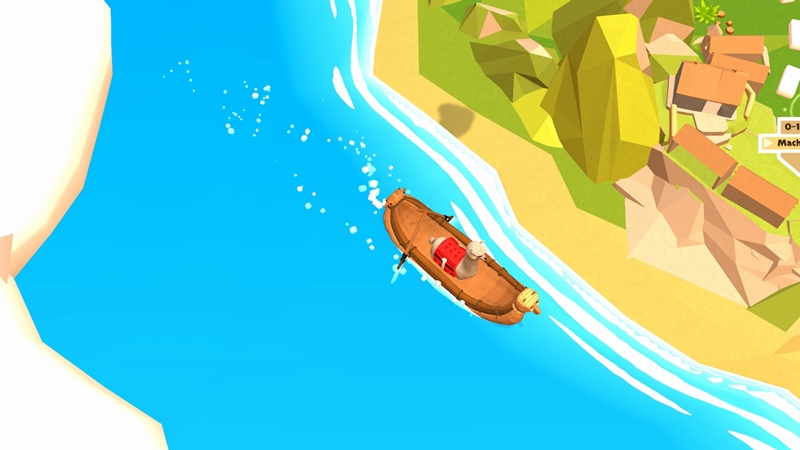 When it comes to the music, it's as South American as you can get too. Lively jingles and bongo beats play in the background as you and the other alpacas vie for supremacy in the Alpacaball court, with fanfare and confetti spraying about whenever a goal is scored. It all feels entertainingly (and surprisingly) authentic, and when coupled with the various Peruvian-themed stadiums, the game actually does a pretty good job where the aesthetics are concerned.

Time to kick some balls around 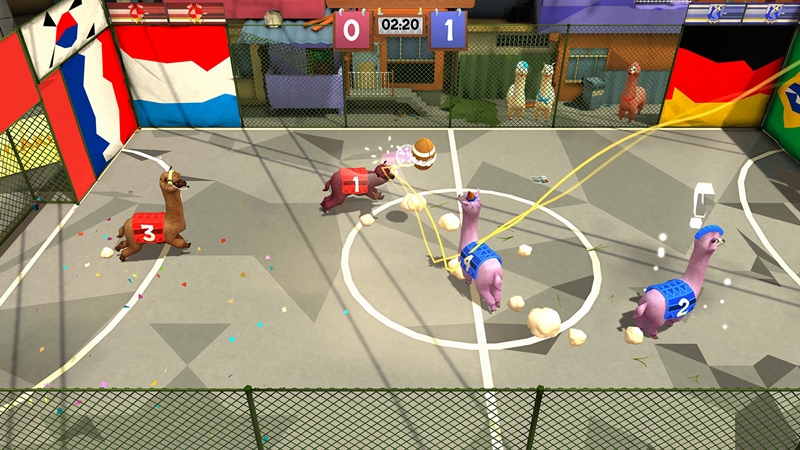 Okay, that title sounded a LOT better in my head.

Anyway, let's talk about what you and the other alpacas actually do while on the court. Basically, using a combination of your necks, bulk, backside and some sort of janky alpaca flip kick, you try to get the ball into your opponent's goal before the timer runs out. Yes, it's an extremely simple formula, but hey, considering the entrire premise of the game - what do you expect?

In general, controlling the alpaca kind of feels like it's permanently wearing ice skates, which is to say that you can't make instant 90-degree or 180-degree turns here. Instead, the game takes your character's current inertia into account, which, for those who are about to Google it, is the fancy physics term for why we have seat belts. So with that factored in, what you get is a bunch of four-legged jersey-wearing animals sliding all over the court chasing after a ball on screen, while the same number of (human) players mash buttons and arrow keys (or thumbsticks) like maniacs in real life.

In terms of modes, you have a bunch to choose from, although most of them are ones that you'd expect to see from this sort of game. First, there's the customary Career mode, where you attempt to snag the Alpacaball crown with the help of your dedicated coach Paco, a set of amusingly-named alpaca-pals (try saying this five times fast!) and your mum. Yes, you have an alpaca mum. However, apart from the light-hearted humour and typical career-style story progression, there isn't much else to do in this section considering there aren't any "star rankings" or whatnot for achieving certain conditions. 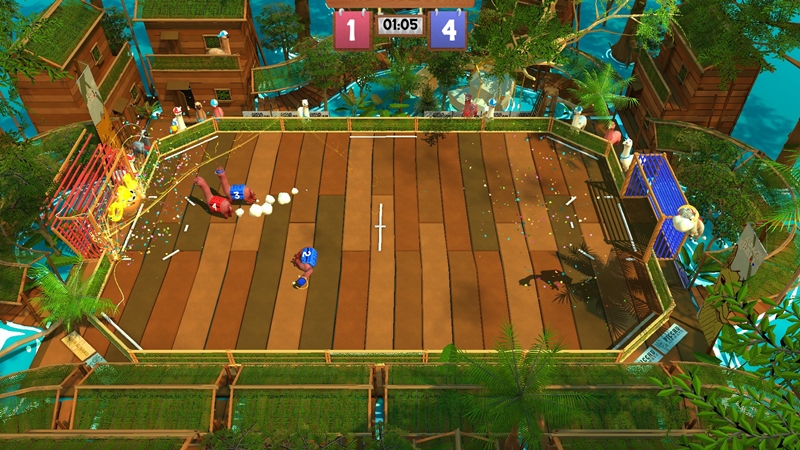 Following that, you've got Multiplayer too, where you can have as many as 8 players scuttling about the court trying to nudge the ball into the goal. There are a whole bunch of options available at your disposal if you're setting up a custom game, and you can even spice things up by enabling powerups.

Yet, for all of its hilarity and fun-for-all-ages approach to doing things, ABA can't really escape its characterisation as a party game. It's not something you'll really want to pour lots of time and effort into like Breath of the Wild or Dark Souls, and in that sense, it's kind of in the same category as Mediatonic's Fall Guys. Essentially, you take it out to have some fun every so often during lazy afternoons or when your family and friends come over, but otherwise it's just a "time-filler" title.

It's never really going to get old 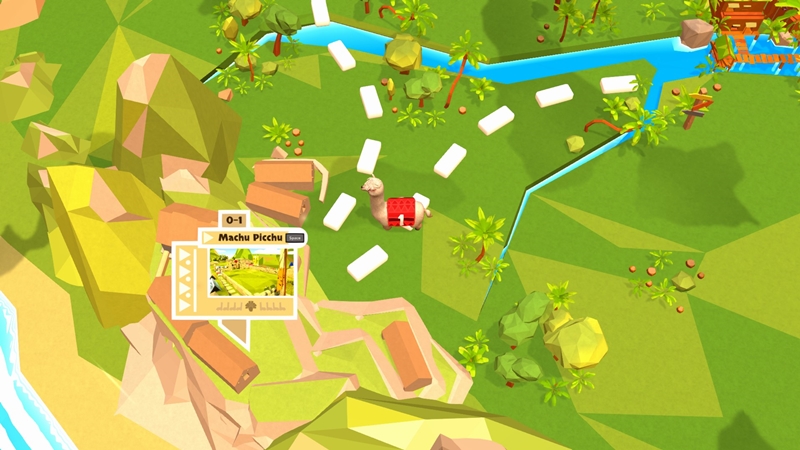 But all things considered, Alpaca Ball: Allstars is still enormous fun when you do decide to pick it up, and it's actually one of the more amusing "cartoon-style" games I've come across this year, the others being Battletoads and the wildly popular Among Us ("sus" memes and all). It's got pretty good graphics and audio for the most part, and as we said earlier, the gameplay is more evergreen than a Christmas tree. Suffice to say that it'll deliver the same amount of hilarity each time you boot it up, even if it is permanently pigeonholed into the party game section of your game cupboard.

Write a Review
Compare This | Specifications
Aesthetic formula gels together quite nicely
Controls are reasonably simple to learn, but difficult to master
Gameplay is eternally evergreen
Alpacas. Because reasons.
Career mode features low replayability after the first clear
It's not a game you see people investing lots of time into
I'm calling bulls**t on that last-second goal
Our articles may contain affiliate links. If you buy through these links, we may earn a small commission.
Sponsored Links