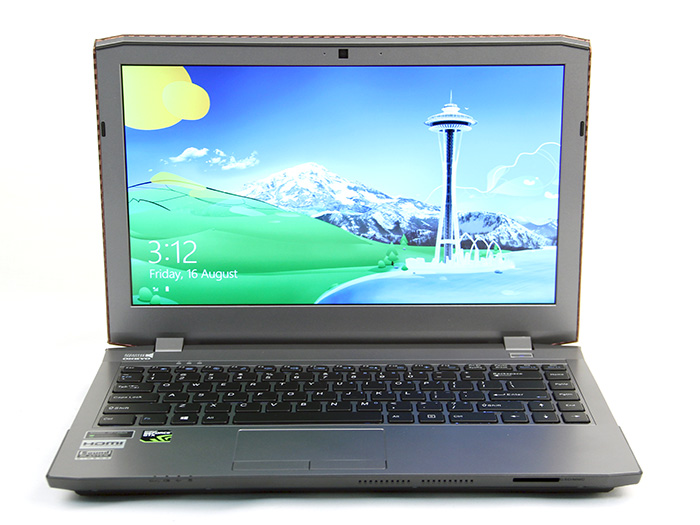 Aftershock is a Singapore-based custom notebooks specialist. Currently, they offer seven distinct models in a variety of sizes - ranging from the compact 13-inch XG13 we have for review here, to the simply massive 17-inch Titan. However, what really makes Aftershock stand out from the competition is that their notebooks are highly customizable.

The XG13 is Aftershock’s latest addition to their stable and it is their take on the new breed of ultra-slim and ultra-portable gaming notebooks. To begin and to be frank, the XG13 loses out in the portability stakes when compared to its two recently reviewed rivals - the MSI GE40 2OC Dragon Eyes and the Razer Blade. With a thickness of 32mm, it is marginally thicker than the MSI GE40 and nearly twice as thick as the Razer Blade. Its weight of 2kg also makes it slightly heavier than its rivals.

Fortunately, it makes up for its bulkier dimensions by being the only notebook in its class to offer a Full-HD (1080p) IPS display panel and by being highly customizable. This is a boon to users with specific requirements, and it also means that it is possible to spec the XG13 with a faster processor, more memory and greater flexibility when it comes to storage. 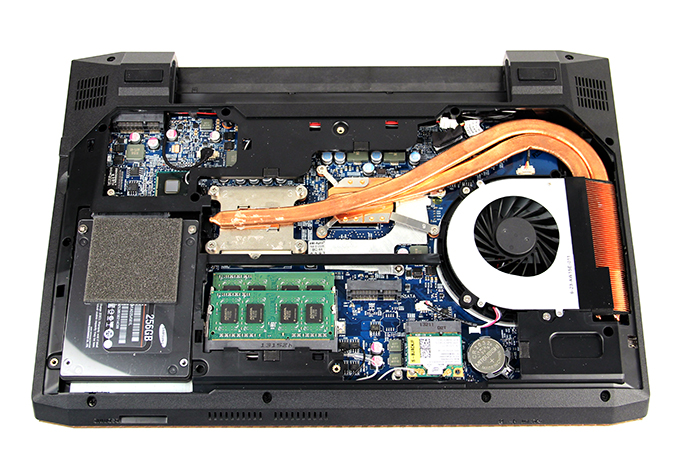 As we have mentioned earlier, the XG13 is highly customizable. In fact, apart from the NVIDIA GeForce GTX 765M GPU, everything else, including the processor, can be picked from a pretty extensive options list. Our review unit came with a quad-core Intel Core i7-4700MQ processor (2.4GHz, 6MB cache), 8GB of RAM and a 256GB Samsung SSD 840 Pro SSD.

For those of you are familiar with Intel’s various SKUs, you would notice that Aftershock has opted for a slightly more powerful processor than both the Razer Blade and MSI GE40. The Core i7-4700MQ has a 200MHz advantage over the Core i7-4702MQ/HQ processors used in the Razer and MSI notebooks, but it also suffers from a higher TDP - 47W as opposed to 37W. How this will affect battery life will be interesting to see as we share that on the following page. Additionally, users can spec their XG13 with more powerful Core i7-4800MQ (2.7GHz, 6MB cache) and Core i7-4900MQ processors (2.8GHz, 8MB L3 cache). 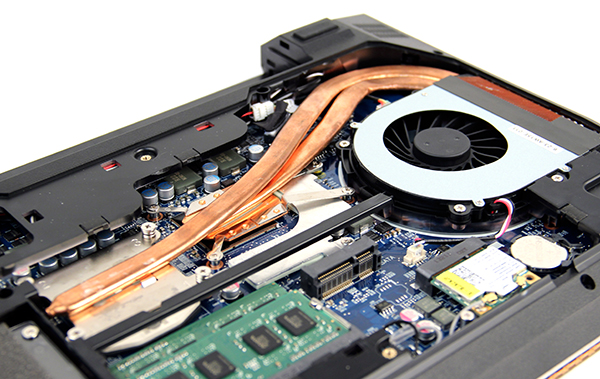 As for storage, the Aftershock XG13 comes with two mSATA bays and a regular 2.5-inch drive bay. Our unit came with a 256GB Samsung SSD 840 Pro SSD, but it can also be equipped with hard disk drives or even hybrid drives. Alternatively, if you have a particular drive in mind that you want to use - maybe a spare SSD lying around at home - you could bring it down to Aftershock and have them fit it in to your notebook. The ideal setup in our books would be to have two mSATA SSDs in RAID 1 configuration and have a standard but spacious hard disk drive in the 2.5-inch drive bay. This would give you the best of both worlds of speed and capacity. 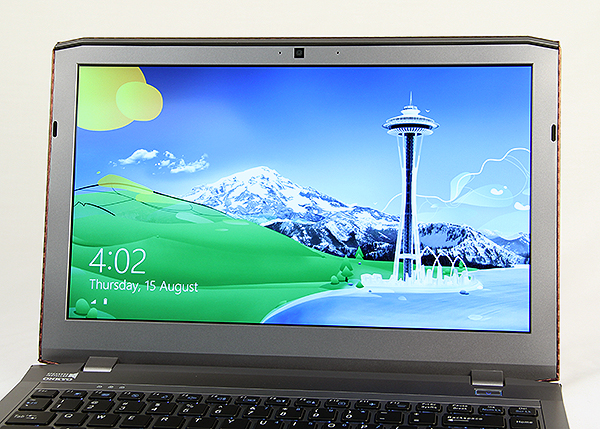 Unlike its rivals which use 1600 x 900 TN display panels, Aftershock has decided to go with a Full-HD (1080p) IPS panel. The difference is night and day. The XG13’s display looks so crisp, sharp and bright when put next to the Razer Blade. For demanding users who require accurate color representation, you could pay an additional fee and have Aftershock calibrate the monitor for you.

Other aspects of the XG13 that you can customize include the amount of RAM, Wi-Fi connectivity (standard, Intel N Advanced 6235 or Killer Wireless), the type of thermal compound used, operating system and length of warranty. 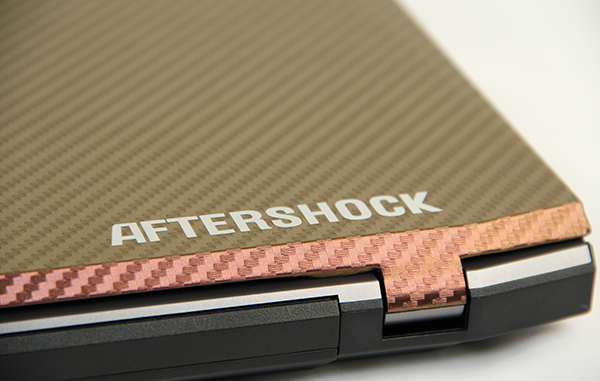 Design is an aspect where the Aftershock XG13 falls a little flat. While the 14-inch Razer Blade is a thing of beauty, the XG13 looks decidedly industrial and bulky. Aftershock offers a skinning service for customers, and they can choose to decorate the notebook with a variety of wraps. Our unit came with a carbon fiber wrap that has a unique color that seems to change depending on the light. This is a nice touch, but it does not detract from the fact that the XG13 is hardly a looker. Fortunately, despite extensive use of plastic for the chassis, the XG13 still feels solid and rigid - the same cannot be said for the MSI GE40. There is no noticeable flex in the chassis.

At 31.9mm thick, it is slightly thicker than the MSI GE40 and nearly twice as thick as the Razer Blade. It makes up for that with a good selection of I/O ports - three USB 3.0 ports, a single USB 2.0 port, VGA and HDMI output. The inclusion of VGA output is slightly puzzling, as we would rather have a DisplayPort so as to easily drive high-resolution displays.

The chiclet keyboard is excellent, but like the Razer, could use with a little more travel to improve tactility. The keys have backlights, which are white by default, but can be customized for a small fee. Additional colors include orange, red, blue, pink and more. Aftershock can even customize backlights for individual keys. For example, Aftershock can fit red backlights on WASD while keeping the rest of the keyboard backlights white. 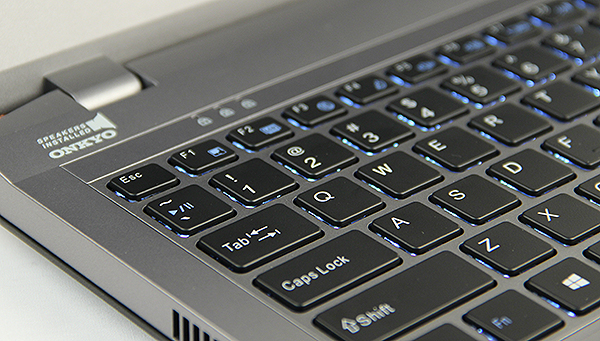 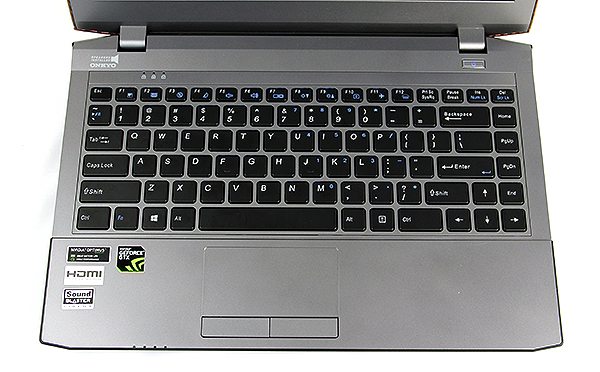 Like MSI and Razer, the Aftershock eschews the a clickable trackpad for a regular trackpad with two separate button for the left and right click functions. The two buttons are nicely sized, but at the expense of the trackpad, which makes it too small to be used comfortably. If it is any consolation, the trackpad is very responsive and accurate, and we would not mind using them for extended periods if we had no mouse.

The speakers ares sourced from Japanese audio specialists Onkyo, but they sounded like typical notebook speakers, which is to say they sounded flat, thin and generally unimpressive.

Write a Review
Compare This | Specifications
Good performance
Superb screen
Excellent keyboard and accurate trackpad
Lots of customizable options
Drab looks, lots of plastic
Mediocre battery life
Thicker than direct rivals
Our articles may contain affiliate links. If you buy through these links, we may earn a small commission.