What's the big deal about this laptop? 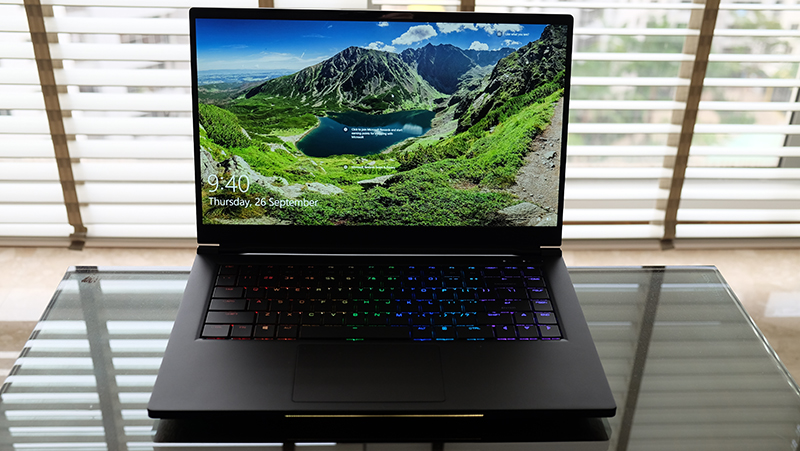 I think it's safe to say that no one was expecting this laptop. It literally came out of nowhere, and it was a surprise to see Intel working with a smaller brand like Eluktronics to bring this laptop to fruition, instead of a more established player like ASUS or Razer. As it turns out, local PC builder Aftershock was also among the many partners that Intel consulted with, and it's helping bring the notebook to Singapore in the form of the Vapor 15 Pro. The laptop goes by different names in different regions – it retails as the XMG Fusion 15 and the Maingear Element in Europe and the US respectively.

There are a few reasons why you should be excited, but the biggest selling point for me is probably the price. At S$2,799, the Vapor 15 Pro is significantly cheaper than anything available on the market right now. Its closest competitor is probably the Acer Predator Triton 500, and that costs S$3,198. 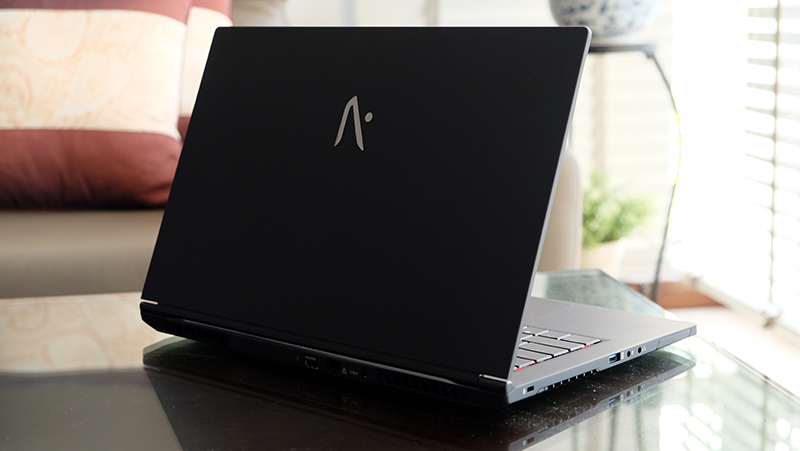 Now, you're probably thinking, what's the catch? As far as I can tell though, there isn't one. This is actually a premium notebook with a budget price. Normally, if a laptop had a GeForce RTX 2070 Max-Q and only cost this much, I'd expect some trade-offs. Maybe the build quality isn't the best. Perhaps the display is really lacklustre. Or maybe, it has a really tiny battery and runs super loud and hot. The good news is that the Vapor 15 Pro suffers from none of these problems.

Build quality is excellent and there's barely any flex when pushing down on the palm rests or keyboard. The hinge opens in a single fluid motion, and it's perfectly capable of being operated with one hand. I don't like that you can see the seams where the different pieces of the notebook's shell come together as it slightly cheapens the overall look, but I'm really nitpicking here for what it offers. That said, there's a reason for the plastic cutout you see below – there's one on each side and it's there to allow Wi-Fi signals to pass through. 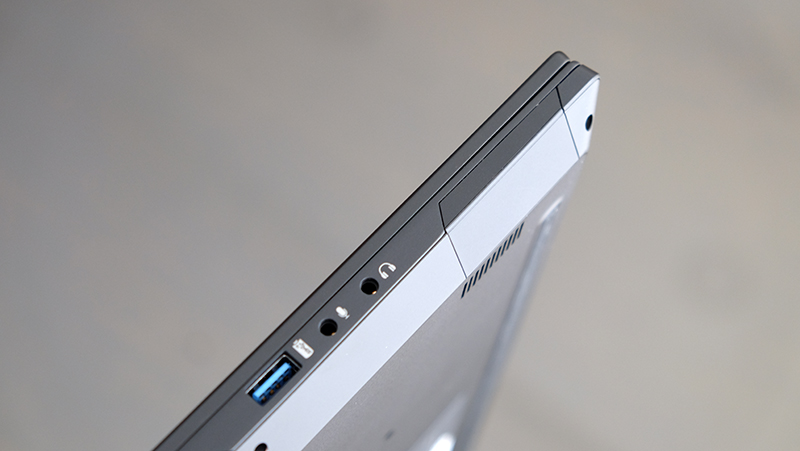 This is a high-end laptop through and through though, and it comes with just about everything you could want, including a Thunderbolt 3 port, SD card reader, and an infrared camera for Windows Hello face recognition. It's even got a glass precision trackpad with integrated buttons and an RGB backlit mechanical keyboard that supports per-key customisations.

No need to worry about battery life either, since it comes with a large 94Wh battery, rivalling the Gigabyte Aero 15 OLED XA. 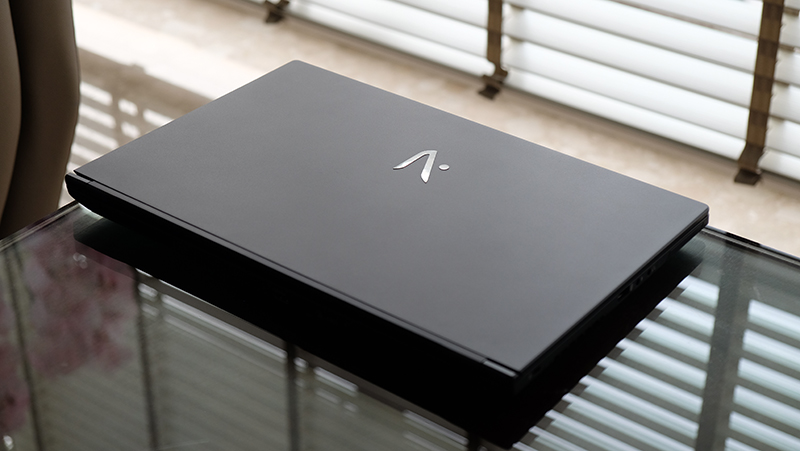 In fact, I'd go so far as to say that the Vapor 15 Pro is a potential Razer Blade 15 killer. It even looks a lot like one, with its black magnesium alloy chassis and minimalist design. The Blade 15 has so far gone unchallenged in my books in terms of design, but the Vapor 15 Pro has come the closest to upsetting it. 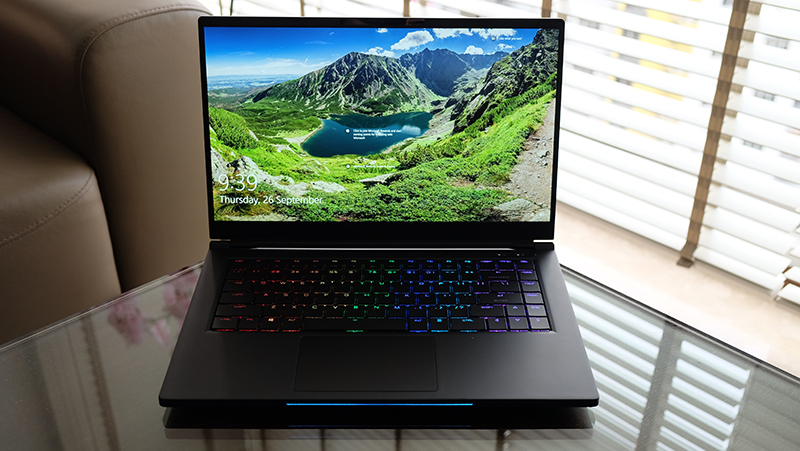 What's more, this is the world's lightest GeForce RTX 2070 Max-Q laptop at just 1.87kg. It features a full magnesium alloy body and is noticeably lighter in hand than the competition. I've gotten used to reviewing laptops that weigh just over 2kg, and the difference in weight is obvious.

Another important point to mention is that Intel has supposedly optimised the notebook for better thermal performance. Intel makes the chips that go into your laptop, so you'd expect that they'd know a lot about how to make the chip run better. The Vapor 15 Pro uses Intel's custom BIOS and the bundled Control Center program offers up three different performance profiles – Battery saver, Balanced, and Performance – each of which results in meaningful differences in power consumption and performance. Make no mistake, these modes aren't just for show as we've found out. 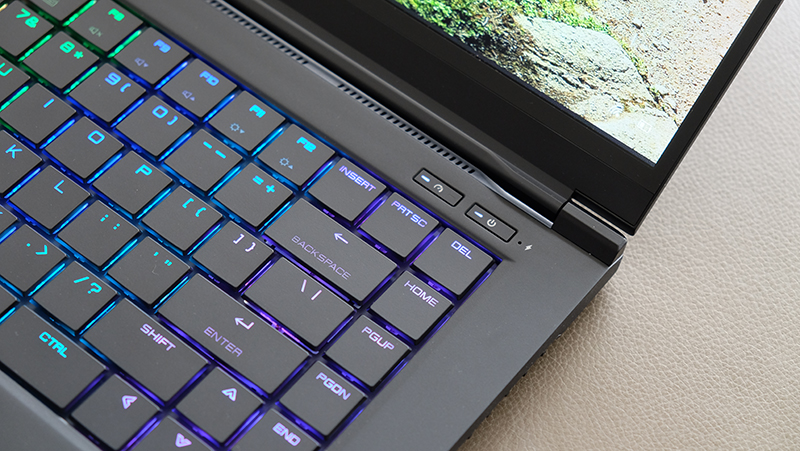 A dedicated button in the top right lets you toggle between the three modes, with helpful LED indicators to show what mode you're on – two lighted LEDs for Performance, one for Balanced, and none for Battery saver.

So what does it have?

When it comes to hardware specifications, the Vapor 15 Pro doesn't offer anything out of the ordinary. These specifications are pretty much a given on any high-end gaming laptop today, and you get an Intel Core i7-9750H processor, 16GB of DDR4 RAM, an NVIDIA GeForce RTX 2070 Max-Q, and a 512GB SSD. There are two M.2 sockets though, and the DIMM slots are easily accessible, so you should be able to perform your own upgrades pretty easily.

The 1,920 x 1,080-pixel 144Hz IPS display is similarly par for the course, and there is no support for NVIDIA G-Sync. I don't feel like the absence of G-Sync will make too much of a difference on such a high refresh rate screen, and the Razer Blade 15 doesn't offer it either. The display itself is more than good enough for games. Colours are reasonably bright and vivid and appear in no way washed out or inaccurate. The screen was also bright enough for me at maximum brightness – it works well under direct overhead lighting and the matte surface helps dispel reflections. 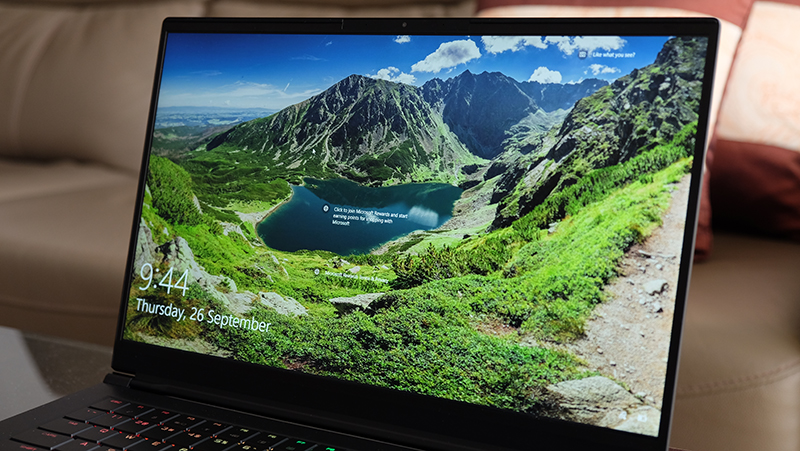 It also has a mechanical keyboard equipped with tactile switches. The keyboard supports per-key RGB customisations and you can switch between four different levels of brightness on the keyboard itself. The backlight is well-implemented too. It is bright and clearly visible, considerably better than the faint lighting I've observed on some other notebooks like the Aorus 15 XA.

This is not a chiclet keyboard though, and there is less distinction between individual keys. Personally, this wasn't too much of a problem for me and I enjoy the extra travel distance and feedback that the mechanical switches give. However, I can see how some people might need time to get used to it, especially if you're more used to chiclet keyboards where there's a separate cutout for each key. 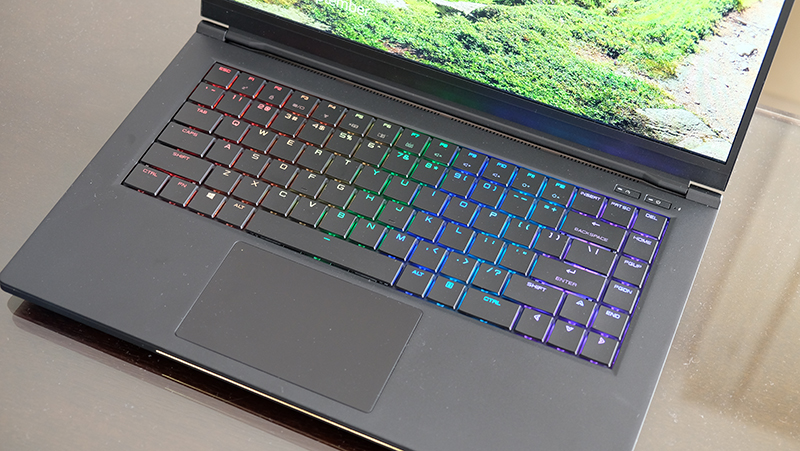 Unsurprisingly, there is some key wobble, especially on larger keys like the spacebar and Shift. Still, it's not too excessive, and I don't think you'll notice it while typing, unless you like to hit the large keys on their corners for some reason.

The switches themselves are manufactured by GTMX, and they each have a tiny stabiliser bar, even for the smaller keys. 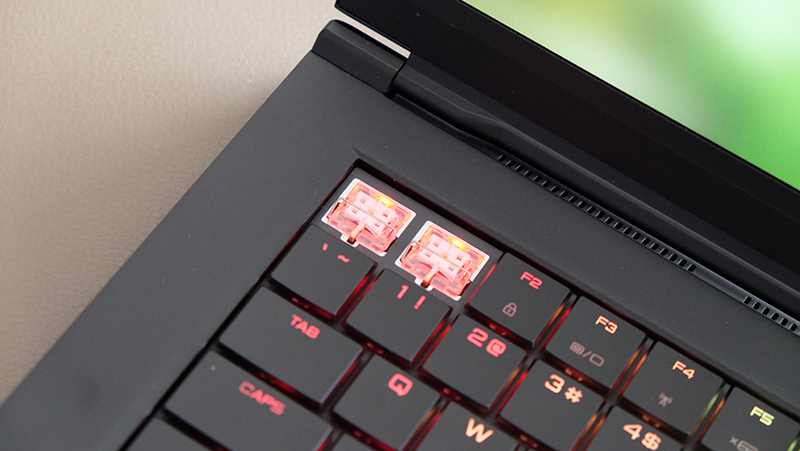 The trackpad itself can be disabled by double-tapping in the top left corner. Once disabled, an LED indicator there will come on, so you don't have to wonder whether it's disabled or simply broken. The glass coating feels really slick and nice, and the integrated buttons help free up more space and make it look less cramped.

A separated LED light bar sits on the front edge of the laptop. You can customise it using the Control Center software as well or disable it entirely if you don't like it.

Finally, the laptop has two bottom-facing speakers, but they aren't much to get excited about. Sound quality is average, and while the volume is sufficiently loud, it's still lacking in weight in the low-end and ends up sounding a bit hollow.

The Vapor 15 Pro has just about everything you could need in terms of networking and connectivity options. It's equipped with an Intel Wireless-AX200 for Wi-Fi 6 support and a Gigabit Ethernet port powered by a Realtek controller. 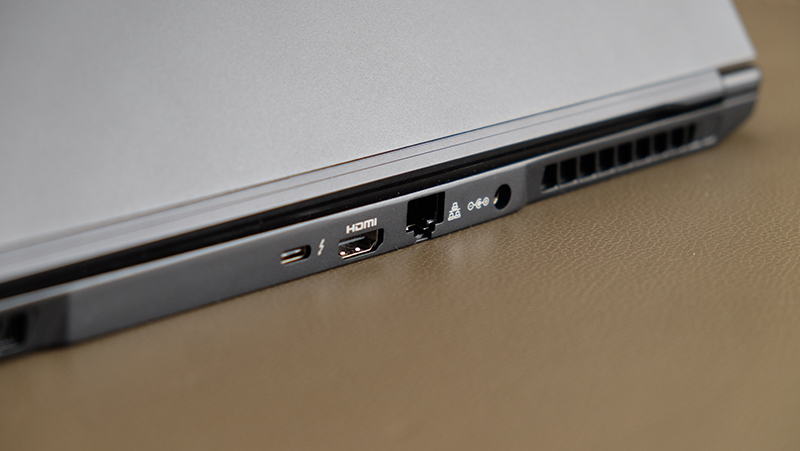 It also features a Thunderbolt 3 port round the back, in addition to an HDMI 2.0 output, Ethernet jack, and the power connector. I find the port placement quite thoughtful, since their location at the rear makes cable management easier when you're connecting the laptop to a Thunderbolt 3 dock or outputting to an external monitor. Similarly, having the power connector at the back means that the cable won't bother you too much when you're gaming or working. 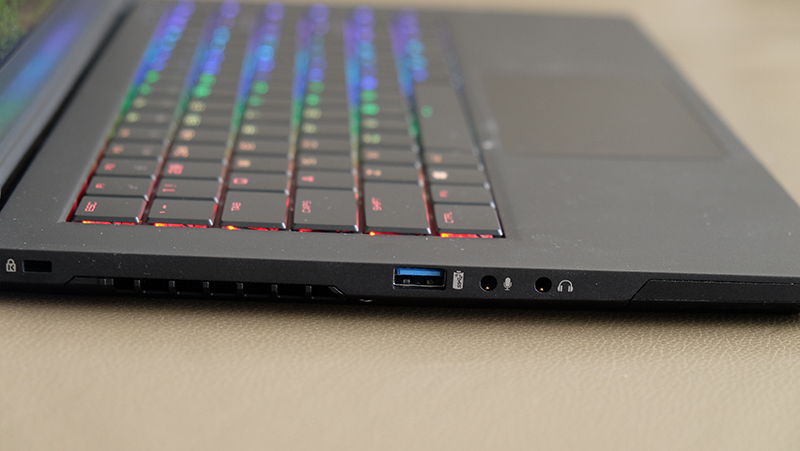 On the sides, you'll find one USB 3.1 (Gen 2) Type-A and two USB 3.1 (Gen 1) Type-A ports, along with the SD card reader on the right and dedicated headphone and microphone jacks on the left. 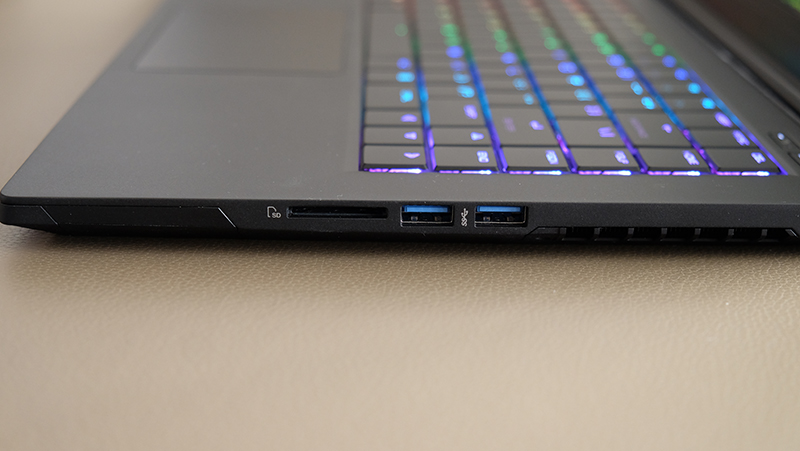 This is really one of the most complete packages on a gaming laptop. To my knowledge, only the HP Omen 15 and Gigabyte Aero 15 OLED XA have both a Thunderbolt 3 port and a full-sized SD card reader, and they both cost S$3,599 and S$3,799 respectively.