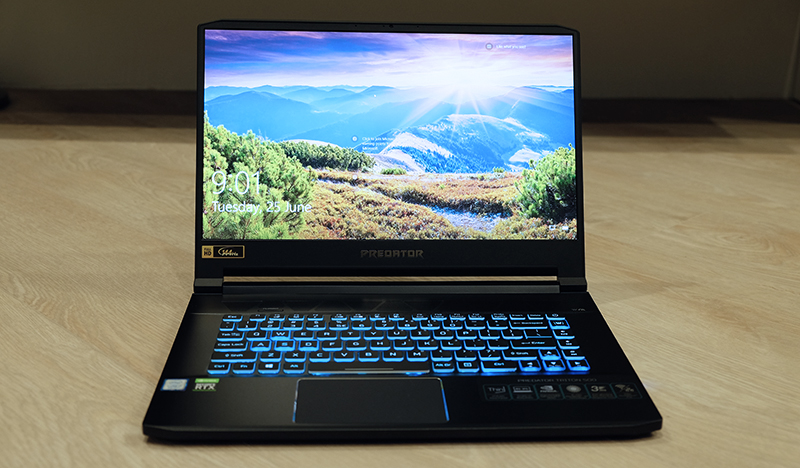 The Predator Triton 500 is one of the sleeker 15-inch gaming notebooks around, tipping the scales at just 2kg and measuring just 17.9mm thick. It has a pretty minimalist design for an Acer laptop. If you were expecting obnoxious vents and plenty of red, this laptop thankfully has none of that. Its dusky aluminum shell is best described as blue-gray, and it is complemented by translucent blue accents around select keys, such as the WASD key cluster and the arrow keys. The Predator logo on the lid lights up in blue as well, and I find the soft glow it gives off pretty attractive.

All things considered, it's not hard to see why Acer named the laptop after Triton, the messenger of the sea in Greek mythology and son of Poseidon. But aside from the small design touches that evoke the ocean, the Triton 500 has a pretty understated look, with a smooth lid and subtle angles that don't really scream for too much attention. 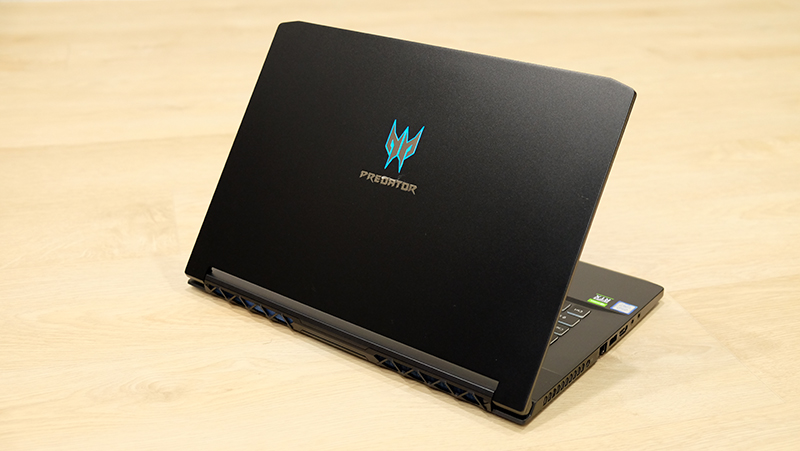 One thing that's not low-key though – the really jarring and awful boot-up sound sequence that sounds like something out of a cheesy sci-fi movie. There doesn't seem to be a way to turn it off, which makes powering on the laptop a really awkward affair if there's anyone in the vicinity.

Contrary to appearances, the triangular grilles above the keyboard are intake vents and not speakers. The actual speakers fire through teeny openings at the bottom of the notebook, and they unfortunately sound as tiny as they look. The sound coming from these just feel lacking in body and oomph, particularly at the low end, and clarity is not the best either. 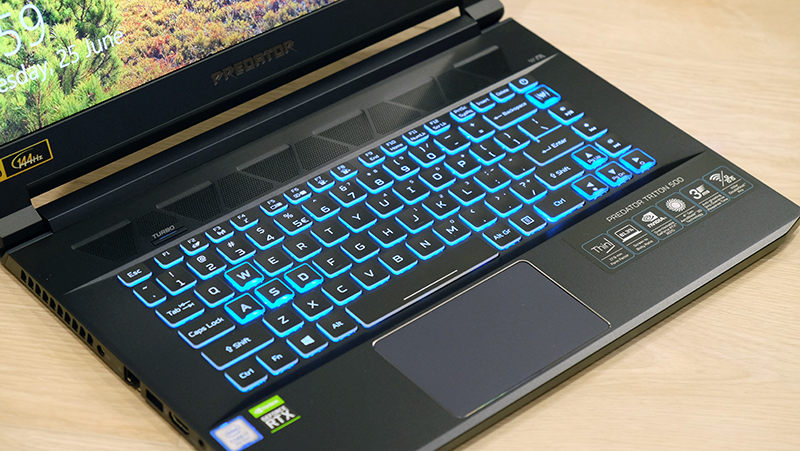 The good news is that the display is pretty good. It's nice and bright, and I couldn't discern any obvious bias toward the cooler or warmer end of the spectrum. The IPS panel means that viewing angles are excellent as well, with barely any color shift when looking at it from the side. More importantly, the 144Hz refresh rate ensures that everything from games to moving windows around on your desktop feels smooth and fluid. The GeForce RTX 2070 Max-Q still can't quite make full use of that refresh rate in AAA games, but the high refresh rate still goes a long way toward helping everything feel more responsive, especially in less demanding esports titles where you'll actually be able to achieve over 100fps.

The screen doesn't offer NVIDIA G-Sync, but variable refresh rate technology isn't as important when you have a high refresh rate panel like this one.

The display is framed by thin bezels on all three sides, which helps minimize the laptop's footprint. There's also enough room in the top bezel for the webcam, so you don't have to contend with awkward camera angles. However, you still have to deal with a rather thick bottom bezel and the Predator branding stamped on it. If Acer ever releases a second iteration of this laptop, I'd really like to see a slimmed down bottom bezel. 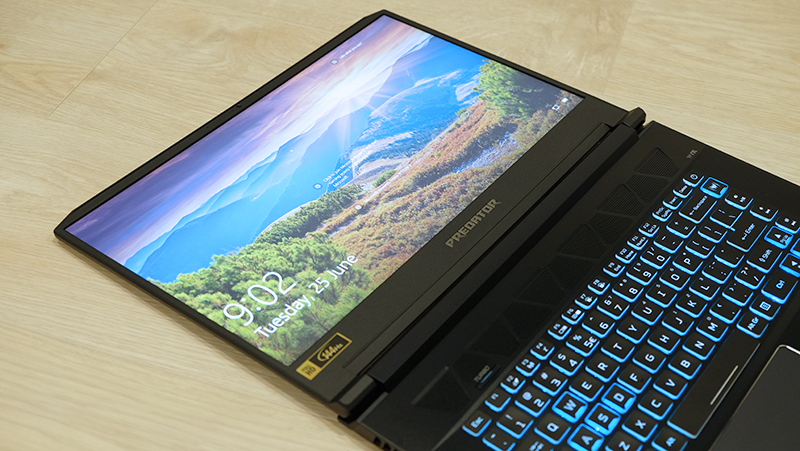 The keyboard itself has a 1.6mm travel distance, which is okay but not great. I do miss the mechanical keyboard on the Triton 700, but Acer probably wouldn't have been able to make the laptop this thin. There is also no per-key RGB customization for the keyboard backlighting, and you're limited to just three independent lighting zones. That's pretty disappointing, and I think per-key backlighting should definitely be a feature at this price point. There is also no number pad, which may or may not be a deal-breaker for you. Personally, I don't find that too big a deal, but it might be important to you if you want to use the laptop for work. 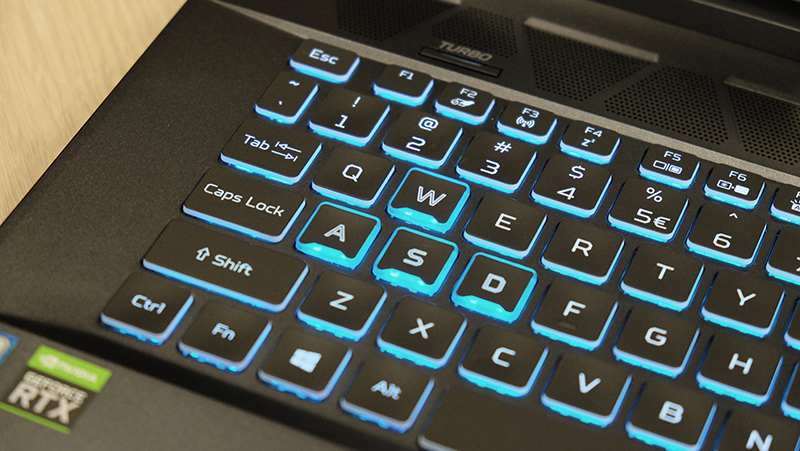 The keyboard also has a dedicated button in the top-right corner for launching the PredatorSense software. I like the software quite a bit, and it offers easy and intuitive access to fan controls, GPU overclocking, lighting customizations, and a system monitoring panel. However, I can't say the same about the other software that comes pre-installed with the Triton 500. In fact, they're best described as bloatware, and one of the first things you'll want to do is probably uninstall nearly everything in the Control Panel that comes with Acer in its name. 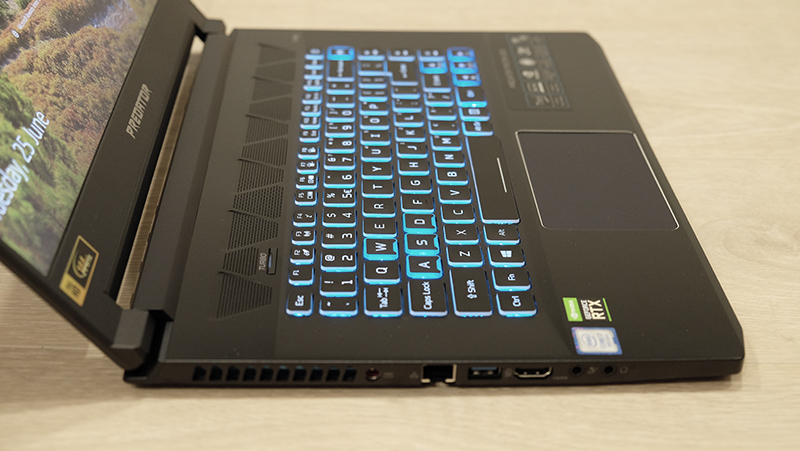 The trackpad is a little on the small side, especially for a 15.6-inch notebook. Fortunately, it's a Precision Touchpad, so tracking and gestures feel nice and accurate. The left- and right-click buttons are integrated into the touchpad as well, but while there's quite a bit of travel distance to each button, I felt like there could have been more resistance and feedback.

When it comes to ports and connectors, the Triton 500 has a pretty decent selection. It features three USB 3.1 (Gen 1) Type-A, one Thunderbolt 3, an Ethernet jack, one HDMI 2.0, and one Mini DisplayPort 1.4 output. There are also dedicated headphone and microphone jacks, but I particularly like the inclusion of the Thunderbolt 3 port, which oddly enough isn't yet a standard inclusion on gaming notebooks today. The Ethernet port is also powered by a Killer E3000 2.5G controller, which means it supports speeds up to 2.5Gbps, assuming you have compatible hardware.

I also wish that the I/O ports were either moved forward or pushed further back on the notebook. Right now they sit right smack in the middle, which is especially awkward for the power cable as it'll either end up blocking the vents or its adjacent ports. 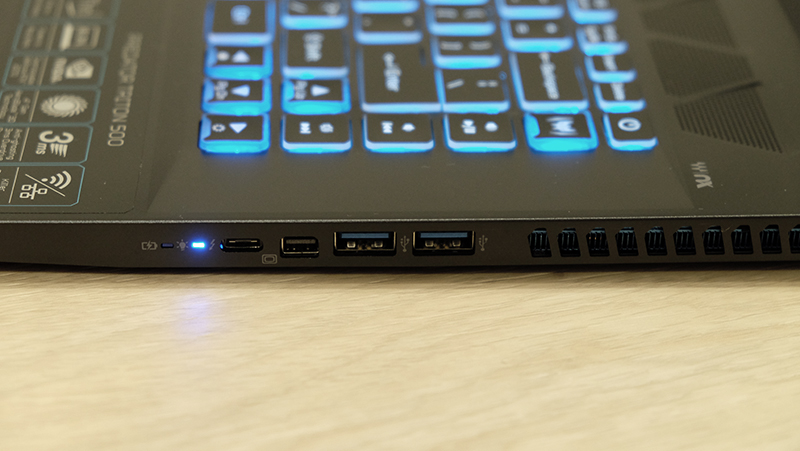 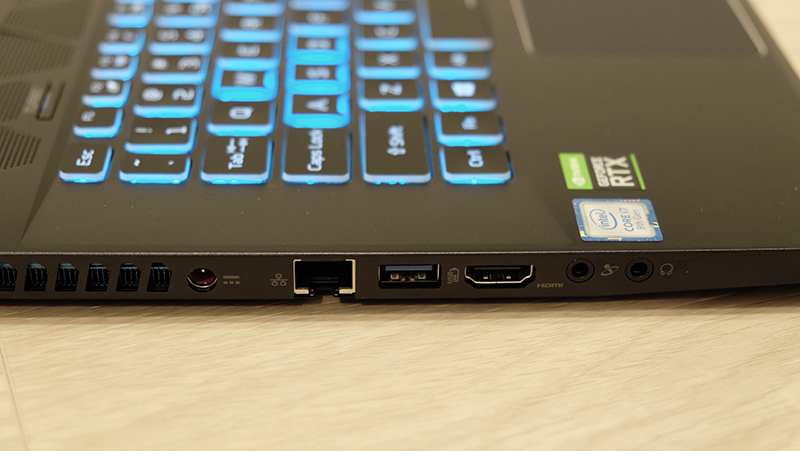 Cooling is handled by a total of three fans and five heat pipes. Some are shared across the CPU and GPU, but they each also get their own dedicated heat pipes, as does the VRM circuitry. The three fans, of which two are dedicated to the GPU, do quite a good job of keeping the laptop cool, and there are four vents at the side where hot air is exhausted. 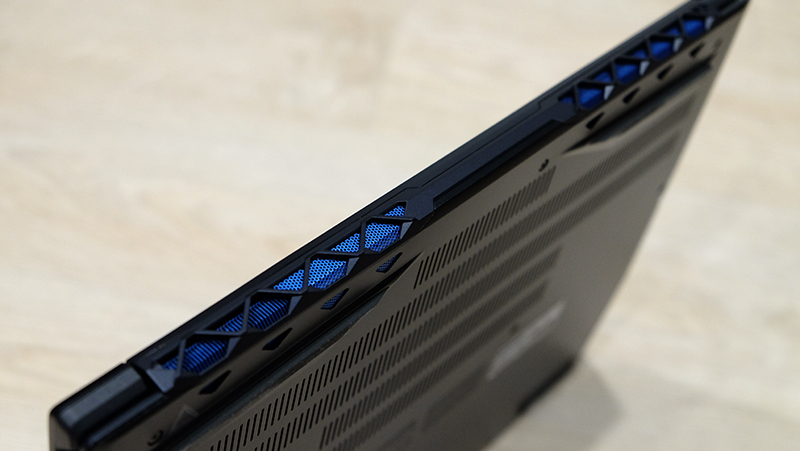 The PredatorSense software makes it easy to ramp up or customize the fan speeds, but there is also a dedicated Turbo button that instantly sets both the GPU overclock and fans to maximum for a one-click performance boost. The fans do get quite loud even in auto mode, and you'll definitely want to use headphones to block them out. However, I actually find their pitch less jarring than on some other notebooks. 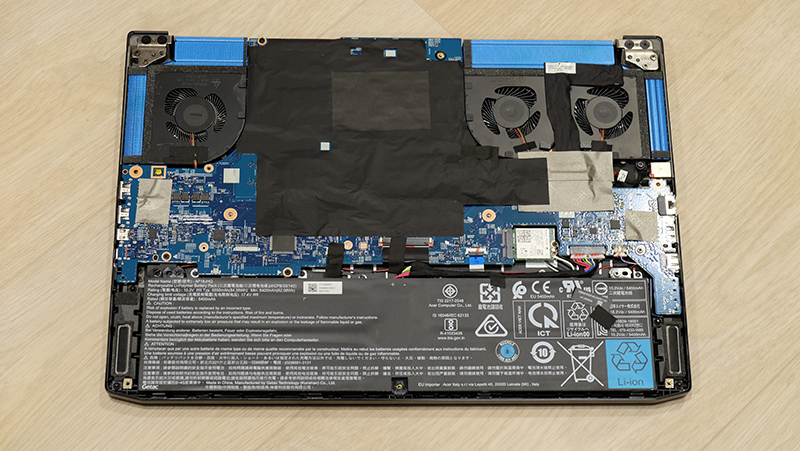 The bottom panel is held in place by Torx screws, which you'll need a T6 screwdriver to remove. Sadly, the Triton 500 doesn't rank high in terms of upgradeability, as all you see after removing the bottom panel are the battery, three fans, and the Killer Wireless-AC 1550i network adapter. Things like the DIMM and M.2 slots are located on the other side of the motherboard, which means you'll have to remove the entire thing from the chassis, an unenviable task.