Intel is the biggest semiconductor chip maker in the world and much of its business resides in the PC industry where OEMs use its chips/platforms for building servers and PCs. However, the past few years saw the surge in popularity of smartphone and tablet devices which ushered in an era that many label as "post-PC".

Its first attempt at cracking the lucrative mobile market begun at CES 2012, where Intel President and CEO Paul Otellini made a couple of major announcements around their smartphone platform (formerly codenamed Medfield). One of the more significant announcements was its reference design platform, which is based on the Intel Atom Z2460 single-core processor.

Motorola also entered into a multi-year, multi-device strategic partnership with Intel to build smartphones and tablets based on the latter's processors. Eight months later, both companies jointly announced the first smartphone to run on a 2.0GHz processor, the Razr i.

On 31st January, Acer and Intel announced the availability of the Acer Liquid C1 in Bangkok. It is the first smartphone based on Intel Atom processor Z2420 for the Asia Pacific region. Touted as a milestone in the history of processor chips, the Z2420 processor is marketed to deliver a great user experience in the aspects of battery life, rich graphics, advanced camera features, smooth web browsing and multitasking. So does the Acer Liquid C1 live up to the expectations? We managed to grab one from overseas, so let's find out in this review. Before we dive into the review, here's a quick look at its specs: -

Acer does not break new grounds with the design of the Liquid C1 - it's just run-of-the-mill. Although the chassis is made up of plastic, the Liquid C1 is a bit on the heavy side at 140g. Considering that the aluminum-clad HTC One S weighs a mere 119.5g and the plastic-clad Huawei Ascend P1 is 10g lighter, it seems that the Acer phone can afford to shed some weight to be more competitive. However, the Acer phone packs much higher battery capacity, so we'll find out on the next page if it is worth the extra weight. 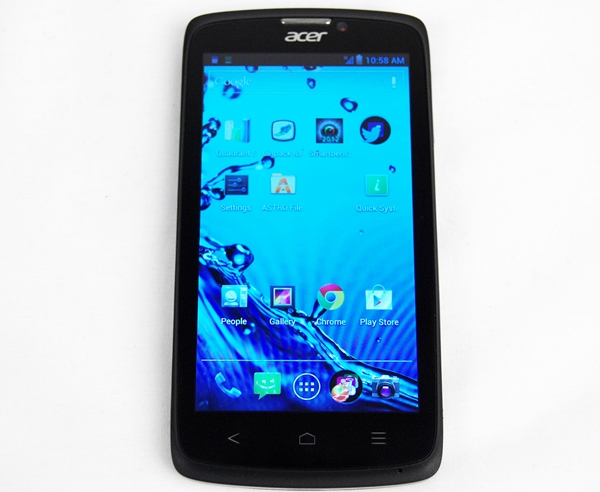 Located below the 4.3-inch display are three capacitive navigation buttons (Back, Home, Menu) that light up whenever you tap on them. A 0.3-megapixel front-facing camera resides just beside the Acer brand near the top of the phone. 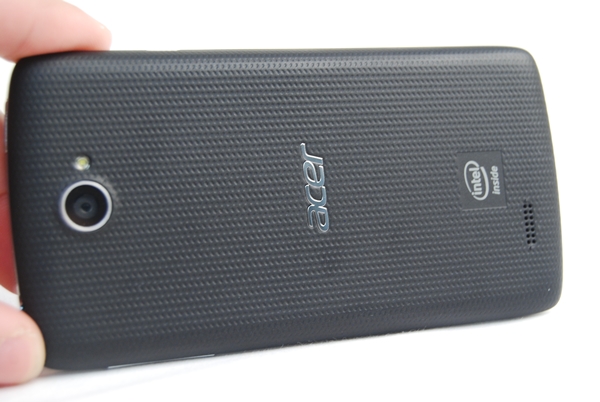 Despite being an entry level device, the Liquid C1 comes with a decent suite of data connectivity options such as a microSD card slot (supports up to 32GB), GPS, Bluetooth 2.1, micro-USB 2.0. We appreciate the addition of a memory card slot since some high-end phones such as the LG Nexus 4 does not have one and yet comes with limited built-in memory. 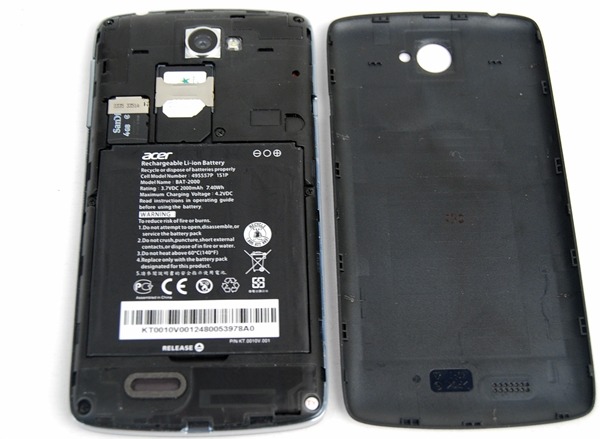 The Liquid C1 is powered by Android 4.0 Ice Cream Sandwich and does not sport any customized user interface. It's strange that the phone ships with Android 4.0, a platform which was released more than a year ago. Even the recently announced Samsung Galaxy S III mini (yet another entry-level device) runs on Android 4.1 Jelly Bean.

Mike Bell, Intel's Vice President of Ultra Mobility once commented that Intel is "a first class citizen" in the Android ecosystem, hence it is able to release processors which are optimized for each new iteration of Android OS. Android 4.1 has been out for close to a year already, and we see no reason for not shipping it onboard the Liquid C1. As such, it's a slight letdown in terms of OS support.

Write a Review
Compare This | Specifications
Good feel and handling
Stock Android UI
microSD card slot
Affordable
Disappointing imaging performance
Battery life could be better
Our articles may contain affiliate links. If you buy through these links, we may earn a small commission.
Sponsored Links