It's been a long time since we've seen any sub-10-inch Windows devices. There was a period in 2006 where probably-better-forgotten UMPCs (Ultra Mobile PCs) such as the 7-inch Windows XP-based Samsung Q1 UMPC were briefly in vogue, but since then the sub-10-inch device category has been dominated by iOS with its iPad Mini, and Android, thanks to the growing phablet category and the wealth of 7-inch Android tablets available on the market. Until now, all Windows 8 tablets - due in part to the OS naturally being well suited to larger devices - have been 10 to 13 inches.

Acer is no stranger to tablets, as its 2011 efforts show, the Acer Iconia Tab A500 and the smaller 7-inch Iconia Tab A100 were two of the first Android 3.2 Honeycomb tablets available on the market. It also has experience with Windows tablets such as the 10-inch Windows 7 based Iconia Tab W500. With the recently launched Iconia W3 tablet, Acer has built the world's first 8.1-inch tablet running Windows 8. First announced at Computex 2013, with a dual-core Intel Atom processor, a full version of Windows 8 (our version is running 32-bit Windows 8.1 Preview), a portable form factor and an affordable price of just S$499, the W3 looks like a very appealing buy. We find out if it's worth your money.

The W3 is heftier and thicker than an iPad Mini or Google Nexus 7, and weighs a fair bit more at 500g (the iPad Mini weighs just 308g). Despite its weight, the entire tablet is made of plastic.

On the front of the W3, its display is surrounded by a thin, matte white plastic bezel which is also used on the edges of the device. The bezel doesn't look too ugly, but compared to other consumer devices many of which sport edge-to-edge glass, it does look a little cheap in comparison. Button placement is fairly standard for a smaller tablet, with the Windows button located at the bottom when holding the W3 in portrait orientation. While this works great for reading content and using Windows 8's Modern UI, it's not so suitable for desktop-mode, which, naturally, feels more familiar in landscape orientation. 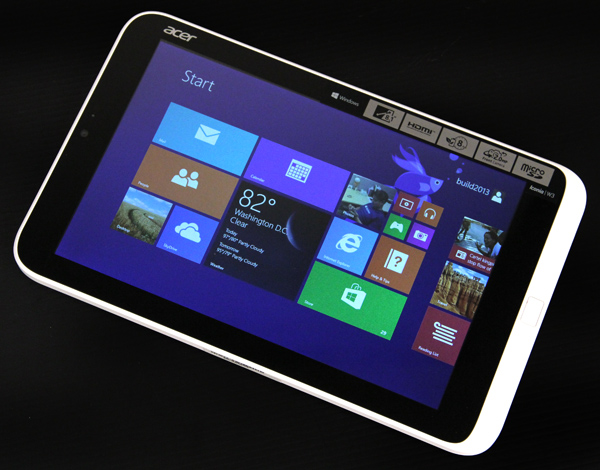 The rear of the device is finished in a metallic silver color. It's quite convincing from far away, but as soon as you get close, you can tell it's anything but metal. Up close, it actually looks quite cheap. 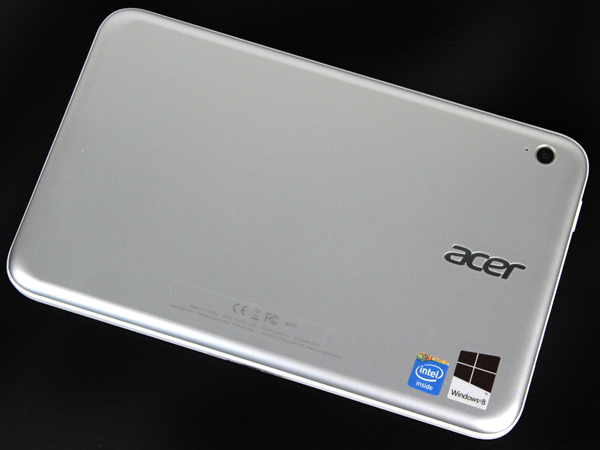 The W3 uses a 1280 x 800 pixel resolution display which isn't fantastic, but is acceptable for an 8-inch screen. Unfortunately, the screen itself is simply awful, with a very visible gauze-like, hazy coating that looks like someone left a cheap screen protector on it (they didn't - we checked). Viewing angles are also horrendous, and moving your head just a bit off-axis immediately results in a massive drop in image quality. Combined together, the screen is quite straining on the eyes, which is the last thing you want in a device you'll primarily be using for content consumption. 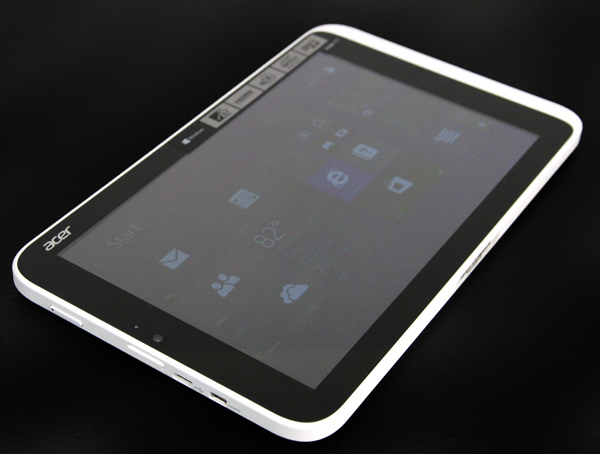 While we don't expect amazing, full HD, IPS panel displays from a device aimed solely at the value-inclined customer, even budget buyers deserve more than this. It's particularly problematic for a tablet, where you might not have an optimum viewing angle much of the time (e.g. when you're riding the train and have the device in your lap).

In use, Windows 8's Modern UI worked nicely on the 8-inch display and, despite the smaller size, the tiles never felt cramped or undersized. On the other hand, Windows desktop mode was a different story. The desktop doesn't scale well, and icons and menus are all tiny and hard to read on the 8.1-inch screen and even harder to accurately select with just the tip of your finger, even with the 150% scaling option. A stylus would certainly have helped here.

Audio on an 8-inch device was never going to be great in the first place but, even with low expectations, the W3 managed to produce some of the worst audio we've ever experienced from a portable device.

To start with, the W3's two speakers are located on the right-edge (with reference to landscape handling), which makes sense if you're holding the device in portrait orientation (as it would then be the bottom edge) but of course, the majority of videos (barring some amateurs on YouTube) are shot in landscape orientation, so naturally, you'll want to hold the device sideways to maximize screen space.

Unfortunately, when you do this, you'll find that at least one (if not both) of the two speakers are now muffled by your hand that's gripping the tablet. Even if you put the tablet down, with both speakers located on one side, all the sound comes from the right of the screen, producing a very unbalanced 'broken left speaker' effect. 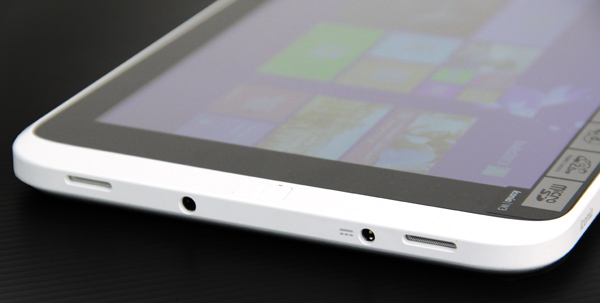 Worse yet, what audio you do get is very quiet (even at maximum volume) and very thin and tinny. The audio is so soft, you can barely hear it, even when seated in front of the device in a relatively quiet room. There's no bass to speak of either so you'll definitely want a good pair of headphones if you're planning on listening to anything on the W3.

Connectivity on the W3 is fairly decent, comprising of one mini-HDMI port and one micro-USB on the left-edge and a microSD card slot on the top-left edge (all positioning is based upon holding the W3 in landscape orientation).

Wireless connectivity is provided via the standard 802.11 a/b/g/n bands and the W3 also supports Bluetooth 4.0. The W3's casing also has what appears to be a slot for a SIM card, however, on our model it is filled in, so you'll be stuck with wireless for any internet connectivity needs. Unlike some other tablets, the W3 also has no NFC support, but that's understandable at its price point.

An optional Bluetooth keyboard designed for use with the W3 is sold separately for S$69. Strangely enough, the keyboard is actually larger than the tablet itself, sized at about 11-inches, which makes it look and feel a bit mismatched. 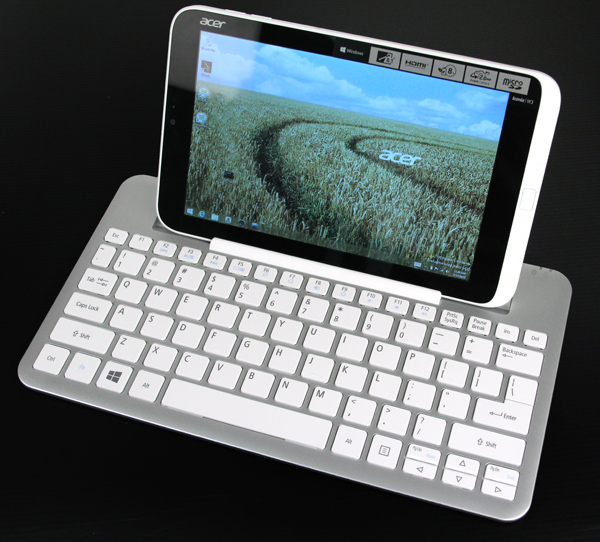 The keyboard has a rubberized slot along its top that the W3 can sit in, either in portrait or landscape orientation. The W3 feels quite secure and can be positioned in both landscape and portrait orientation, but unfortunately, the screen angle can't be adjusted. There's no docking option, so you'll have to make use of Bluetooth to connect the keyboard. The keyboard is powered by two AAA batteries.

The base of the keyboard has two pull out tabs that look like they could be tilted down to provide a better typing angle (such as how keyboard feet work) - but they don't. Functionally, they just provide slightly more stability for the tablet for when you're prodding the screen extra hard. One other annoyance is that if you put the W3 in portrait mode, the already quiet speakers become completely muffled (or even blocked) by the rubber slot. You could turn it the other way around of course, but then the webcam gets blocked. 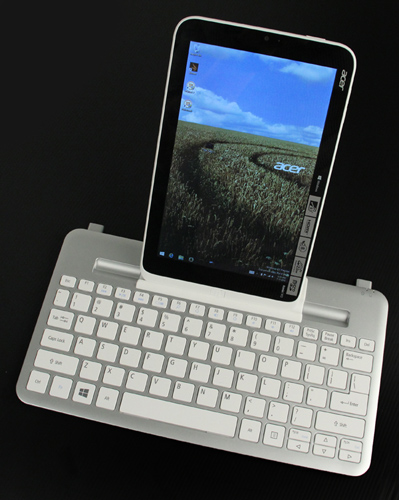 Typing on the keyboard is actually fairly decent, and the larger size certainly helps as there's plenty of space between the keys. The keys themselves are quite firm, but feel a bit shallow and the entire keyboard, which is made of the same, cheap-looking silver plastic as the rear of the W3, also has quite a lot of flex, which makes it feel cheap. Additionally, unlike many other add-on keyboards (such as Microsoft's Surface keyboard), Acer's version doesn't have a trackpad or even a track point which, combined with how small the screen is, massively restricts the possibility of using the W3 for any kind of serious work. This is quite a conundrum considering that the Iconia W3 runs on an x86 processing platform, using a full fledged Windows 8 operating system and is yet restricted by its design considerations. Further to this, the keyboard dock also lacks any ports, so if you want to plug in a mouse or USB trackpad, you'll have to use a converter via the W3's own micro-USB port - far from ideal.

The other design feature the Bluetooth keyboard offers is that it doubles up as a 'carrying case' for the W3. On the back of the keyboard, a W3-shaped slot can be utilized to protect the screen while you carry the device around. Of course, due to the keyboard's larger size, this completely negates the portability benefits of having a smaller tablet (and also has the added negative of looking a bit daft as, to the unknowing observer, you'll appear to just be carrying a small keyboard around with you). From our casual usage, we've also identified that the latch that secures the tablet to the keyboard is not quite adequate and you could easily dislodge it accidentally and send your tablet crashing to the ground (and yes, it did happen in our time of handling the Iconia W3). 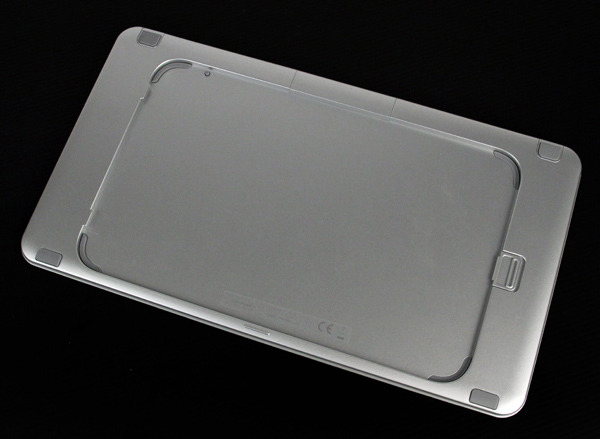 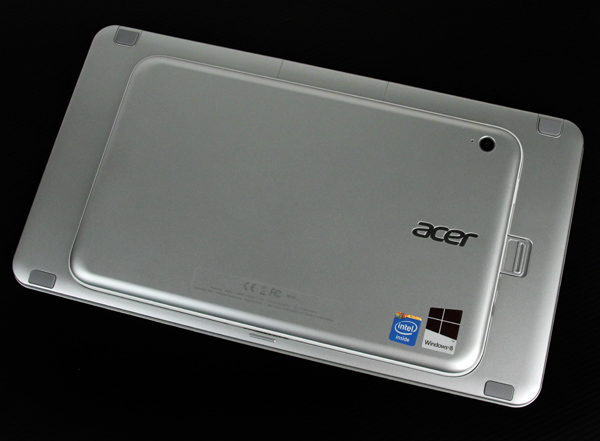