You have a number of media files on your PC, but watching them on your monitor while seated in an office chair isn’t the most comfortable of options. Hooking up your computer to your TV set is one viable alternative though that will require a long, unsightly video cable (often, it's more than a cable when you factor in the audio portion) connecting both machines. So just how do you enjoy your movies and videos in the comfort of your couch or bed?

The solution comes in the form of a media player, which in most cases, is basically a small box that holds your content and plays them back on your TV (or any display device it supports). While earlier generations of media players required you to put in a hard drive to hold the files, the affordability of external HDDs and flash media storage have resulted in many recent models not offering such an option. Moreover, most of them now sport built-in wired or wireless LAN support so that you can stream content residing anywhere on your network. In terms of format support, the last major shift was arguably the inclusion of 1080p video playback. With chipsets getting increasingly powerful, you'd be hard pressed to find a recent media player that can't support full HD video playback. In fact, a media player works even for those who don't download files or rip their discs. With built-in Internet connectivity, there are truckloads of web content to consume.

An established name in the media player space, AC Ryan has recently unveiled its flagship offering in its Playon! line of HD media players. Called the HD 3D, it supports various 3D video files and has built-in wireless LAN (802.11b/g/n) support. At S$249, it's S$50 more expensive than the Playon!HD2 that has neither of these features. If you're looking to future-proof your purchase, should you just pay the small premium and get the HD 3D? Read on for our thoughts. 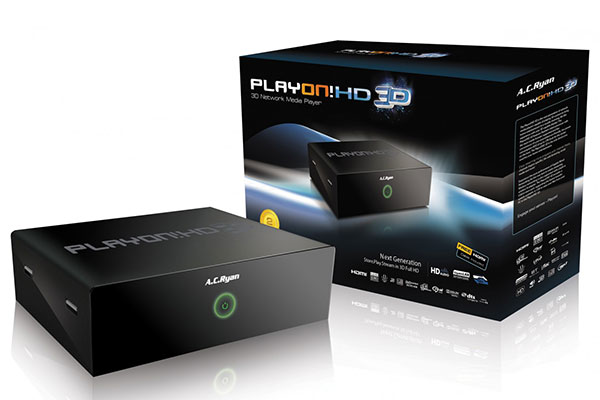