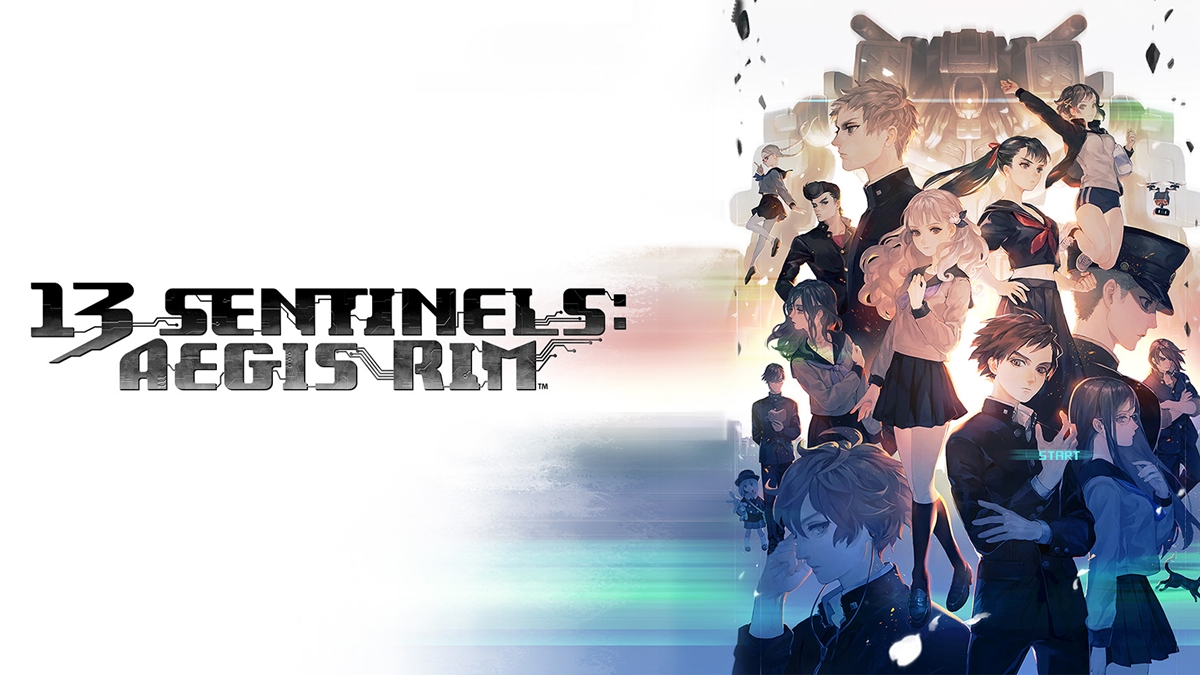 Developed by the team over at Vanillaware and published by Atlus, 13 Sentinels: Aegis Rim is arguably one of the more unconventional visual novel titles that I've played this year. Although it does feature the usual slate of exposition we see from the genre, it also has elements of real-time strategy and tower defense splashed in to spice things up, which can be quite entertaining depending on what you're looking out for. However, as you'll find out in a bit, being "unique" doesn't necessarily get you a fast pass to a high score.

To provide a bit of history, the game was originally developed and released within Japan for the PlayStation 4 in November 2019, where it garnered positive reviews from both visual novel and mecha fans. A worldwide release for PS4 and Nintendo Switch followed in September 2020 and April 2022 respectively, with similarly positive receptions overall. Of course, while positive performances are all well and good, what we're here to answer is whether the game can still present a decent case three years after its initial release. 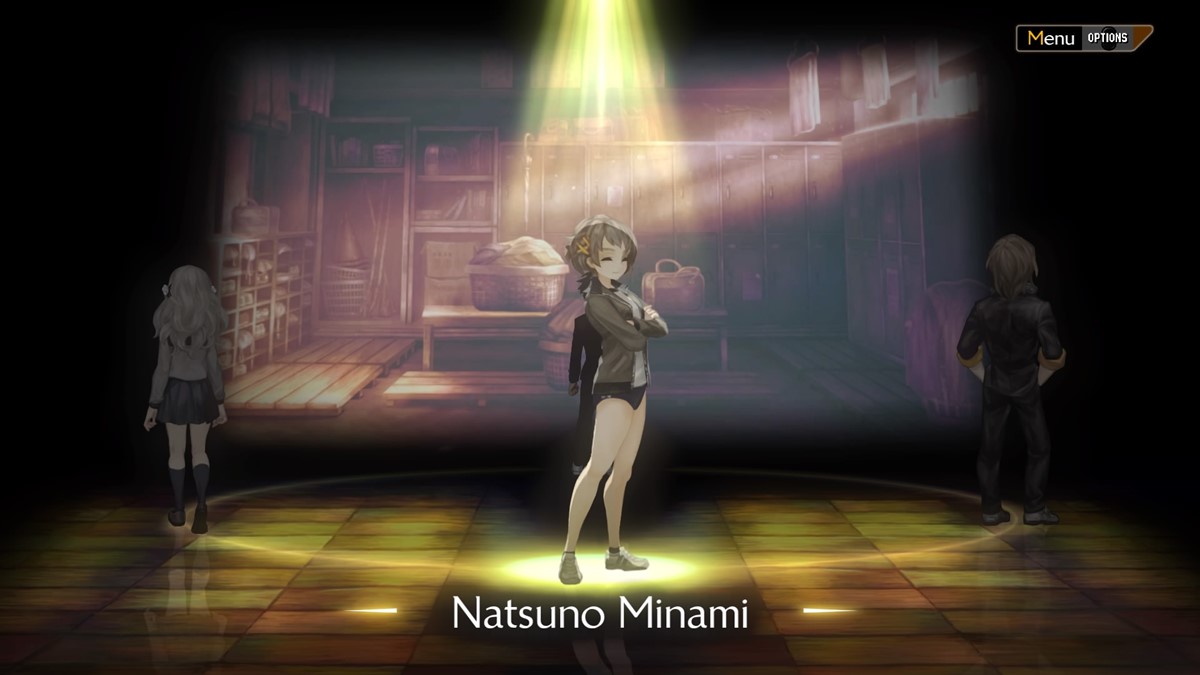 To kick things off, here's a rough idea of what the game is about. As the player, you'll recount the stories and experiences of 13 different high-school protagonists, each of whom pilots a weaponised mecha called a Sentinel against a robotic kaiju-like threat known as the Deimos.

However, what sets 13 Sentinels apart from your average Saturday morning Power Rangers episode is how the narrative toys with the concept of time travel. Most of the game is set during a fictitious version of Japan in 1985, but it also hops frequently between several other time periods, including 1945, 2025, 2065, and 2105. As you might have guessed by now, the protagonists themselves come from these different time periods, and as the player, it's up to you to "stitch" their individual experiences into one cohesive narrative as they face off against the Deimos threat. 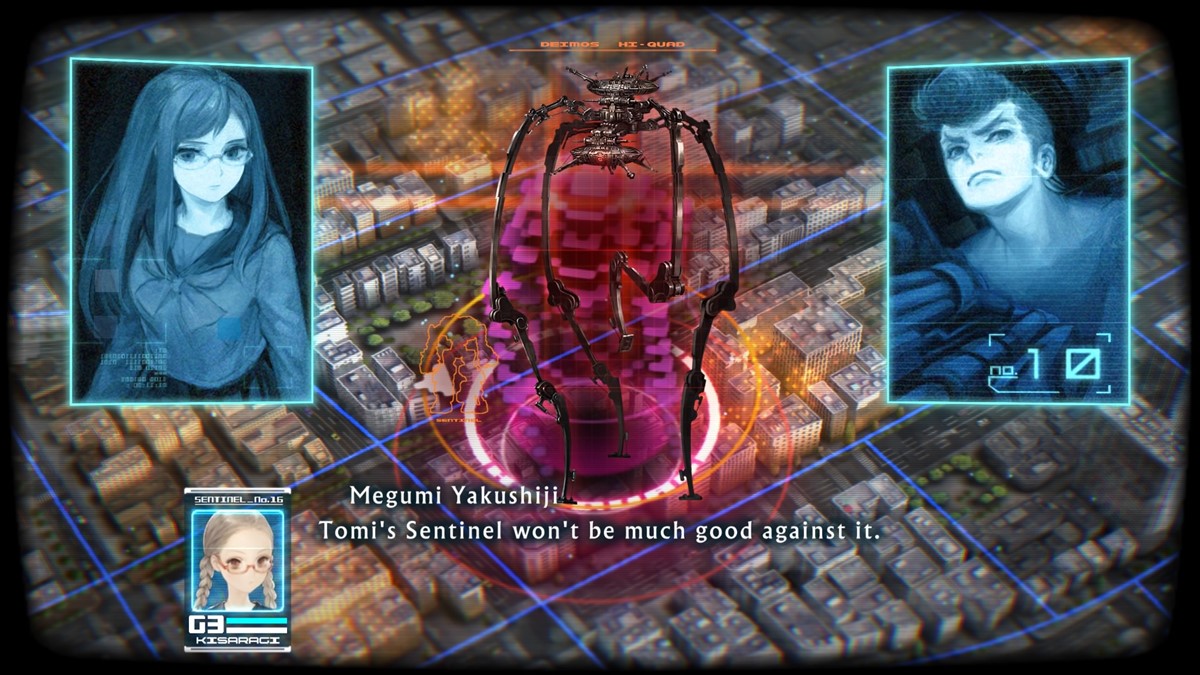 Here's where the RTS and tower defense elements come in. Apart from the standard point-and-click style of gameplay that we usually get from visual novel titles, 13 Sentinels also lets you take control of the protagonists and their Sentinels to fight against the invading kaiju. At the start of each "wave", or chapter in the story, you'll oversee a portion of the battle that's unfolding during the present day, while the protagonists' stories are relayed to you in flashback style afterward. During these bite-sized encounters, you'll often be tasked with a number of objectives, including taking out a swarm of Deimos attackers or protecting the defense system (called the Aegis) while it boots up.

An impressively substantial and gorgeous world Fundamentally, I've got literally zero issues with the ideas that 13 Sentinels is going for. People love having giant robots duke it out against aliens and otherworldly threats, and I, for one, see no reason to advise them otherwise. After all, just seeing the cover art or the main menu reminds me of mecha series like Neon Genesis Evangelion, though I will (happily) admit that 13 Sentinels has much less...wimpy protagonists.

Personal anime bias aside, the game certainly scores in terms of aesthetics and presentation. The visual novel sections are done up in a style that's oddly nostalgic regardless of which time period you happen to be exploring, not to mention that there are tons of references in the exposition to popular alien-related material, like War of the Worlds, Men in Black, and E.T.

In addition, the developers have also allocated LOTS of space to worldbuilding. Many of the NPC interactions you can experience within the protagonists' flashbacks help you construct a more substantial idea of their worldview, opinions on the Deimos situation, and even their hobbies. 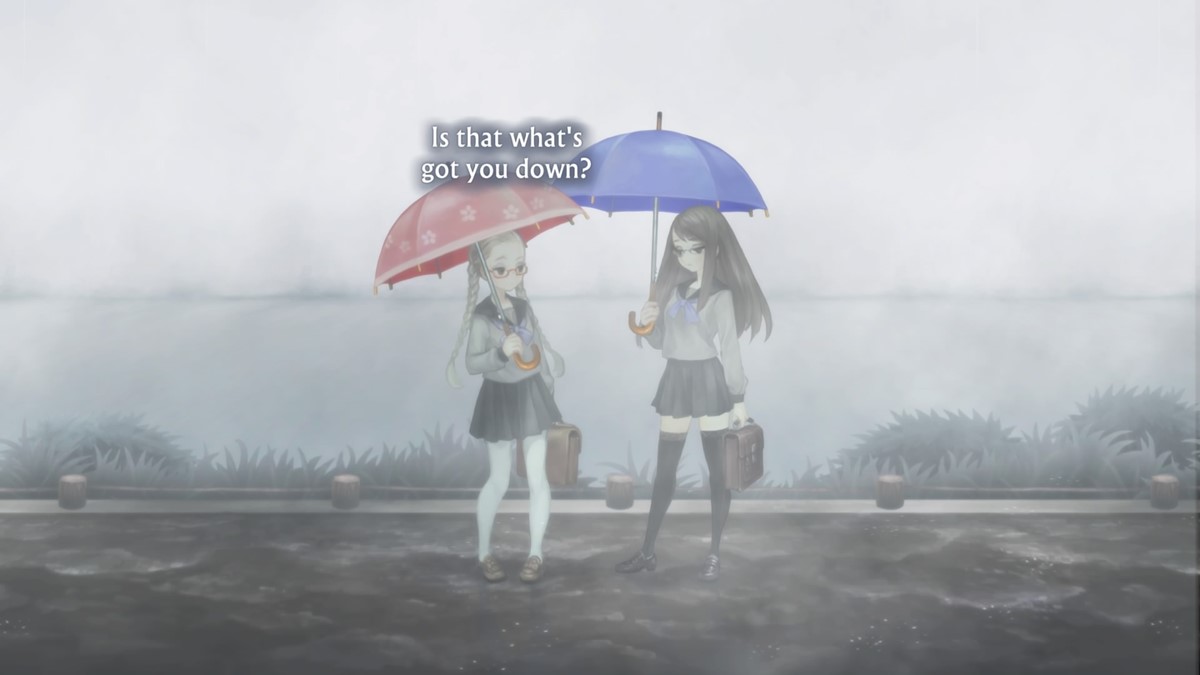 For example, you'll be able to discover how Juro Kurabe (one of the protagonists) is a die-hard otaku obsessed with alien shows, while another - Megumi Yakushiji appears to be a cold and calculating girl but is actually a hopeless romantic.

Of course, such interactions are also available to the eleven other protagonists, and naturally, all of their different inclinations play into the larger narrative, which I find beautifully dynamic because it keeps you guessing who's truly right or wrong. Admittedly, the variety does happen to be a double-edged sword here, as it also introduces concerns about how the game might have "too many cooks", as they say. Most visual novels I've seen tend to cap out at five different protagonists or thereabout, so it's only fair that people might second-guess a game with no less than thirteen of them. However, nobody said you had to love ALL of them now, did they?

With that in mind, I think it's perfectly fine if you end up liking a few, or even just one protagonist. Part of the beauty of visual novels, and by extension, any good narrative is in how you, and you alone get to decide who you like, and nobody can tell you differently. As for the RTS sections, the presentation here is like a cross between Advance Wars and Galaga - it's fancy yet old-school at the same time. Units are presented as holographic icons on the interface, with the player given a bird's eye view of the situation at all times. It's simple, but elegant as far as aesthetics go, with a couple of explosions here, a bunch of lasers there and a few sound effects to add some kick. Frankly, I think my only gripe with the game's entire aesthetics package is well, its relative lack of mecha per se - it would be nice to actually see the mecha firing rockets or punching Deimos units into oblivion rather than merely supervising a collection of fancy arrows on-screen. Speaking of gripes, remember how I said being "unique" doesn't automatically make you a great game? Well, I'm not saying that 13 Sentinels isn't great but there are a number of potholes that keeps it from being truly exceptional despite having a dynamic narrative, and the biggest of these flaws is arguably how the game itself is executed.

As noted above, you're provided with bite-sized RTS encounters at the start of each chapter, following which you'll delve deeper into the different protagonists' experiences. It sounds pretty okay on paper, but in practice, this jump from RTS to visual novel and back again can feel quite jarring and abrupt, preventing you as the player from ever really "getting into the mood" of either. 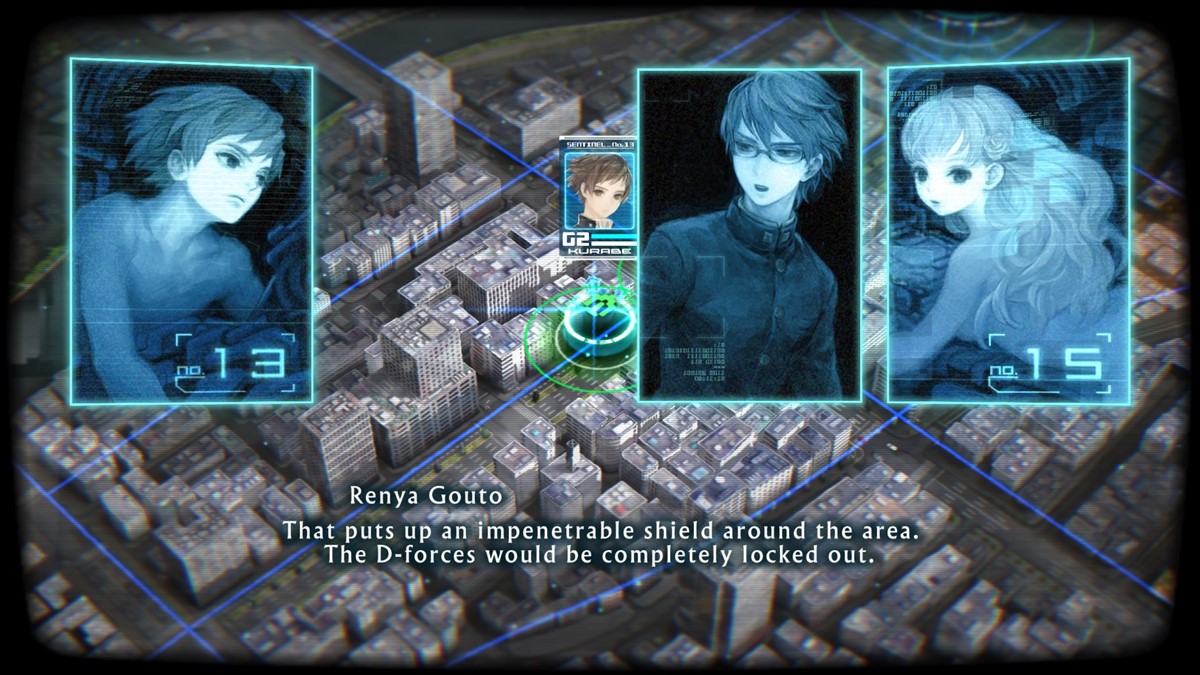 Plus, it also doesn't help that Vanillaware didn't really flesh out the gameplay segments that much. Most of the combat encounters can be cleared with just a tiny bit of brainpower, while the visual novel bits (outside of its worldbuilding exposition) are relatively hollow. To be fair, I don't expect to be dazzled at every single turn, but for the most part, you're just clicking anything on the screen that says you can interact with it - there's no puzzle-solving or decision-making that really affects the narrative. You just go with the flow, take the story as it is and top it off with the same ending each time.

In other words, for all the beauty of its narrative, 13 Sentinels fares poorly in terms of practical execution. Among other issues, it lacks the versatility that other modern visual novels have, and once you finish the game and see the ending, it's pretty much a one-and-done deal. 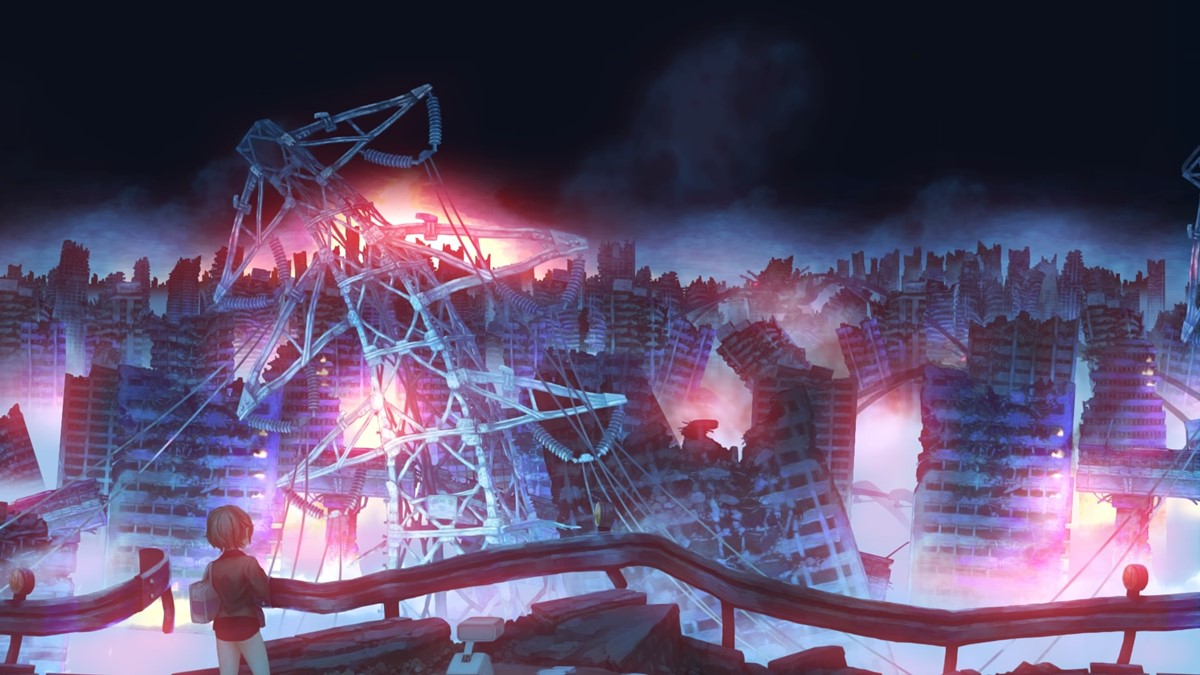 Now, I don't usually like ending off on a sour note unless I absolutely have to, so for what it's worth, I still think that 13 Sentinels: Aegis Rim is a game that's worth enjoying simply for its narrative. It can be somewhat tedious not having much to do during the visual novel segments, but I admit I did enjoy the RTS segments a fair bit. Sure, you might not have to apply as much of your tactical acumen as you thought you might, but it is entertaining to just bash Deimos and fire powerful lasers for the sake of doing so.

After all, that's partly why I classified the game primarily as a visual novel in the first place, and despite my reservations at how Vanillaware executed the practical aspects of gameplay, nobody comes into a visual novel for "spectacular gameplay" in the first place. With that in mind, I won't be faulting the developers too harshly for that, though it is also a pity I couldn't score the game higher because of it.

Yet, in spite of its practical flaws, this doesn't downplay the fact that the game has a truly thought-provoking narrative, a suite of interesting characters, and surprisingly expansive worldbuilding which, quite frankly, is much more than I can say for quite a number of titles these days. If anything, the one bit that the developers haven't skimped on is how neatly all thirteen individual narratives fall into place once you uncover the whole picture, and if that isn't a mark of excellent writing, I don't know what is.

Write a Review
Compare This | Specifications
Excellent writing and aesthetic presentation
RTS elements keep the game from feeling too dry
Surprisingly expansive worldbuilding
Frequent switching between combat and visual novel segments is quite jarring
Hollow and overly simplistic gameplay
Generally lacks replayability
Our articles may contain affiliate links. If you buy through these links, we may earn a small commission.
Sponsored Links