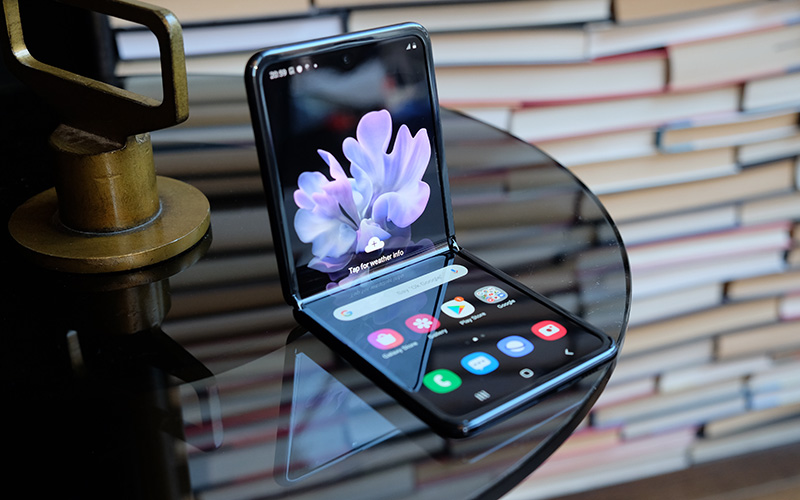 When fully unfolded, the Z Flip hosts a rather oblong-shaped 6.7-inch FHD+ resolution Dynamic AMOLED Infinity Flex display. It has a rather odd display ratio, at 21.9:9, which seems a tad more ‘ultrawide’ than the usual ultrawide definition. While suitable for anamorphic movie formats, it has rather amusing results for practically everything else, one being a seemingly very long web browsing view (a positive outcome), another being sides getting cropped when viewing Instagram Stories (which is not so great). 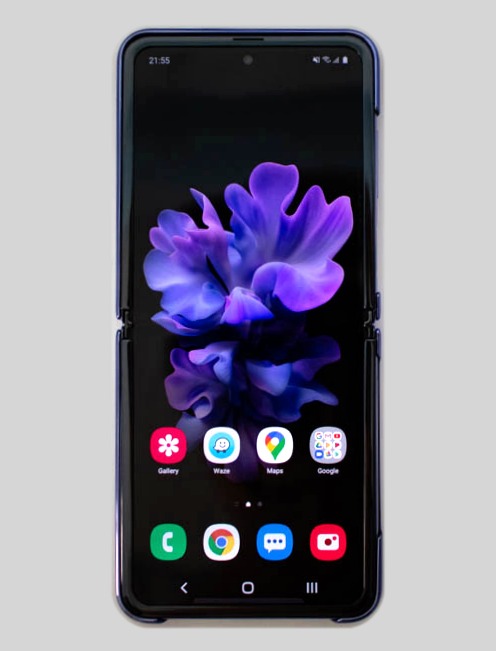 Despite that, its quirkiness does have its advantages such as viewing long emails or a long a grocery list, easily. Another being that the multi-window split-view actually looks better on an ultrawide screen.

One side effect of having a foldable screen is having a slight crease on the folding line of the screen. Whether it bothers the user or not depends on personal preferences and the ability to ignore it. For me, it is obvious, but I am able to ignore it for its other positive attributes this form factor accords me. 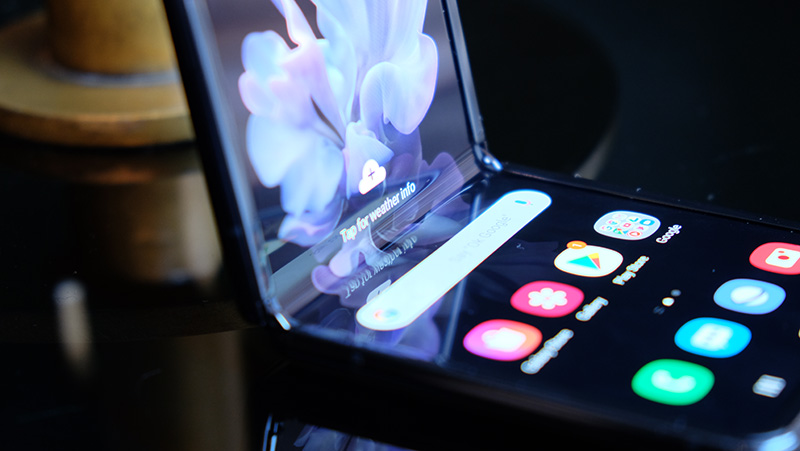 While the display, made of Ultra Thin Glass (UTG),  is proclaimed to be tougher than the display used on the Galaxy Fold, it still has some ways to go before achieving the toughness of a conventional mobile phone screen that many are accustomed to these days. On that note, I tried using one hand to flick open the Z Flip - using mainly my thumb. My nails were not long, neither were they just trimmed, yet it managed to leave a slight indentation on the screen.

With that painful lesson, I learnt that one must never attempt to pry open the Z Flip single-handedly; it is impossible without risking your thumbnail scratching the screen surface. However, once you have flipped open the phone, clasping it shut with one hand is possible, and it really does make for a very satisfying feel.

The Z Flip is obviously not waterproof in any way. This is expected, due to the hinge mechanism which allows for some tiny spaces on the phone and hence some degree of ‘porousness’. What is unexpected is the lack of a microSD storage expansion option, and that DeX mode is not available on the Z Flip. This is disappointing as there really isn't any technological limits inherent to the Z Flip preventing Samsung from incorporating DeX, even if it’s an assumption that the target group buying the phone won’t be needing it. 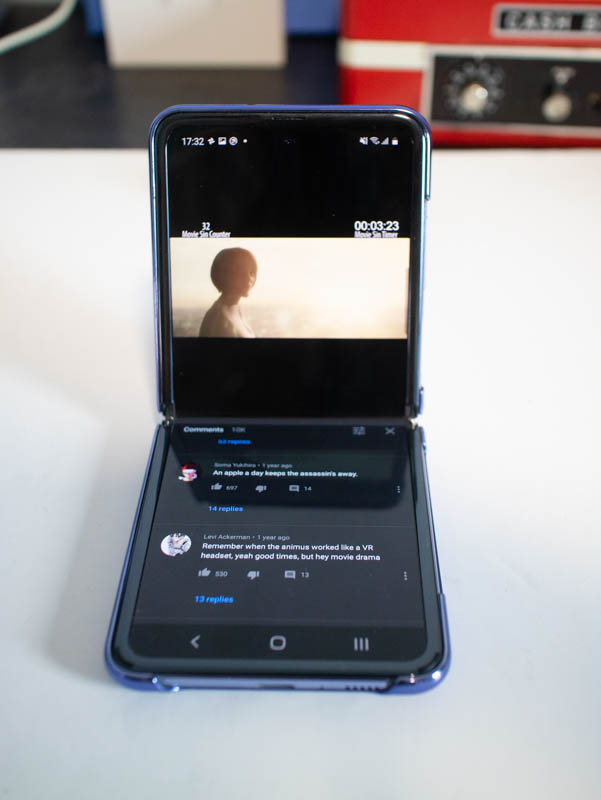 One major use for the Z Flip’s foldability is the ability for an app to host two contextually different actions within the same screen. In Youtube, for example, when the Z Flip is in free-standing form, you can view the video on the top half, while reading comments or looking for further recommendations at the bottom. Samsung brands this as ‘Flex Mode’, and is working closely with Google to bring Flex mode to their apps and eventually the concept to other phone manufacturers as well.

So far, there are not many apps supporting Flex Mode at the moment. Other than Youtube, Flex Mode is already implemented on Google Duo, which allows users to easily select AR emojis. Some stock Samsung apps, such as Camera and Gallery, support Flex Mode as well, but they offer little additional UI functionality other than to make the image viewer smaller, and the actions panel much bigger.

What really shines in this foldable form factor though is Flex Mode’s close counterpart: Multi-Active Window. Thanks to the Z Flip’s long-ish screen, it facilitates apps to still display a substantially sized view even in split view mode as compared to other Android phones. It is also useful for mobile video-conferencing: for instance, using a video call app on the top window while saving the bottom view for email or other productivity tasks (or even some entertainment). Plus the ability to lay the bottom half of the phone flat further facilitates the split-screen activity with ease. 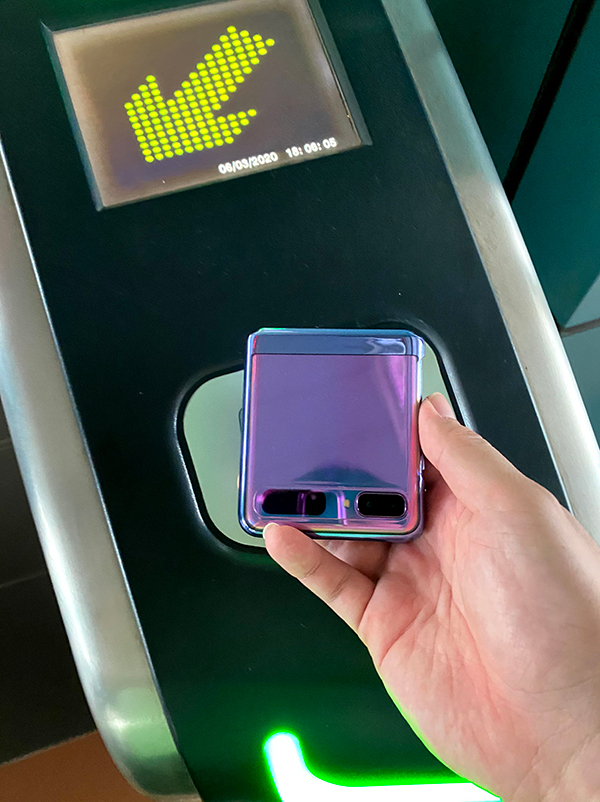 This should fall under the ‘cool’ category, but one can use the Z Flip to tap in and out without needing to flip the phone open. Samsung Pay incorporates SimplyGo, hence once that is activated, you can tap in and out of MRT gantries as well as the card readers on public buses effortlessly. It feels more secure and safe to be holding a ‘powder compact’ to tap onto the card reader instead of holding a full-fledged phone.

However, for regular purchases, you will still need to flip open the phone and activate Samsung Pay. The only way to continuously make regular purchases when the Z Flip is closed is, ironically, to switch to Google Pay.

It must be noted that the NFC module is actually nearer to the top at the bottom half of the foldable. This translates to it being slightly below the middle of the phone when unfolded. Thus, while making regular contactless payments, take note to position the phone appropriately as the phone may be too long for some POS terminals to capture the NFC signals properly.

A good number of wireless chargers are of the lie-flat design. This can be frustrating at times when you need to pick up the phone occasionally just to check notifications. Z Flip’s Flex Mode allows you to wireless charge the phone flat on the surface, while being able to see and interact with the screen at the same time.

Instead of jumping into the technical aspects of the Z Flip’s camera, let me first touch on the many new ways of taking photos on the Z Flip thanks to its foldable nature. 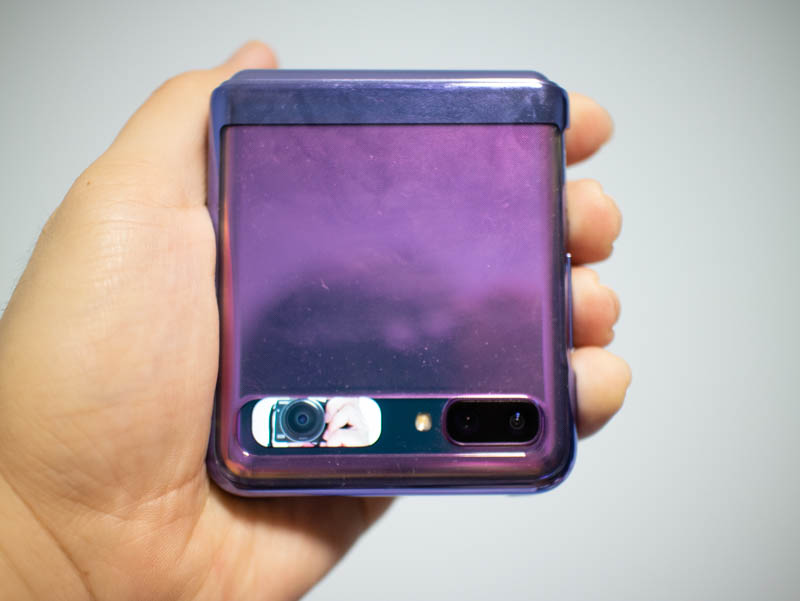 Normal selfie is kind of boring, with users having to contend with a relatively inferior front camera. With Z Flip, you can use the rear dual-camera to take a selfie, with the tiny front-facing Cover Screen acting as a quick viewfinder. While the phone is ‘clammed up’, you can just double-tap the power button to invoke the main rear camera, and then press the volume rocker button to snap. Alternatively, if you’ve enabled hand gestures to activate the camera shutter, you can use your other hand to wave at the camera and it will take a snap. This also lends itself nicely when taking a wefie shot. Here's a quick example of that in action:-

It might feel weird at first as the ‘viewfinder’ being a small rectangle, does not show the entire view, and you’ll have to rely on your face being within the ‘viewfinder’ to get a rough estimation that your face would appear somewhere within the center portion of the frame. Even then, the user still has to rely on some intuition and the reflective back of the Z Flip’s surface to gauge - again demonstrating why Mirror Purple and the new Mirror Gold finish is better than Mirror Black.

Photos taken with this mode are restricted to 1:1 aspect ratio, i.e. “Instagram ratio”. 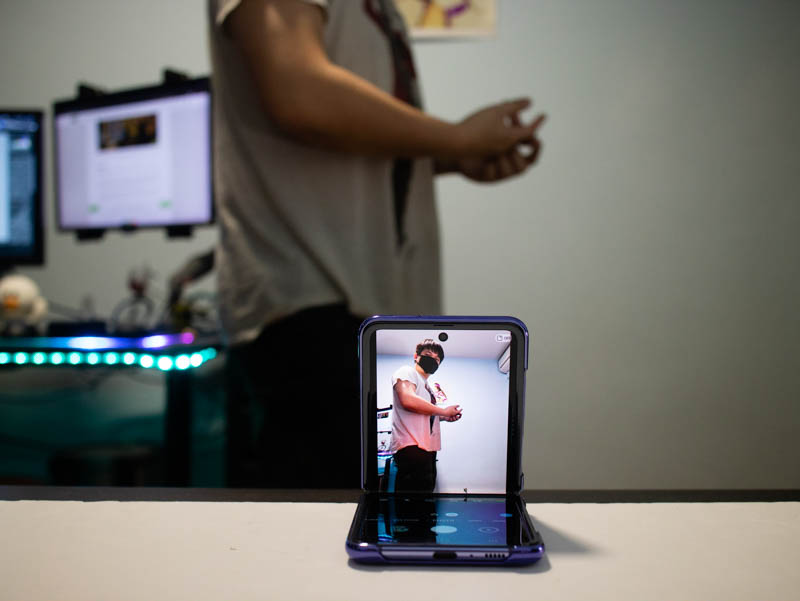 There are times where you will want to take a photo or record yourself in action, but you have to keep both hands free, say for example posing a proper and full OOTD (outfit of the day), or recording a vlog session. Yet, not everyone has a good mobile tripod, and even if you have one, you probably won't want to be lugging it around with you every day. What most will do is to find a backing surface to prop the phone against - and pray it does not fall flat and damage the glass screen. This is where the Z Flip’s foldability eliminates the hassle completely as it can prop itself. Just find a flat surface, open the Z Flip partially, and it becomes a standing phone on its own without further assistance. You can even activate the camera timer remotely by raising your palm. There is no way to remotely start a video recording though - at least not yet.