Having explored the novel ways of photography, let us look at the technical specifications of the Z Flip itself. Unlike other top-tier phones, the cameras on the Galaxy Z Flip are not creme-de-la-creme. At its back is a dual-camera system, both using 12MP sensors, one which is a standard wide-angle lens with OIS and the other has an ultra-wide-angle lens to help you nail a tight shot or landscapes at ease. It's not the triple-lens system that has been present since the Galaxy S10 series, but it's the same cameras used on that series (and the Galaxy Note10), minus the telephoto lens so no optical zoom.

The front-facing hole-punch camera on the main display is a rather ordinary 10MP camera with similar FOV as the rear camera's standard wide-angle. This underscores why the Z Flip's selfie mode is so useful - you can do an ultra-wide-angle selfie using the rear camera, which is most handy for wefies! Also, most selfie cameras don't quite match-up to the rear camera capabilities, and on the Z Flip, you can use the rear cameras to easily snap a selfie, which will fare a lot better than most phones in the market with traditional selfie cameras.

When comparing the quality of the primary dual-rear camera system against other rear-camera shooters, it is however not in the same playing field as the new Galaxy S20 series. At best it slightly surpasses my previous Galaxy S10, with the caveat of not having a third telephoto lens.

That is not to say the photo quality is shabby and is plenty decent for a regular high-end phone. Just don't expect the bells and whistles that come with newer flagships like its Galaxy S20 cousins. 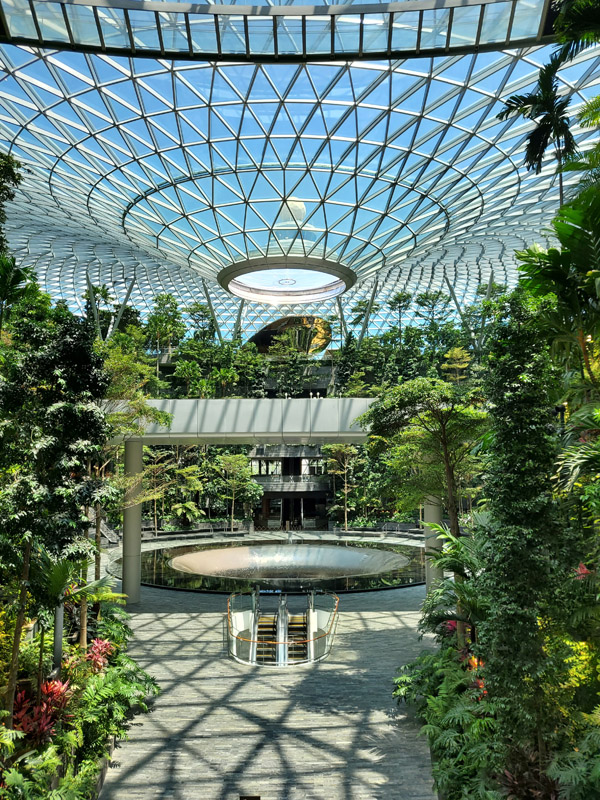 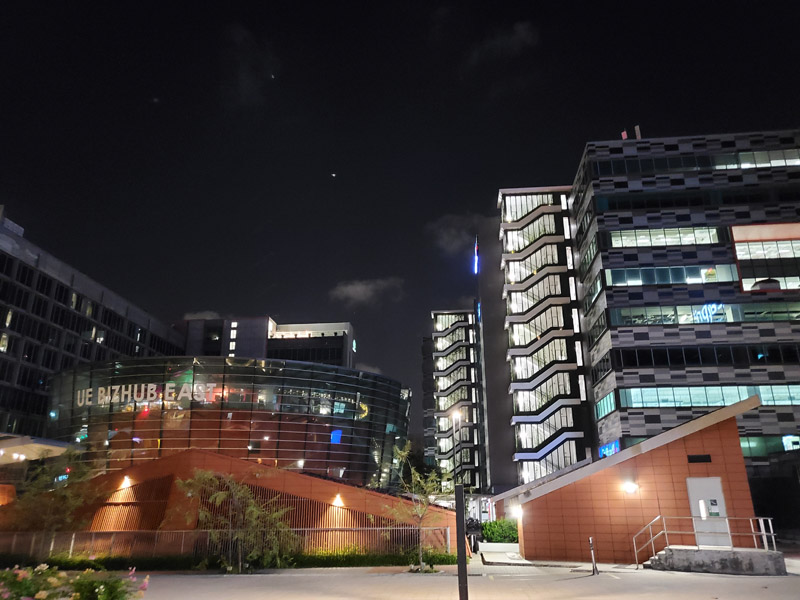 The Galaxy Z Flip is powered by a Snapdragon 855 Plus and comes with 8GB RAM. While it's not the same class as Qualcomm's latest Snapdragon 865, it's still a powerful high-end processor nevertheless and the best available in 2019. Now for those who've been following Samsung closely, you would know that they generally use Samsung's own Exynos processors for most models sold in this region. As such, their choice of using a single Snapdragon 855 Plus mobile chip for all international variants of this particular flagship phone is surprising. As such, how does it fare against other flagships, including its traditional Exynos cousins from the Galaxy S20 series? Here's what we found...

For web browsing, we use JetStream 2, which measures the browsing performance of a device when processing JavaScript. It takes into consideration the underlying hardware performance, favouring in particular browsers that start quickly, execute code well, and run smoothly.

For CPU performance, we go to Geekbench, a cross-platform processor benchmark that tests
both single-core and multi-core performance with workloads that simulate real-world usage.

Again, despite not sporting the latest Snapdragon flagship, it is still close to or surpasses its Exynos-based S20 cousins.

This is an all-round sub-system test benchmark where the CPU test evaluates both integer and floating-point performance; the GPU tests assess 2D and 3D performance, the memory test measures available memory bandwidth and latency, and the storage tests gauge the read and write speeds of a device's flash memory. In our test run, it seems that the Galaxy Z Flip has some ways to catch up to the S20, but it still put up a decent showing.

Not surprisingly, it fares somewhat below the Galaxy S20, but not too shabby either.

Samsung Z Flip packs a 3,300mAh battery, which is a little behind what's expected of new high-end Android phones these days, but the limitation is to be expected considering the phone's size and form factor. The reality of having a small battery is directly reflected in our battery life benchmark results too. With only 7 hours and 20 minutes of run time, it was well below the 569 minutes clocked by Galaxy S20 that packs a 4,000mAh battery. Perhaps the large screen does consume the battery faster. 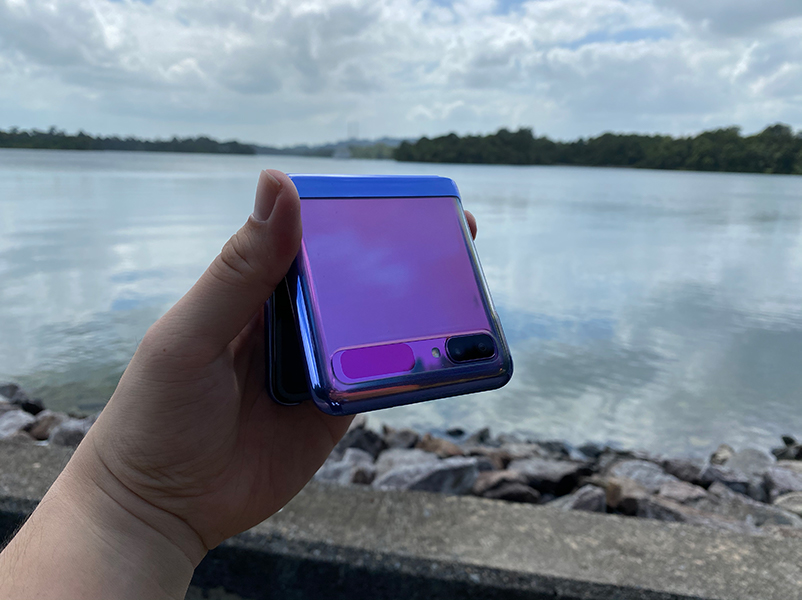 Before my Samsung Galaxy Z Flip ownership, I didn't have high expectations handling a foldable-screen phone as the idea of such a device just seemed too fragile. Leaping to embrace the classic flip-style phone of yore, I found the Galaxy Z Flip is actually a rather sturdy device that has withstood well with my casual handling - at least until I made a slight indent on the screen due to overconfidence (so don't try to open it single-handedly). Despite that encounter, I have never worried about handling the Z Flip outside of the house and putting it through its paces like any other phone.

It must be stressed, however, that this phone is not meant for people looking for flagship specs and over-the-top features even if it carries a big price tag. It has no DeX support, does not support expandable storage, does not use the best camera system Samsung has to offer, no big battery, no Wi-Fi 6 connectivity (only up to Wi-Fi 5) and does not sport the latest processor.

Fundamentally, the Galaxy Z Flip is about embracing its cool factor, being fashionable and just having fun, whereby simply using it - especially when clasping the phone shut - can turn heads. And I've experienced that first hand as some cashiers in supermarkets, and F&B outlets got curious about this phone. The foldable nature of this phone in a clamshell form factor made photography fun without having to fumble for tripods or standing surfaces to prop up the phone. Just unfold it to any angle you want, and it can snap away, hands-free.

The Samsung Galaxy Z Flip originally debuted with Mirror Black and Mirror Purple colourways​​​​​​. Recently, Samsung added a new Mirror Gold colourway and will be launching the Thom Browne Edition later in June, so the Galaxy Z Flip is undoubtedly here to stay. 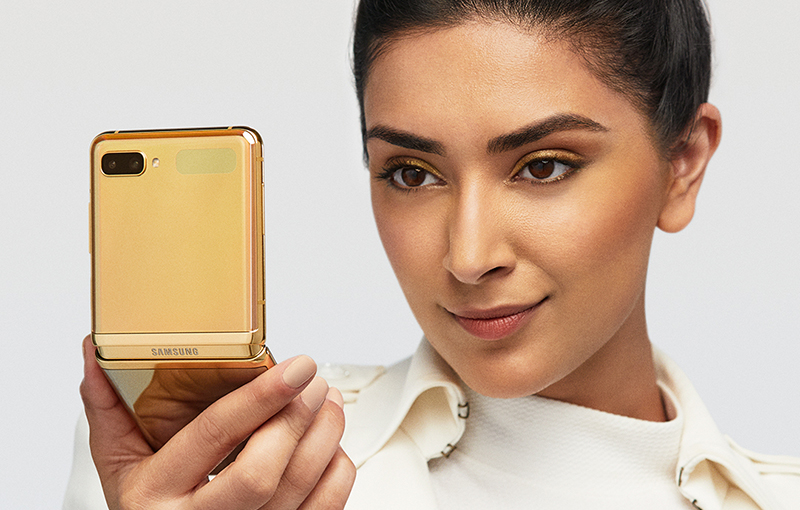 While it's a lot 'cheaper' than the Galaxy Fold, the Galaxy Z Flip's retail price of S$1,998 (that's two grand) is still a costly affair, and you would have to observe some handling etiquette to ensure it stays looking as good as you first bought it. Foldable phones are still in their early days, so their long-term reliability is still untested. At this point, after 100 days, my phone has kept up well to-date, and I expect it to continue for some time to come. Despite some of the concerns, if you've always wanted to go retro with clamshell-style phones, be the first mover in embracing cutting-edge technology and look cool while doing so, there's little else to keep you from making the jump - just like I did.