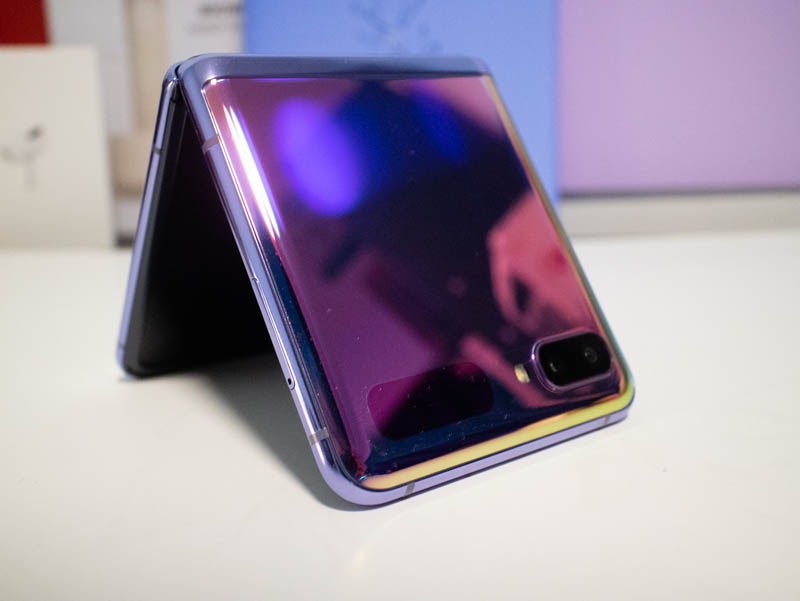 Samsung's first foldable phone, the Galaxy Fold, re-released late last year after a major redesign, proving that phones with foldable screens are much more complicated than envisioned. Only Samsung has the might and reach to test its ultra-high-end signature device to a wide enough audience and afford a re-work to see through what was once a prototype, into a real device anyone can choose to own. This year, alongside the traditional Galaxy S series line-up with the S20 troupe, Samsung also released another foldable phone, the Galaxy Z Flip.

While Fold's concept was a phone-to-tablet foldable, the Galaxy Z Flip takes on the old-school flip phone paradigm. Of course, it comes with a 'relatively lower' price too, though it does not come with the latest flagship specs. Given that, what is then the appeal for getting a Galaxy Z Flip in 2020?

As a gadget freak, I couldn't wait to find out and dashed to be an early adopter. Since many were concerned of the phone's durability over prolonged usage, here's what I found after 100 days with the Galaxy Z Flip as my daily driver, right after this quick video overview by my editor:- 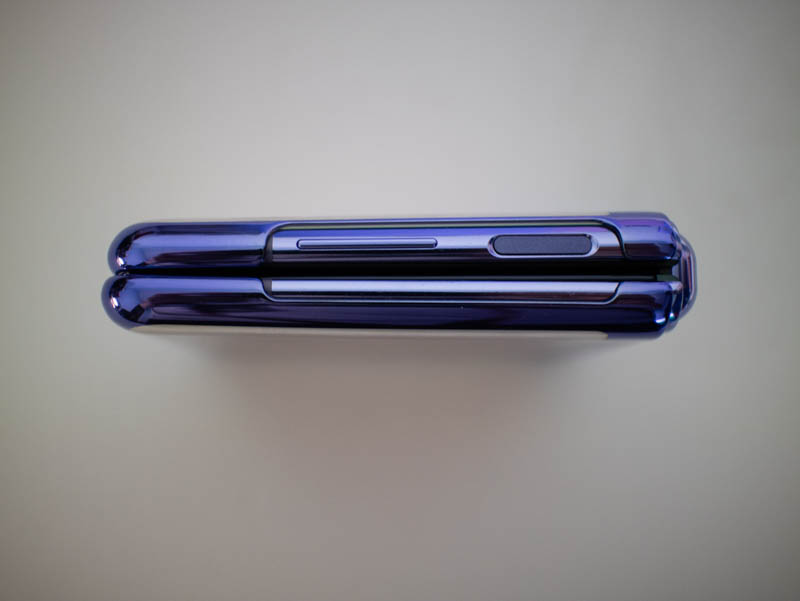 When the Z Flip is in 'standby mode', that is in folded form, it feels very snug in the palm (just 73.6 x 87.4mm folded), even if it is thick (17.3mm on the fattest side). In fact, it feels like holding a rather exquisite and large powder compact, just without powder, and the 'mirror' is the camera app. Here is where the choice of colour makes a lot of difference. It may not be apparent in photos, but the Mirror Purple finish is significantly more eye-catching than the Mirror Black. More recently, a striking Mirror Gold colourway was added to the colour options with more on the way. 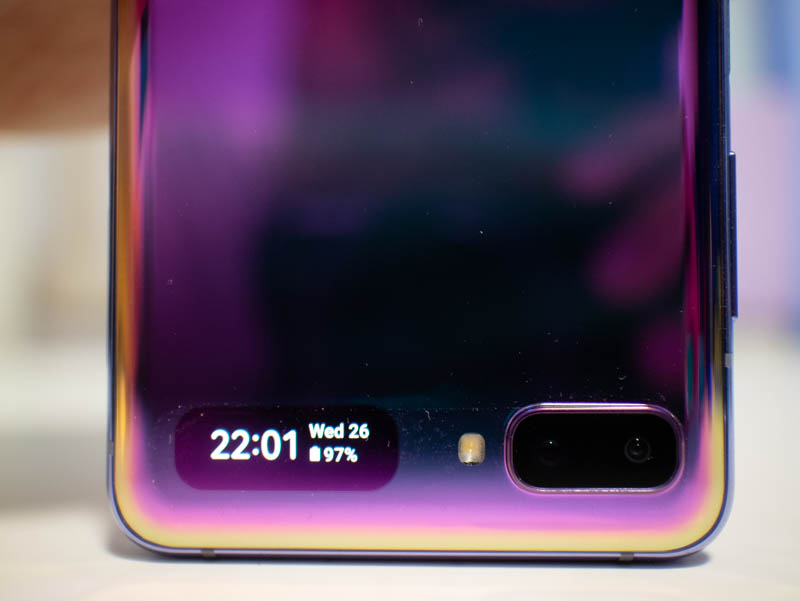 Its front is mostly empty real estate, save for a tiny 1.1-inch 300 x 112 pixels resolution Super AMOLED Cover Display on the bottom left, and a dual-camera module on the bottom right. The front display is so tiny that it can be mistaken for not being touch responsive, but users can actually interact with it, though with limited actions: Swipe to see notifications, and the text of notifications will come… scrolling past the small display.

Some may argue, why not just utilize the real estate for a larger, more useful display, like the new Motorola Razr? While it's a valid question, having a large reflective real estate makes the Galaxy Z Flip look classy and 'in vogue'; a person holding it will not just possess a tech product, but a product of fashion. 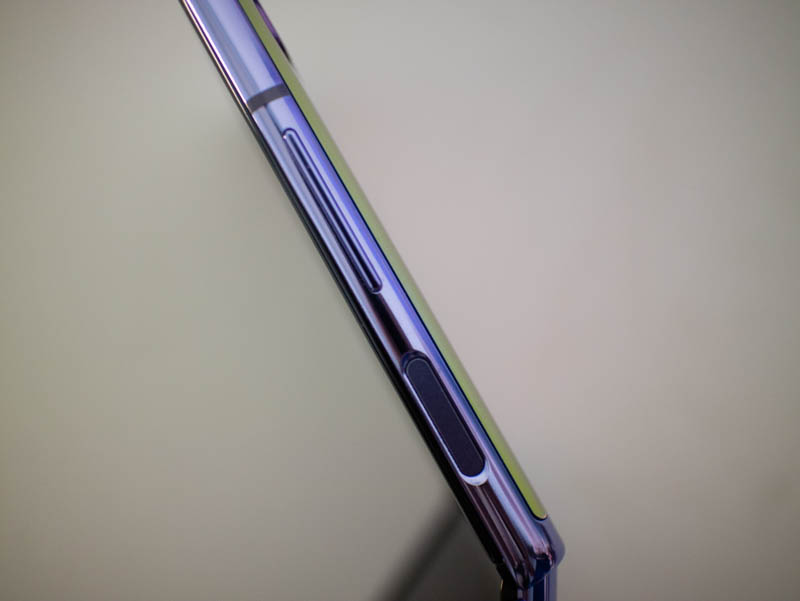 One interesting thing about Z Flip is that its fingerprint scanner is located on the power button (just like the Galaxy S10e). It may seem like a step back from Samsung's implementation of an in-display fingerprint scanner in newer devices, but ergonomically, it makes sense. After all, one will have to hold the sides of the phone to flip open the phone anyway, so having the fingerprint scanner on the side button makes ergonomic sense. Using a traditional fingerprint scanner also results in ultra-fast and reliable unlocking. This is especially useful when there is a frequent need these days to use biometric scanning to log into SingPass to facilitate entry into malls and supermarkets during this period where contact tracing is necessary. 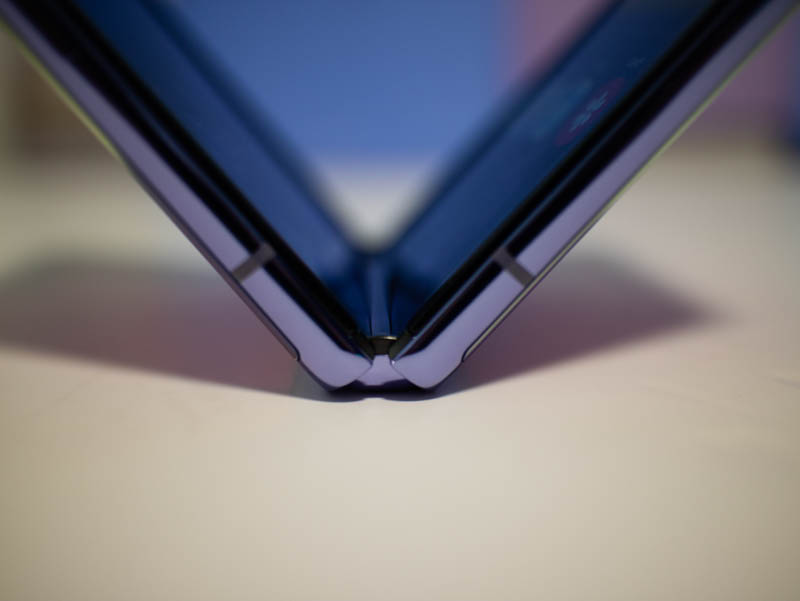 On the top of the folded Z Flip is Samsung's new hideaway hinge. According to Samsung, it is a redesigned hinge that strengthens the durability, allows the Z Flip to be held open at any angle you might require, and minimize dirt and dust going in between the hinges. Since I've never used its predecessor, the Galaxy Fold, I am unable to quantify the differences between the hinge improvements of these two devices. That said, I've been using the phone for more than a couple of months, and I must say I have little worry about the hinge despite heavy usage.

Write a Review
Compare This | Specifications
Stylish & Compact
Cool flip mechanism
Flex Mode usability
Hands-free photo taking
Powerful processing platform for a very compact device
No expandable storage
Low battery life for a flagship
Not using flagship camera module
No Wi-Fi 6 support
No DeX mode
Need to use it with some care
No water and dust resistance
Our articles may contain affiliate links. If you buy through these links, we may earn a small commission.
Sponsored Links