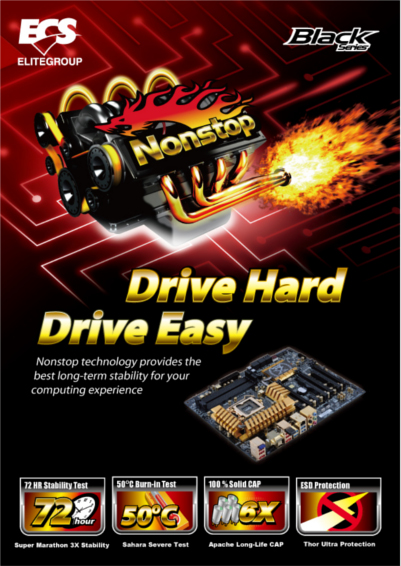 Designed to solve PC hardware problems before they occur, the Nonstop technology comprises four interlocking tests and enhancements which work together to protect PCs.

Every ECS Nonstop certified motherboard must survive the Super Marathon 3X Stability test, running through the testing cycle more than 30,000 times in the course of a strenuous 72-hour workout. On top of this, the motherboards also undergo the Sahara Severe Test, operating at 125% higher than the standard high temperature. Additionally, ECS Nonstop boards also include 100% solid Apache Long-life capacitors, to protect users from capacitor leakage and failure problems. These capacitors have a lifespan six times longer than traditional capacitors.

All ECS Black Series motherboards are Nonstop certified, including these models: