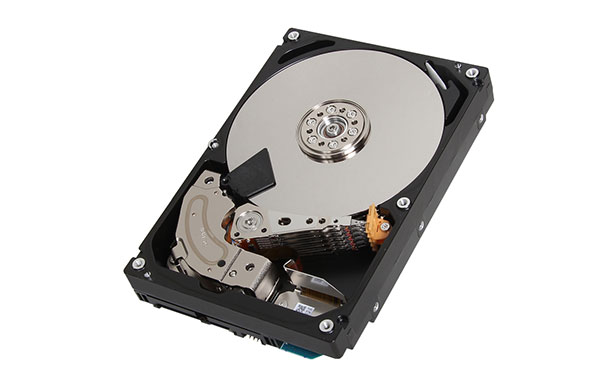 Image Source: Toshiba
SSDs may be getting faster and more affordable, but that doesn’t mean that progress on spinning drives has halted entirely. When it comes to high capacities in the terabyte range, mechanical drives are still the go-to technology for enterprise data storage. Looking to wrest more control of the 3.5-inch drive market for itself, Toshiba has announced the MC04 6TB enterprise drive, a more affordable version of its MG04 drive of the same capacity.
Instead of the 6TB MG04’s 12Gbit/s SAS interface, the newest addition to the MC04 series of drives will feature a 6Gbit/s SATA interface. It will still utilize the same 7,200rpm spindle speed, which makes it suitable for bulk storage and cloud-based applications that require less data transfer velocity and raw speed.
The 6TB MC04 drive is now Toshiba’s highest capacity enterprise cloud HDD – the highest capacity available previously was 5TB. This allows for more efficient high-density, high-growth storage for multi-petabyte rack deployments. The new drive is also claiming a 20% increase in power efficiency, measured in terms of TB/W, compared to older generations. This will allow enterprises to achieve more cost-effective delivery of cloud storage services.
In addition, the new drive utilizes a five-platter design and is rated for up to a 180TB workload a year.
6TB drives are nothing new – Toshiba already faces competition from the likes of Seagate and HGST – so the larger MC04 drive is a necessary step to remain competitive.
The 6TB MC04 drive is expected to begin sampling this August. It joins existing 2TB, 3TB, 4TB and 5TB drives in the MC04 family.
Source: Toshiba via Tom’s Hardware