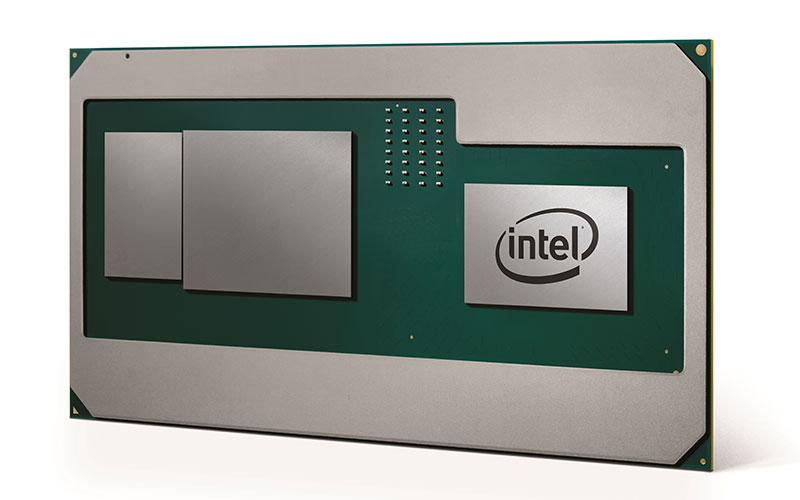 A 3D render of what the new processor module may look like. (Image Source: Intel)
Rival chipmakers AMD and Intel have teamed up to build an Intel Core processor with discrete Radeon graphics on the same package, with the intention of bringing a higher quality gaming experience to thin and light laptops.
We won’t even have to wait that long to see this, as Intel says that we’ll see the fruits of this partnership in its upcoming 8th-generation mobile processors. The current 8th-generation mobile chips on the market are 15W U-series parts used primarily in ultrabooks, featuring integrated GPUs that are part of the same piece of silicon as the CPU.
In comparison, existing H-series models like the Intel Core i7-7700HQ have a TDP of up to 45W and are found mainly in high-performance gaming laptops. Still, they’ve used more or less the same integrated GPUs as their U-series counterparts, as manufacturers tended to pair them with more powerful discrete GPUs.
That changes with the new 8th-generation processors, as the chip will now comprise multiple pieces of silicon. There are three components in total – the Intel CPU, a custom AMD Radeon GPU, and more intriguingly, second-generation High Bandwidth Memory (HBM2).
Intel calls this a System-in-Package module, and it’s underpinned by a technology that Intel has floated before in the past year.
The Embedded Multi-Die Interconnect Bridge (EMIB) is a high-speed, short-range interconnect that Intel first introduced as a way of linking different chips together in a single package and enabling new, heterogeneous architectures.
The new chips would be the first consumer parts to use EMIB, which was originally developed as an alternative to the silicon interposer. The latter sits on top of the package substrate and serves to link different die together, but because it needs to cover the entire area underneath the die modules, it can be costly to manufacture.
On the other hand, EMIB takes the form of small silicon bridges that are cheaper to make. These penetrate the package substrate and enable a greater degree of modularity, allowing Intel to mix and match different generations of chips using different process technologies.
As a result, the CPU, GPU, and HBM2 memory can be placed close together without sharing the same design. Compared to the circuit board traces used on traditional multi-chip packages, the silicon bridges also enable a higher density of interconnects. 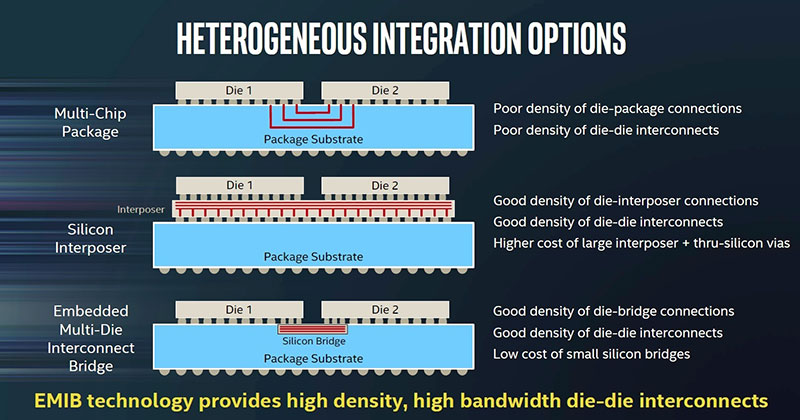 EMIB's silicon bridges are a more cost effective way of enabling multi-die solutions, while also allowing for a higher density of interconnects. (Image Source: Intel)
In addition, EMIB allows for faster and thinner packages, and Intel says the new module lets it cut out an impressive 1,900mm2 from a regular motherboard with the CPU, discrete GPU, and memory laid out beside each other.
This is great news for the next generation of laptops, and the EMIB layout reportedly requires just half of what is usually needed on a motherboard.

EMIB can enable significant space savings, according to Intel. (Image Source: Intel)
To help manage heat output, Intel has implemented a power sharing framework that comprises a new connection between the CPU, GPU, and memory. This dynamically balances power between the three components, based on things like workload and temperature.
Intel will also supply drivers for the Radeon GPU, although it isn’t writing the original code, and it says it’s working with AMD to provide optimized day one drivers for new games.
There’s still a lot of information we’re missing, such as the exact number of SKUs and finer details like architecture, clock speeds, and memory capacity. Intel says we can expect to learn more closer to the launch date, which is currently slated for Q1 2018.
What’s more, the new chips supposedly bring gaming-class graphics on the level of discrete GPUs to systems as thin as 16mm (or even less), so there’s quite a lot to get excited about. For now, this looks like it might also be a tier above AMD's own Ryzen mobile APUs, so AMD wouldn't be cannibalizing its own business.
Is this the start of a long-term rapprochement between bitter rivals? AMD is quick to say that this is Intel’s project – it was the one that approached AMD first – and that it’s just helping out with the execution.
There’s also no patent or IP licensing between the two, and Intel quashed talk that it is getting rid of its own integrated graphics development team.
Source: Intel