Image source: Intel
Our words. Intel isn't done with Alder Lake just yet. In its Intel Vision 2022 event, the company unveiled its 12th Gen Intel Core HX processors, designed for both mobile workstations and notebooks targeted towards enthusiast gamers.
The new HX processors will come in i5, i7 and i9 flavours, for a total of seven new CPUs. Notably, the upper echelon of the HX series, topped by the i9-12950HX, will come with 16 cores and 24 threads — eight P-Cores (Performance Cores) and eight E-cores (Efficient Cores) to be exact. This is more than the existing 14-core options from the H-series lineup, making the new HX class the very best option for laptops. This hybrid model of performance and efficiency cores debuted alongside Alder Lake (you can read about what exactly both types of cores focus on here), so it's no surprise to see them on HX processors as well. 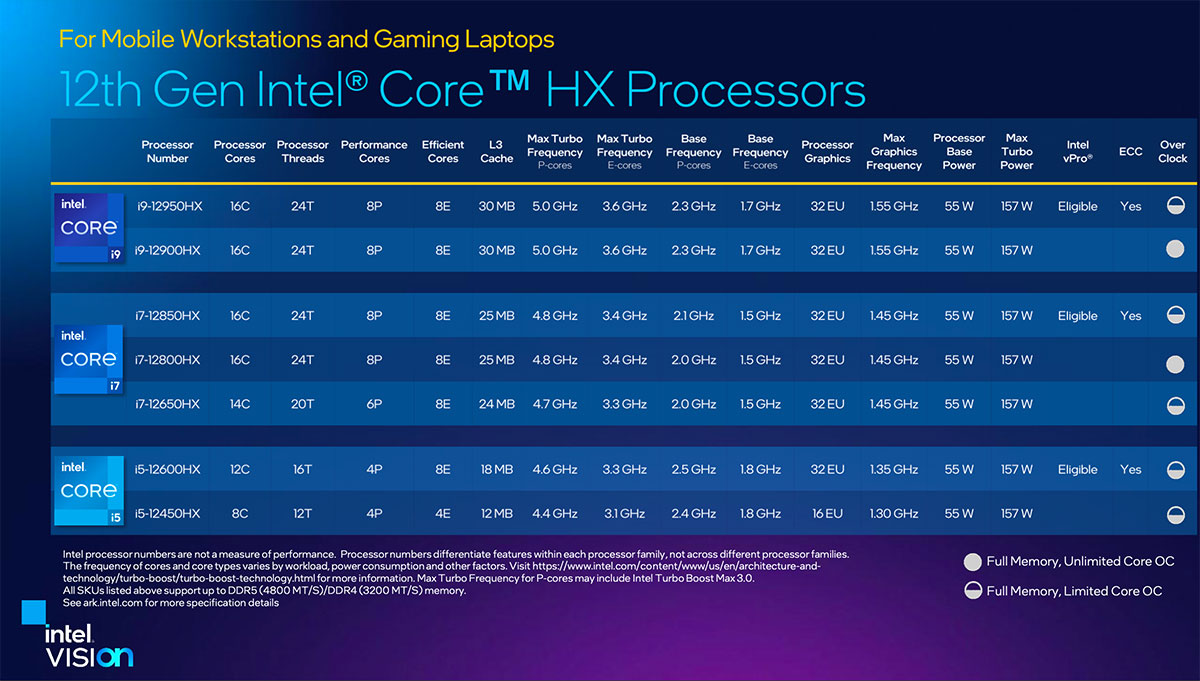 12th Gen HX series configurations. Click to view a larger image. (Image source: Intel)
Intel also noted that the HX processors will bring about the world's first 16-core notebooks. While, technically speaking, manufacturers have crammed 16-core desktop processors into laptop form factors before, such as with Ryzen desktop CPUs, the HX line does make it a little bit more practical (though a desktop Ryzen 3950X and mobile HX processor isn't exactly a fair comparison).
Meanwhile, the lower half of the HX series will make do with either 8, 12 or 14 cores. While Intel does note that other H-series processors do come with similar core configurations, the difference for someone considering H or HX CPUs will come down to data and I/O considerations, which is what the HX line focuses on. These data-oriented features include x16 PCIe Gen 5 with RAID support (along with x20 PCIe Gen 4), support for up to 128GB of DDR5-4800 and DDR4-3200 memory with ECC (on some SKUs), and up to two Thunderbolt controllers, all within a TDP of 55W (but able to be boosted to 157W via Intel Turbo Boost).
All HX processors are also unlocked for overclocking (at least to an extent), which is great news for gamers but no doubt also a challenge for notebook makers. (Editor's Note: How brands balance between overclocking and power throttling within the tight confines of a notebook chassis will be interesting).
As for tangible performance gains, using a Core i9-11980HK as a baseline and a Core i9-12950HX for comparison, Intel quoted about a 17% increase in single-thread performance and 64% in multi-thread performance, enough to match and even best a Core i9-12900HK. Performance gains in more practical use cases like professional apps will differ, but Intel also reports gains across the board. Whether it'll hit those gains remains to be seen, but these numbers are definitely nothing to scoff at. Single and multi-threaded benchmarks for the i9-12950HX. (Image source: Intel) 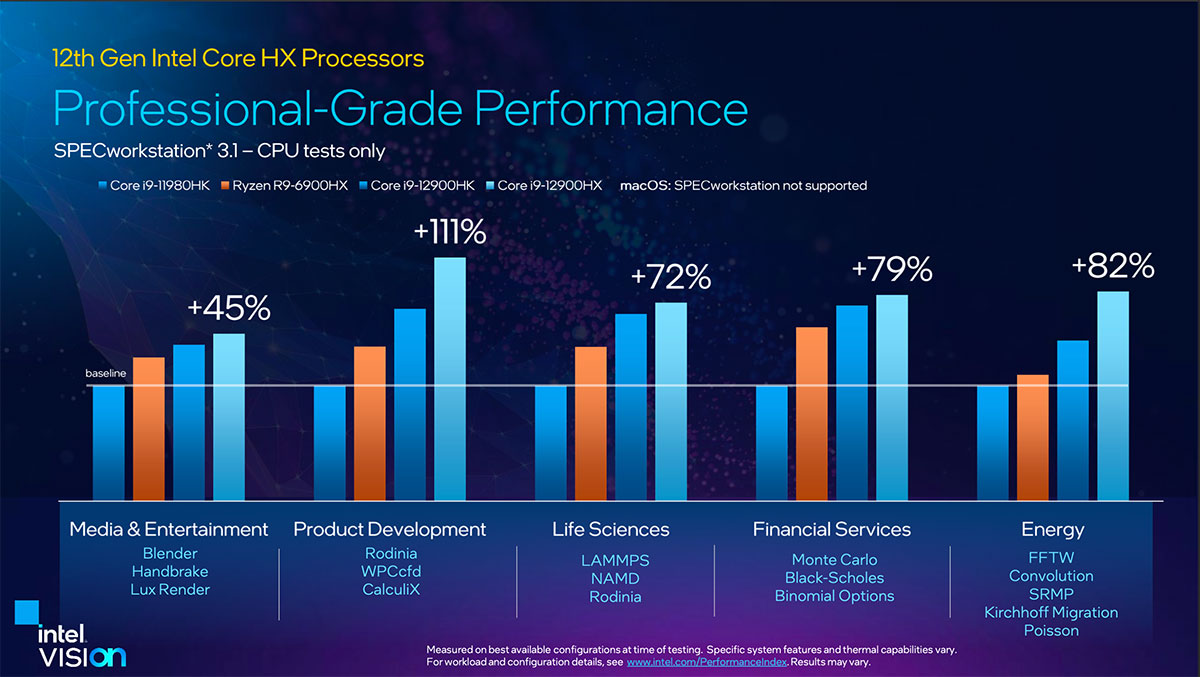 SPECworkstation benchmarks for the i9-12950HX. (Image source: Intel)
Finally, Intel expects more than 10 workstations and gaming notebooks powered by HX series processors to be launched over the year. Manufacturers include ASUS, Dell, Gigabyte, HP, Lenovo and MSI, with names such as the Lenovo Legion 7i, ROG Strix Scar 17 and Dell Precision 7670/7770 among the notebooks expected to come with 12th Gen HX CPUs.