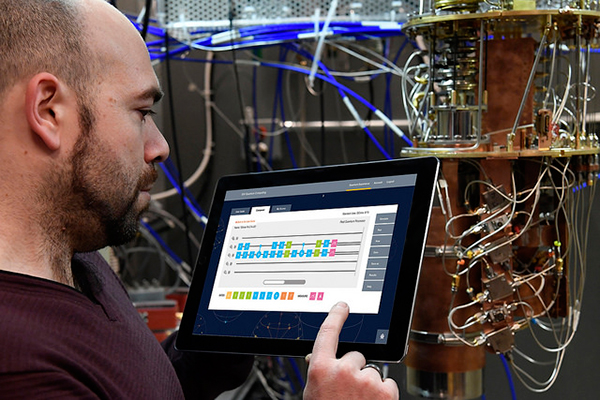 An IBM scientist demonstrates the use of IBM Quantum Experience on a tablet. (Image Source: IBM)
Quantum computing is a strange thing to understand. Situated at the boundary between computing and physics, it is a stark reimagining of how computers work that taps into quantum physics, or the branch of physics that deals with interactions between matter and energy. This is cutting-edge stuff, and IBM just unveiled a five-qubit quantum computer available to anyone via an online platform called IBM Quantum Experience.
This has wider implications beyond the excitement surrounding a potentially new approach to computing. Quantum computing has been posited as a possible way forward beyond Moore’s Law, which a growing number of voices in the semiconductor industry have said is coming to an end.
Moore’s Law describes the exponential improvements in the manufacturing process that have enabled everything from cloud computing data centers to increasingly powerful smartphones, but some believe Gordon Moore’s observation is breaking down already as chip components approach the size of atoms.
Truth be told, Intel’s struggles are ample proof of this. The chipmaker has delayed its shift to the 10nm process, and even recently announced the end to its longstanding tick-tock manufacturing cycle.
Enter quantum computing, which uses qubits (quantum bits) instead of regular bits (binary digits). While bits can only have a value of either 0 or 1 at any one time, qubits can be both 0, 1, or both values at the same time thanks to a quantum mechanics principle called “superpositioning”. Extrapolating from that, two qubits can then hold four values simultaneously – 00, 01, 10, and 11 – and adding more qubits would eventually result in a computer far more powerful than any supercomputer today.
Of course, IBM’s five-qubit quantum computer is still a long way from beating today’s supercomputers. But if it can improve at a similar pace to Moore’s Law, quantum computers could have thousands of qubits within the next 20 years.
These computers would be so powerful that they could break all of today’s public key encryptions, and even help in scientific discovery and research, such as the development of new drugs and materials. There are even implications for AI, as quantum computers could train deep neural networks far faster than existing arrays of GPUs and CPUs.
IBM’s quantum computer can be accessed through the IBM Cloud from any desktop or mobile device, and the company really wants people who need it to take advantage of the technology (just register here). By making quantum computing resources available to students and researchers, IBM also hopes to prepare them for what it thinks will be a future of quantum computers.
Source: IBM (1), (2)