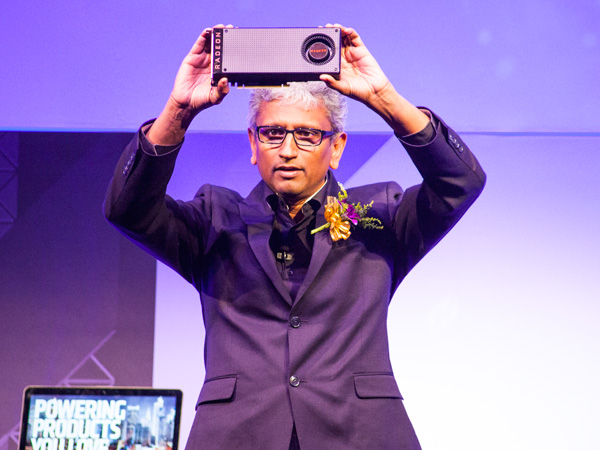 Raja Koduri, senior vice president and chief architect, Radeon Technologies Group, AMD, showing off the new Radeon RX 480 graphics card.
AMD has finally unveiled details of their much talked about Polaris GPU which will be the heart of the upcoming Radeon RX series of graphics cards. It might sound like a worthy challenger to NVIDIA's latest GeForce GTX 1080 but from the way AMD was positioning the product, it was more about reaching the masses and mainstream gamers. Citing how expensive a PC system can cost for VR gaming, AMD is determined to change all that by reducing the hardware investment required for gamers. This has led to the delivery of the latest Radeon RX 480 that promises to deliver premium VR experiences at just US$199 for the 4GB edition.
With an attractive price point of just US$199 for a graphics card capable of VR gaming, AMD hopes that it will drive the adoption of VR and at the same time, unleash the VR software ecosystem. It would undoubtedly help drive the price of VR headsets to a more affordable level at the same time. But being a mainstream card doesn't mean it's going to deliver pathetic performance. Comparing the specifications of the card released at the event with the previous generation, the new Radeon RX 480 is positioned between the R9 380 and R9 390X in terms of the number of TFLOPS it can deliver. However, the power required for the new Radeon RX 480 is astonishingly low at 150W, thanks to their latest 14nm FinFET process technology that has managed to reduce both leakage current and power consumption.
Tap to view table. 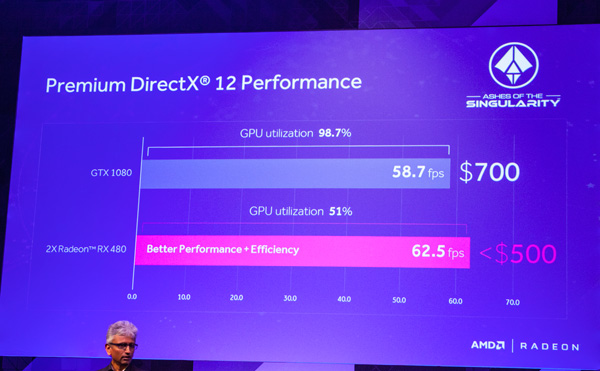 The new Radeon RX 480 in dual Crossfire configuration costing less than US$500 can outperform the NVIDIA GeForce GTX 1080 costing about US$700.
With the launch of the Radeon RX series, AMD hopes that it would be able to drive the VR technology adoption to a greater level while delivering VR gaming experiences to the next 100 million gamers in the next few years. Specifically targeting up to 84% of gamers who could only afford graphics cards costing between US$100-300, AMD intends to alter the gaming landscape through the Radeon RX series with improved performances and VR experiences at an affordable price point. 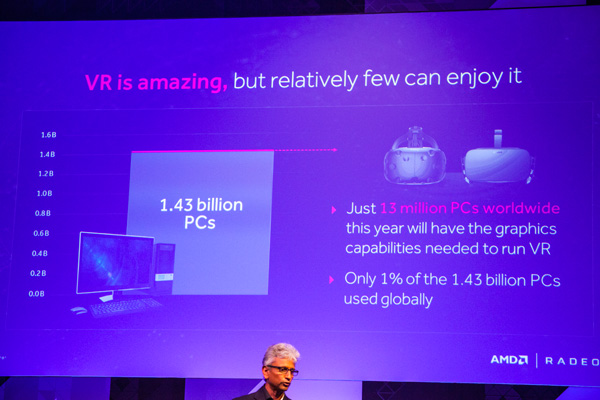 “VR is the most eagerly anticipated development in immersive computing ever, and is the realization of AMD’s Cinema 2.0 vision that predicted the convergence of cinematic visuals and interactivity back in 2008,” said Raja Koduri, senior vice president and chief architect, Radeon Technologies Group, AMD. “As we look to fully connect and immerse humanity through VR, cost remains the daylight between VR being the purview of the wealthy, and universal access for everyone. The Radeon™ RX Series is the disruptive technology that adds rocket fuel to the VR inflection point, turning it into a technology with transformational relevance to consumers.”
The new Radeon RX 480 will formally be launched on the 29 June 2016 with pricing for other configurations to be announced at that date. There would also be a model that is both HTC™ Vive Ready and Oculus™ Rift™ certified available at launch.