The RT-AC66U, how ever you look at it, is a spitting image of the RT-N66U. In fact, the gold ASUS logo brandished at the top right corner of the router is the only physical mark which sets them apart. Observably, the AC version carries the same crisscross patterns on the top of its hood as well, and they're only visible at the right lighting and angle. On that note, even the blue status indicators are identical with the N66U, with dedicated LEDs for each LAN port as well as the 2.4GHz and 5GHz wireless bands. The RT-AC66U is a stylish effort by ASUS on the whole, although we would have preferred it better without the unsightly antennas. A bundled bracket enables you to position the router in a semi-vertical fashion, otherwise, you may simply place the unit flat on the table or hang it up on the wall with nails or other mounts via the two "cross-holes" positioned behind the product. And apart from the customary installation disc, ASUS has thrown in a copy of Kaspersky's Anti-virus 2012 into the package too. The license is valid for one year.

The dual-band RT-AC66U is almost a carbon copy of its RT-N66U sibling, save for the gold-tinged ASUS logo located at the top right hand corner of the router. 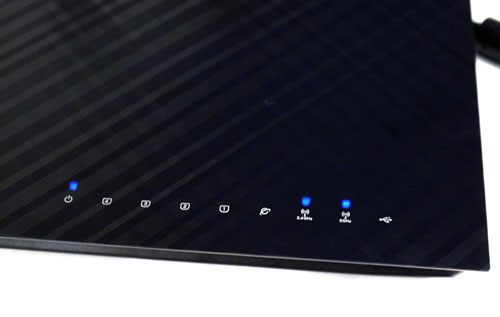 Even the blue status indicators are similar, with dedicated LED lights for both 2.4GHz and 5GHz wireless bands. The light goes off if that particular band is disabled. 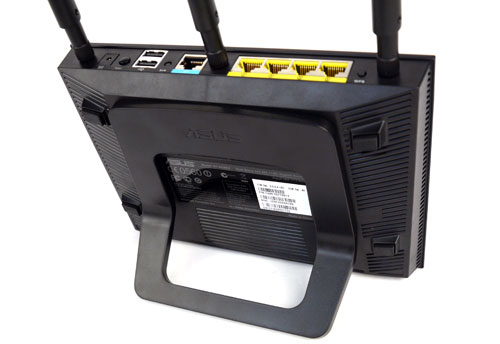 The router can be propped up in a semi-vertical fashion with the aid of an L-shaped bracket. Such a setup also makes it easier to access the router's IO ports. 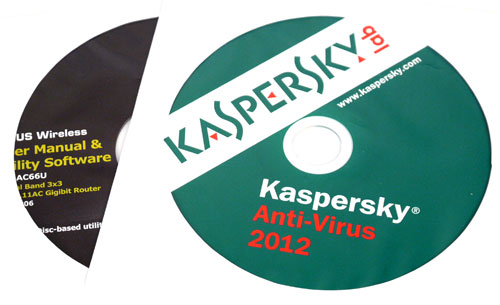 A copy of Kaspersky's Anti-Virus 2012 (valid for one-year), as well as a CD containing the user manual and utilities are bundled together with the RT-AC66U.
Yet again, the RT-N66U's back panel is almost identical to its N66U sibling. There are four Gigabit LAN ports (coded in yellow), a single Gigabit WAN (internet) port, two USB slots (with 3G support), and a DC power inlet. There are three buttons for the following functions: power, reset, and WPS (Wi-Fi Protected Setup). Likewise, the RT-AC66U comes with three detachable antennas similar to the RT-N66U. Although it's not a major concern, the ASUS RT-AC66U is probably the heaviest router we've handled. This can be attributed to the "high density" aluminum cooling fins, as mentioned on the previous page. Flip the router over, and you'd find a label indicting the firmware's version (3.0.0.4.140). For our tests, we've updated the firmware to 3.0.0.4.164 since a new version is available. On that note, do keep in mind that we're reviewing the router weeks ahead of its official launch, so it's best to check ASUS' site for updates after you've purchased the RT-AC66U. 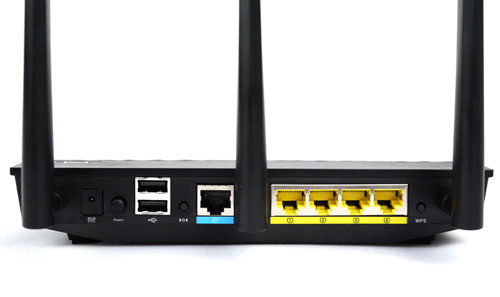 The Gigabit WAN port is coded in blue, while the four LAN ports are decked in yellow. This router is also equipped with a "3G backup mode" to be used in tandem with 3G USB adapters. 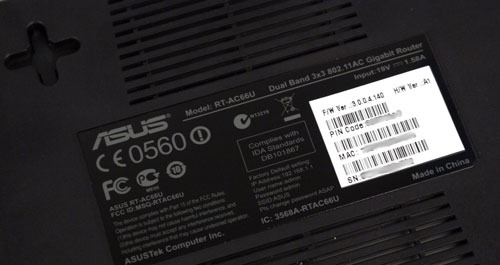 A label slapped beneath the router indicates its firmware version, PIN code, MAC address, and serial number. Ours was shipped with version 3.0.0.4.140.

We won't go through the basics of the ASUSWRT Dashboard again since it's a similar, albeit more comprehensive interface to what we've covered during our RT-N66U review. You may, however, read up our previous assessment. Now, let's assess some of the relatively new options. Upon first logging into the router's web interface via its default IP address (192.168.1.1), a "Quick Internet Setup" wizard would prompt you to configure various network settings, like the admin password and SSIDs for example. This mandatory feature wasn't available on the RT-N66U's firmware previously, and it'll take just a minute or two before the device is connected to the web. To bypass this wizard, enter "http://192.168.1.1/index.asp" into the URL field. The RT-AC66U continues to support various networking functions; namely as a router, access point, or media bridge mode. The latter enables you to connect multimedia devices to the RT-AC66U's Ethernet ports, as the unit acts as a wireless bridge to your home network. Interestingly, there's also an IPTV selection (found under the LAN setting) with the different ISP profiles such as Singtel's mio TV for instance. 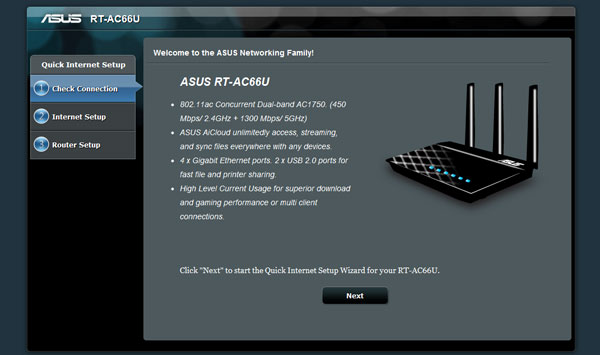 A default "Quick Internet Setup" splash page shows up if you're accessing the router via the web browser for the first time. To access its main user interface directly, try keying in "192.168.1.1/index.asp" into the browser's URL field. 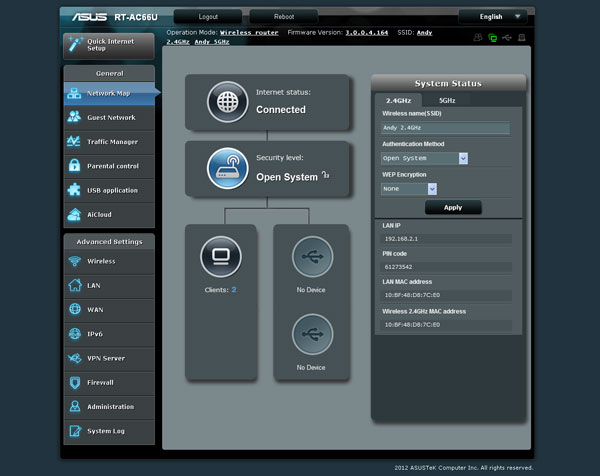 The latest ASUSWRT Dashboard looks very similar to the older version, although the main icons on the left are clad in blue instead of colored ones. The System Status column on the right enables you to make basic changes to both wireless bands on the fly. 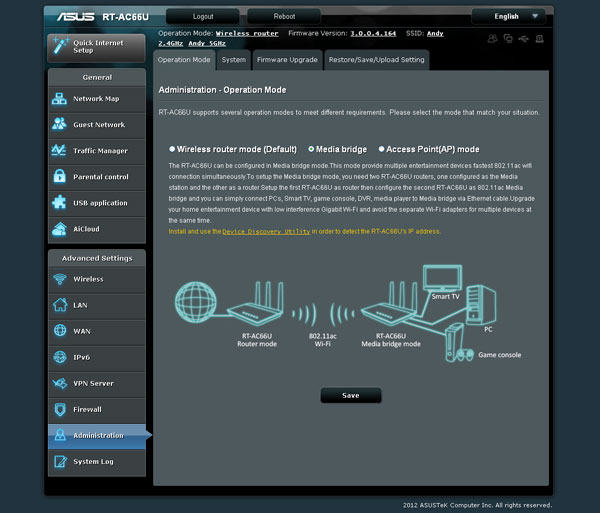 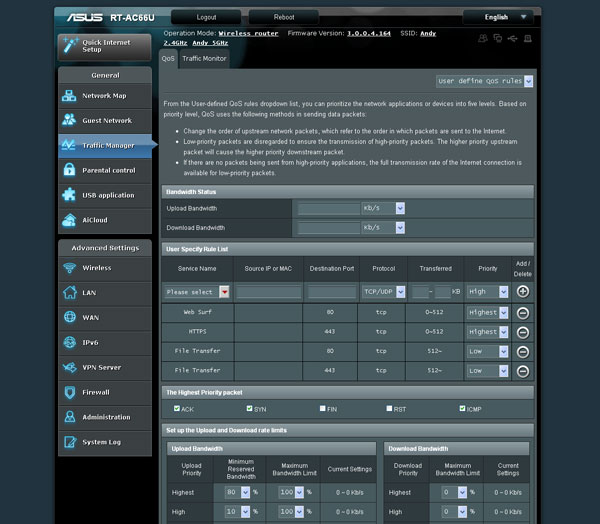 The user-defined QoS page should appeal to savvy users, where you get to fine-tune service rules and bandwidth settings in detail. 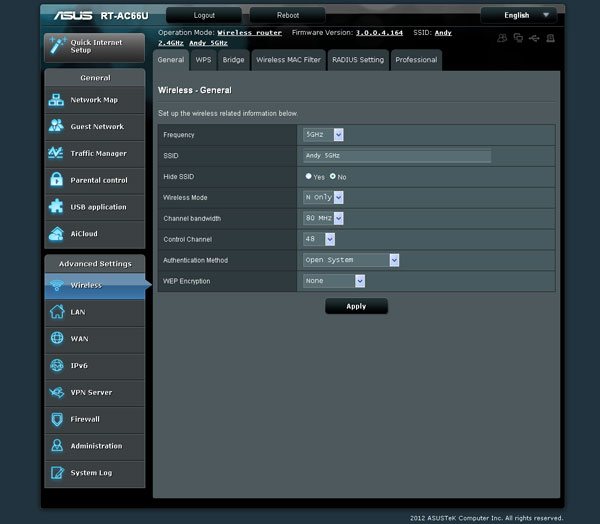 To enable the router's 802.11ac mode on the 5GHz band, head on down to the Wireless page and select the "80MHz" option under the Channel Bandwidth's drop-list.
The USB Application tab houses features such as AiDisk (file-sharing services on the cloud), print server, and 3G backup mode (uses your 3G USB adapter instead of the broadband modem). For AiDisk, there's also an option to create your own storage domain via ASUS' DDNS services, or you may choose to configure the FTP settings manually. Although we did not face any issues accessing our shared drive over our own local network, the application kept returning an "invalid IP address" error whenever we tried to create a unique storage domain name using ASUS' DDNS service. Also, we're unable to fiddle with the AiCloud mobile aspect as yet, since the mobile apps aren't available at this point in time. 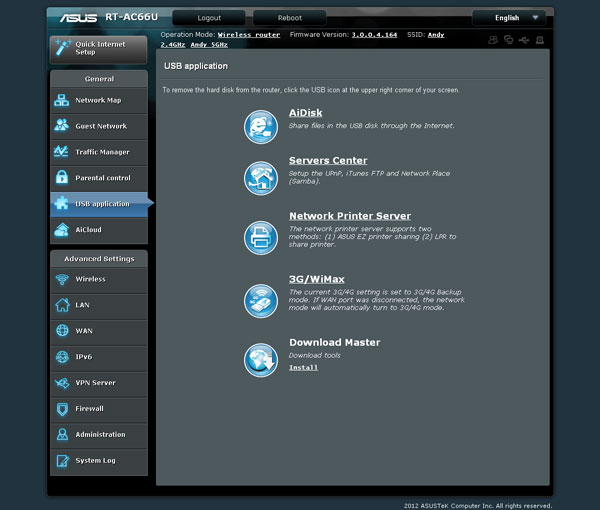 The USB application page houses all of the router's USB-based services, including AiDisk, Servers Center (you can tune the Samba and iTunes FTP settings here), Network Printer Server, 3G/WiMax, and Download Master.

The AiCloud option isn't accessible since the mobile apps for Android and iOS aren't available as yet. There is a disclaimer requesting users to follow ASUS on Facebook for more updates though.
Prev
Page 2 of 5
Next