This year’s International Sound & Sight Exhibition (ISSE) is happening from November 28 to 30, from 11am to 7pm each day, at the Parkroyal on Kitchener Road (next to City Square Mall). Yamaha Music (Asia) is at the show for the fifth year running, and this time, the company has brought along its latest audio-visual wares, from home theater receivers and Hi-Fi gear, to network players and desktop speakers.

HardwareZone was at ISSE earlier today, and there are some Yamaha audio and video products that caught our eye.

We’ve talked about our experience with Dolby Atmos at the cinemas in the past, and more recently, how AV brands are now bringing the ‘multi-dimensional’ surround sound tech to their home theater receivers. Yamaha is one of the first AV equipment makers to say that it’s going to support Dolby Atmos for the home, and the first two receivers to do that are the Aventage RX-A2040 & RX-A3040. 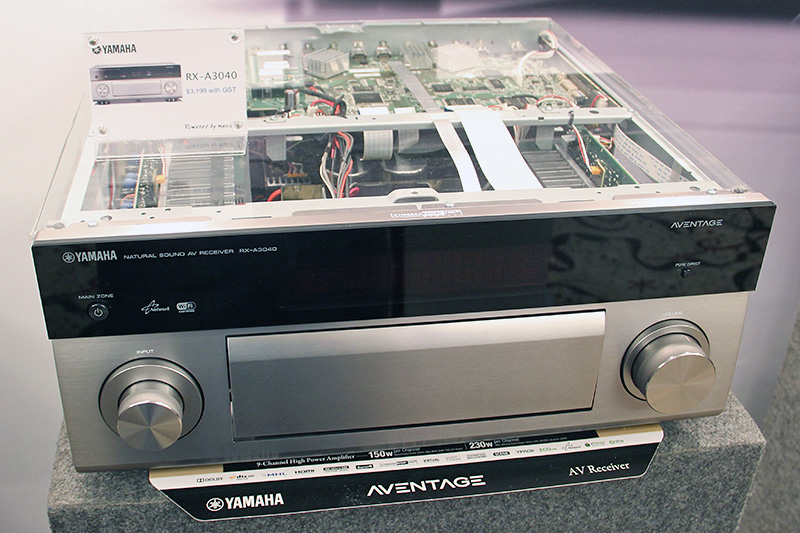 Versus the other receivers in the A40 series (e.g., the RX-A1040, A840, A740), the biggest differentiator these two higher-end models have is Dolby Atmos support. As we’ve mentioned before, to do Dolby Atmos right, the secret sauce is the overhead sound, which can be achieved using traditional ceiling speakers or upward-firing Dolby Atmos-enabled speakers (people in the AV circle call them the ‘height’ speakers). The latter basically projects the sounds upwards, and the waves are then reflected downwards to the listener after hitting the ceiling. Now, Yamaha doesn’t have Dolby Atmos-enabled speakers at the moment, so in its demo at ISSE, its 7.2.4-channel setup (the .4 represents the overhead speakers) used a combination of the company's Soavo series speakers and Q Acoustics’ in-ceiling speakers. 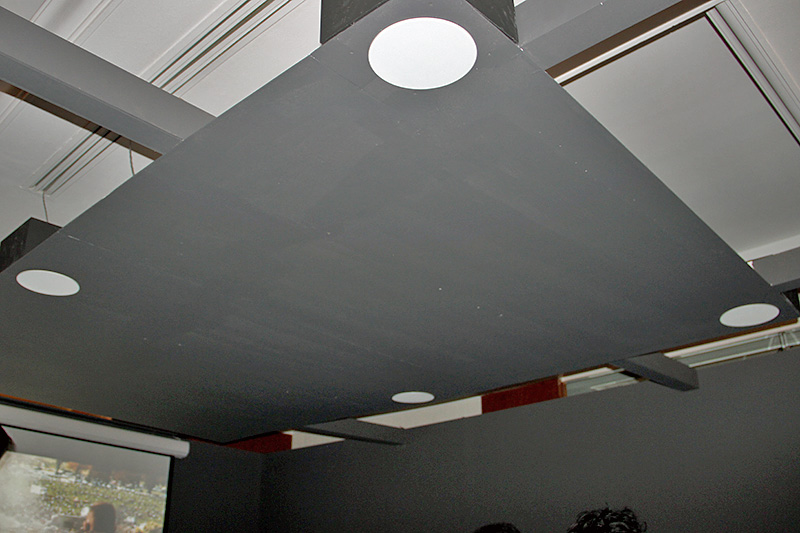 At this point of time, commercial showcase of the Dolby Atmos capability is pretty much constrained by the vastly limited movie titles with Dolby Atmos-encoded audio track rather than the hardware. Transformers: Age of Extinction movie is the first Blu-ray title to feature an Atmos soundtrack, with more titles coming from Paramount Pictures, Warners Bros., Lionsgate, and streaming service Vudu.

To showcase the Dolby Atmos experience, Yamaha treated us to a short segment within the Transformers movie where Lockdown's massive ship looms over Hong Kong and activates a really immense and powerful magnet that practically yanks anything and everything made of metal and wreaks havoc over the city. This is exactly where we experienced Dolby Atmos at its finest as the in-ceiling speakers helped to recreate a heightened sound field pertaining to reproducing the low rumbling audio of the giant magnet being activated overhead on Lockdown's ship.

Next, we re-evaluated this same scene without the ceiling speakers activated to feel how this segment would sound like without a Dolby Atmos-enabled setup. Theoretically speaking, a Dolby Atmos-encoded title with Dolby Atmos-enabled hardware can re-configure itself based on the available speaker channel configuration to help deliver the best audio experience possible. Even so, it cannot compensate for the loss of the ceiling speakers and we found the experience to be a little 'flat' as there was no height element to the audio and the giant magnet seemed to be activated from the ground and around you rather than above you.

In essence, we felt that this scene did no justice to the excellent Yamaha hardware as it really required the assistance of the overhead speakers to bring about the same experience that you would have had when viewing this movie in the cinema. Once you experience (a properly configured) Dolby Atmos, you just can't go back to standard surround sound.

In a nutshell, while there is very few compatible movie and music material available for consumers to experience this now, as with any new technology, it will take time to mature and be prevalent enough to be enjoyed all the time. If you want to experience this first hand, then come on down to ISSE and check the demonstrations at Yamaha's corner. 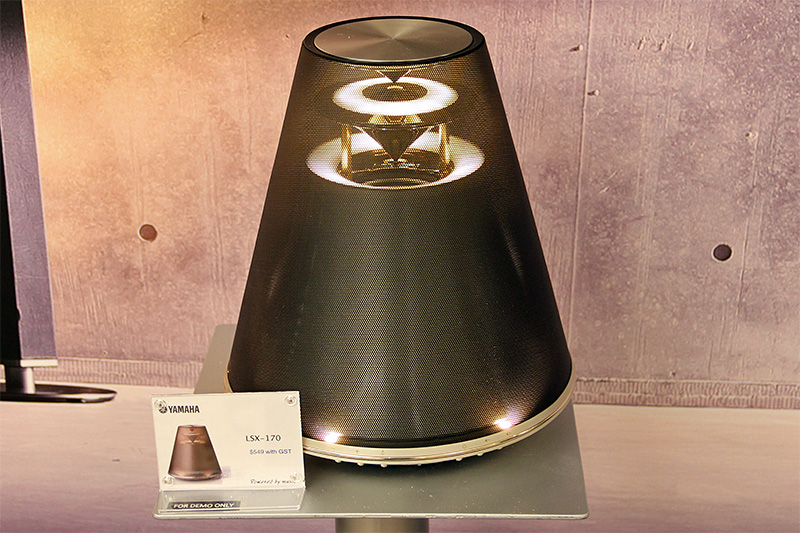 This cool-looking thing (does it remind you of Darth Vadar?) is the S$549 LSX-170, a desktop audio system that contains two speakers that point upwards. The main contributor to its attention-grabbing looks is this Sound & Light Reflector (an aluminum-coated tapered cone that’s polished to a mirror finish), which diffuses both the sound and light horizontally over a 360-degree range. With the Yamaha DTA Controller app (available on the iTunes App Store and Google Play store), you can remotely turn the lights on or off, set timers for both the audio and lights to come on, and of course, control music playback. 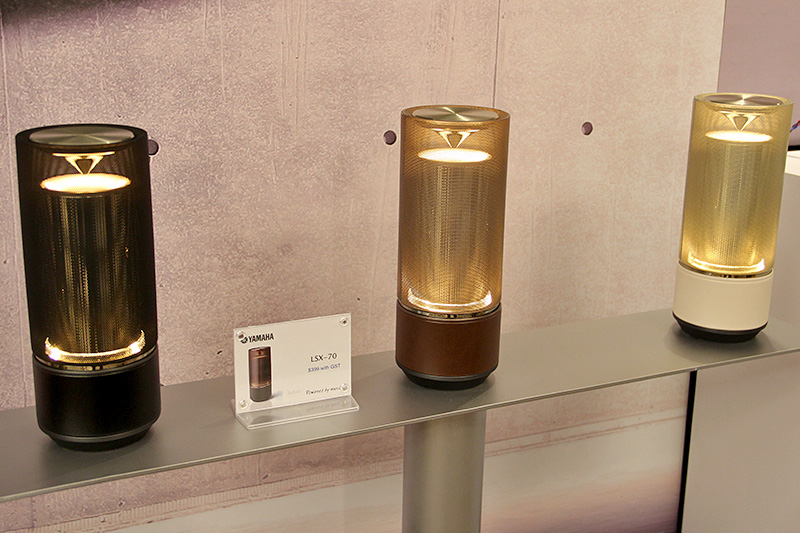 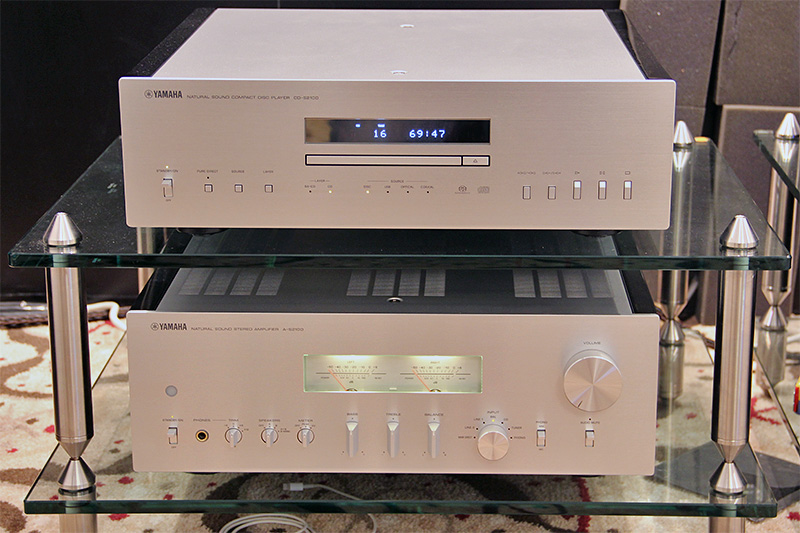 If you’re a fan of Yamaha's Hi-Fi products, you’d have heard of the company’s S3000 series of high-end Hi-Fi components. Immediately below the S3000 is the new S2100 series, which also consists of an integrated amp (A-S2100) and CD player (CD-S2100). Of course, the S2100 is still pretty much high-end stuff. For example, the A-S2100 sports an all-stage fully discrete construction, with a balanced transmission and low impedance design; a customized transformer that combines with four large capacity carbon sheath block capacitors; and a symmetrical design for the best possible stereo reproduction. The CD-S2100 Super Audio CD player also touts a left-right symmetrical construction, independent digital/analogue circuit configuration, and the highly acclaimed ES9016 Sabre32 DAC. As such, the S2100 series doesn’t come cheap: the A-S2100 amp costs S$3,299, while the CD-S2100 player costs S$2,999. 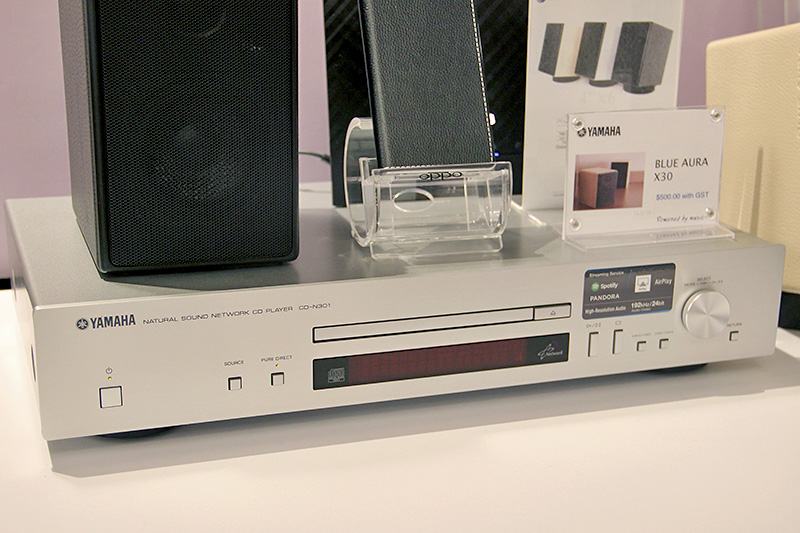 At S$639, the Yamaha CD-N301 is one of the more affordable network players out there. Sure, it plays CDs too, but we reckon most people buying it use it more for its network audio functions. The CD-N301 is compatible with Internet radio and a variety of music streaming services, including Spotify and Pandora. It’s Apple AirPlay-compatible too, which means it’s easy to playback music wirelessly from your Apple devices. Audio enthusiasts will also be happy to know that it supports 192kHz/24-bit formats (WAV and FLAC). Like most Yamaha products these days, there’s a first-party mobile app that works with the CD-N301. In this case, it’s the aptly named Network Player Controller app (available for both Android and iOS), which allows you to browse the music on your device for playback, see album art, change source, and adjust network settings.