Windows 8.1: What You Need to Know

Windows 8.1: What You Need to Know Almost a year ago, Microsoft released Windows 8 to the general public, a brand new Windows operating system with a new user interface replete with touch gestures, much improved cloud-connected services, a renewed focus on apps, and new security features. Credit to Microsoft, despite the continued criticism (mainly leveled at the tile-based Start screen and the confusion that is Windows RT), the company hasn’t changed course (much), and in a few hours’ time (to be precise: October 17, 7:00 pm in Singapore; October 18, 12 midnight in New Zealand), existing Windows 8/RT users will be getting the OS’ first major update - Windows 8.1 or Windows RT 8.1 - through the Windows Store. For those who’ve skipped the OS upgrade last year, retail copies will also be available in stores tomorrow.

Things to Take Note Before Updating/Upgrading

For those who've installed Windows 8.1 Preview, remember that while you can update the preview to the final version, all your apps (both desktop and Windows Store apps) need to be reinstalled (only your personal files survive). This isn't an issue for those who have stuck with Windows 8/RT; everything is transferred over.

For those on Windows 7, you'll also need to reinstall all your apps when you upgrade to Windows 8.1 (but personal files are preserved); and for Windows XP and Windows Vista users who have finally decided to take the plunge, you'll need the Windows 8.1 DVD (or somehow find a way to get the OS on a flash drive) to proceed with the installation. For the latter group, it's akin to a fresh install; none of your files or apps will be kept, so remember to backup your data first. 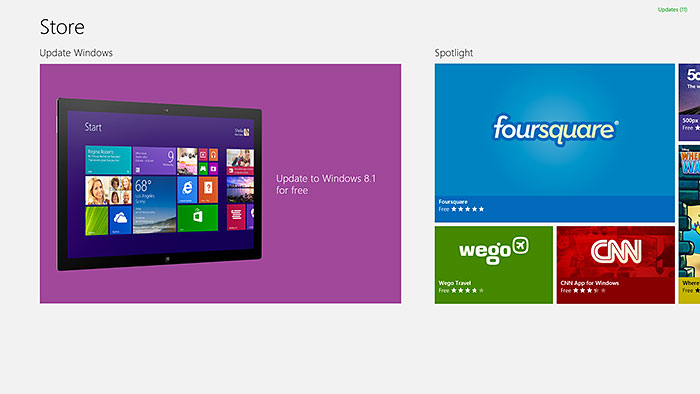 So, what’s changed in Windows 8.1? In short, Windows 8.1 aims to advance the Windows 8 vision, and brings support to devices sporting 7 to 10-inch screen sizes, along with smarter search, richer multi-tasking, and a more powerful and harmonious Start screen that sees the return of the Start button (though not the Start menu). Of course, the aforementioned is just the tip of the iceberg. There are also new personalization options, new built-in apps, a new version of Internet Explorer, and a vastly improved SkyDrive - just to name a few more.

If you haven’t been keeping up with HardwareZone’s Windows 8.1-related news and articles, right here’s the chance to do some catch-up reading. For a start, here are a few articles that detail the major additions and changes in the OS.

Of course, until Microsoft officially releases Windows 8.1, features may still change (case in point: the just announced photo and movie-making apps). For those looking for more reading, Microsoft's very own Windows Experience Blog is a good source to find out about the latest features in the OS.