Get Ready to be Metro-fied!

By now many of you would have seen Windows 8 in action from various news and articles or better yet, tried out Windows 8 Beta and more recently, the Windows 8 Release Preview.

Meanwhile for those of you who’ve not yet dabbled much with Windows 8, we’ve been busy gathering more updates on how Windows 8 and its ecosystem are shaping up at Microsoft's TechEd Europe 2012 in Amsterdam. There are countless improvements made to Windows 8 and a vast majority are related to seamless usage experience and intuitive usability via touch, mouse and keyboard in its modern Metro-styled user interface.

In this update, we share some of the top aspects that will matter most for typical power users who spend a considerable amount of time with your Windows based systems.

To prove this point, Bill Karagounis, who is Microsoft’s Windows 8 Principle Group Program Manager, used two identically configured Sandy Bridge based Ultrabooks and loaded each with Windows 7 and Windows 8 operating systems respectively.. Physical memory capacity on both systems was configured to be just 1GB to further prove the point of the new operating system’s general usability is more than adequate with its minimum recommended specifications (which hasn’t differed since Windows 7 and even Windows Vista).

After a fresh Windows boot, task managers from both systems were fired up and here’s what was found:-

Microsoft’s new Windows 8 operating system occupied 15% less memory footprint than Windows 7. This figure becomes even more considerable once you understand that anti-phishing technology and Windows Defender are part of the new operating system’s core right out of the box. As such, the delta of difference would have been greater if Windows 7 was loaded with equivalent software updates to boast the same functionality.

You might have heard of this feature for a while now, but do you know what does it actually do? Essentially, Microsoft has made Windows smarter in how it manages boot up and shutdown sequences in Windows 8 by marrying hibernation techniques.

So instead of closing all user sessions and Windows kernel core, services and devices from a traditional shutdown sequence, the Windows 8 shutdown sequence terminates the user sessions, but hibernates the kernel core. This would mean a much faster system initiation when powering up the system the next time round as it reads the hibernation file to restore the basic windows core and just reinitializes the drivers before loading the user sessions afresh. This gives Windows a very fast equivalent of a full system restart, and yet all the sessions are fresh as if it’s a true cold boot.

Karagounis further shared with us that the fast boot sequence only holds true if the system hasn’t had any core changes from the last shutdown, such as changes in hardware and drivers. Furthermore, it only executes the fast boot sequence for about a month (IT administrator configurable) before it attempts a true cold boot session just for diagnostic purposes, before resuming fast boot sequence in future system boot-up sessions. As such, Windows 8 is pretty smart in executing what matters most to users - delivering that speedy boot-up for quick usability.

For an system which doesn’t have any start-up user services and applications, Windows 8 is ready for use in 8 seconds or thereabout as demonstrated by Microsoft using a Sandy Bridge notebook with an SSD unit (your mileage may vary depending on your hardware).

With the Windows 8 core designed to be used on a multitude of devices, Karagounis mentioned that Windows 8 was designed to be an "Always-on, Always-connected" operating system, further reducing the need to start-up and shutdown the device. In fact, he further suggested the OS to be always running like a smartphone, and just waking up and sleeping depending if it has an activity or if it’s on idle. This is called "Connected Standby".

It is a concept that’s somewhat similar to what Intel initially started years back (and still delivers this at the CPU level) to utilize whatever necessary resources available to complete the task fast and get the processor to sleep state soonest. Connected standby however extends to controlling how the entire system/device is power managed and is yet able to be in the lowest possible power draw mode while still being in the ‘on’ state.

Karagounis shared with us that at this point of time, Connected Standby can only be implemented on system-on-chip (SoC) based devices. This is because of the tight integration of ‘components’ that allow the chip to better manage and control various system aspects rather than on the usual desktop/notebook that still use a multitude of processors. Of course the scale of performance for SoC bases devices and traditional 'Wintel' type notebook and desktop systems are very wide apart and serve different market segments.

As such Connected Standby feature will only be found on ARM-based devices (running Windows RT obviously) and Intel Clover Trail platform (a dual-core version of Medfield, which was showcased here) running the standard Windows 8 OS.

For a visual idea, Karagounis also demonstrated the Connected Standby feature using a reference NVIDIA Tegra 3 slate running Windows RT and hooked it up to a power meter:- 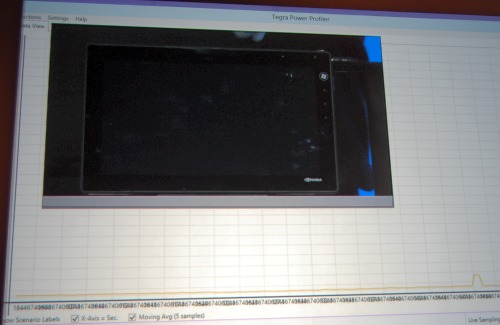 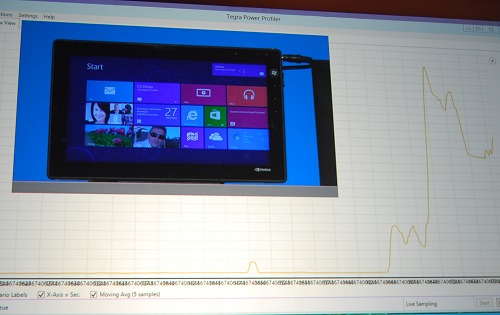 Following the ‘wake-up’ of the Tegra 3 tablet, soon enough, the screen turned off, resulting in massive savings in power consumption. This was followed by further power savings as things settled down and more processes were automatically put on standby, while unused portions of the SoC powered down.