Microsoft's pitch for a single OS for desktops and mobile devices like smartphones and tablets is simple: You can use whatever works best, whenever it works best. The same can be said for input methods. Surfing the Web in Internet Explorer 10? Nothing beats the direct interaction between your fingers and the touchscreen: you can swipe through pages, pinch to zoom into an image, tap a link to open it, or type a URL using the on-screen touch keyboard. Working with desktop apps like Excel or Photoshop? You'd probably be more productive with the traditional mouse and keyboard combination. Windows 8 makes it easy to use whichever method works best.

That said, after test-driving Windows 8 on a variety of devices, including desktops, laptops, and tablets, there's no doubt in our minds that the OS is best suited for touch, especially if you were to spend most of your time in the Start screen and Modern-style apps, where they're built to be wide and scrolled horizontally. Yes, a keyboard or mouse will still work, but the shortcuts and maneuvers are often tricky to pull off. Then again, it's not as if the touch gestures are obvious out of the box either.

In light of this little problem, we’ve compiled a few common Windows 8 Modern UI gestures and their mouse and keyboard equivalents below. We also take a closer look at a new multi-tasking feature called 'snap multi-tasking', and explore the various virtual keyboards built into the OS. *Note: This is only for switching between Modern-style apps. To include opened desktop apps, use Alt + Tab. 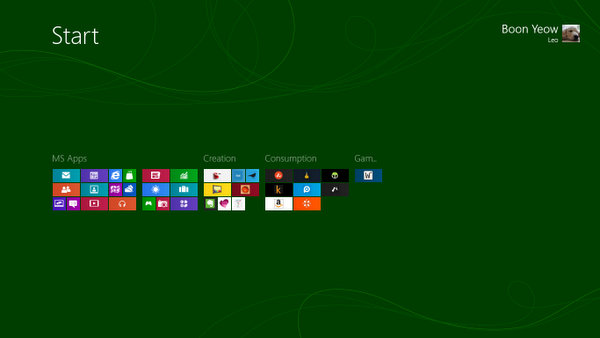 Naturally, this list isn't exhaustive. We've excluded a few of the more obvious generic touch gestures, such as tap to perform an action, slide to pan or scroll through lists and pages, pinch to zoom, and rotate to turn. If you've used a smartphone or tablet before, we believe these should come second nature to you when you’re using Windows 8 on a touch-enabled device. If infographics is your thing, check out this neat gestures infographics that we've found for the Release Preview of Windows 8.