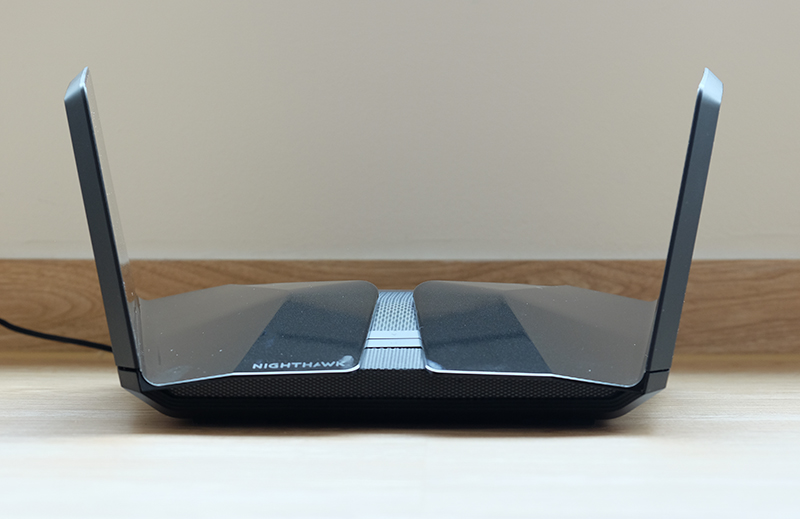 The Netgear Nighthawk Tri-band AX12 12-Stream Wi-Fi 6 router (RAX200) was one of the first Wi-Fi 6 routers to be commercially available and it’s easily the most refined looking. Sure, the two large antennae are a little outlandish but I’m sure you’ll agree its more restrained than the ASUS and TP-Link routers. To my eyes, it reminds me of the Imperial Shuttle from Star Wars. Like the ASUS ROG Rapture GT-AX11000, the Netgear Nighthawk RAX200 is a large and wide router. The antennae are also very prominent so you’ll need to make sure there’s space for it. 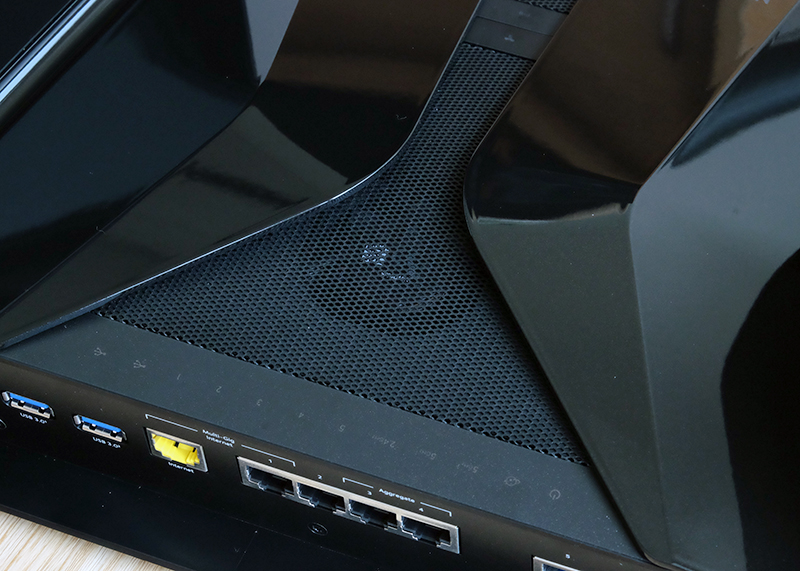 Looking around, there’s a strip of LED status indicators on the top of the router, which is handy for troubleshooting if your connection goes down. Also, peeking through the grille, one can also a fan. Fortunately, the fan is remarkably quiet and doesn’t draw attention to itself. There are also two buttons on the top panel – one turns the Wi-Fi radio on and off while the second is for WPS setups. 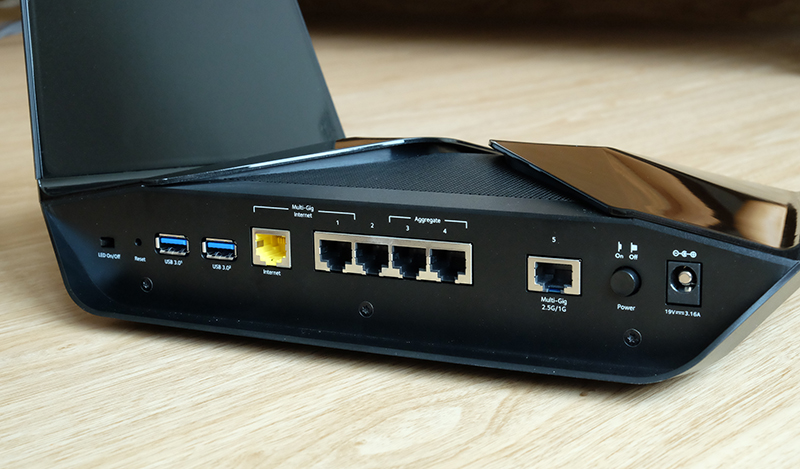 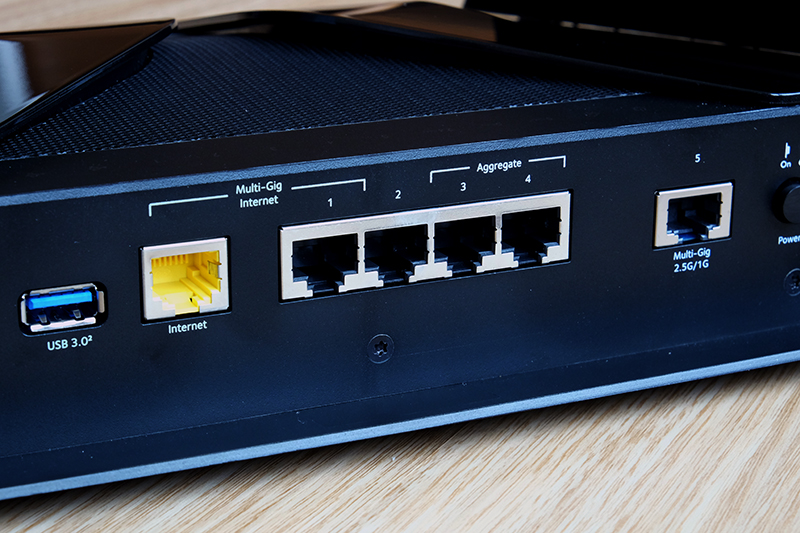 Round the back are all the ports. There are two USB-A USB 3.0 ports which can be used for print and file-sharing, a single Gigabit Ethernet WAN port, and four Gigabit LAN ports. There’s also a single Multi-Gig Ethernet WAN port that supports speeds of up to 2.5Gbps. To enable users to maximise the fast wireless speeds, the Netgear Nighthawk RAX200 supports port aggregation. You can use the WAN port and one of the LAN port to create a 2Gbps WAN connection. You can also use two of the LAN ports to create a single 2Gbps LAN connection. The flexibility is much welcomed but I think most users would also like to see more than four LAN ports so that they can connect more devices to the router. 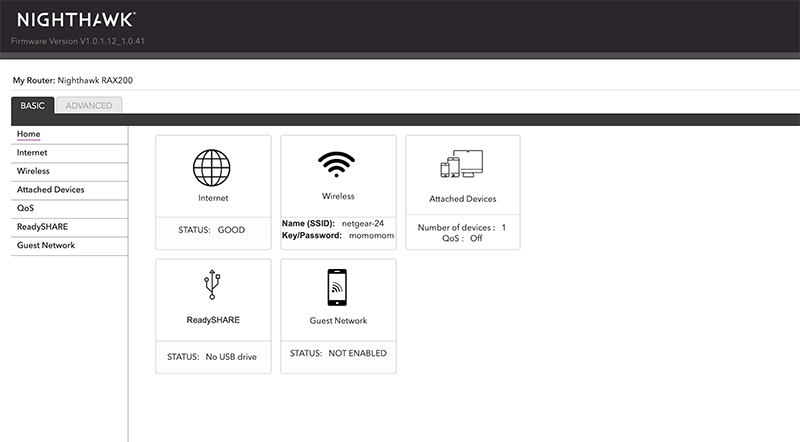 The Netgear Nighthawk RAX200’s router management interface is clean but also powerful. For most users, the Basic menu would suffice. It lets you set up your wireless networks, QoS, and even ReadySHARE, Netgear’s file and printer sharing feature. The Advanced menu is for those who want to tinker around with settings like Wi-Fi transmit power, disable/enable Wi-Fi 6, port aggregation, remote file sharing, and VPN connections.

The biggest letdown with the Netgear Nighthawk RAX200’s router management interface is its clumsy parental controls system. Unlike its rivals, it’s a blanket setting that applies to all connected devices. Parents, what this means if you want to prevent your children from using the Internet from say, 9pm to 9am, every device in the household will be blocked. 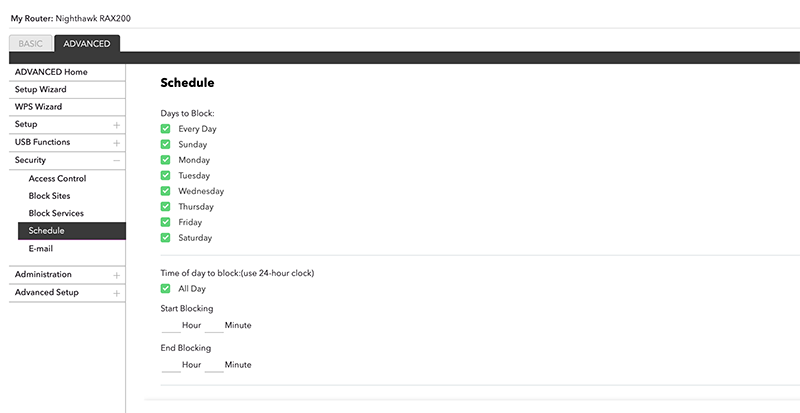 Furthermore, you can only set a single start and end time. This means you can only specify a single block of time every day where Internet access is restricted. You can’t specify two periods of time like 8am to 10am in the morning and 8pm to 12pm at night. It has to be one block a day.

You have the option to block specific devices, but that option doesn’t allow for scheduling. So if you want to block your kid’s iPad, you’ll have to go into the settings to do it and then return when you want to restore connectivity. 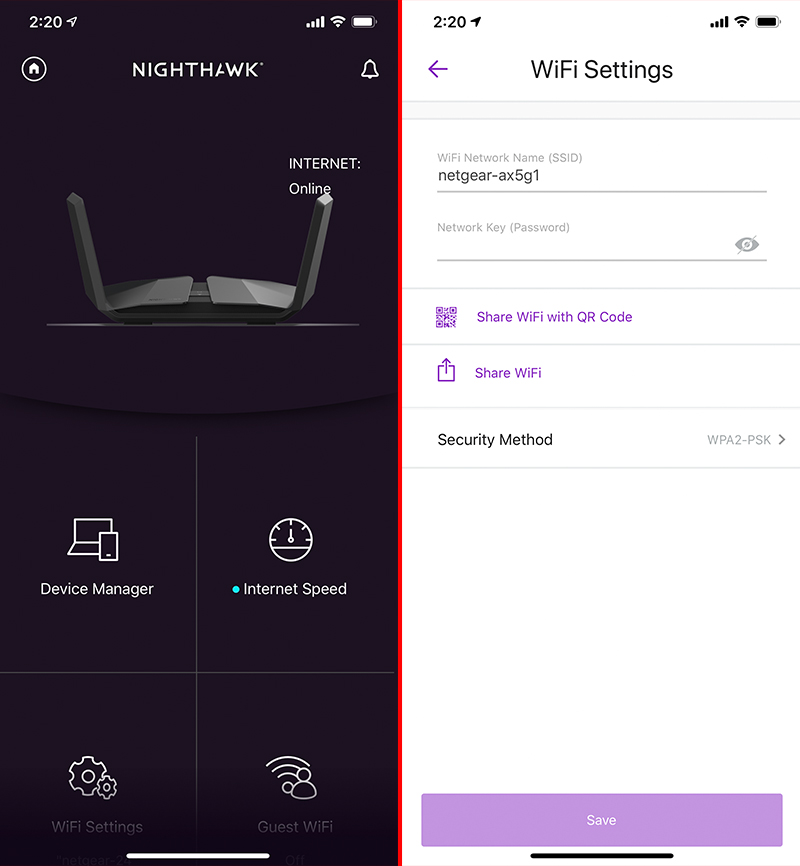 You can also remotely manage the Netgear Nighthawk RAX200 using the Nighthawk app. But the app itself is pretty basic, you can manage your wireless settings, share Wi-Fi passwords, do a speed test, and see what devices are connected, and that’s about it.