Buying advice: Why your next notebook should have a USB4 or Thunderbolt 4 port

Buying advice: Why your next notebook should have a USB4 or Thunderbolt 4 port

Note: This feature was first published on 27 January 2022. 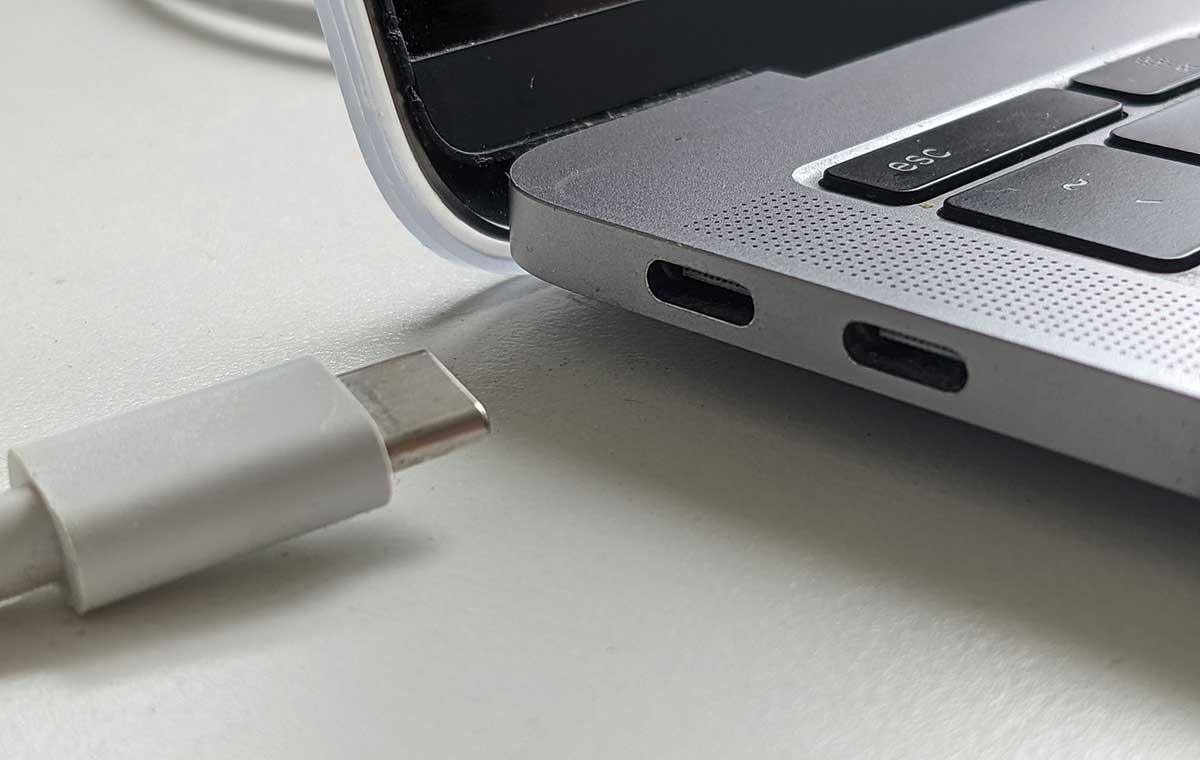 With the proliferation of the USB hardware comes the confusion of what the near-universal connector can do, especially with USB-C and USB-A connectors, 2019's introduction of the new USB 3.2 specification and its impact on the labelling for past USB standards like USB 3.1 and 3.0.

And then there’s Thunderbolt, which was a joint effort by Apple and Intel. Despite having wildly different speeds than regular USB, Thunderbolt 3 uses a USB-C connector, which is shared by regular USB standards.

So when the USB Implementers Forum (USB-IF), the consortium managing USB, introduced the new USB4 spec in 2019, and Intel unveiled Thunderbolt 4 the next year, you’d be forgiven for rolling your eyes. Life's too short to have to understand yet another convoluted data transfer standard.

But there's a silver lining. As both USB and Thunderbolt converge on the '4' label, the new standards present an opportunity rarely seen in the world of technology: it may make things simpler for the consumer, and it may be something to look out for in your next notebook purchase.

USB4 and Thunderbolt 4, and what they improve upon

To start, here's a primer on what exactly USB4 and Thunderbolt 4 are, and what they offer over their older versions.

USB4 is the successor to the previous USB 3.2 standards. More specifically, it comes in four flavours, but the ones that will matter most to consumers are USB4 20Gbps and USB4 40Gbps, with the 'Gbps' suffixes referring to the maximum data throughput of the USB4 device in question.

The most salient part about USB4 as a whole, however, is that it's based on the Thunderbolt 3 protocol, a move possible thanks to Intel making Thunderbolt 3 royalty-free. This allows USB4 to see an increase in maximum throughput rate (if your USB connector spec matches USB4 40Gbps), the ability to drive two 4K or one 5K display, and power delivery of up to 100W. 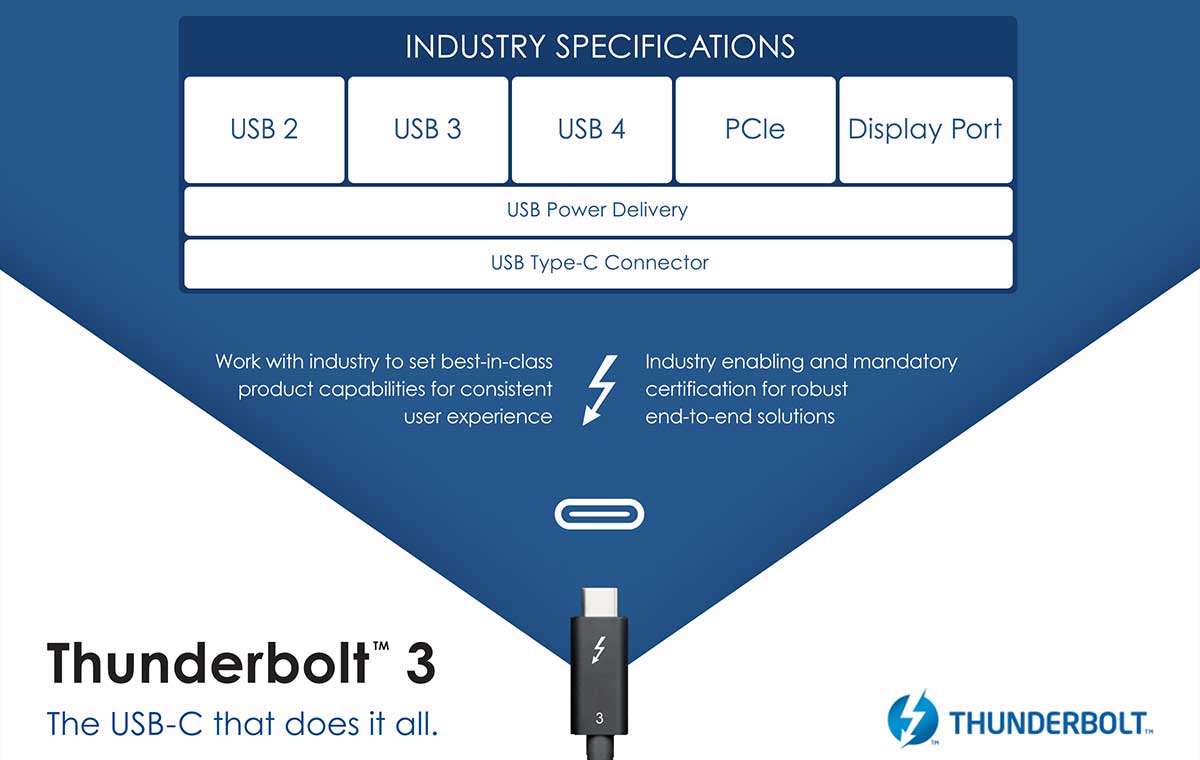 Essentially, the cap on data transfer speeds is higher, and it's also backwards compatible with older USB standards. USB4 is also optionally compatible with the actual Thunderbolt 3 standard, which makes muddles things a bit, though we'll touch on that later.

As for Thunderbolt 4, the improvements over Thunderbolt 3 are less pronounced. Maximum bandwidth stays the same at 40Gbps, but data transfer speeds over PCIe have been doubled to a minimum of 32Gbps, minimum display support is bumped from one 4K display to two, and it follows the USB Power Delivery standard. As an added bonus, backwards compatibility with Thunderbolt 3 is also assured. 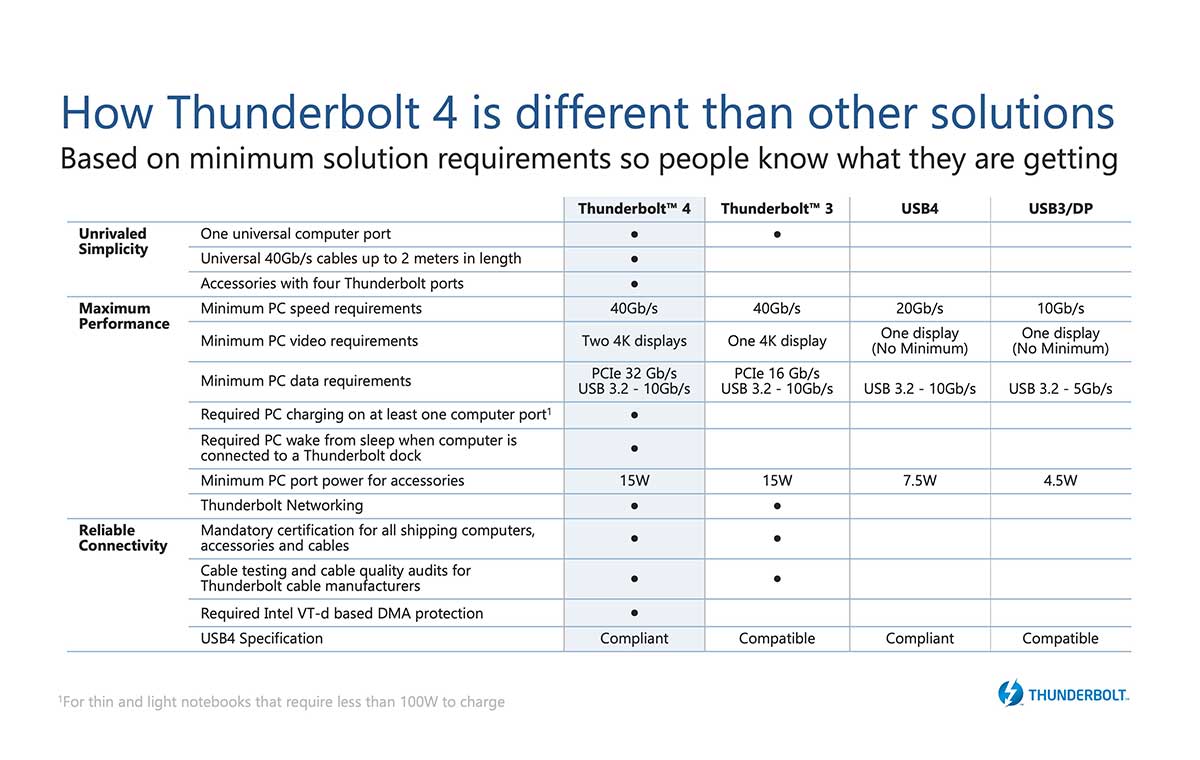 But perhaps the most important quality of Thunderbolt 4 is that mandates support for USB4. And the reason that's important is because of how confusing USB can be.

The confusion of USB, and why USB4/Thunderbolt 4 matters

Since its introduction in 1996, USB, or Universal Serial Bus, has wound up replacing older serial ports and DIN connectors like the PS/2 port, living up to the 'Universal' in its name.

Yet, while USB is much more preferable to having a bunch of different ports non-compatible ports in each device, it can sometimes be almost as bewildering.

You can refer to an older guide that we did here for further clarification. If you find it all confusing, don't worry, you are not alone.

The gradual consolidation of USB hardware to USB-C doesn't help, either. Mass adoption of USB-C means it is possibly the only cable you'll ever need to carry, but on the flip side, it's made it so that you can't tell what exactly your USB-C cable or port can do, such as whether it supports data transfer, video output, charging, or all three. For example, the USB-C ports on some notebooks can only handle data and cannot be used for charging. And on some others, they handle most data but not video – so you can use it to output to an external display. 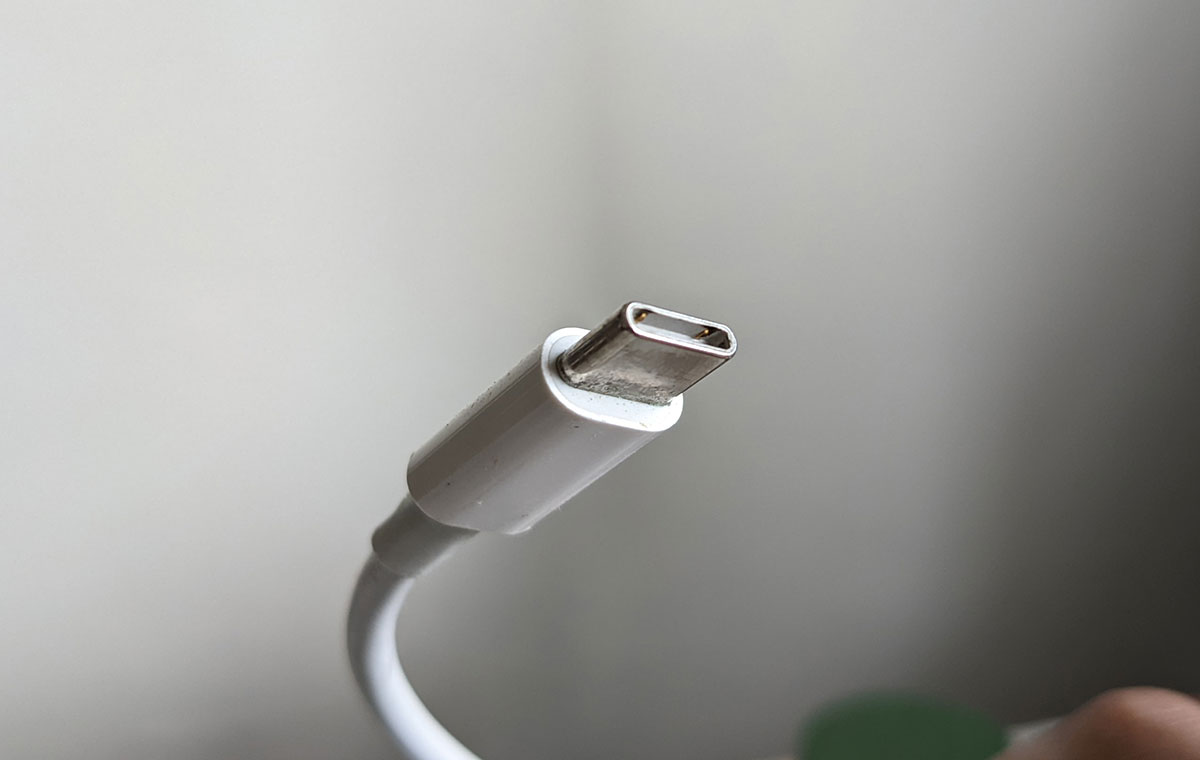 That's why a Thunderbolt 4 port on your next notebook is important. On top of support for Thunderbolt, it also guarantees support for USB4, which means you no longer have to worry about what it can do because it likely supports all USB and Thunderbolt features.

As for USB4? Well, most notebooks today that have USB4 ports tend to support Thunderbolt 4 functionality as well. We haven't seen one that has one and not the other. So for now, USB4 support is just as good.

But ports are only half the equation. It's also up to the cable you're using. Thunderbolt support requires Thunderbolt cables and there are all manners of USB cables. Some USB cables support data but not power, or data but not video.

USB hubs are another potential area of confusion, as the hub is now a bottleneck. You can plug in a USB 3.2 Gen 1 hub into a USB4/Thunderbolt 4 port, but you'll be limited to USB 3.2 Gen 1 speeds, for example. Additionally, Thunderbolt 3 support is mandatory for hubs that profess to support USB4.

You do get a bit of help with labels on packaging when you're in the act of purchasing a cable or hub, but the packaging is only helpful if it's not already thrown out. It's worth noting, though, that the USB-IF does have logos meant to be placed on ports and cables, shown in the table below.

Additionally, there's also USB4's optional compatibility with Thunderbolt 3 to consider. While USB4-only ports are still rare, as their prevalence increases, you'll have to look out for whether USB4 ports on a cheaper notebook will support a Thunderbolt accessory of any kind, and whether it supports a bandwidth of 40Gbps or 20Gbps.

All in all, when you're looking around physical and digital stores for your next notebook either now or a few years down the line when USB4 and Thunderbolt 4 technology become less exclusive, it may be prudent to list these standards as a priority. It may just up your quality of life a bit when it comes to using your laptop.

Lastly, here's a list of notebooks that we've tested recently that came with USB4 and Thunderbolt 4 ports. This list is not exhaustive, of course.