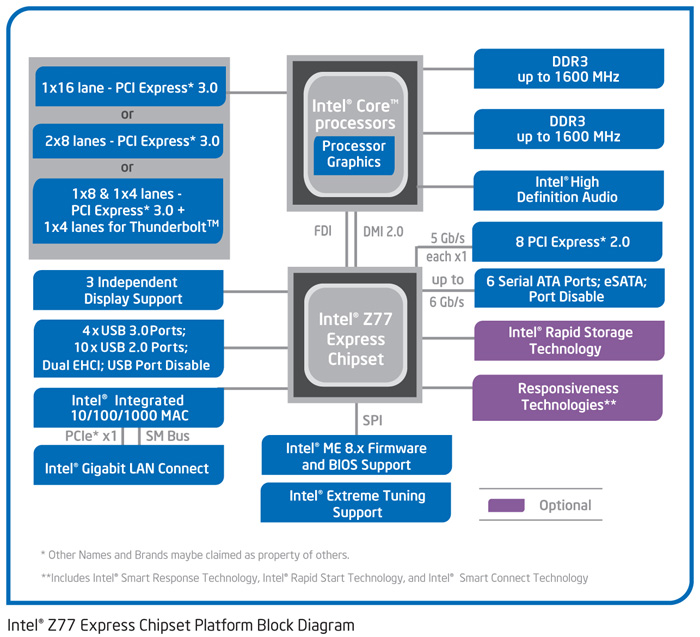 Following in the footsteps of Sandy Bridge, the launch of Ivy Bridge will also see Intel introducing the new 7-series chipset, codenamed Panther Point. The new 7-series chipset is an incremental update to the Z68 chipset from last year and uses the same 65nm manufacturing process technology and supports LGA 1155 package processors just like Sandy Bridge. Intel will be introducing three new chipsets targeted at consumers, and they are the Z77, Z75 and H75. The three chipsets have highly similar features, but are a little different.

Mainly, the Z77 and Z75 will both support CPU performance tuning (basically overlclocking, which the H77 doesn't), hence making it the choice for tweakers. Meanwhile, between the Z77 and Z75, the former will support RAID and Intel Smart Response Technology (using a small SSD as a cache to boost system performance of a primarily hard drive driven machine) while the Z75 doesn't support these extra frills. The H77 chipset supports RAID and Intel SRT technology, but only supports GPU tuning and a single PEG slot support.

The Z77 chipset is targeted at enthusiasts and that’s the one we’ll be taking a closer look at later, while the Z75 and H77 will cater to more mainstream users. Further on this page, we touch upon a few platform aspects of the 7-series motherboards right after the chipset comparison table. 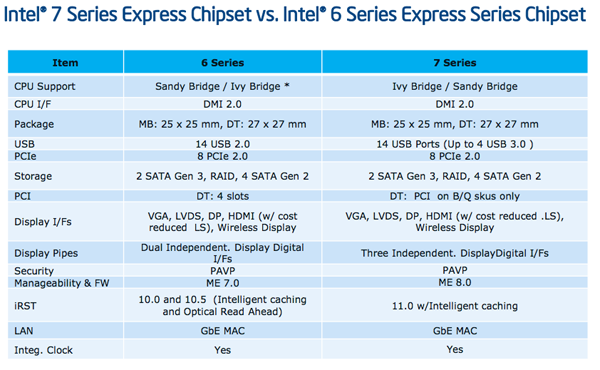 Sandy Bridge processors on the other hand are fully compatible with either the full series of 6-series and the new 7-series motherboards.

The headline feature in the 7-series motherboards is the integration of a USB 3.0 controller into the chipset. The controller supports up to four USB 3.0 ports, which should suffice for entry to mid-range boards, and will go some way to cut costs (making boards more affordable for users) and also free up real-estate for manufacturers. For higher-end boards which typically feature six USB 3.0 ports or more, an additional third party controller will still be required.

Thunderbolt is the latest interface for connecting peripherals to a computer. Developed by Intel in collaboration with Apple, it is a super high-speed interface capable of up to 20Gbps of data throughput (considering bidirectional transfers), which is many times faster than USB 3.0 and FireWire 800. Furthermore, apart from data, ThunderBolt also supports video, audio and even power, thereby reducing the need for separate video and audio cables.

However, despite obvious benefits of ThunderBolt, the new 7-series does not natively support ThunderBolt. However, motherboard manufacturers can choose to implement it at the expense of four PCIe lanes via the chipset or CPU. Intel says this is entirely up to manufacturers, but they do expect boards to sport ThunderBolt ports, but these will be enabled by third-party controllers. With limited Thunderbolt hardware available at this point of time, we've not yet seen 7-series boards implementing this features and we expect such designs to be available later in the year. After all with no chipset-level implementation currently, it is as good as you personally buying your own add-on Thunderbolt PCIe card to support any Thunderbolt enabled device.

Some Initial Thoughts on the 7-series Chipset

Overall, the 7-series chipset marks a minor improvement over its predecessor. Native support for USB 3.0 is much welcomed, but we are a bit miffed that PCIe 3.0 speeds are enabled only with Ivy Bridge processors as the additional PCIe lanes from the chipset are only PCIe 2.0 compliant. Also, the new 7-series chipset continues to support only two SATA 6Gbps ports and four SATA 3Gbps ports, which is disappointing considering AMD’s 990FX chipset already offers up to six SATA 6Gbps ports on its own. Lastly, not incorporating native support for ThunderBolt technology into the chipset is yet another shortcoming of expectations for the new 7-series chipset. Considering the numerous benefits of this new technology and how psyched Intel were about it, we are both surprised and disappointed that Intel didn't take the opportunity to make the push for ThunderBolt to be incorporated on all new Ivy Bridge machines from the chipset level.