Ivy Bridge represents Intel’s third generation Core processor family and architecturally, it is highly similar to its predecessor. Ivy Bridge is still a monolithic die that features an integrated graphics processing unit, but built using a 22nm manufacturing process that employs Intel's recently introduced 3D Tri-gate transistors. Typically with a shrink in manufacturing process technology, one can expect slightly boosted performance and better power efficiency, and in this respect Ivy Bridge is no different. 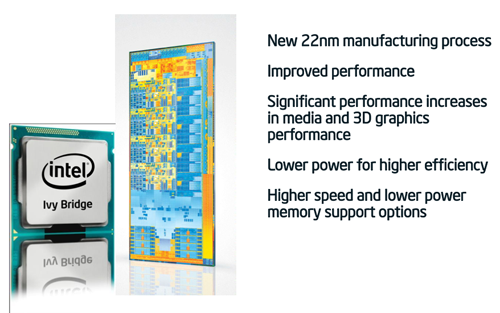 However, as with previous “tick” cycles and since architecturally Ivy Bridge doesn’t differ much from its Sandy Bridge, performance improvements are expected to be modest. In our tests, we found that depending on what application you are running, you can expect an average of about 10% boost in performance.

On the performance front, Intel has introduced a number of features that will please enthusiasts. To begin, Intel has raised the maximum CPU multiplier for unlocked Ivy Bridge processors - from 59 to 63. This suggests an even higher level of overclockability. Also, unlocked Ivy Bridge processors will also allow users to adjust the CPU multiplier in real-time from within Windows - a convenient feature but probably limited in use since safely booting into the OS is a necessary stress test for any overclock. Lastly and unfortunately, base clock overclocking will remain the same as Sandy Bridge with only limited adjustments of +/- 10MHz allowed due to the platform and chip design. The memory controller in Ivy Bridge has also been improved and will be able to support faster memory up to DDR3-2667MHz DDR to better overclock the system - up from DDR3-2133MHz. Official memory support would however be DDR3-1600MHz.

You can read up more on performance matters in a separate dedicated Ivy Bridge performance article where we've covered in detail how the top processor variant fared - the Core i7-3770K. On a related note to performance, the new Ivy Bridge processors also support several updated instruction sets introduced on the SB-E processors but not present on the original Sandy Bridge series such as AES, AVX, SSE 4.1 and SSE4.2 among others.

As for power efficiency, thanks to all-new Tri-gate (3D) transistors technology, Intel claims that at any level of performance, the new chips will consume less up to 50% less power. Briefly, these transistors employ a single gate stacked on top of two vertical gates (hence 3D), and allows for up to three times the surface area for electrons to travel. This reduces leakage and allows for up to 37% faster transfer speeds and considerably lower power consumption. Other efficiency improvements include power gating on memory and graphics controllers for lower idle power and also support for low voltage DDR3 memory on mobile variants of Ivy Bridge.

A Focus on Graphics

In recent years, there is an increasing focus on the importance of GPUs. Previously, GPUs used to be the domain of gamers alone, nowadays however, the responsibility of the GPU is becoming increasingly varied. Now, they are called on to accelerate HD video, user interfaces and now even certain applications, and that has led to a radical change in Intel’s strategy as they seek to improve on their own graphics offering.

With Ivy Bridge, the GPU section of the chip will be upgraded with the new third-generation Intel HD Graphics engine - the HD 4000 and HD 2500 integrated GPUs. Headlining the new features of the HD 4000 and HD 2500 GPUs are the inclusion of DirectX 11, DirectCompute and hardware tessellation support. The new integrated GPUs will also support OpenCL 1.1 and OpenGL 3.1. 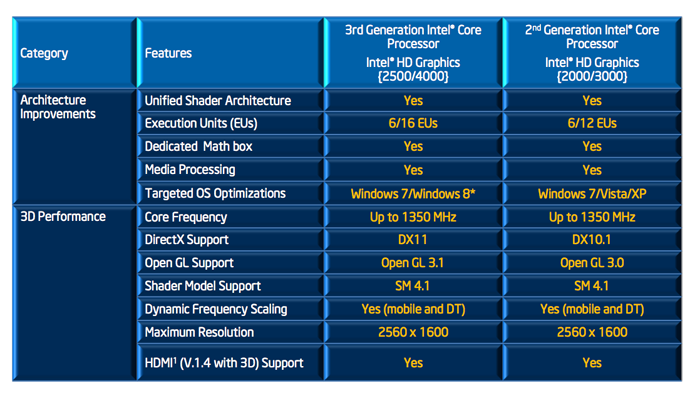 The more powerful new HD 4000 GPU will be offered on the higher-end SKUs and it will have 16 execution units (EUs) - four more than the older HD 3000. While that might not sound like much, these EUs are much more efficient that its predecessor. A single EU on Ivy Bridge can perform two MADs (multiply + add operation) per clock, twice that of the EU on Sandy Bridge. In raw computing terms, the HD 4000 will have more than twice the compute power of the HD 3000 and this is why Ivy Bridge is expected to dramatically improve graphics performance just as we've found out. Also, since each EU is now more efficient, even the HD 2500, which has the same number of EUs as the older HD 2000, is expected to offer noticeably more graphics performance.

Intel Core i7 processor will feature the HD 4000 GPU, while Core i5 / i3 processor series would feature a mix of both HD 4000 and HD 2500 GPU variants depending on the processor model and target user group. For example, as listed on the previous page, Core i5-3550 and 3450 are equipped with the Intel HD 2500 GPU while the higher speed versions come with the HD 4000 GPU.

With Ivy Bridge, Intel is also natively supporting up to three displays for the first time. So apart from the main display, you can also have either an additional two digital displays or one analog and one digital display. However, support for this will invariably depend largely on the manufacturer's motherboard/notebook design.

One aspect of the Intel HD 4000 graphic engine that we've reported in the past but wasn't quite addressed in the official launch of the Ivy Bridge is its support for 4K video resolutions. Given that this information is from Intel's own Developer's Forum, we believe the HD 4000 might support this resolution natively but wasn't mentioned since displays with such resolution support are few and far between, and are priced well out of personal and even many businesses' budget. However it has been noted that Kirk Skaugen, VP and GM of Intel's PC Client Group has mentioned support for "Retina" display resolutions when OEMs choose to support that. Since there's no fixed display resolution defined for "Retina" displays and it differs from each product group, it's not yet very telling as to Intel's real intentions, but it does seem to suggest something higher than the official 2560 x 1600 pixels resolution support. Apple's new product refreshes in the months ahead might shed some light on this.

Just to set some basics right, PCIe 2.0 support 5GT/s (gigatransfers per second) signalling per PCIe lane. PCIe 3.0 ups the ante with its 8GT/s support. However, because PCI 3.0 employs far more efficient encoding schemes (scrambling via binary polynomial with 128b/130b encoding vs. the 8b/10b encoding schemes of PCIe 2.0), it is able to reduce transfer/communication overheads from 20% to just 1.5%. The combination of increase signaling speed with far reduced overheads enables PCIe 3.0 to actually support double the bandwidth per lane than PCIe 2.0 (1GB/s vs. 500MB/s).

PCIe 3.0 is probably one that would make itself most useful when tackling multi-GPU setups, which we'll find out in due time if it really made a difference. In our preview of ECS’ high-end Z77H2-AX board, we saw that 16 PCIe lanes is sometimes not even enough for the most demanding users as that particular board has an additional PLX PXE 8747 switching chip that increase the number of PCIe lanes to a whopping 32! This would come in handy to run two-way or three-way SLI/CrossFire configurations more effectively as there is more bandwidth available than just the basic PEG support from the CPU.

With Ivy Bridge, Intel is also hoping to make PCs more secure and safe for use. Intel OS Guard or SMEP (Supervisor Mode Execution Protection) provides a disable bit that serves as an enforcement mechanism whereby the OS can indicate a requirement that it does not intend to execute from user mode pages while in supervisor mode and thus the CPU enforces this requirement. What this means is that SMEP helps prevent certain malware attacks from executing from user mode pages while tricking the OS to be in supervisor mode which would allow access critical and sensitive areas that only the OS should only have access to. Intel OS Guard is enabled by a supporting OS and does not require any additional software. The next iteration of Windows will support this feature. Other major Linux distributions such as Ubuntu, Red Hat and SuSE have also plans to support Intel OS Guard.