As we can see, Ivy Bridge and the new 7-series chipset are mostly incremental updates. On the processor front, Intel is obviously taking graphics more seriously now, because Intel has bestowed Ivy Bridge with a substantial GPU upgrade (relatively speaking). Not only does the new HD 4000 and HD 2500 GPUs possess more execution units (EU), each EU is also more efficient, and we should therefore see a notable increase in graphics performance. That aside, it is also evident that Intel remains committed to offering efficient computing solutions, as can be seen with the implementation of their all-new Tri-gate transistors and support for low-voltage DDR memory. And with the new 7-series chipset based platforms, we finally have integrated USB 3.0 and PCIe 3.0 support. 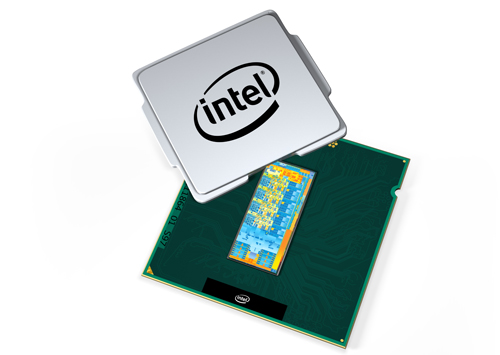 However, it’s not all rosy for Ivy Bridge because despite the beefed up GPU, AMD’s Llano APU’s Redwood-class integrated GPUs are still competitive. Furthermore, with AMD set to release their Trinity APUs later next month with even better computing and graphics processing, the Intel HD Graphics 4000 could yet find itself comprehensively outclassed (at least from a graphics performance standpoint). That said, Intel should likely still boast superior CPU performance, but really, it just goes to show how much catching up Intel needs to do in the graphics department. Elsewhere, while PCIe 3.0 is supported, that feature is enabled only when paired with an Ivy Bridge processor. And finally, we are disappointed that the 7-series chipset still supports only two SATA 6Gbps ports and does not include native support for ThunderBolt technology.

What’s Right For Me?

Having covered in some depth the what Ivy Bridge and the new 7-series chipset offers, now let’s take a look at the SKUs that will be available at launch. Now the 7-series chipset based motherboards have been made available earlier this month and should already be available in stores now - reason being they are backward compatible with Sandy Bridge processors and don’t need Ivy Bridge ones to run.

The Ivy Bridge processors, on the other hand, are only available from today. At launch, Intel will only be making quad-core SKUs available, in both standard and low-power variants - the low-power ones are mostly geared towards AIO, OEM applications and users with certain stringent requirements (not shown below). The five main SKUs that consumers are going to want are the following:

And this is our recommendation processor and motherboard combination:

Judging from their clock speeds and price, the five SKUs that are available are pretty high-end parts, but for enthusiasts who want to get their hands down and dirty and tweak their systems for maximum performance, the two unlocked processors (marked by the ‘K’ suffix) are the obvious ones to get. The raised limit on the CPU multiplier coupled with the support for faster memory should see enthusiasts reaching new and higher levels of performance. For those who can forgo Hyper-Threading, the more affordable Core i5-3570K processor looks to be a good pick.

For those of us who have no wish of overclocking our processors, the Core i7-3770 is the one to go for if you want the utmost performance and if the budget allows. For more mainstream users, the two more affordable Core i5-3450 and Core i5-3550 are good choices but still not ideal. This is because while they have substantial CPU performance, they lack the more powerful Intel HD Graphics 4000 GPU; this means discrete graphics is almost definitely a must if you want to indulge in any semblance of gaming.

As for choice of chipsets, enthusiasts and those seeking ultimate performance should opt only for the Z77. For those who can forgo support for RAID and Intel's Smart Response technology, the Z75 is a choice pick. The H77 is ideal for mainstream and casual users who would like to capitalize on RAID and better system response with Intel SRT, but see no reason for overclocking tweaks or having muli-GPU support.

Before we end, Intel has said that more mainstream dual-core Ivy Bridge processors are in the pipeline and should be early in early June. Also, be sure to check out Part Two and Part Three of our Ivy Bridge special as we break down its performance and give our final verdict on Intel’s latest processors. Intel has also been preparing supplementary materials like this rather amusing video giving you a fly-by view of the Ivy Bridge processor's die up-close to relate various features, so check it out if you've time.