“Tick-tock” is the keyword Intel has used time and time again when introducing new microprocessors. Also known as Silicon Cadence, since 2007 it has become the strategy for their CPU business, where every “tick” is a shrink in manufacturing process technology used and every “tock” is a completely new microarchitecture. This is to avoid introducing a new microarchitecture and manufacturing process at the same time where we've seen the difficulties of managing expectations of such a complex overhaul.

With the “tock” that is Sandy Bridge, Intel introduced a completely new microarchitecture, the highlight of which must be the integration of the graphics processing unit onto a single monolithic die. Now, it’s time for the “tick” that is Ivy Bridge, which brings along all the goodness of Sandy Bridge with a few feature enhancements and primarily the 22nm process technology for lower power characteristics and a boost in performance capabilities per watt. 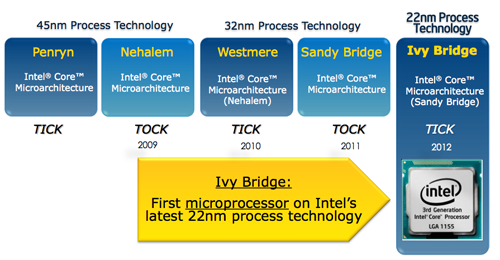 Considering the changing computing landscape, Intel is hoping to make a big impression in the graphics segment with Ivy Bridge. Graphics has been an area that Intel has been sorely weak in for the several years. Intel has for the longest time regarded integrated graphics with little interest and provided the bare minimum required to run Windows, leaving users who wanted more graphics performance to go out there and get a discrete graphics card themselves. However, the computing landscape has changed dramatically over the past few years. Apple’s iPhone and iPad brought about a boom in mobile computing, and with that, the convergence of both computing and graphics processing thereby highlighting the importance of SoCs (system on chip) where both tasks are handled by a single chip.

The need to stay relevant therefore led to Sandy Bridge, the first of Intel’s monolithic processors to integrate graphics processing elements onto a single chip. Sandy Bridge, as we detailed in our review, was a significant step forward for Intel, but graphics performance was still far from mind-blowing. With Ivy Bridge, Intel hasn’t neglected raw computing power of course; however, the highlight of the new chips has got to be the more beefy HD 4000 integrated GPU with DirectX 11 support. We'll detail more updates on the following page, but even with the new features, you should still expect baseline performance as it wasn't meant to eradicate discrete graphics.

In this article, we will highlight the key performance features of the new Ivy Bridge processor; touch on the new 7-series chipset that is optimized for the new processors; and round off with a brief guide showing you what you should be getting if you are thinking of hopping on to the Ivy Bridge bandwagon. Performance aspects of this new CPU are covered in a dedicated article. First, let's begin by talking a bit about the processor models that will be available at launch (24th April 2012).

How To Identify an Ivy Bridge Processor?

Before we head into details, how can you recognize an Ivy Bridge processor or a system equipped with it? Given that that it is now officially called the third-generation Core processor family, various systems and notebooks are still going to use the existing Core i7 / i5 / i3 logo stickers to inform which class of products they belong to. However, the dead giveaway is to notice the model number that follows the class identifier - all 37xx series CPU models (and lower) belong to the third-generation Core processor family (Ivy Bridge). This should be easy for anyone to notice, just like Sandy Bridge processors that followed the 27xx series CPU model naming nomenclature (and lower) since they were part of the second-generation Core family. Take note that 38xx and 39xx series belong to Sandy Bridge E processors; it would have been easier if they stuck with the 2xxx series naming though.

At launch time, Intel is going to have a handful of SKUs available. Of note, there will be two high-end Core i7 SKUs for the DIY market and three mid to high-end Core i5 SKUs - there's another four low-power SKUs which are geared more towards AIO and HTPC applications (which have the "S" and "T" suffixes). Of the five SKUs targeted at the usual DIY market, two will be designated with the “K” suffix, meaning that they will have unlocked CPU multipliers.

Like Sandy Bridge, only the Core i7 class of Ivy Bridge processors will have Hyper-Threading and a larger 8MB L3 cache. Also worth noting is that all of these launched today are all quad-core processors; dual-core processors (Core i3 class) will come at a later date, around late May to early June. Some basic characteristics of these lower class CPUs are 3MB of L3 cache, no Turbo Boost and no overclocking. We've a hunch that the dual-core models might go up against the AMD Trinity APU class of processors when the desktop editions become available.