What’s next for Creative’s SXFI technology? We found out at CES 2019.

What’s next for Creative’s SXFI technology? We found out at CES 2019.

In September 2018, Creative’s first iteration of their Super X-Fi headphone holography technology was made available to end users in the form of a Creative SXFI Amp that works with your existing wired headsets. Just last month, they released a wired headset that has SXFI technology built-in, the SXFI Air C. And just days ago, Creative released a Bluetooth edition of the headset for pre-order, the SXFI Air.

So it would seems like SXFI technology is steadily sprouting in various forms of Creative products, but what’s really next for Creative’s Super X-FI headphone holography?

The true measure of a technology’s success is its uptake and to that extent, Creative has plans to bring their technology to the big stage. Taking part in the ongoing CES 2019 tradeshow is a fantastic platform for media outside of Singapore to experience what Super X-FI headphone holography is all about. CES being the largest consumer technology tradeshow on the planet also makes it an ideal choice to show off their tech to other potential industry partners and secure new opportunities with their one-of-a-kind solution that recreates audio as though you are listening to speakers, but through headphones.

At CES 2019 in Las Vegas, I spoke with Creative’s CEO, Mr.Sim Wong Hoo, to get a sneak peek at what they have in mind to take SXFI tech to the next level and he was eager to show off what they they’ve been working behind the scenes to make that a possibility. Taking reference from the above photo, 1) this is the original Creative SXFI Amp that’s in retail, 2) this is new and it's a shrunken down SXFI Amp that’s ready for OEM product integration, 3) the brains of this shrunken down amp and as you can deduce, they’ve miniaturized the PCB and the components onboard to bring SXFI audio processing into a slim in-line audio controller. This is an impressive feat considering that the Super X-Fi UltraDSP processor is five times more powerful than the company's most powerful Sound Blaster chip.

In essence, Creative has made a new in-line audio control hub - dubbed SXFI Wire - with amp functionality integrated and is much smaller than the original SXFI Amp. Granted it’s no longer a standalone amp, certain functionality and circuitry are no longer required and it can be made to match the OEM's audio product and its drivers. This sets the stage where Creative can lend a helping hand to OEMs to improve their offerings through Creative’s SXFI audio tech and bring its goodness to many more people. Here’s a sneak peek and reference for OEMs to product-ize the SXFI tech:- 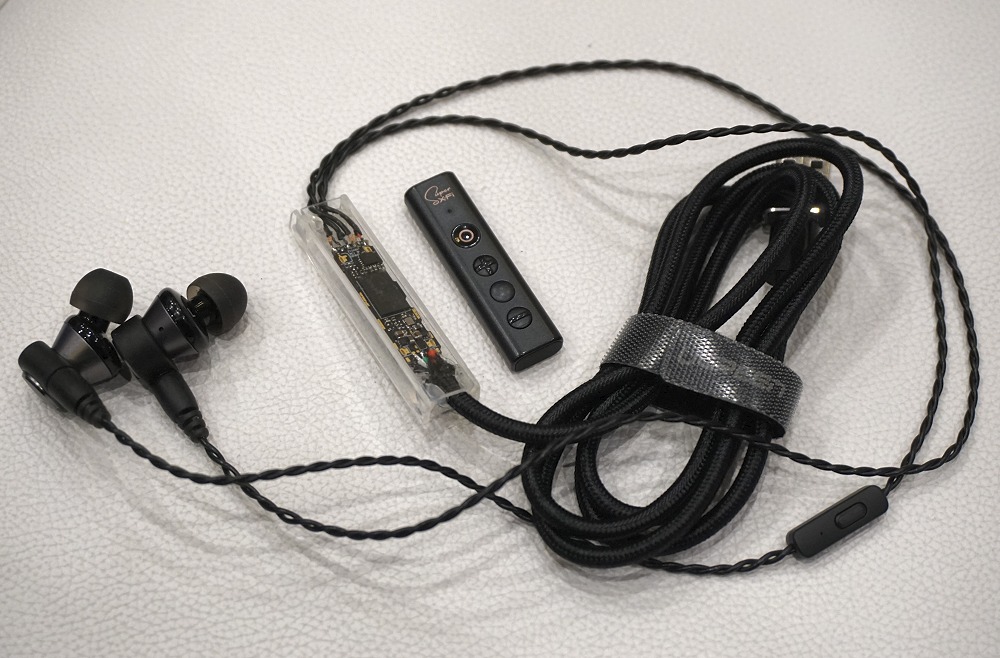 While the look and feel of the SXFI Wire (in-line audio control hub) and how it functions is really up to the OEM, the real sauce is what’s underneath the case. Creative just made a mock of how it might look if they were to do the same with their own headphone products. When asked if they would consider this route to refresh their headphone and in-ear offerings line-up, Mr.Sim said it is a possibility in the future, but they are not pursuing that route for now as they’ve products like the SXFI Amp to accord more flexibility for the time being.

As Creative celebrates their 30th anniversary this year, it looks like they could possibly enter a new golden age of powering consumer audio products through licensing deals to OEM makers and various other industries, just like they’ve been the driving force of computer audio when ushering in the age of multimedia computers in the 90s.

Meanwhile, Creative has even more SXFI products that will enter the market later in 2019.